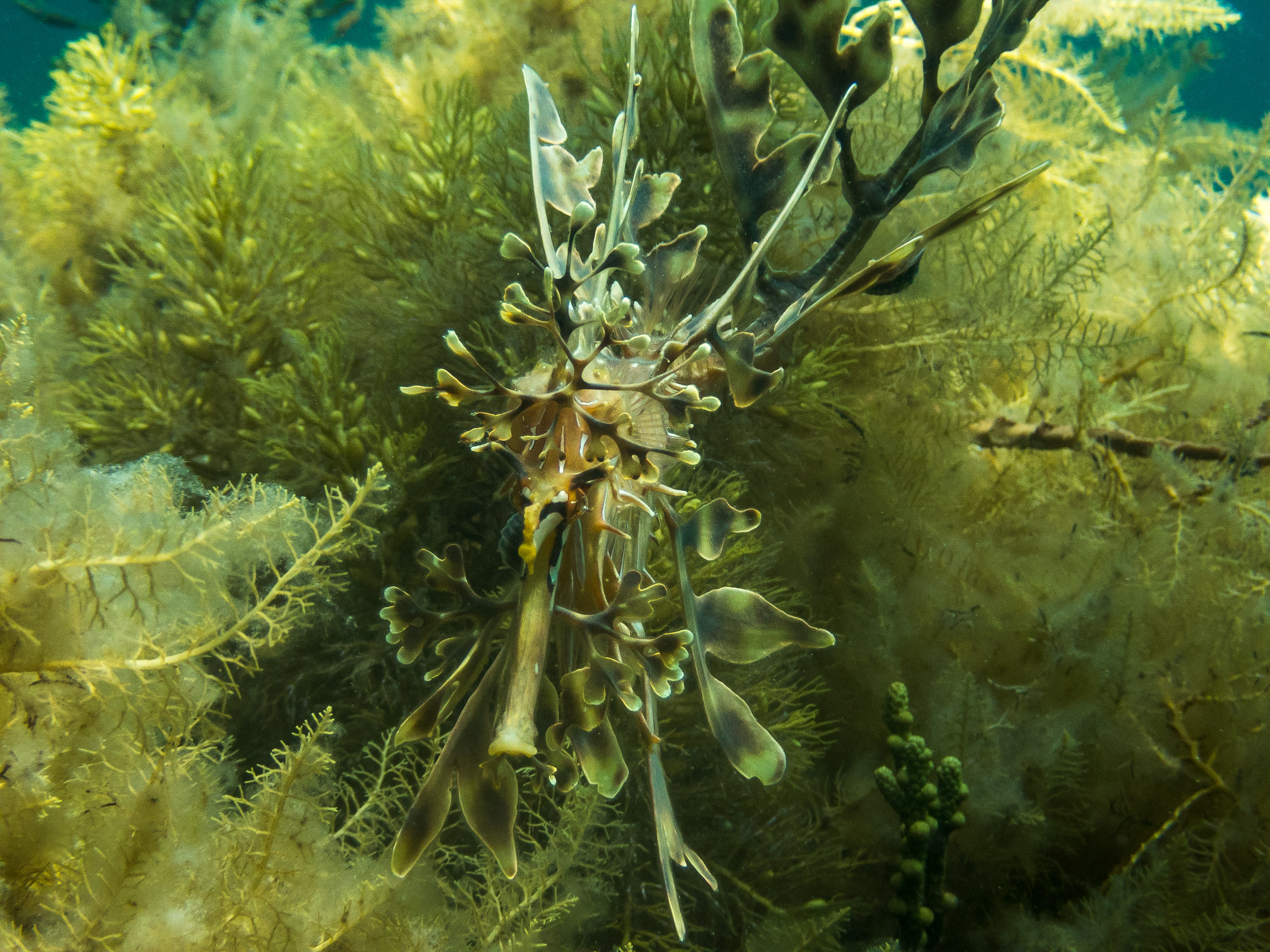 Diving With Dragons in Australia

A scuba diver in search of Australia’s elusive sea dragon struggles to make sense of everything he’s seeing below the water.

Water, almost black at this angle, leaks into my boots. Above, rugged-up fishermen line the jetty, their rods hanging limply from their shivering hands. Their lines drift westward, in the direction of my destination: the old jetty. The current would carry us towards the rusted pylons. The journey back would be a different story.

Over my shoulder, the sloping, pale-green hills collapse into a steep cliff-face of black rock, as if someone has burnt off the fraying edges of the hillside. I shiver and can’t seem to stop. The Southern Ocean had provided some of the coldest water I’d been in, even beneath multiple layers of neoprene.

A masked figure emerges from the dark water. He pulls out his regulator, revealing white teeth and blue lips.

I smile back through gritted teeth. It’s nice of the diver to pass on the tip. I should be more appreciative. But murmurings of trepidation, jealousy, and a slight fear that I could miss out begin to creep in.

“Six of ‘em. Go right at the T-junction. A few on the way out, some juveniles in-between and a big fella right at the end. Can’t miss them.”

We are on the hunt for sea dragons. Specifically, the “leafy” sea dragon: an elusive creature endemic to these waters. It had been at the top of my list since hitting the southern coastline of Australia. And Rapid Bay Jetty was the place to spot them.

Once in the water, I give the signal to my partner, Erin, and we make our descent.

We slowly fall upon a bed of seagrass. I tighten some straps, checking my air and depth before giving Erin an OK signal. She’s distracted by a small octopus coiling itself around a glass bottle. Normally, I’d be happy to sit and watch, but my priorities are elsewhere.

We communicate via hand signals — most are well-established signs in the dive community, others are more personalized movements formed over years of diving together.

This way, I signal.

The old jetty sits directly adjacent to the new jetty. The old jetty can only be accessed by swimming due to its decrepit state. In sections, bare pylons rise from the ocean like reeds in the mud.

We approach the first pylons of the old jetty. The visibility is only a few meters, the structure appearing like shadows at first. But as we get closer the rich lifeforms that cling to the pylons make themselves known. Each pylon is a collage of orange, purple, and blue corals, soft and hard, some swaying with the current, others steadfast on the large beams.

We swim at a diagonal angle to counter the current pulling us westward and out to the open ocean, doing our best to avoid hitting the row of pylons on the left side. Fighting the current would require more air, which would eat at our time underwater.

The jetty splits, one leg extending west and the other east. The tip of the T-junction is known as the “Aquarium.” It’s easy to see why. Fish life weaves in-between the pylons, which themselves have grown denser, appearing like forest trunks in a heavy fog. Leatherjackets flee the quickest, their serrated dorsal fins propelling them forward; black-and-white-striped old wives are more patient, moving slowly around the pylons as we approach. Closer to the surface, schools of herring move in unison, forming a silver-tornado that seems to swallow us whole. I swim down to stare back at a western blue devil fish, its large blue lips stuck in a permanent frown. The rest of the dive could easily be spent here, floating out and staring at all the little wonders of this biodiverse hotspot.

But then, we turn right, to the eastern wing, where the other diver had been lucky.

Here, the pylons thin out, each further apart than the last, and the aquatic life disappears almost entirely. Thickets of kelp now cling to the pylons, replacing the mess of multicolored-coral. This kelp sways with the current, painfully similar to the appearance and movements of a leafy. The leafy sea dragon is the only creature to camouflage itself by moving. As I stare longingly at every swaying branch, it’s easy to see how a sea dragon conjures this illusion.

I try to remain calm, doing my best to enjoy the dive for what it is. But with each fin-stroke, desperation creeps in.

Look. For. Seadragons, I signal to Erin, and her eyes roll behind her mask.

Then, the pylons stop appearing. We stare into an empty, blue void. The end of the jetty.

We spend the next few minutes in-between the pylons, making a final effort to spot the elusive creature. A leafy has no natural predators. Like so many others, their main threat is us, humans. Pollution and poaching have decimated their numbers, as they’re often used in alternative medicines and considered a lucrative species in the aquarium trade. I’ve heard older divers reminiscing about the days when they witnessed up to 30 at a time. Now, we search desperately for one or two.

Eventually, I notice Erin signaling that she has consumed more than half her air. I’ve done the same. It’s time to turn around.

On the journey back, I spot a cuttlefish beneath a pile of fallen pylons — a creature we hadn’t yet encountered diving. We sit and watch this alien creature, observing it changing multiple colors within the space of seconds, doing its best to blend as the light shifts around us. The disappointment of not spotting the sea dragon seems to dissipate with each passing moment of observing the cuttlefish.

The current picks up, and I have to steady myself, accidently kicking up sand with my fin. In an instant, the cuttlefish turns pale, matching the color of the sand-cloud around it, before disappearing beneath the pylons.

There is a moment of confusion. The visibility has turned poor with the changing tide, and I feel disorientated. Pylons extend straight ahead and to my left. I’d left my compass on the surface, figuring a jetty should be simple to navigate. But simple navigation on land can be a different story underwater. I can’t help but feel lost. One direction would take us back to the tip of the new jetty, where we’d surface. The other would take us out along the unexplored western wing.

Which way? I signal to Erin.

She shrugs her shoulders. Surveys her surroundings. And points straight ahead.

I think for a moment, conclude that we still need to turn left, and point left. Erin shrugs her shoulders again and points towards the surface. It’s shallow enough that we could always get a bearing on the surface and then dive back down. But my pride gets the better of me, not wanting to admit to getting lost.

We push on. I stick with my intuition, turning to our left. It’s only when the pylons start thinning out again that I realize my mistake.

We’re about halfway down the wing when I signal to turn around. Upon doing so, I see Erin’s eyes go wide and she points back over my shoulder.

And there she is, halfway up a pylon, drifting slowly.

She disappears for a moment, and I resist the urge to chase after her. We both wait, inching slowly forward. We know that spooking a sea dragon can result in it disappearing from a spot for months. A panicked sea dragon may also move up or down the water column, with sudden changes in water pressure damaging their swim bladders. It’s all about patience, letting her come to us. We slow our breathing, trying to minimize our stream of bubbles.

She comes out from behind the pylon. The leafy is adorned with gossamer, leaf-shaped appendages that flow off the body like an ornate cloak. We slowly move closer, and she continues to swim forward, the unique striped pattern on her face and golden-globe eyes now visible. We are close enough now to see the transparent fins vibrating along the side of her head, allowing her to steer and turn in the water. She glides towards us with ease, possessing a sense of infectious tranquility.

In that moment, there is no sense of accomplishment or triumph, just admiration of the occasion afforded by a simple mistake. I don’t feel the need to hunt down five more either. There are only the brief, still seconds that pass: watching, observing.

We leave the dragon as soon as she turns away from us, not wanting to chase and crowd her. Besides, our air is nearly depleted, not even enough to get all the way back underwater. We slowly make our way to the surface. It’s a long, tough swim back to the diving platform. We fight the current the whole way. But I’m not all that fussed.

Callum is a writer currently based in Brisbane, Australia. He has a passion for exploring underwater worlds, photographing the unique creatures, shipwrecks, and underwater caves he encounters along the way. When not on the road, Callum is an academic writer, researching the laws which govern human, animal, and environmental interaction.