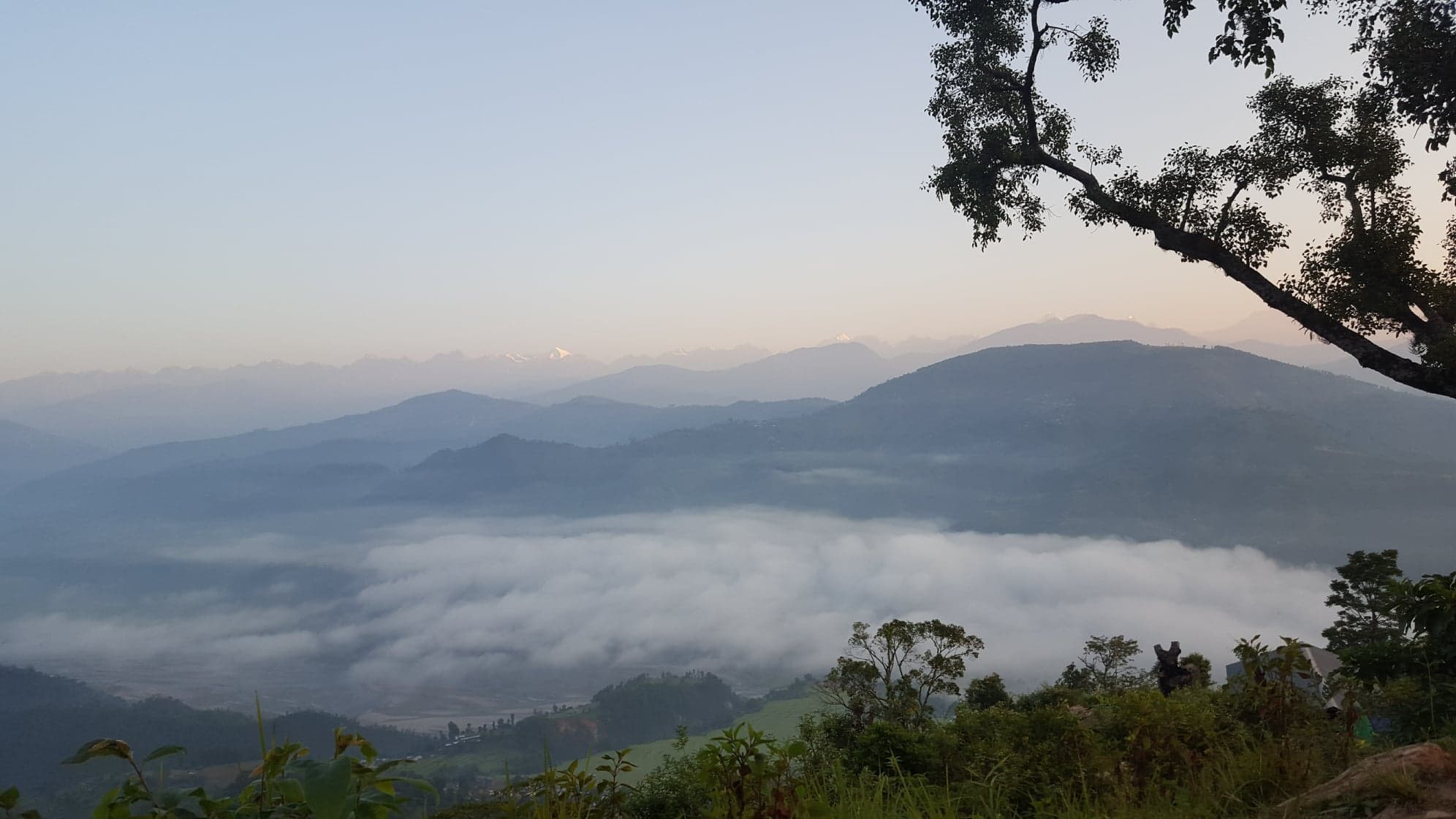 A Broken Sandal and a Buddhist Funeral in Nepal

A traveler’s search for a new pair of sandals drops him in the middle of a traditional Buddhist funeral in Chondeni, a small village in Nepal.

It is shortly after dawn when the autumn mist accompanies me on my walk up the mountain tracks, glazing leaves, petals, and grass in a light dew. From Chondeni, as with most Nepali villages, there is always another track leading up. The center of the village consists of a cluster of tin-roofed shacks, a large oak tree, and the convergence of several mountainside paths. The roots of the oak tree protrude from the earth, twisted and ungainly, and a dog is nestled within, sleeping peacefully. Nearby, a group of men sit on an uneven wooden bench, their hands wrapped around glasses of steaming chai.

It is one month since I arrived in Nepal and four months since an enormous earthquake claimed more than 8,000 lives and left an estimated 3.5 million people homeless. A humanitarian relief team, which I am part of, is rebuilding a primary school in Ganeshthan, halfway down the mountain from Chondeni. A six-day work week leaves us little time to explore, and I am keen to visit the surrounding villages.

On Sunday morning, Chondeni is serene and its people untroubled. A brightly decorated bus arrives from Kathmandu, spluttering its way up the hill. An abrasive, weathered horn signals its arrival, and it echoes through the hills, startling the sleeping dog. Shop owners, who have been awaiting its arrival, hover at the bus’s flanks, arms outstretched, waiting to catch their merchandise from the porters scampering across the roof. When all the packages are collected, the bus completes a wide U-turn, crunching its tires on the dirt path. Its aching frame sways as it heads down another road, on its way to deliver more packages and then return to the capital.

The people of Chondeni are untroubled, but I am not.

As I walk up the mountain paths, from the lower village of Ganeshthan, the plug of my sandal continues to come loose. The rhythm of my morning stroll is rudely and frequently interrupted by missteps and trips from an insubordinate plastic bud. Within eyesight of Chondeni, it fails one last time, and I arrive wearing one shoe and carrying the other. A chorus of sniggering children delight in the unusual spectacle.

At the top of the path, a tin roof shack is open. I wander over, hoping they sell sandals. Inside, packets of potato chips hang in long, perforated strips, and the countertop is covered in plastic jars filled with hard candy. An old television sits atop a refrigerator, broadcasting news from India. In the corner, makeshift wooden shelves are stuffed with plastic items also wrapped in plastic. I hold up my sandal to the girl behind the counter, flapping it to show its impotence. She smiles and pulls out a new pair from the shelves. They fit perfectly.

Srijana introduces herself as she pours a freshly brewed cup of chai into a metal cup. Her mother, Mira, who is cooking rice in the kitchen out back, enters to greet me as well.

“Namaste,” she says with a tilt of her head and hands pressed together.

Srijana tells me she finished secondary school the previous year and has been working at the shop ever since. Her two younger brothers are still enrolled, and her father, who has been working in Saudi Arabia for the past decade, is due home in a fortnight.  It is his first visit in two years.

“What are you doing in Chondeni?” she asks.

“Nothing much, just going for a walk.”

“Would you like to see my school? I can show you around?”

I finish my chai, and we set off on foot to Srijana’s school.

It is the last day of school before the Dashain festival, and the attention of students and teachers alike is waning as festival preparations ramp up. Srijana tells me the students have lost all interest in school for the moment and that the few who are in attendance amble through the gates at staggered times. They chat idly and wander through the concrete passageways without any apparent destination. Even the morning address from the head teacher feels rushed and formulaic.

The school has two temples, and both were destroyed in the recent earthquake. From the rubble of one, shards of tiles and pieces of small statues have been salvaged. A makeshift shrine encompasses the scattered parts of many Hindu gods. The half-face of a shattered Ganesh now has only one eye, the root of a tusk, and half a trunk. He is propped up next to the striking blue of Sheva’s torso. Fragments of pottery, column bases, and chunks of wall etched with inscriptions, have all been arranged in a beautiful resurrection, mirroring the strength of the Nepali people following the deadliest earthquake in living memory.

As we leave the school grounds, Srijana asks if I would like to see more of “her culture,” casually adding that her grandmother died overnight and that funeral preparations are underway.

“Ok, sure, that would be… nice?” I stutter, still unsure if I should accept or decline the unusual invitation. Srijana leads me back towards the center of Chondeni, and then we divert through a series of “shortcuts” — narrow, winding goat tracks — which are always much steeper than the regular paths. Every so often we emerge on the edge of a rice field, and I balance with all the care of a tightrope walker on slender ridges. We soon reach a small, two-story earthen house, each level barely high enough to stand inside of. Many of the surrounding homes are destroyed. Branches that previously acted as support beams protrude from the ground, and patches of grass sprout from the remains of cooking spaces and sleeping areas. Many are beyond repair, abandoned, or in the process of being torn down and rebuilt.

Inside the bottom level of the house, a dozen men are gathered, most sitting on woven mats, others leaning against wooden beams. They speak softly to one another and greet me solemnly following Srijana’s introduction. Incense is burning from all corners of the room, and it is difficult to make out the faces of those at the back.

In the middle of the floor, a white tablecloth is laid out. It is adorned with conical-shaped deities crafted from sticky rice by two of the eldest men. One of the men, dressed in purple and yellow robes, carefully pinches the top of another and smooths its edges with rough hands and a tender touch. He looks it over, using the light from an open window, and once satisfied, places it with the others. Among the sticky rice deities are small dishes filled with water, tea light candles, miniature brass ornaments and figurines, and larger dishes filled with grains of rice and money. Marigolds are sprinkled through the display and pushed into some of the deities, their vibrant orange bringing much needed color to the otherwise drab decor.

Srijana explains who is in the room, barely raising her voice above a whisper. The dead woman’s uncles, brothers, cousins, son, and more have traveled from surrounding villages and Kathmandu. The men are speaking amongst themselves as Srijana whispers to me, and she adds that they are speaking in their dialect of Thaman rather than Nepali. My ears do not detect any difference. The man in the robes sometimes speaks in a third language, and Srijana tells me she does not understand it. As I am taking in the sights, sounds, and smells of the room, I notice something else.

Behind the display of rice gods and ornaments, a figure sits slumped against the wall, covered in a white sheet. While I initially assumed it to be sacks of rice, I soon notice the outline of knees, then arms, and a head resting to one side. I turn to Srijana. She notices my realization and nods in agreement.  Colorful banners hang on the walls above the lifeless body, displaying images of the Buddha in various poses. It takes me a moment to compose myself and reassess the environment. All I wanted was a new sandal, and now I am sitting a foot away from a corpse.

When the men finish their tablecloth display, they move onto the next phase of the ritual. First, the man in the robes unwraps a stack of tattered, brown papers. On the papers are lines and lines of Nepali script, barely legible, likely due to their age and storage. He places them in a pile next to a large rice dish. Next, he unwraps an assortment of musical instruments, small bouzouki-type horns, a seashell, bugles, cymbals, and a large drum, which hangs from a rafter.  For an hour, the men play music, read from the scripts, and chant while rocking back and forth. The room fills with more and more smoke from incense, burning leaves, and cigarettes. Through the hour, many other people visit the house to pay their respects or sit in silent contemplation. Some offer money, while others join in with the music and scripture readings. Srijana tells me that this will continue all day and well into the evening.

I feel by now I have outstayed my welcome in what is a family, or at most, a community affair, and suggest that we leave and find some lunch. Srijana agrees, and we offer additional condolences as we bid farewell. I duck out of the wooden framed doorway into the bright midday sun and blink several times, adjusting to the light.  We return to Chondeni, along the goat tracks and through the rice fields. The entire way back, I am baffled, yet somehow pleased that the need to replace my broken sandal led me to a Buddhist funeral.

Stu O’Brien is a travel writer from Melbourne, Australia. He publishes a new story each month at https://www.travelonastustring.com/, drawing inspiration from his 20 years of travel through more than 75 countries.