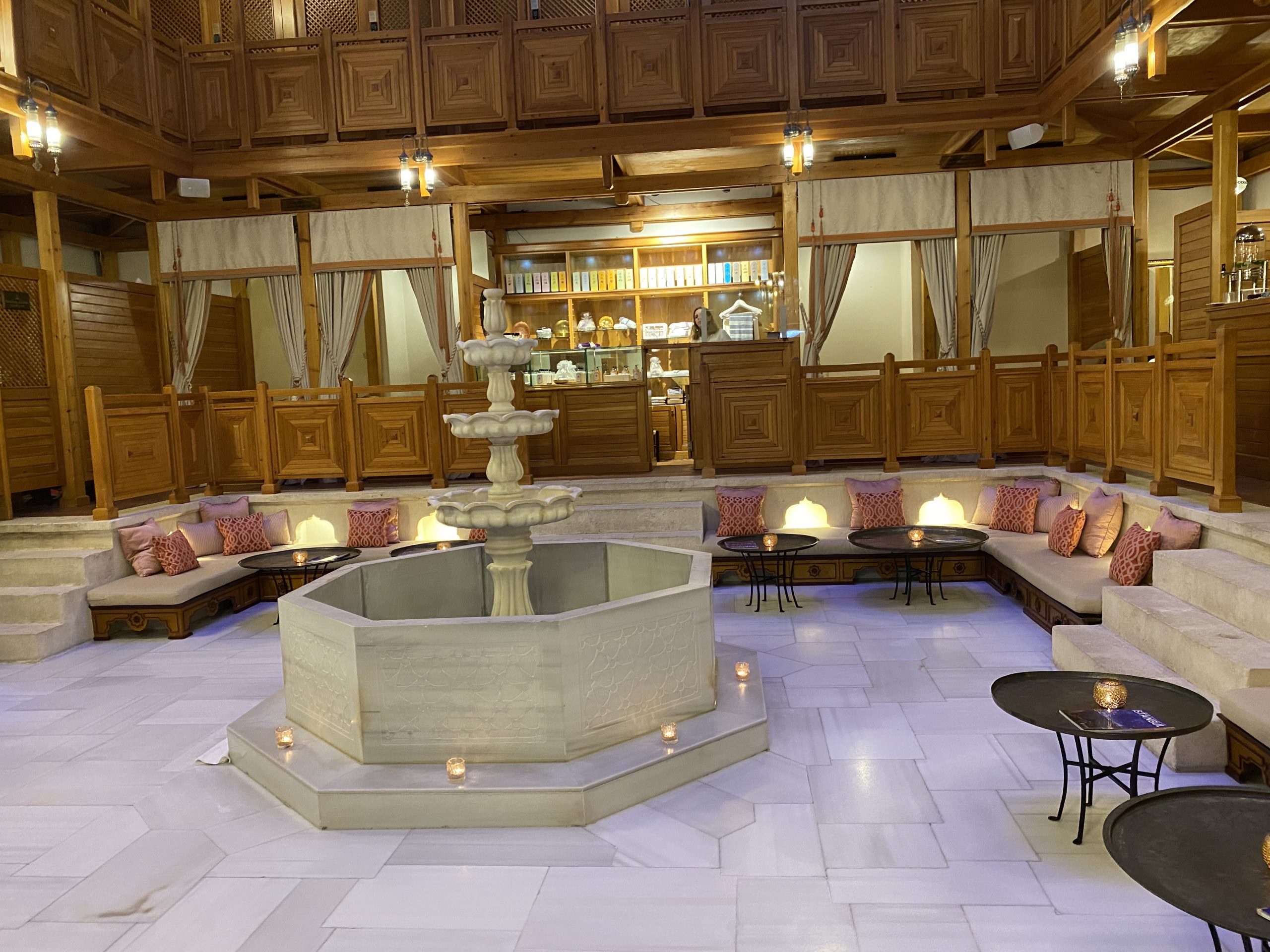 The Hamam of Istanbul

After enduring years of social isolation, a woman experiences a sense of reconnection in a Hamam, a traditional Turkish bath.

I close my eyes, lean back against the warm marble wall, inhale the heavy air, and let go. I’m wearing a black thong no bigger than a folded cocktail napkin to cover my nether region while an older woman named Ozlen scrubs my body raw with a loofa-like hand mitt. She’s wrapped in nothing more than a black-fringed tea towel, which I later learn is called a peshtamal, a hand-woven Turkish towel traditionally worn in a Turkish bath, or hamam.

I’m in the hottest quarters of a hamam in Istanbul, sharing an elaborate white marble alcove with two of my female traveling companions. After an awkward few minutes of eye-averting conversation in our nearly naked state, the steam kicks in. It creates a vapor so thick that the other female bathers in the hall — I counted six alcoves — become mere apparitions. It is then that the three of us, shrouded in a billowy white cloak of steam, ease back into our conversation.

There are three basins built into the alcove’s wall for each of us. Ozlen, my hamam therapist for the next two hours, begins the cleansing ritual by scooping up warm water from my basin with a shallow gold pan and pouring it over my body. Again, she showers me, and I feel my core temperature tick up another degree with every dousing. She washes my hair, massages my scalp, and then moves to my shoulders, torso, arms and hands, and finally, legs and feet. She continues to scrub at my body with a rough hand mitt to exfoliate my skin, removing dead cells from the outer layer to reveal the new, fresh layer hidden beneath. But the cleansing ritual is so much more than just shedding dead skin cells. It’s about letting go of the past. In a way, this moment marks the start of a new beginning.

It’s October 2021, nearly eighteen months into the plague that has swept across the world,  mercilessly claiming lives and leaving misery in its wake. Having lockdown after lockdown and months of self-isolation was a challenge at the best of times. My pandemic state of equanimity was merely a facade. Humans are social creatures who function best when connected with other human beings. My slide into perpetual isolation was so creeping that I didn’t recognize it for what it really was or what was happening inside my mind. But at this moment, sharing the alcove with two friends and three hamam therapists, I understand that my detachment during the pandemic was more likely unrecognized melancholy for the state of the world. And so, after two vaccines and three negative PCR tests, I find myself here among friends and strangers, feeling a sense of hopefulness growing inside me.

During the previous year and a half, I would have considered this level of intimacy with people I don’t know unimaginable, irresponsible, and downright reckless. March of 2020 marked an unforgettable moment in history when I realized that society was in serious trouble. So much has changed since then, and so much has been lost. Ozlen’s plastic face shield reminds me that it’s not over yet. But I can see her face, and she smiles as she takes my hand and leads me to the navel stone, a massive marble slab in the middle of the hall. Its warmth permeates from below and blankets me with comfort. It is a welcome, luxurious pleasure, and I am grateful for the experience.

Public baths were founded by the Romans. The tradition was passed on to the Byzantines and then the Turks. I thought the quintessential hamam experience would have me submerged in water. Instead, I’m lying prone on the enormous hexagon pedestal, my feet almost touching my friend’s head as she takes her spot on the stone. Ozlen rings a long white cloth over my body and covers me with thousands of tiny white bubbles. I gaze up dreamily at the dome ceiling, where shafts of steamy light illuminate the hall. At that moment, I thought this might be the closest I would ever get to the firmament. Ozlen extends her cloth repeatedly and covers me with more and more bubbles until I’m completely covered in a soapy froth.

This indulgence’s palatial pleasure and unhurried pace starkly contrast the buzz of activity beyond the hamam’s walls. The previous day, we unknowingly walked past the female entrance of Ayasofya Hurrem Sultan Hamam on a tour of the Blue Mosque and the Hagia Sophia before we plunged into the chaos and congestion of Istanbul’s famous Kapali Çaris, the Covered Bazaar. We wandered a maze of streets and explored shops, stalls, and tiny cafes for hours. We laughed at ourselves when we got lost. We slowly exhaled when we finally found our bearings, only to lose them once more. The bazaar covers about 50 acres of land. We lost our way in the labyrinth of byways again and again before finally making our way back to the hotel.

Now, Ozlen guides me gently to another area of the hamam. She works in a full-body clay mask infused with Judas tree scent, its sweet aroma lulling me deeper into serenity. The Ayasofya is a historical hamam, built in the sixteenth century classical Ottoman bath style, and is considered the most traditional and luxurious public bathhouse in the Old City. I admire the grand architecture and wonder about all the women who have experienced this transformative cleansing ritual before me.

Soon we’re on the move again, this time to a private massage room. Again, the subtle floral scent of the Judas tree soothes me, and I get lost in my thoughts. Ozlen gives me an aromatherapy face massage and face mask, followed by a head-to-toe body massage. The corporeal indulgence coupled with this stunning setting steeped in centuries of history instills a heightened sense of hope in me. I have shed the skin that endured the plague, and when I emerge from the hamam, I feel lighter, unburdened, reborn.

Judith Mackay is a curious Canadian creative and seasoned professional who writes passionately about her food and travel adventures. She credits her master's in English literature with helping her craft relevant, readable and relatable stories, even though it turned her into an obsessive bibliophile.