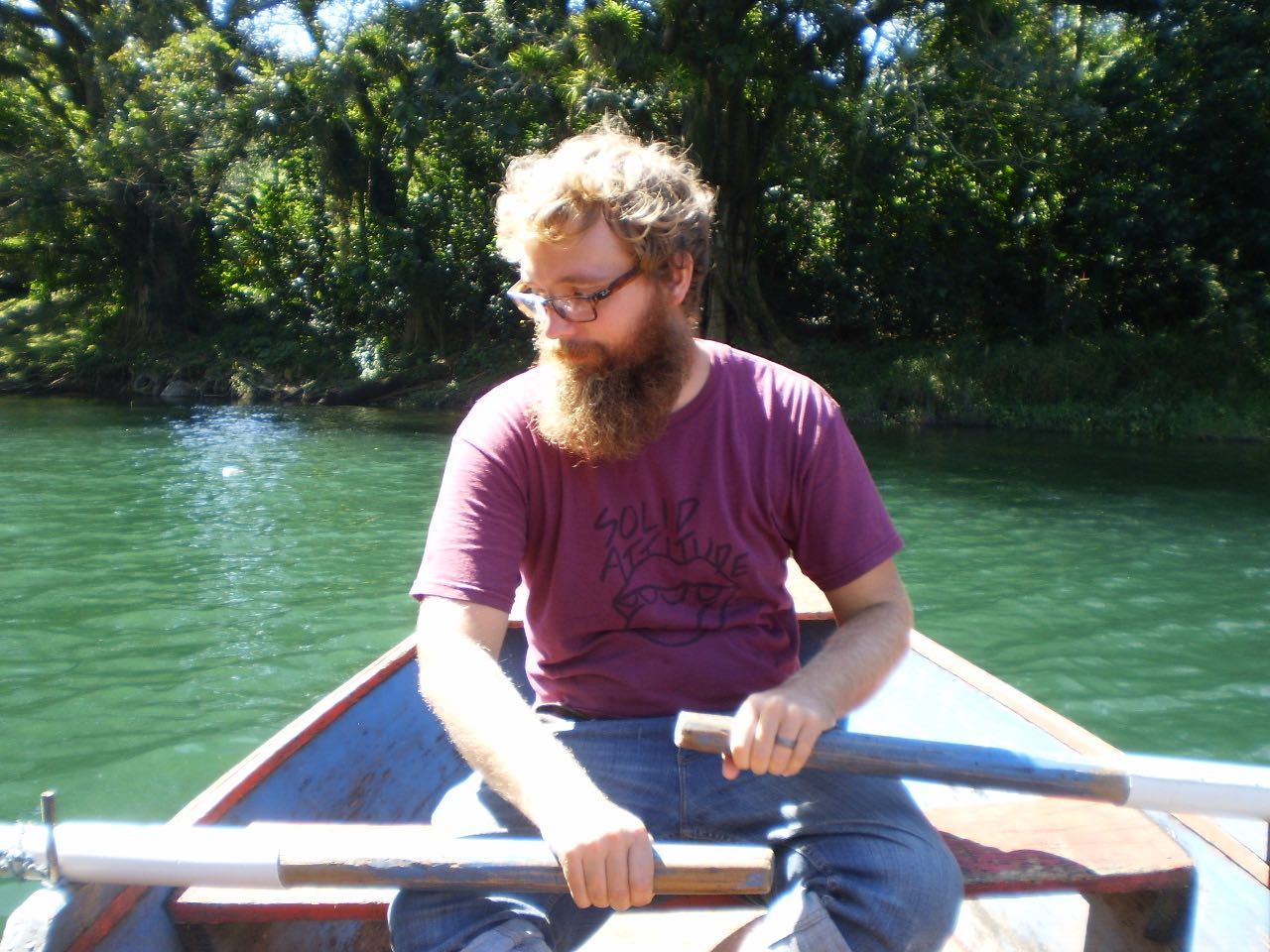 The Weed Jesus of Nicaragua

A stoned traveler in Nicaragua struggles to understand why his beard is receiving so much attention.

Memories of the five months I spent backpacking through Central America are hazy. My relationship with cannabis has shifted dramatically in the years since, but back then I smoked a lot. And memory loss wasn’t my only problem. Another major side effect of being high all the time was the pseudo-bohemian neglect of my personal grooming. This condition has been depicted in TV and movies to the point of becoming a cliché, but the stereotype exists for a reason. My hair fell over my eyes, and my beard bristled out in all directions. I wish I could say this was a revolutionary attempt to eschew bourgeois values or live some kind of wild and free Thoreauvian existence, but I’m not sure if that was actually the case. No, most of my mental energy went toward satisfying my munchies or finding a comfortable place to sit down.  The idea of stepping into a barbershop for a trim never crossed my mind. Traveling with a girlfriend might have had a positive influence on my appearance, but she was at least as psychoactively altered as I was and didn’t seem to be repulsed by what had become my signature look.

Occasionally, as we made our way north through Panama and up into Costa Rica, some little kid would spot me and shout, “Ho! Ho! Ho!” and I’d laugh along. Even if it wasn’t exactly the look I was going for, I’d rather be compared to Jolly Old Saint Nick, than to, say, Charles Manson or Grigori Rasputin. But most people seemed to pay no attention. The towns along that well-worn backpacker trail had seen their fair share of weed Jesuses. My stoned ass wasn’t anything new.

Nicaragua, however, was a different story.

Slowly, we made our way up to Granada, the beautiful city on the northeast shore of Lake Nicaragua. We spent our time wandering through the cobblestone streets, looking at old churches and colonial architecture, visiting cigar factories, and drinking coffee. While we browsed through an open-air market, an older gentleman sporting a giant black mustache stared at my facial hair and spat on the ground.

He turned and walked away, disgusted.

Jeeze, I thought. That was pretty harsh, man.

But then again, if I were from Granada and had to watch a bunch of asshole backpackers march in and out all the time, I might get sick of it, too.

Historically, Americans hadn’t been too kind to the city. In July of 1856, a Tennessean named William Walker was fraudulently elected as the President of Nicaragua. He used his power to reinstate slavery and declare English the national language, all in an attempt to create a new slave-hold colony for the United States in the years leading up to the American Civil War. He’d previously tried, and failed, to do the same in the Mexican state of Sonora and the Baja California Territory. When the Nicaraguan Civil War broke out, he’d seen the opportunity to exploit a complicated political situation; it was a second chance at achieving what he considered to be pro-slavery glory.

On May 1, 1857, Walker was arrested by the US Navy and forced to surrender the presidency, but he was driven out of Granada even before that. On December 14, 1856, 4,000 troops from all over Central America surrounded him. Before he and his men fled across the lake, Walker ordered that the city be burned to the ground. Amidst the smoking ruins, they left an inscription that said, “Here was Granada.”

What a bunch of dicks.

The next day, as we were changing buses in Managua, I found Wi-Fi and did an image search, just to satisfy my curiosity.

William Walker did not have a beard.

The next city we went to was León. I was excited to visit because it had been home to the turn-of-the-century poet, short story writer, journalist, and diplomat Rúben Dario. He’d been a central figure in the modernismo poetry movement, but what I liked most about him were the adoring verses he’d written about Walt Whitman. Walt Whitman was a man of many positive qualities, among them a truly triumphant beard.

To get from the Cathedral-Basilica of the Assumption of the Blessed Virgin Mary (Dario’s final resting place) to the museum that now occupied the poet’s childhood home, we had to cross through León’s Central Park. It felt like many other Latin American plazas I had seen, full of trees and flowers and pigeons. Throughout the park were statues of lions, the city’s namesake spirit animal. The sky was cloudy, and groups of people loitered, enjoying the cool weather. We walked past a couple of young guys, probably around twenty years old, sitting on a bench. One of them commented as we passed, wrongly assuming that I couldn’t understand him.

“Look at that couple,” he said in Spanish. “She’s so beautiful. And what’s she doing with that scruffy, bearded asshole? He’s monstrous.” He thumped his chest. “She should be with someone like me.”

The smart thing would have been to ignore him, to keep walking. But we’d smoked the last of our weed earlier that morning, and I was feeling a little on edge. I approached, scowling.

“Hey, man. I speak Spanish, you know. I understood every word you just said.”

His eyes went wide, but he quickly recovered his bravado.

“You were speaking loud enough for everyone in the park to hear you.”

He smirked, looked at his friend, then back at me.

He had me there.

I had no choice but to laugh it off, and we headed on to the museum.

Except once we got there, I couldn’t concentrate. We walked through the poorly lit rooms, staring at display cases that held old scraps of paper, photographs, and journals. I was preoccupied, wondering why Nicaraguans found my beard so offensive. I mean, it didn’t look particularly good, but it wasn’t that horrible, was it? It was just a beard. Who cared?

Maybe it was what a beard symbolized in a country like Nicaragua. León had been the site of heavy fighting between Sandinista and Contra troops in 1978 and 1979, during the Nicaraguan Revolution. The Sandinista National Liberation Front (FSLN) was now the party that controlled the government under the Presidency of Daniel Ortega, one of the key revolutionary guerrilleros in the late 1970s. Ortega had led the country from 1979 to 1990, at which point he was ousted by a coalition of opposition parties. In an election marred by claims of fraud, he took the presidency once more in 2006. Determined not to lose power ever again, Ortega pushed through a constitutional change that would eliminate presidential term limits, providing him with more time to violently suppress opposition. The man who had once been a national hero became increasingly unpopular. Perhaps my beard stirred up the national memory of scruffy guerrilla armies and the corrupt government they had founded. That had to be it.

We walked back through the plaza, but nobody hassled me this time.

After a couple days, we went north to Somoto, a town of about 21,000 in the hill country by the Honduran border. The municipality itself was mostly quiet. What made it a tourist destination was its proximity to Somoto Canyon, a protected national monument. This length of the Coco River flowed slowly between narrow limestone walls, making for a dramatic but mellow float. Scientists had “discovered” the canyon in 2004, but our tour guide, who had fought as an FSLN soldier against U.S.-backed Honduran troops in the early 80s, had known about it for much longer.

He pointed to one of the canyon walls and said, “That’s where we attacked them and pushed them over the edge and onto the rocks below.”

But apparently the natural and military history of the place wasn’t enough of a draw to crowd the town with travelers. We were the only guests at our hostel that night. It was a little disappointing, actually. Hostel common rooms can be a great place to meet people who speak your native language. Even more importantly, these spaces often act as a market for small quantities of drugs, or at least for information about where small amounts of drugs might be locally attained. No such luck. The upside of the empty guesthouse was that we wouldn’t have to share access to the kitchen with anybody else. There were few things more frustrating than having to work around strangers in a hostel kitchen, so usually we avoided it, opting instead to dine on peanut butter and jelly, or, if we were feeling indulgent, to find a cheap restaurant or food cart somewhere. But not tonight. We were going to cook something good.

There was a small supermarket across town, where we picked up supplies. I walked slowly through the aisles, entertained by all the products with which I was unfamiliar. Amused, I noticed a plastic jar labeled “sal chino” — Chinese salt, monosodium glutamate.

We checked out and headed back toward the hostel with our groceries. The sun was starting to set, and folks had thrown open the front doors of their houses to let in the evening breeze. I had a difficult time keeping my eyes to myself as we walked past, but I rarely saw anything more sensational than a small group of people gathered before a blaring television.

However, at one of these homes, a toddler came tearing out of an open door. Surprised to find someone standing there, he halted and looked up at me. Having never in his life seen something as terrifying as my beard apparently, he burst into frantic tears. Fear petrified him, and he fell to the ground, unable to do anything other than scream in total, breathless horror. His mother came to the door to investigate, and when she saw me, she started laughing. The bearded gringo on her front step was as hilarious to her as it was scary to her tiny son.

I wasn’t quite sure how to feel about it. This kid didn’t have a political affiliation or any knowledge of history. He didn’t associate me with William Walker or Communist guerrillas. All he knew was that the world suddenly wasn’t as safe as he had assumed it was. After all, it was capable of conjuring something as strange and ugly as my beard. All I knew was that I was leaving for the border tomorrow morning. I swore to myself that once I got to Honduras, I’d get to a barber.

Well, maybe I’d find someone to sell me weed first.

But, immediately after that, getting a haircut was at the top of my list.