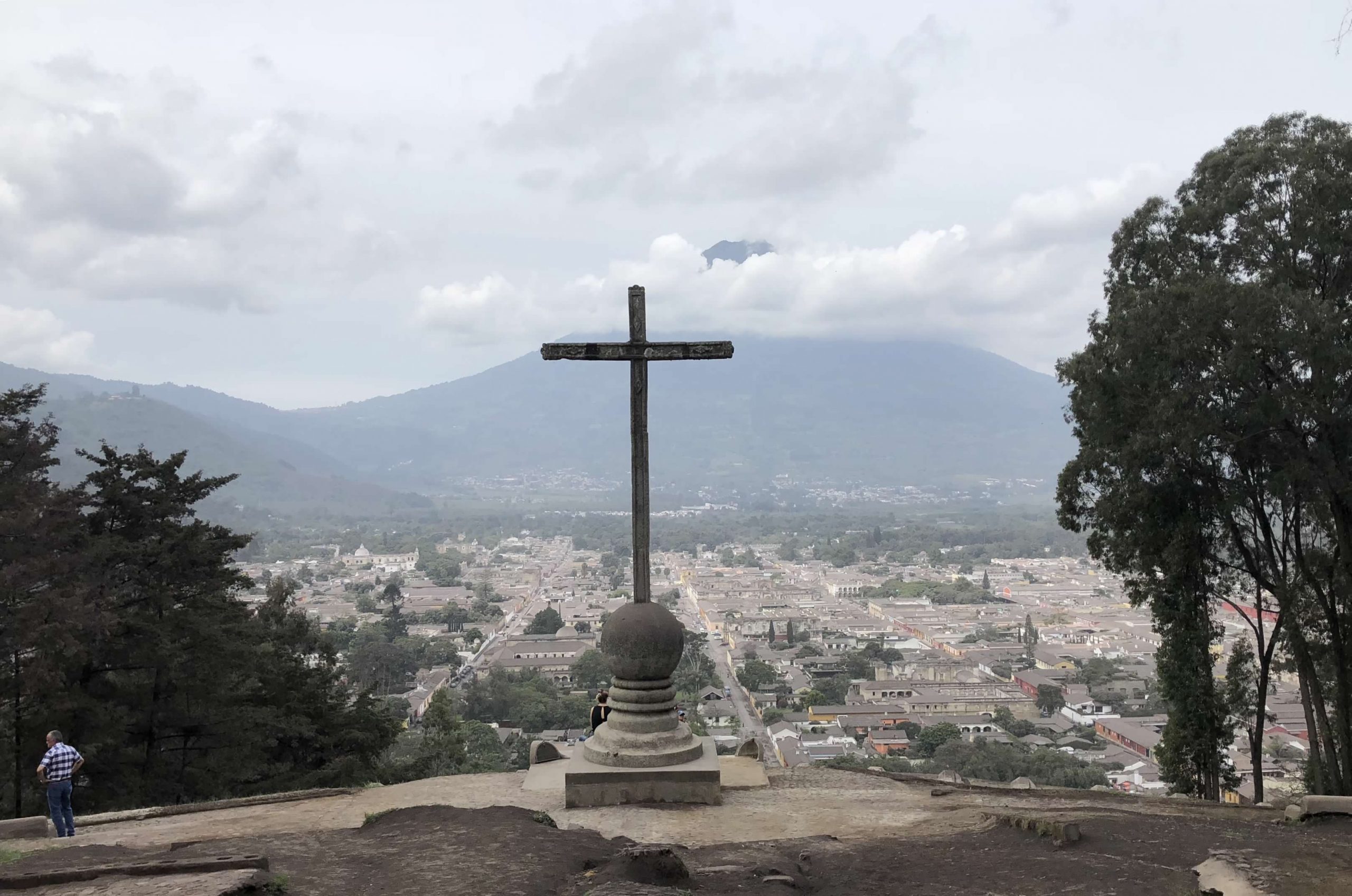 They Told Me Not to Go to: Antigua, Guatemala

By Debra Westgate-SilvaNovember 2, 2022November 7th, 2022Central America, They Told Me Not to Go
No Comments

In the first installment of our “They Told Me Not to Go to” series, Debra Westgate-Silva steps onto Antigua’s ash-caked streets as she prepares to hike a nearby volcano in Guatemala, but the day doesn’t end as planned.

They told me not to go to Guatemala, but Antigua’s allure was powerful: the rich history, the vibrant culture, the Baroque architecture. I wanted to see the iconic landmark of Arco de Santa Catalina — its yellow arches with Volcán de Aqua looming in the distance — and climb the 320 stairs to Cerro de la Cruz (Cross on the Hill) to overlook the quaint cobblestone streets and colorful stucco buildings with their windows lined by iron bars adorned with flowers. I hoped to see the orange glow of Volcán de Fuego and planned to hike the less strenuous Volcán Pacaya.

After grabbing an early lunch in downtown Antigua, I left the restaurant, planning to meet the driver who would take me to Pacaya, but stopped short. The streets, which had been bustling earlier, stood still. No passing cars. No strolling pedestrians. People huddled under storefront canopies, taking cover from a light drizzle. Except for the patter of raindrops, the street was silent. Eerily silent.

With a mixture of confusion and uncertainty, I stepped onto the sidewalk, ready to make the trek to the meeting place. I immediately jumped back, taking cover with the others. I was splattered with… I didn’t know what. Mud? Dirt? Sand? It was all over my jacket, my hands, my hair.

Whatever was falling from the sky looked like rain. It sounded like rain. But cars parked along the street were covered in a layer of black. The sidewalks were coated.

She shook her head. “No inglés.”

I approached another woman. “Do you speak English? Qué pasa?” I knew I wouldn’t understand the response.

“The rain clouds — they’re at the same height as the volcanoes.” He pointed vaguely south, towards Volcán de Agua, and then west, towards the twin peaks of Fuego and Acatenango. All were obscured by fog. “When it rains here, sometimes the rain carries ash from the volcanoes. It’s normal. It’s just messy.”

I hadn’t read anything about this in my travel books, but since this seemed normal, I put up my umbrella and headed to my excursion.

The drive to Pacaya was more eventful than the hike itself. The driver didn’t speak English. He didn’t smile. He seemed distracted, harried, as we stopped to pick up two other women from a nearby hotel. His agitation was understandable. It was still raining ash. He had run out of wiper fluid, and his windshield was filthy. Although the wipers worked furiously, they smeared the ash in instead of clearing it away. As the ash thickened, the wipers strained until they finally groaned and gave up mid-sweep.

Our driver grabbed a towel from the vacant seat beside him, covered his hair, and stuck his head out the window. For a few wide-eyed miles, he drove with his head outside of the car, one hand on the wheel.

Eventually, traffic came to a standstill along a narrow street. A shopkeeper ran from his store wearing an apron and carrying a gallon-sized jug. He poured water onto the windshield of the car in front of us. They crawled forward. He ran to our van and dumped out the rest of the jug, clearing an area the size of a dinner plate. We crept along. The shopkeeper dashed back to his store. Others joined his efforts, brandishing bottles and jugs of water. Back and forth they raced, so ash-caked cars could inch ahead.

We finally reached our destination, bewildered but intact. Relieved to leave our driver and the strange ride behind, the other two women and I followed our hiking guide up the dirt trail leading to Pacaya’s peak.

The rain had stopped, the air was crisp, and birds chirped and squawked from within the lush greenery that surrounded us. The beauty was only interrupted by a feeling of unease as two men with horses lurked behind our little group, stopping when we stopped and following along when we started up again.

It wasn’t long before the climb became more strenuous, and the reason for the men’s accompaniment clear: we could ride their horses for one hundred quetzales (the equivalent of $15USD at the time). We declined, but as the incline steepened and the greenery grew sparse, we relented, handed over our quetzales, and mounted their old, surefooted horses.

When we reached the highest point hikers are allowed to ascent, fog obscured Pacaya’s peak. Our view was limited to vast stretches of black and gray, volcanic rocks and ash. But the breeze, swirling dust around our feet, at times cleared the fog, giving us glimpses of smoke emitted from the top, as if the mountain were breathing. And then we got lucky: Pacaya spewed a burst of rocks into the air.

We were excited and talkative on the descent, as if Pacaya had put on this special performance just for us. Our guide took out a bag of marshmallows, and we roasted them in a lava pit still warm from an eruption four years earlier. We sat and talked, ate and laughed, and snapped photos for souvenirs.

Back at my hotel, I ordered a glass of wine and sat outside. My body and mind were tired — a serene, relaxed kind of tired, made even better by my enchanted surroundings. The courtyard was a small square of grass enclosed by brick and white-washed walls. Although the walls and colorful umbrellas were still splattered with dried ash, the wrought-iron tables and chairs, placed around the perimeter, had been cleaned. Bright red tropical flowers climbed the walls, and planters of fuchsia and vibrant yellows hung at varying heights, enveloping me in color and fragrance, tinkering water fountains, and fairy lights.

A family I had met earlier spilled out of their hotel room, a couple from Indiana with the three children they had recently adopted. They were here for four months, the woman had told me during breakfast, to learn the language and look for real estate.

She approached me now. “Did you let everyone at home know you’re safe?”

“I let them know I arrived last night,” I said, sipping my wine, “right after I checked in.”

“No, I mean since the eruption? Have you let them know you’re safe?”

What was she talking about?

Fuego is active, I thought, like Pacaya. I hoped to see evidence of its activity with the hotel’s telescope, just as we’d seen Pacaya hurtle rocks. Active is different from erupting.

Was she saying Fuego erupted? That couldn’t be right.

But my mind flashed to the falling ash and the harrowing ride to Pacaya just as a hotel worker came by and handed me a note. “A message for you,” he said, “while you were out.”

I unfolded the piece of paper. Someone named Paulo had called from Maximo Nivel, the language school I planned to attend the next day. Program cancelled tomorrow due to Volcano. Check email for updates.

“It’s on the local news, right.” I heard myself say. It didn’t come out as a question.

The blood traveling through my body sounded louder than her words.

“Roads are shut down,” she continued.

“The roads are open,” I said. Some part of my brain wanted — needed — to prove her wrong. “I just came from Pacaya.”

“We couldn’t get to Guatemala City.”

The airport was in Guatemala City.

She nodded, as though reading my thoughts. “The airport is closed. Flights cancelled.” She paused. “Who knows how long it’ll take to reopen? The infrastructure here is fragile.”

“I just hiked a volcano.” My voice sounded far away.

She leaned closer, her eyes narrowed in concern. “You hiked Pacaya. Fuego erupted.” She spoke with exaggerated patience, as if to a child slow to understand, but I didn’t care. I was too busy trying to make sense of all she was saying, of all I hadn’t planned.

“If you go on Facebook, there’s an alert to mark yourself safe.”

I looked at the woman. She looked at me. I think she expected a response, but none formed.

Several moments passed, each of us holding our gaze until, finally, one of her little girls bounced over and broke our trance. “Come see the volcano,” she said, taking my hand.

She led me up the stairs at the side of the building to the rooftop terrace. A few other people stood, silent and intent on the mountain peaks in the distance.

In the dusk Fuego’s peak glowed orange and red.

It was what I’d hoped to see.

Every few minutes the colors intensified, pulsing with anger.

No one spoke. We simply stood.

Debra Westgate-Silva is a freelance writer who has worked in public education and in children's welfare and advocacy. She is the author of the children's picture book, Bethlehem Barn, and her work has been published in Highlights children's magazine and Teaching Tolerance (now Learning for Justice). Learn more at www.debrawestgatesilva.com.