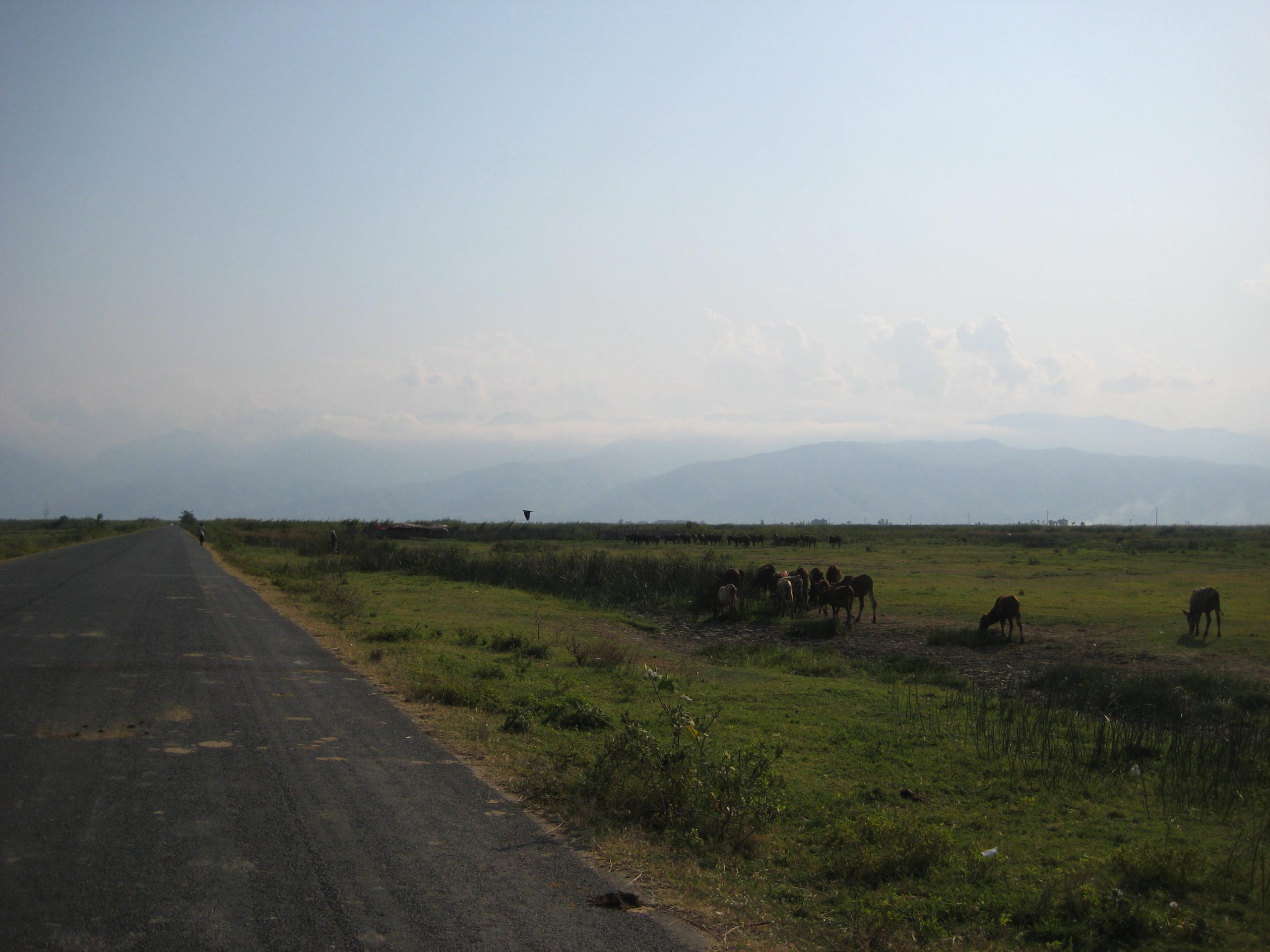 They Told Me Not to Go to: Burundi

In the second installment of our “They Told Me Not to Go to” series, Stu O’Brien travels into Burundi amidst a chaotic election and witnesses the strength and kindness of the locals.

They told me not to go to Burundi.

Not when an election is scheduled. Not when the government is rounding up and arresting political opponents. Not when there have been 100 grenade attacks in the capital, Bujumbura. They told me not to go, but I went anyway.

After a two-day bus journey from Arusha, where I have been living for the past year, I arrive in Kigoma, on the eastern shores of Lake Tanganyika. In the fading light of the late afternoon, I wander down to the shoreline to watch a final sunset in the relative safety of Tanzania. The red sand under my feet is coarse, and it sounds like I am walking on sandpaper. At the water’s edge, women are washing clothes, and their children are splashing in the shallows. Further down, fishermen are returning, dragging their boats to shore after a long day on the water. A herd of cows with enormous, curved horns sit idle, completely uninterested in the entire spectacle.

I sit on the sand and feel a mixture of apprehension and excitement. My thoughts drift to a time years earlier in Ghana. I spent a similarly reflective evening in the border town of Takoradi the night before traveling to Cote d’Ivoire. That journey, which subsequently extended to Liberia and Guinea, was a thrilling, life changing adventure, and I am hoping to revive some of those feelings in Burundi.

The early morning journey to the border, aboard an emphysemic, dilapidated bus, traverses rolling hills of red earth. Palm trees and gamba grass garnish the roadside, and mountains rise across every horizon. We drive deeper into the ranges, and Kigoma is soon a distant memory. The countryside is as sparsely populated as anywhere I have been in Africa, and I have never felt so isolated.

The travel warnings for Burundi strongly advise that any necessary travel be limited to Bujumbura. When I arrive at the border post, the customs officer, dressed in a white singlet, black tracksuit pants, and plastic sandals, shrugs his shoulders when I ask about reaching Bujumbura by nightfall. He is indifferent as to where I go and when I get there. After stamping my passport and taking my money, he promptly returns to his office. Welcome to Burundi.

“Nyanza, Nyanza!” a taxi driver calls to the few travelers loitering at the border. Nyanza Lac is the closest main town, with buses to Bujumbura operating daily. “Hey mzungu, unaenda Nyanza?” he asks — “White man, are you going to Nyanza?”

“Ndiyo,” — “Yes,” and I squeeze into the five-seater sedan along with eight other passengers.

After a sweaty and uncomfortable two-hour drive, we arrive in Nyanza Lac. I stretch my back and legs, after extracting myself from the mass of bodies squished in the car. I ask around for buses to Bujumbura only to be informed that they have finished for the day, “Kesho mzungu, rudi kesho,” — “Tomorrow white man, come back tomorrow.” Standing in the bus station, I watch minivans come and go, ferrying people to and from surrounding villages, and contemplate my next move. I am the only mzungu in town, and inevitably attract a crowd. People holler at me from every angle, offering transportation, hotels, and meals. Some whisper more salacious invitations: “Sexy girl, ganja?” The touts jostle with each other, trying to coax me in their direction: “Come mzungu, this way.” Before long, arguments break out, and they go from shouting at me to shouting at each other.

The commotion is soon interrupted by a man in a brown uniform and green beret. Sammy introduces himself as a police officer, and the crowd disperses almost as quickly as they had assembled. I am asked to accompany Sammy to see the police chief, and he will ensure that I am safe and housed for the evening.

At the station, a U-shaped compound of adjoining concrete rooms, we walk past the holding cells. They are furnished with simple wooden benches and bedframes with thin mattresses; a single light protrudes from the ceiling of each cell. Through the tiny, barred openings on each door, I see vacant stares, anger, desperation, fear, and sorrow. Sammy tells me many of the men have committed theft, one of the most socially unacceptable offenses in Africa.

The police chief, dressed in an all-white Manchester United tracksuit, leaps from his chair when we enter his office. “Welcome mzungu! My friend, how are you, how are you?” he says with a vigorous shake of my hand.

“I’m fine, thank you,” I reply, bemused at his choice of dress and exuberant manner.

“How do you find Burundi? What is your business here?”

“It’s very beautiful so far,” I reply. “I’m traveling from Arusha, just for a visit.”

“You are most welcome. It is a hard time now in our country, but I am sure you will enjoy. So, you want a hotel, my friend?”

“Yes, just for one night, tomorrow I will go to Bujumbura.”

“Do not worry, my friend,” — which I inevitably do when someone tells me this in Africa — “I can take you to the best hotel in the country. It is where the President stays!” he boasts.

The hotel is modest, especially by presidential standards; however it has a large bed and shower, which is all I need after another long day of travel. The chief says that Sammy will meet me in the morning and take me back to the bus station. Sammy smiles and nods in agreement.

“Ok, my friend, have a good night, and please be safe in Burundi.” he says before departing.

Over a dinner of fish and rice, I sit and watch the sunset on Lake Tanganyika. The waves break gently on the shore, and birds circle overhead. I can hear the faint laughter of children playing nearby, carried along by the soft evening breeze. On the horizon, the mountains grow into ever paler shades of blue, before becoming indistinguishable from the evening sky. As the sun eases into the bosom of gathered clouds, all is silent, and I wonder why they told me not to go.

The Burundian presidential election is only days away, and with the opposition alliance announcing a boycott, citing widespread fraud and corruption, President Nkurunziza will stand as the only candidate. His declaration of the boycott as illegal has only inflamed the situation, and grenade attacks are continuing through the capital. In a final show of strength before election day, Nkurunziza showcases his military support with a parade through the streets of Bujumbura. Tanks, jeeps, and armored vehicles rumble down a wide boulevard, accompanied by armed soldiers marching in unison. I stumble upon the spectacle by accident and watch from the rear of the crowd, not wanting to draw attention to myself. The crowd is unusually quiet, and the stomping of the soldiers’ boots is audible, even from a distance. I imagine that they are as stunned as I and have gathered out of morbid curiosity, rather than nationalistic pride. After a year of living and traveling in East Africa, my ears are well tuned to the word mzungu. I hear it now being whispered in the crowd around me and take it as my queue to move on. They told me not to go to Burundi. Not when an election is scheduled, and not when the military is marching through the streets. I do not want to tempt fate any further, so I discreetly leave, disappearing into the streets from which I came.

In the afternoon, while resting in a neighborhood park, I am treated to another display of Burundian power. A group of men arrive and gather on a basketball court. They carry with them a set of large wooden drums and arrange in a circle. Drumming is central to the Burundian identity, and it held an important ceremonial role in the precolonial kingdom. The spiritual home of Burundian drumming is Gitega, 100 kilometers east of Bujumbura, in the heart of the country. Over the next hour, I watch the group rehearse. They beat the hide skins with thick sticks, sing, chant, and dance, twisting and jumping through the air. Their bodies shine, as beads of sweat drip down their muscular arms and backs. A young boy, not yet old enough to join the troupe, skirts the edges, mimicking his elders. As a finale, the men hoist the drums atop their heads and continue playing, beating the skins and tapping the wooden frames. Rat-a-tat-tats and booms echo through the park. One by one they depart to the left, walking off the basketball court as if it were a stage.

Long after the drummers have departed, I am still sitting in the park, gazing into the mountains that surround Bujumbura. All is silent, and I wonder again why they told me not to go.

Following the election, which Nkurunziza wins with an absurd 91% of the vote, I travel on to Rwanda. My final days in Burundi are spent lazing on the beaches of Bujumbura, reading Alex Haley’s Queen, spying hippopotamuses in Rusizi National Park, and riding a bike close enough to see the Congolese border before being turned back at a military checkpoint. I explore the city’s markets, eat baguettes, experience a French colonial hangover, and cheer on Ghana as they progress through the FIFA World Cup.

They told me not to travel to Burundi, but I went anyway.

Stu O’Brien is a travel writer from Melbourne, Australia. He publishes a new story each month at https://www.travelonastustring.com/, drawing inspiration from his 20 years of travel through more than 75 countries.