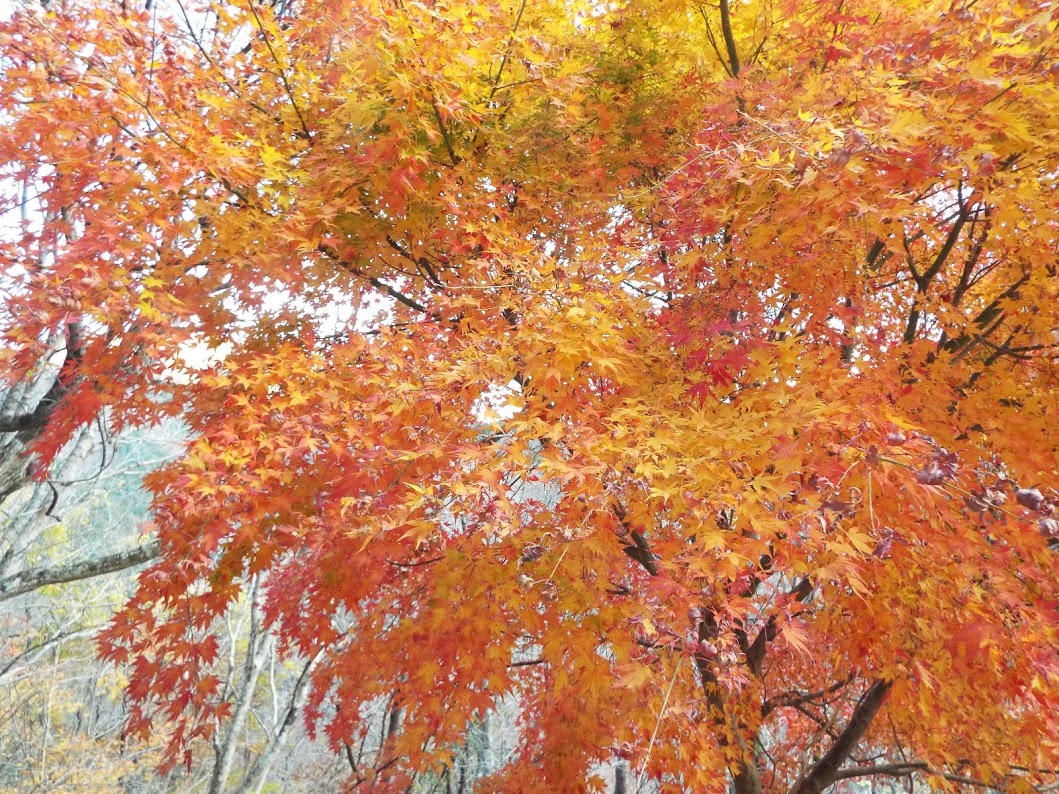 Autumn in the Iya Valley

By Emma BoyleDecember 10, 2019Asia
No Comments

In this story, the second of a two-part series on Japan, our writer passes under changing leaves and over mountains to visit a village of scarecrows and a forest full of artwork.

All of which can be true, but a world away from the peaceful, mountainous landscape I currently find myself in, nestled in the heart of Shikoku, the smallest of Japan’s four main islands.

I’m here in the remote and secluded Iya Valley, thought by many to be one of the last few vestiges of old-world Japan, to witness “the turning of the leaves.” A lifelong lover of autumn, this typically poetic phrase for the seasonal foliage colour change sends a musical thrill down my spine. Beyond the reach of the shinkansen (bullet train), it takes me an age to get around as I drive myself and a companion along narrow mountain roads, twisting and looping back on ourselves. A former urbanite, my natural tendency is to rage at travel delays of mere minutes, but time moves at a different pace out here, and I breathe and attempt to adjust accordingly.

It’s a gloriously sunny autumnal afternoon, and the mountainsides are a patchwork of red maple, yellow ginkgo, and green pine trees. We drive to see vine bridges built in the thirteenth century, crossing a deep gorge that runs through the centre of the island.

The first vine bridge hangs suspended high above a rocky river with huge gaps at the sides where, if you slipped or stumbled, you could easily fall through. As I tentatively step onto the weathered planks, I wonder how it’s open to the public with such safety considerations, and if any visitors are lost through the gaps during the year. The view from the bridge is stunning, though. The surrounding trees have turned orange, and the rocks of the riverbed are a pale jade green so that the scenery looks like a Japanese woodcut print. As I steady myself to take a photo, I consider that if I fall and die trying to get a selfie for Instagram, it will be the millennial death I deserve.

The inaka (countryside) of Japan, as with many places these days, suffers from a declining and aging population. But where in the west, wealthy white people retire to green and pleasant lands once they tire of city life, forming Rotary Clubs and playing golf, the problem is more pronounced in Japan. While beautiful, life in the inaka can generally offer only back-breaking agricultural labour. A tide of young people flow to the cities, like children in a fairy-tale dancing to the Pied Piper, in search of nightlife and jobs in front of computer screens. When it’s common to see old people bent over at right angles, their backs bowed from a lifetime of working in the fields, who can blame them? As the older population dies out and no-one takes their place, the inaka becomes ever quieter.

Nowhere is this sad affair more apparent than in Scarecrow Village.

The story of Scarecrow Village is this: A local woman, increasingly lonely as residents left for the cities, started recreating her former friends and family with scarecrow counterparts, who now populate the entire village.

We stop there as dusk is falling. Whole ‘families’ sit on benches. A scarecrow boy hangs in a tree. ‘Children’ play on swings. A workman in a hard-hat and hob-nailed boots stands by the side of the road with his hammer eternally raised above his head. Most of the buildings seem abandoned. Old vans without wheels sit decaying in overgrown grass. An antiquated vending machine rusts by the side of the road. Faded curtains printed with rocket ships hang at a cracked window, clearly a child’s former bedroom, the owners long gone. Rumour has it the woman still lives in the village, alone but for her scarecrow friends.

It’s getting dark by this point so, having no intention of waiting for the scarecrows to animate come night fall and eat our souls, we drive away from the Village of Sadness.

An exception to this trend of decline can be found in next day’s destination: The village of Kamiyama (translation: Divine Mountain) has managed to reverse the tide of evacuees and draw people back to its beautiful hilltop setting.

We arrive early in the morning and walk around the village. Tiled pagoda-roofs dot the hillside, which is a green jumble of rice paddies and cotton fields and vegetable patches growing lettuce and cabbages. A graveyard snakes up the mountain, the ground littered with star anise. Husks of harvested rice hang drying in the eaves of barns. When a man pulls into his driveway just at the moment we’re taking photos of his house, we think we’ve been caught in a gaijin-smash (foreigner faux-pas) and start walking away. Instead, he runs after us and invites us in, proudly showing us around his self-built home.

He speaks a little English, and my friend speaks a little Japanese, and with some supplementary help from Google Translate we learn, over cups of green tea, the story of Kamiyama’s success, which I happily relay to you now.

This minor miracle was achieved, in large part, by a social-minded local businessman who, saddened at seeing his rural hometown become increasingly neglected, resolved to take action. Convincing two large tech companies to set up offices in the vicinity, he ensured the area can now offer well-paid employment. In addition, he led an initiative instigating the annual Kamiyama Artist in Residence (KAIR), where international artists create artwork to be displayed all across the mountain. Where artists lead, the young hipsters follow.

Our host walks us to the start of the KAIR art tour and when it becomes apparent the tour requires a car to reach the artwork, he spends the whole day driving us around and telling us about the history and regeneration of the village. I’m assured by a British expat I get talking to later that this sort of kindness is typical of Kamiyama.

We spend our day traipsing through woods, finding sculptures hidden in the bracken, and sitting in warm sunshine underneath a cinnamon tree while artists speak about their work. Back in the village, the main street is lined with twisty bonsai trees. Dark wooden houses conceal steep staircases and sepia photographs of solemn-faced former residents clad in kimonos.  The old sake factory is utilised as an exhibition space, and they hold regular cinema screenings in the old theatre. Usually I feel conflicted about gentrification, but when I see a hipster coffee shop with a queue out the door, and an artisanal brewery, well, my heart grows three sizes. Life had returned to this corner of the inaka.

Emma Boyle is a sometime writer and illustrator, part-time traveler/part-time Londoner, full-time wage slave and lover of any film that ends in a dance contest.