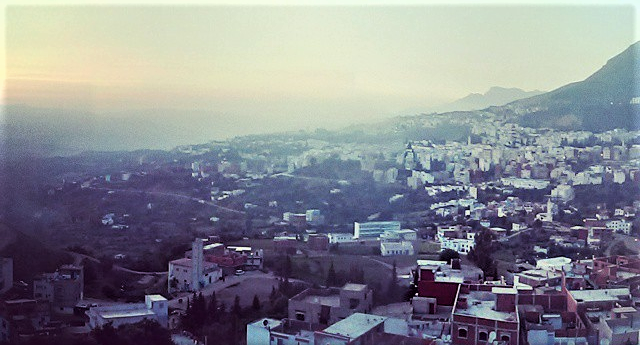 A chance meeting with a Syrian asylum-seeker on a bus in Wales opens up a new way of looking at life and love, and reveals the contrast between two different worlds.

The first thing I noticed about the young man next to me was that he was reading Arabic, so I inquired about where he was from and if I could practice some Arabic with him. I had recently been in Morocco, and the lovely Arabic call to prayer still echoed in my mind with the clarity of the sunset that it serenaded.

He obliged with a smile, maybe eager for a friend of his own. We began to share our stories, though he divulged his with hesitance, for it was nowhere near the study abroad trip I had recently completed. His was a story of survival. He told me of his family back home, his mother and father still living in their beautiful village in the countryside of the city he fled when the bombings started. He told me of the date groves near the house and grapevines that gave the most wonderful fruit. His words painted a picture for me of the home that his heart ached for.

When we arrived at our destination, we continued the conversation over coffee, and this is when heartbreaking details began to reveal themselves. Over the next two days, he would tell me of his temporary asylum in Greece and sneaking over the border into the Balkans three times and being sent back twice. He told me of the nights spent in the frozen forests walking through France, of the many illegal passports he purchased just to reach the UK, a safe place to stay and one that would not deport him to the violence of Syria. He told me of weeks without food as he and a group of four other asylum-seekers walked across the European continent in search of safety.

He told me of the reality of the conflict in Syria in words and from eyes that I’d never experienced before. He told me about his family, his two younger sisters and his parents that owned acres of vineyards just outside of Damascus, and how he’d go back on weekends to help out in the vineyards. “I had a dream to become a mechanical engineer and had been studied at Damascus University,” he told me in his rapidly improving English. He brought me into a world so familiar, so close to my own experience of growing up on a farm and going to University.

But that’s where the parallels stopped. While I had seen friends join various fraternities, he had seen friends joining different sides of the conflict. He had tried his hardest to stay out of it, to stay focused on the studies that could be his ticket to another life. A dear friend of his had joined the locally known Daesh (ISIS) forces right before the Syrian regime tried to combat the ever-growing ISIS forces in Damascus that erupted in a violent air-raid that left him unable to find his friend and fearing for his life.

He was asked to take a side or flee, and he chose the latter, unsure of when he would see his family again.

I was ashamed of my ignorance of the entire conflict. He showed me, with pride, the raffle ticket for the US visa which they award to 50,000 people worldwide, each year, and my heart swelled with tears as I thought about the US passports in my backpack. Here in Wales, he waited. He was safe but not free. He could not work, could not go anywhere except London and Cardiff as he awaited his UK ID, and could not hear from nor write his family. In all this heartache, he managed to give and to share with me. I was undeserving of the kindness of this man.

As we talked, he showed me around Cardiff and invited me to make a Syrian dinner — it was his night to make dinner for his roommates, four other asylum seekers, only one of which he could fully communicate with. As he hunted down the food for the meal, he taught me new Arabic words that he used in the Halal butcher’s shop and the small Syrian market.

In his house, I once again felt the overwhelming kindness of these strangers, even in the midst of their stories. Each of them had struggled to get to this place of safety, leaving behind families, friends, loved ones. One of the individuals there was a Kurdish activist who endeavored to share with me his story, too. This man’s name was Kiwa, and he will have a story of his own.

Dinner was enjoyed with a mixture of several languages and lots of laughter and smiles. Card games ensued and the night was full of smiles and delight. At the end of the night, he walked me to my hostel for that evening. We talked as we had the past several days, but there was mournfulness. I was to leave the next day, and so new words began to enter the conversation.

“Girlfriend,” “visiting parents,” “wife,” “marriage,” words unfamiliar to this bond of friendship we had formed, and I saw a longing — longing for a friend to spend time with, to pass the endless days of waiting for a visa, a longing for the freedom that being American (even if by marriage) meant for him and his family. A longing to see his family again, a longing to have a new family, a longing to have someone to stand by as he watched his home fall to pieces, watched his family trapped in the storm of war. The proposal was gentle, casual but heart-wrenching. It was a proposal that sought survival and happiness within the survival. We all fall in love with the happiness that comes in the stranger sitting beside us, whether we’ve never met them and their smile brightens our day, or their eyes echo the love of the years of life behind you both. The instinctual pursuit of what we all seek in life, to be happy, to be loved, is what we really need to survive.

Dawn Musil is an ecologist and entrepreneur who is passionate about travel and is working to integrate her passion for conservation and travel. She has spent time abroad researching women in STEM fields, volunteering with bees, and teaching English and is constantly in pursuit of the best cup of coffee around!