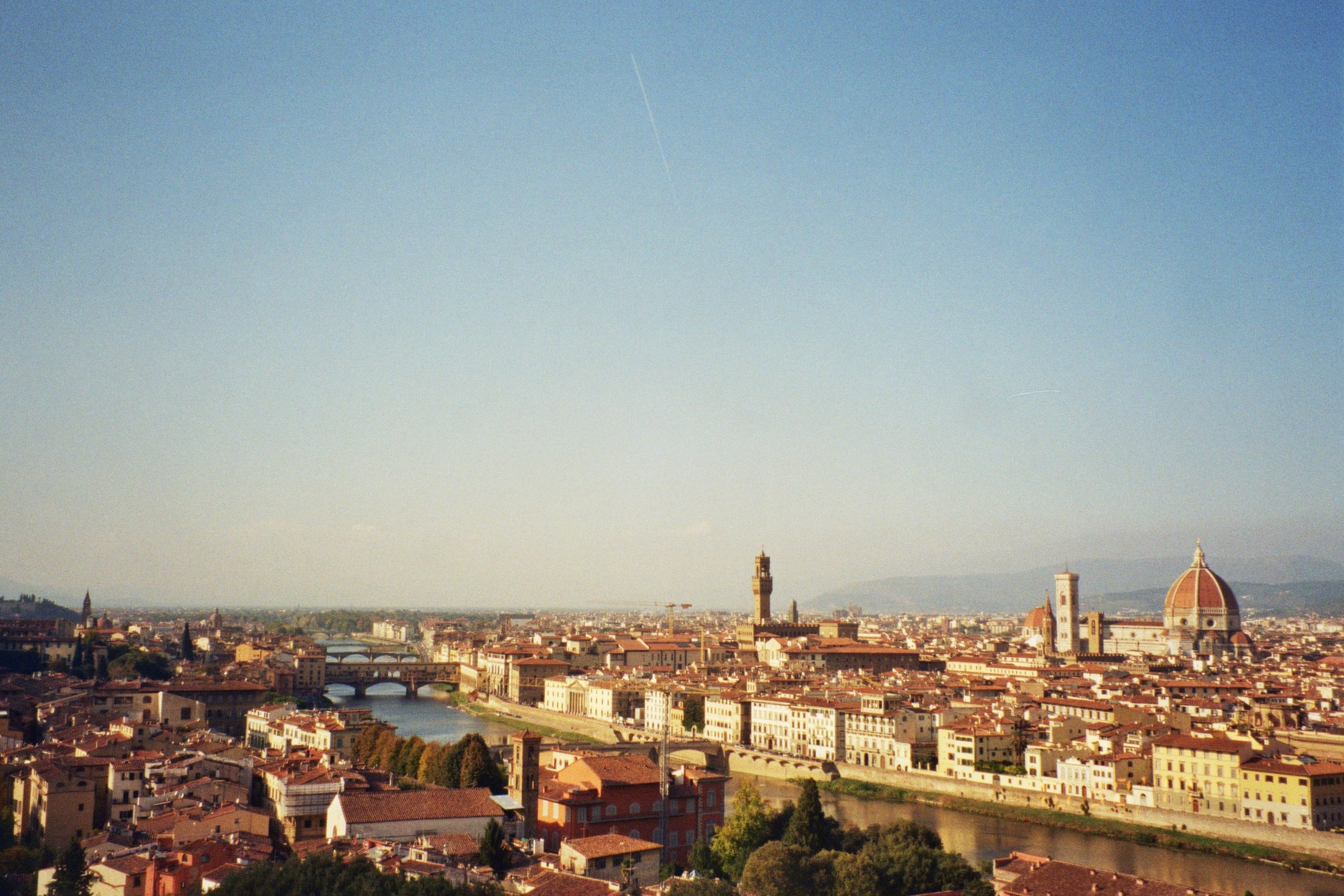 Distant memories are kindled when a traveler visits a family run restaurant tucked into a Florence side street.
Selected as a finalist in the “Reunions” travel writing competition.

There is something alive and beating behind the cold, grey brick.

The restaurant doors are tucked into the corner of two adjoining walls; one a cream color and the other a faded pink. A strip of pastel green borders the cutout, a lukewarm attempt at plucking the entrance from complete obscurity. We have crossed over to the southern banks of the river Arno. Google Maps places us next to a chunk of old city wall remnants; the sixth and final wall that was built to protect all of the Oltarno in the 14th century. The yellow lights that flooded the Florentine streets don’t seem to reach this particular corner, so we wait in the dark, peering through glass windows.

When she opens the door, she might be ten or eleven, but when she speaks, she could be fifteen. Her voice carries the authority and control of someone who has acted as the English-speaking spokesperson of the family for some time, now well equipped to deal with lost foreigners.

We are the only ones outside. I peer over the young woman’s shoulder, into the restaurant. The tables are set, yet all still empty. The woman notices my gaze.

“My family is still eating dinner,” she says. “When we are finished, we will feed you.”

I lean against the brick walls, listening again for that familiar thump from inside. The beating narrows the longer I listen, turning to muffled voices. There is yelling, screaming even. Some voices are deep and dark, booming against the brick, while others are shrill and sharp, piercing through the cracks in the wall. Laughter injects itself into the chorus, coming from nowhere, loud and unrestrained. There is no organization, no turn-taking, all overlapping and cutting through each other, as if each voice feared being forgotten and fading into the night.

I don’t speak Italian. Any real chance of connecting to that small part of my ancestry had been lost with my grandmother’s passing, only a month before my birth. While she had been raised among the cane fields of North Queensland, her mother had migrated from the Apulia region, along the Adriatic Sea, her father from somewhere near the Swiss border.

The young woman at the front door is now our waitress. Her tone softens, welcoming us to the restaurant, which has belonged to her family since the middle of the 20th century. She offers her recommendations, which we were happy to abide by, as the menus have no English.

While we wait, familiarity begins to creep in again, getting under my skin and fingernails. We can hear the kitchen from our table, the remnants of the dinner time conversation scattered between the clang of metal pots and pans, shouting and laughter bursting in between the smack of wine glasses on table tops and the gasp of air from a beer bottle leaving moustached lips. It’s all in Italian, but I can probably pick the topic of conversation—from the ebb and flow of old family stories to the unbridled chaos of political debate.

Back in Australia, we would visit my grandfather at his home every Sunday night. Cousins, aunts, uncles, and siblings all gathered in the small, low-level brick house in the outer southern-suburbs of Brisbane. These late afternoons and evenings had been filled with sun, chlorine, grass, dirt, bindis stuck to the soles of my feet, and rampant dinnertime conversations. My grandfather had sold the house a few years ago, yet the sounds, sights and scents of the Tuscan restaurant were stirring up bits and pieces of home, little parts of a place that only existed in memories with blurring edges.  The restaurant also made use of the white tiled floors and table tops lined with leather green table mats, which I knew could leave a slight burn if drawn too quickly across bare skin. There was a similar random splattering of ornaments and frames across the walls; old gardening and carpentry tools from a bygone era, proud family crests, and mediocre paintings of farmlands and hillsides, each with fields of wheat and decrepit timber huts. All that seemed to be missing was the mustard-brown shag carpet. Even the black and white photographs, each with the same, smiling stranger (albeit aging slightly across the white plaster), had a sense of familiarity.

But more than the decor and sounds of cooking, it was what made its way from the kitchen that brought me back to 8 Tanner Street. That very same smell of raw pasta, onion browning in butter, red wine, and half-empty beer bottles, anchovy oil, and olives. All these individual elements seemed to stew together, venturing from between the kitchen arches and into the dining area. This specific combination was the very same which had clung to my grandfather and the home where he had raised his family.

My grandfather was not from an Italian background. Like many Australians who labelled themselves Australian, he had some Scottish, or maybe Irish ancestry, way, way back. A typical mid-twentieth-century man, he never cooked or cleaned, leaving these duties to the woman in his life. But having lost her battle to bowel cancer in her late fifties, my grandmother’s death left him with a once inconceivable task: self-sustenance. So, he tied her old plaid apron around his beer-gut, pulled out her recipe cards, each pockmarked with her fading black scrawl, oil and flour stained fingerprints, and began from scratch. He even went north, braving the heat of Cairns to learn the basics from his mother-in-law, a shriveled, yet tough-as-nails type, who had just buried her only daughter. I will never know if he got close to my grandmother’s standard, but I can say, with a touch of pride, he was damn close to what came out of that boisterous kitchen, deep in the Florentine streets.

I still remember the seemingly infinite strands of raw pasta stretched across the kitchen table, flour permeating the air and never truly settling. The pasta sitting in front of me has that same yellow color and soft bite: al dente. The other dishes are an assortment of things I had seen before but always believed were just the strange incarnations of my grandfather, never really belonging to traditional cuisine. Rice and cabbage soup, tripe, roast beef and potatoes, grilled veal chops. Each dish was separated into smaller portions and haphazardly spread across mismatched sets of bowls and plates, presentation of no real concern. But each plate of food was warm, tender, and drowned in oil. It all provides something I didn’t realize I had sorely missed—home-cooked food, something that a mother might prepare for her son.

Despite politely rejecting the dessert menu from the young waitress, an elderly man in an extremely stained chef’s coat makes his way over. He bears a great big grin that never leaves his face, his teeth and moustache hairs stained with red wine. The gentleman carries a plate with a single glazed pear, basking in a sickly sweet brown sauce. The way he shuffles his feet and hunches his shoulders reminds me, again, of my grandfather. It’s only when he places the pear down in front of me that I notice he is the man from all the photographs, only a few decades older, and now in full color, all shades of pink and red.

He doesn’t speak English. I don’t speak Italian. But that doesn’t stop him. He gestures to the empty plates not yet removed from the table.

How was the food?

I bring my fingers to my lips and toss them back into the air. I instantly regret this, but his smile only widens.

He continues to speak in Italian, gesturing to the entire restaurant now, waving his arms in towards his chest as if trying to pull everything close in a great big hug.

All this. All this is because of me.

I can only smile.

“It reminds me of home,” I say, hoping he understands.

His smile drops now. He reaches forward and pulls me into his arms. I can smell a blend of beer, red wine, anchovies, and perhaps something else on his breath. He staggers back, holding onto my shoulders. The young waitress makes her way over, prying the old man off me. He accepts this and wraps his arm around her shoulder instead.

“Can you tell him that his cooking reminds me of my grandfathers?” I say to the waitress.

She translates this to the drunk old chef, whose great big smile returns, spitting something back in Italian and snickering afterwards.

“He says that your grandfather must be a great Italian cook,” she says, squeezing the chef’s nose and laughing.

I take a bite of the glazed pear. I have never been homesick before.

Callum Brockett is an Australian writer who recently graduated from a law/arts degree. He spends his spare time scuba-diving shipwrecks, underwater caves, and reefs, filming the diverse sea life he encounters along the way.