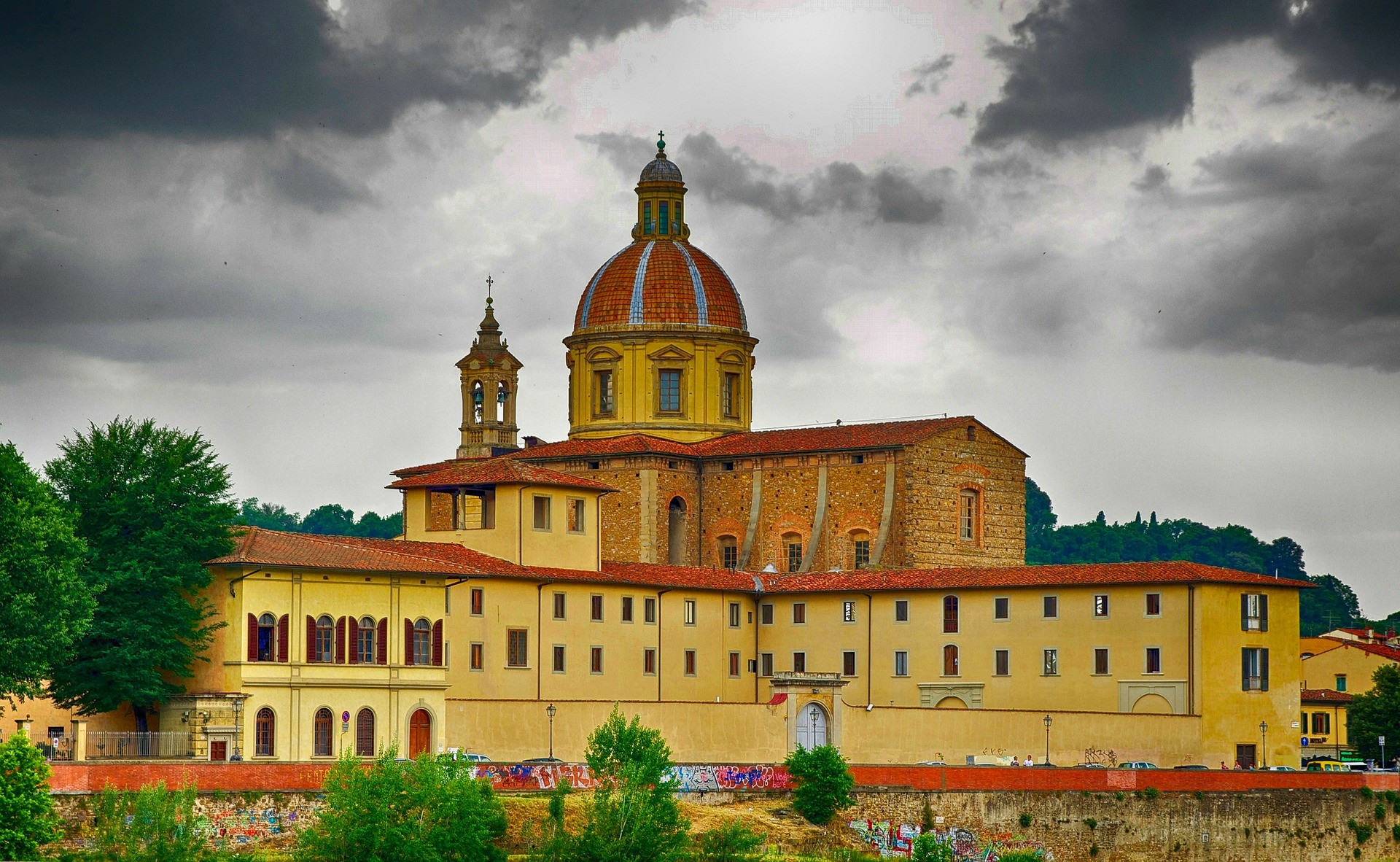 In 1965, a jaded seminarian confronts the realities of his chosen career when he leaves his university in Rome for a brief but eventful vacation. This story was chosen as a runner-up in our “Unexpected Adventures” travel writing competition.

Late September, my third year in Rome. I was in a funk. Another year of dry theology classes at the Gregorian University stretched before me. More importantly, the subdiaconate and the promise to live a celibate life loomed on the horizon in a roiling cloud of doubts.

“I need some space…get my head around classes…and stuff,” I said to a classmate across the table from me.

Mark looked up, slowly chewing his mouthful of cornflakes to the white-noise buzz and TINK, TINK, TINK of 280 seminarians working their cereal bowls. Then he nodded. “Yeah. That’s what we need…a watershed vacation.”

“You get Galen’s backpack and sleeping bag for me, and I’ll get permission.”

On the way down the hill, in civvies, heading for the bus stop, I asked Mark, “Where to?”

He shrugged then unfolded our map on the wide stone ledge overlooking the Tiber. He ran his finger east across Italy to the Adriatic coast. “How about Pescara? Get there today. Spend the night on the beach. Come back through l’Aquila. Maybe catch Gran Sasso. It’s where Mussolini was supposed to have hung out during the war. I heard there’s a tram to the top of the mountain.”

We hopped a bus to the outskirts of Rome and began hitchhiking. About two in the afternoon, we caught a ride in a Lancia and crammed in with three other passengers. The two in the front seat hunched their arms and shoulders to accommodate the ample sprawl of the driver who scratched his three-day-old, white-bristle beard.

“Pescara. I’m a shoe seller. These lazy bums are my salesmen. I drop them off in the morning and pick them up on the way home at night. So, tell me boys, have you been hitchhiking all this time?”

We waited out the moment of silence that typically followed that bit of information.

“You know what I hate worse than the plague?” the driver asked his captive audience. “Priests. Priests and their helpless religion. ‘Pray brother—it will get better.’ ‘You poor? —pray!’ ‘You sick? —pray!’ What useless pietistic frauds.” Still fuming, he pulled into a gas station in the pouring rain. The attendant got soaked in the short dash to the car. “Fill her up. Sorry you got wet. Say a prayer and you’ll get dry.” The driver glanced over his shoulder to drive home his point.

“Signor’ Mario. I guess nothing in life is free. We get a free ride to Pescara—we have to pay by listening to your love for clerics. This ride may be cheap, but it isn’t free.”

Mario smiled and chuckled in agreement. “Beh, hai ragione—good shot. But what kind of songs are you singing me here? How come you’re not wearing robes like good clerics?”

I chipped in, “Are you kidding? There are too many priest-haters out there. We’d never get a ride.”

Mario warmed up to us as he dropped off his workers one by one along the route. The Lancia climbed and occasionally slid through the rain-slick Abruzzi mountain roads. “So, tell me,” the driver continued, waving his hand toward me in the back, “how are you going to get along without women? Hell, you’re a hot-blooded Sicilian.”

“Aah, well, good luck. What a shame. What a waste.” Looking over his shoulder he sought out Mark. “O, Marco, did you ever notice that priests have brown eyes—the white part—brown. They say if you don’t make love regularly, it backs up on you—makes your eyes brown. I can’t see. It’s dark in here. You boys got clear eyes?”

“I can tell you this,” I said. “If we don’t stop pretty soon my teeth are going to start floating.”

“Poco tempo—couple of minutes we’ll be at my mother-in-law’s. Got to pick her up to stay with us for a few days. You can get out there, meet the in-laws, take a piss.”

“Piacere,” the old man mumbled, “you want something to eat?”

The old woman in gray cotton socks and felt slippers shuffled to the sideboard. “Of course they want something to eat. Young men are always hungry.” She returned with a bottle of wine and a shoebox half-filled with dried figs.

As we drove into Pescara, the rain let up and the sky cleared. “Mario,” Mark asked, “where’s a good spot on the beach to camp out for the night?”

“Just up ahead a couple blocks. Hey, you boys want a beer? My treat.”

“No, we’ve imposed enough. But thanks for the ride,” Mark said as he fumbled for a fresh pack of Luckies. “And here’s some cigarettes.”

“Thanks,” Mario said, then smiled mischievously. “Tell you what. Maybe I can find someone to warm up your sleeping bags—get you to change your minds about the priesthood…”

We rolled back in our sleeping bags to face the stars over the Adriatic. The red spot of the Lucky Strike glowed at the edge of my vision. Far down on the right, gentle rollers reflected the last of Pescara’s nightlife. Finally, the cigarette traced a gentle arc and landed with a hiss.

I sighed. “As if it were all about getting laid.”

“Don’t overthink it,” Mark said. “Celibacy is just another rule—one more hurdle. If you want to be a priest…just get over it.”

I propped on one elbow. “Rules, rules, rules. ‘Do this.’ ‘Don’t do that.’ ‘Disagree if you want. Just do what you’re told.’ They want to be sure we’re the kind of guys who will never resist, always follow the party line.”

“Uh huh. Your point being?”

I paused, rolled back over, groped for a rock poking under my ribs. “Sometimes I think if we ever seriously broke one of the rules—not ‘oops, I’m sorry, slap my wrist’ but consciously, straight forward, ‘I broke the rule because it doesn’t make sense and I chose not to follow it’— it would be like pulling a thread out of a sweater. The whole deal would unravel.”

About 5:30 it started to drizzle. We packed up and trudged into town. Over a capuccino and cornetto, we decided to make for Gran Sasso.

Two hours and one ride later, the traffic got thinner and thinner as we hitchhiked up the mountain. It wasn’t until 2:00 in the afternoon that we finally reached the cable car station for the last leg to the top. As we cleared the first ridge, we were enveloped in a cloud bank. Couldn’t even see the lodge, let alone the view.

We looked around the lobby, stared at the huge windows socked in with fog. “When does the next car go back down?” I called to the desk clerk.

He looked up from his crossword puzzle. “Thirty minutes.”

I flopped into a cozy armchair. Mark curled up on a window ledge lost in a cloud of cigarette smoke blending into the whiteout beyond the pane.

The way back was just as bad as the way up. No hitching. Lots of hiking. Finally, we had to catch a bus that got us into Rome well past curfew.

Outside the locked gates to the seminary, we lined up under a special spot in the wall to begin the alternate entry: chin-up to the top of the wall, walk the ledge of Spanish tile, drop down eight feet, hop the service elevator, hat over the freight elevator port holes as it passed each floor. Mark made it up, waited for me. I got my hands on the top of the wall and slowly pulled myself up till my arms were straight, ready to swing a knee over. But I just hung there for a long moment.

I pushed off and dropped back down.

Mark’s face poked over the edge. “What?”

I stared back. “I’m not doing this. I’m twenty-five years old. What the hell am I doing hanging onto a wall in the middle of the night, trying to sneak into the place where I live?”

I picked up my knap sack and started down the hill. I turned to Mark’s face illuminated by the street light. “Tomorrow morning I’m going to walk through that gate. If they don’t like it, they can throw me out.” Then, I continued down the hill, footsteps echoing in the mist like steady drops from a glacier melt starting down a watershed.

A former corporate trainer and writing instructor, Joe Novara and his wife live in Kalamazoo, Michigan. Writings include novels, short stories, a memoir, poems and articles. Check them out at: https://freefloatingstories.wordpress.com/