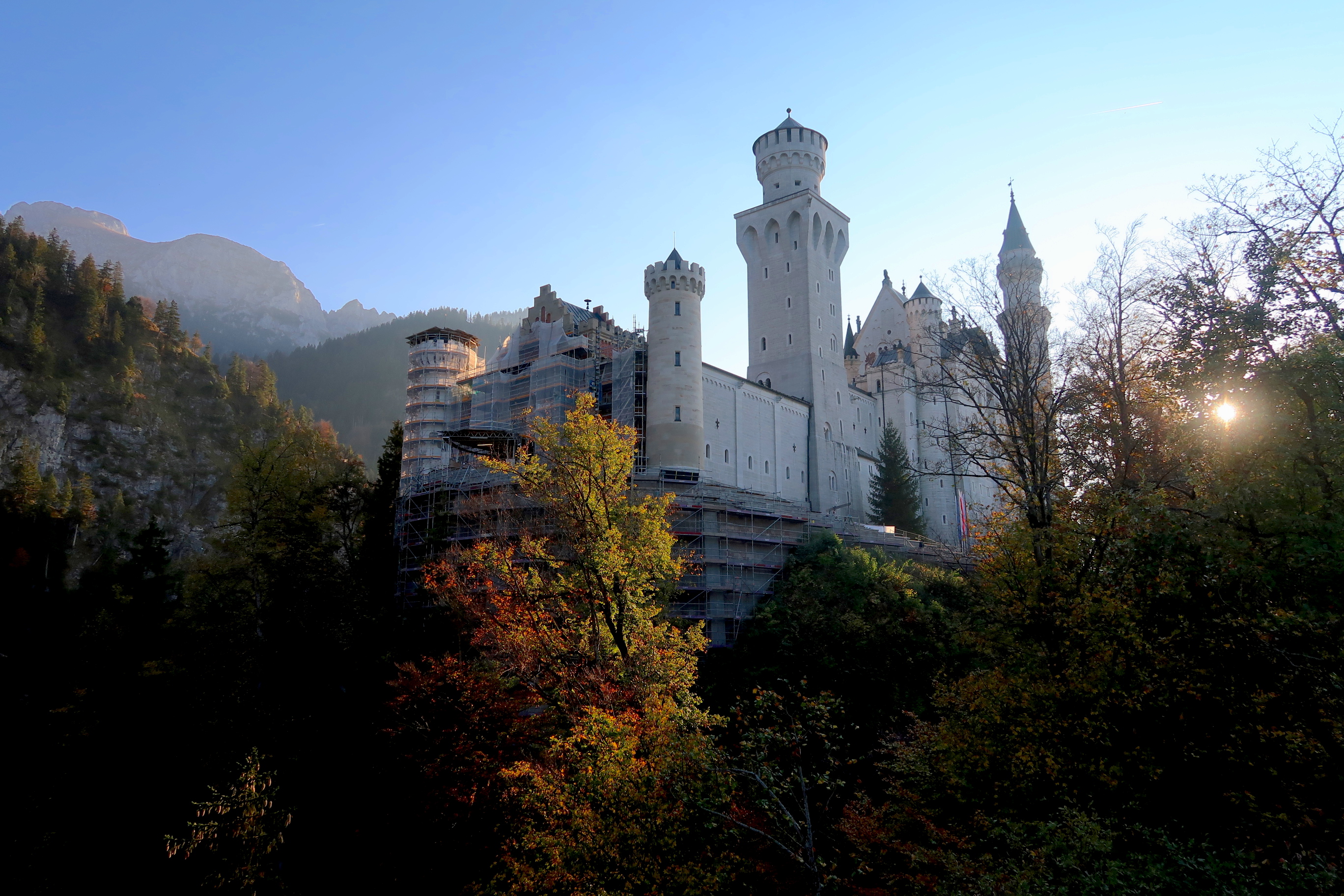 A stroll through the mountainous Bavarian countryside towards Schloss Neuschwanstein – the castle that inspired Disney – proved more daring than this writer had anticipated.

It was a beautiful, bright, crisp Autumn day, and the orange leaves lining the highway were burning holes in the blue sky. I was excited. We were going on a Bavarian road trip for a walk to the ‘yellow wall’ and then to the castle in the Alps that inspired Disney.

The straight, flat road turned into smaller countryside towns, with picturesque traditional houses and people going about their everyday business. From Schwangau, a stretch of flat fields sat between us and the mountains. The jagged peaks cut bluntly into the sky, and the colours of the Alps were better than on any postcard. My eyes settled on Schloss Neuschwanstein – the castle – sitting proudly beneath these on a small peak of its own.

A small dirt track took us through a field in the bright sun and abundant quiet. Cows mulled around us, and I heard a familiar, distant, irregular chink, chink, chink as the bells on their necks echoed their movements. 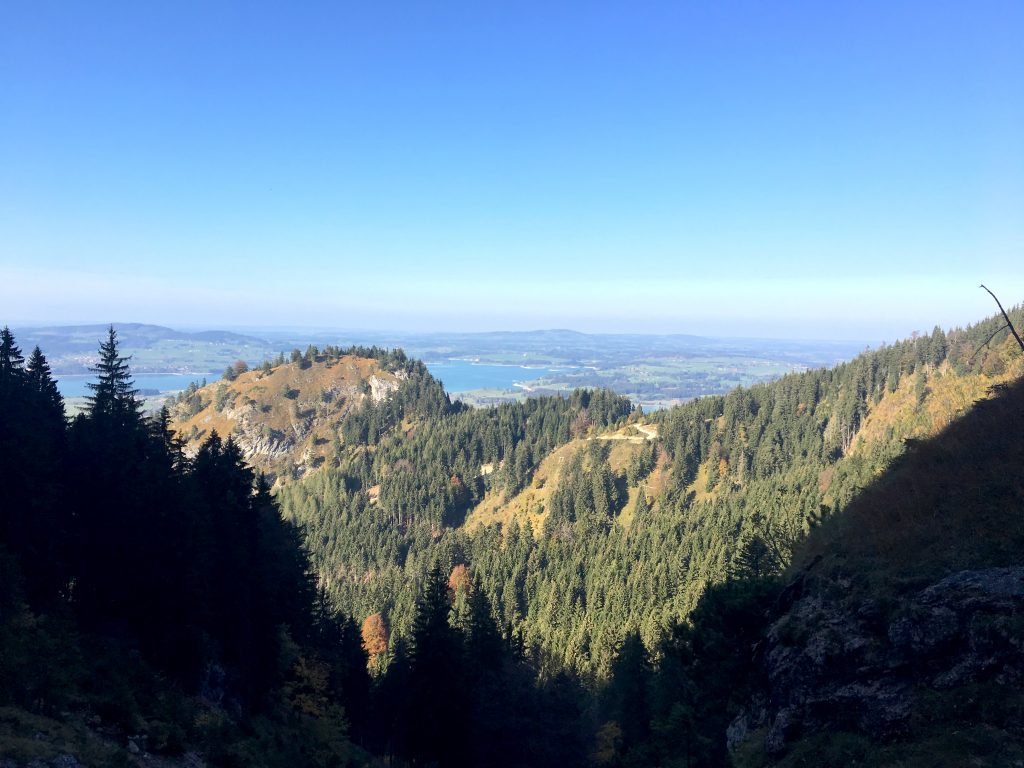 The Alps in Bavaria

As we reached the foot of the mountain where we were to walk for about half an hour, we paused to eat our classic Bavarian bretzels – a crusty but soft, salty bread that looks like a giant pretzel. Inside was cheese from grass-fed cows from the fields around us. As my German buddy checked a German sign, I started the long walk up the leafy track towards the surprisingly steep peaks.

The track soon turned into gravel. We crossed a dry stream, hauled ourselves up steps as high as our waists, and grabbed at (small and unreliable) pieces of foliage for balance. The bed of nature beneath our feet threw us rocks, tree roots, thousands of fiery leaves, and sometimes a detour where the land had slipped.

Half an hour had long since passed, but I was still eager to keep going to get to the top. At one point it was time to cross a stretch of rock straight across the mountain that was somewhere between horizontal and vertical, on the steeper side. It looked a bit sketchy.

This was clearly not just a stroll in the park. We arranged the kits in our bags so that in an emergency we would both have water, food, and a mobile, while people with helmets and climbing ropes passed us by.

We scaled across this piece of rock with much athleticism and grace (or that’s how I imagined it) only to encounter some even steeper stuff that now had an iron rope for climbers to clip onto. Without any gear (or mental preparation), we took a moment to enjoy the view before going any further. It really was beautiful. We had emerged from the forest to look over the tree tops below, to the blue-ish lakes in the distance and the green fields beyond. Underneath us was pure rock with a few trees up on the mountain above us.

Presented with few options and with an eye for adventure, we started to traverse the rock in front of us, which was now a lot more vertical than horizontal. With strong grips on the rope and agile bodies, we hauled ourselves up about a hundred metres at a slow pace, where we stopped again to assess our situation. Was this really a good idea? We looked ahead at a big rock with a ladder on it and the few people that had passed us earlier clipping on with their safety gear. Wisely, we decided we were far more enthusiastic than prepared, and in the interest of self-preservation – for emergencies in Europe call 122 – we started to head back down.

Of course, the cliff had other plans. 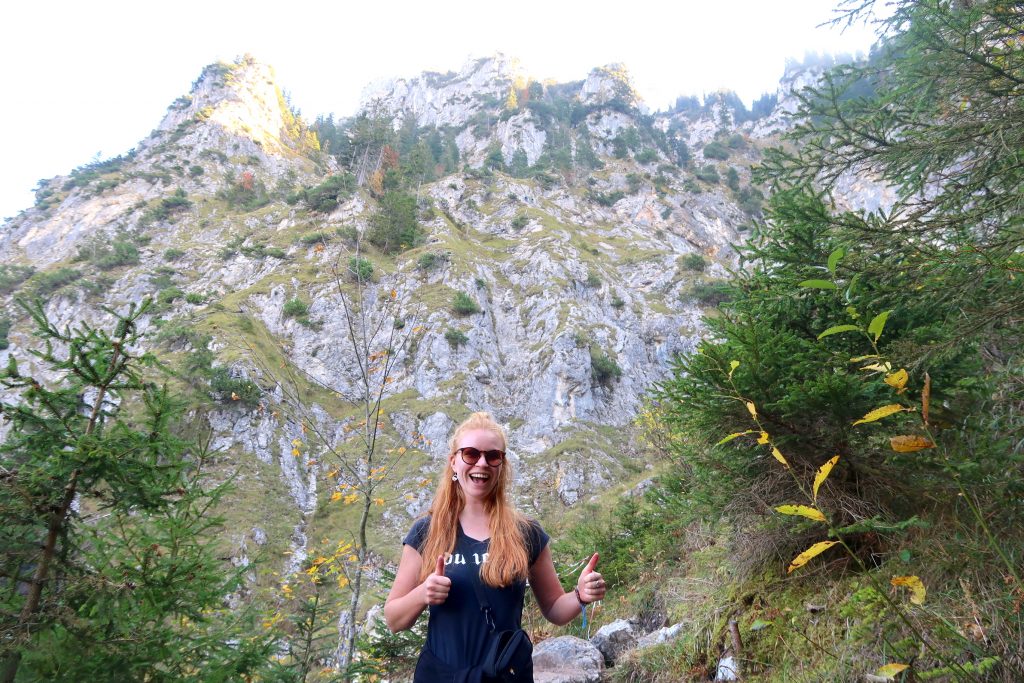 The author at the Yellow Wall

At one point I had my leg up above my waist, the other dangling below searching for a safe place to nest, with hair hanging in my face – and I burst into a fit of giggles. My buddy looked up at me worriedly and asked tentatively what was so funny. I tried to articulate…

Every day we wake up in the morning with a whole day in front of us, a blank page for us to write our story. Sometimes we know roughly what will happen; sometimes we don’t. This was one of those days that I thought I knew what was in front us, and yet several hours later I had hiked up a climbing trail and was clinging to a cliff-face on the Yellow Wall of the Alps.

As we got ourselves back safely into the forest, adrenaline was running high, and we raced happily up the comparably small peak to the castle. Unfortunately, it was closed by the time we got there, so we could only gape at its beauty from the outside.

It turns out the day trip was nothing like I expected, but this tiny area of the Alps left me breathless nonetheless. We definitely took the path less travelled.