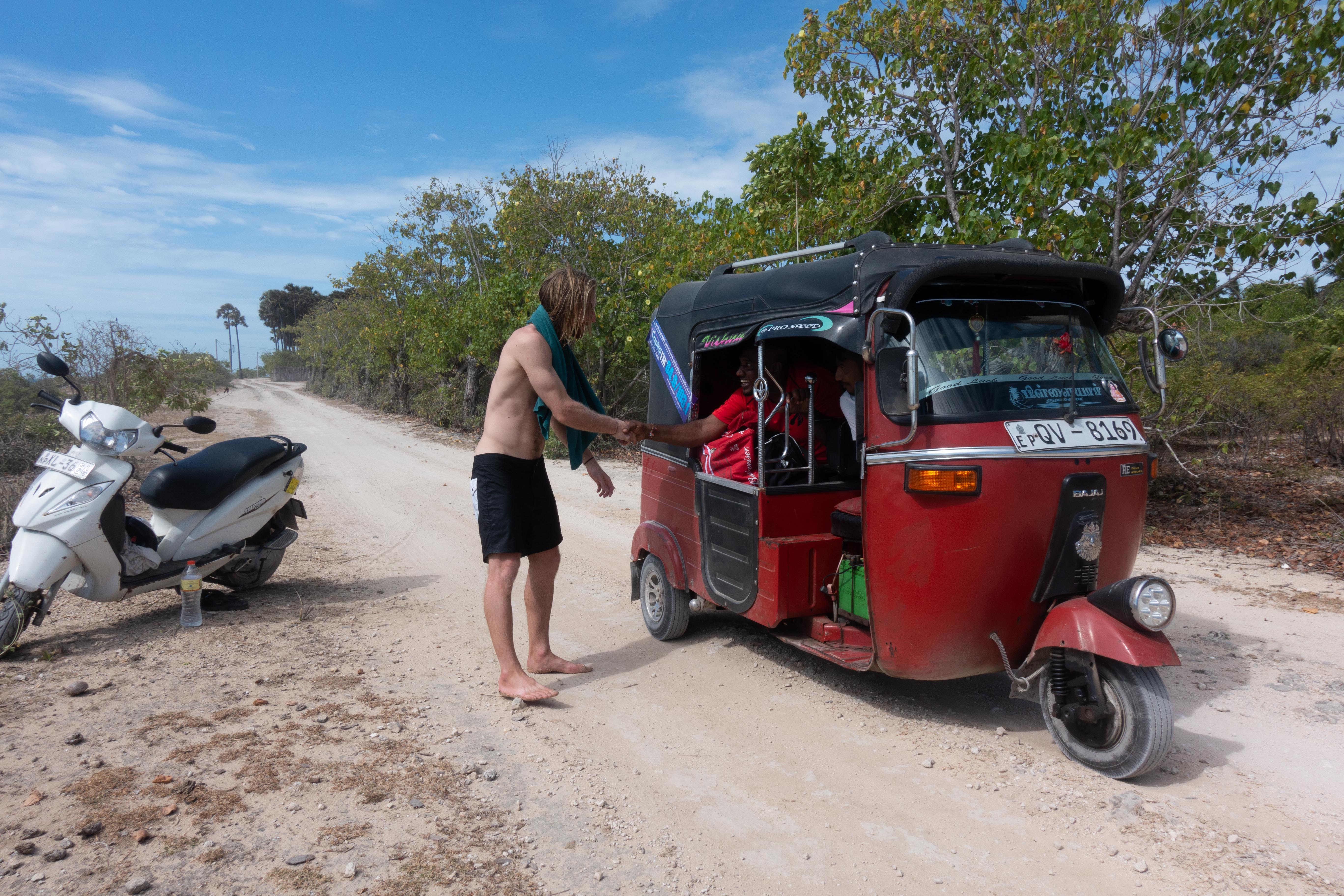 The Choice to Stay

In a land scarred by civil war, our writer discovers the warmth of Tamil hospitality and is given a choice that his host never had.

A bright red rickshaw spluttered, coughed and came to a stop. Out shot a hand from the passenger cabin. I shook it.

“Hello! What are your names?” asked the owner of the hand. His smile glowed brightly from the darkness of the cabin.

“I’m Elanko!” he beamed. His English proficiency surprised us. We’d become fluent in that odd form of sign language seemingly spoken by all travellers when interacting with the local population. Here, it wasn’t needed.

With the same piercing smile, he gestured down the dusty track and turned back to face us.

“My house is this way. Come meet my family, please!”

I cast a furtive glance at Kye; the midday sun beat down hard, and our skin was turning an ever-deepening shade of pink. He nodded his approval.

With sweat-streaked brows and the hope of shelter, we followed in the rickshaw’s fumy wake, our rental scooters struggling over the rock-strewn path. India was to the west, the Sri Lankan mainland to the east. We were on an island, somewhere in-between.

Leaping from the rickshaw, Elanko shepherded us through the front gate. He was middle-aged and stout, with dark brown skin and a voice like thunder.

We stepped into a yard with a hard-dirt floor. Beyond it was Elanko’s house, a sprawling white island in a sea of green. In the shade of a veranda sat several people who, unfazed by our foreignness, begged that we join their little congregation.

These were Tamil people. Predominantly Hindu, most of the world’s Tamils reside in India, but a significant population also inhabits Sri Lanka’s northern region of Jaffna. We, Elanko told us, were on Nainativu, a small, palm-fringed island off Jaffna’s west coast. He had been raised here by his parents until the early 1980s when the nation collapsed into a state of civil war; the Tamil Tigers militant group had entered into open conflict with the Sri Lankan Government, desiring an independent homeland free from the control of the island’s Sinhala Buddhist majority. Fearing for their lives, Elanko fled with his family to Canada. This was the second time he’d returned to visit since hostilities ended in 2009.

Arrack flowed freely among the group as the sun lowered in the sky. From the house came women bearing the makings of a feast: conch meat, fresh from the shell; pots of rice and aromatic curries, heaped to delicious excess; and, for dessert, bowls of sweet-scented fruits, of which the rambutans were a standout delight.

It was some time later before we regained the ability to move. Patting his belly and releasing a dignified belch, Elanko lifted his head to speak:

“I have a boat. Would you like to swim?”

Discussion wasn’t needed, and no more than a half hour later we were skidding across the turquoise waters of the Palk Strait, a narrow stretch of sea separating Sri Lanka and India. A shout from Elanko to the teenage helmsman (his nephew) saw us drop anchor. Looking southward, he frowned.

“That is Delft. In 1985 the Navy boarded a ferry there on its way to my island. Only villagers were on board—no Tamil Tigers. Children, too. The Navy chopped them up with machetes.”

“No good,” he said, shaking his head.

Disturbed, we muttered awkward condolences—words cannot mitigate the horror of massacres, nor the profound emotional and cultural scars they leave behind. We later found out Elanko was referring to what has become known as the Kumudini boat massacre, an event that Amnesty International has implored the Sri Lankan government to investigate; as of yet, not a single person has been brought to account. The massacre aboard Kumudini forms part of a long list of atrocities carried out by both sides during the conflict, with civilians often the victims. In recounting that tragic day, Elanko did not seek to elicit pity, nor did he wish to frame Sri Lanka’s complex communal history as black-and-white. What he did wish to convey to us, it seemed, was a measure of how far things had come. His island home, which had less than a decade ago been locked in bloody conflict, was now a place he could share and enjoy with two young travelers from across the globe—at least for now.

It was sometime later back at the house that Elanko approached us. The sun was setting, and we were preparing to leave.

His hospitality had reached new heights. Politely, we declined—friends were expecting us in Jaffna—but the warmth and kindness of this man moved us immeasurably, for it was in this invitation that he gave us a choice—a choice only he knew the true value of, and a choice he never had.

The choice to stay.

Noah Shaberman is a cash-strapped student with a voracious appetite for travel. When he's not studying, you'll often find him exploring the inexpensive shores of South Asia in search of waves and the cheapest, tastiest street food there is.