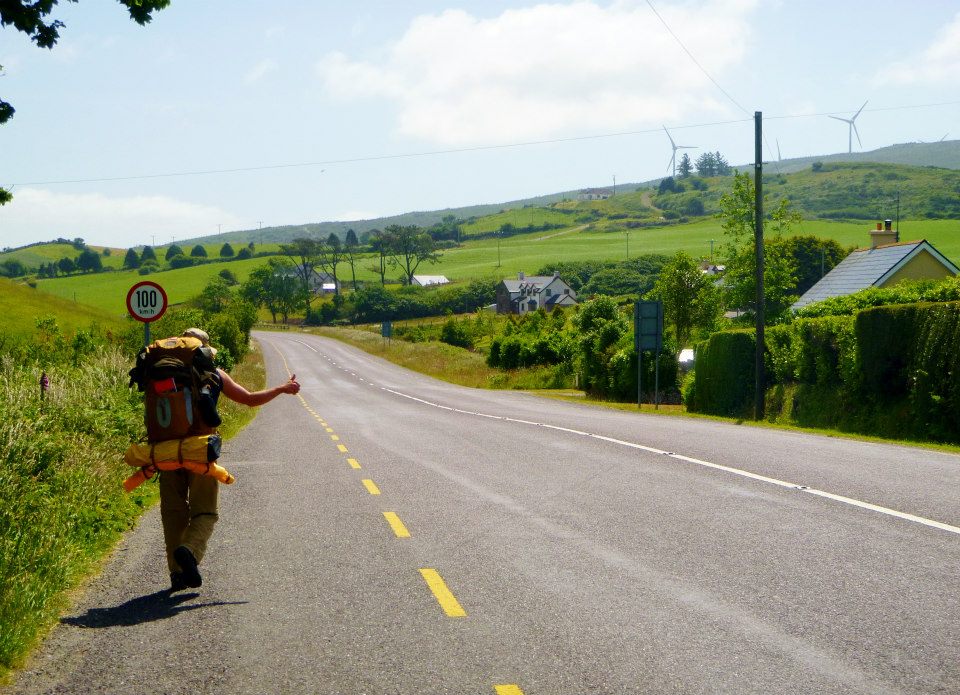 Fear and Loathing on an Irish Highway

While hitchhiking in Ireland, our writer stumbles upon a simple realization: we’re afraid of the wrong people.

Our first time out of the country, my brother Ben and I spent months hitchhiking around Ireland. Dozens of cars, a cross-section of Ireland: a bed-and-breakfast owner, civil servant, a university student. Men and women, all ages and professions. People’s lives flashed by as we jumped cars like stepping stones across a river.

One sour young man wanted to know if we’re scared of being robbed by the gypsies. I told him I didn’t think we’d come across any. He snorted in disbelief: “Jaysus, lads—the Gypsies, the Travellers, feckin’ Tinkers! Don’t trust ‘em. They’ll rob you blind or worse.”
“But who are they? How do we know?”
He spit out the window. “You’ll know. They go around in feckin’ horse-drawn carts, live in these big camps around the edges of towns. Something different-looking about ‘em too. Just don’t trust ‘em.”

Most drivers were genial and chatty; some invited us to dinner or to stay in their houses with their families. Others were suspicious. But only one stood out as a truly bad ride.

We were on the side of the N24 to Kilkenny, where our previous ride dropped us off. A bad spot: too fast, too little shoulder. It’s illegal to hitchhike on a motorway, so we had our thumbs out nervously, expecting to be stopped by gardaí any minute. It was raining and cold, the road long, wide, and wet as a river. Cars rocketed by.

We stood there aching when a tiny white car passed us, pulled off the road, and then, to our surprise, went in reverse on the shoulder and stopped beside us. I jumped in shotgun (in Ireland that’s on the left), crunching paper cups and bags, and Ben got in the back. We introduced ourselves to the driver.

“Andy,” he said through a cigarette and peeled the car back onto the motorway. He looked like a stray dog crouched over the wheel. Middle-aged, an outdoor-worn face, strong hands with dirty fingernails. The standard questions of where we were from, where we were going. I was settling into the answers when he interrupted, “Do you drink beer?”
“Sorry?”
“Beer.” He didn’t wait for my answer but reached down and handed me a can of Tudor’s, tossed one back to Ben, then cracked one for himself. “To new friends,” he said.

“So, Andy, where are you from?”
“Just outside Kilkenny. Got me a little dairy farm. Lovely town, Kilkenny. You lads would love it there. Don’t bother with Dublin, nothing but feckin’ gobshites there.”
“Do you have any family there? Married?”
“Not married, no…”

Andy trailed off, then through a yellow toothy grin said, “The girl I’m with now, when we first moved to Kilkenny, we pulled this trick in some of the pubs…” As he talked, Andy flicked his cigarette and reached in the glove compartment for a pouch of tobacco and rolling papers. He put his knees on the wheel and rolled another cigarette on his lap.

“Anyway, she was getting chatted up by some rich-looking fecker. I pretend that I’m her brother. So now this ugly feck’s buying both of us pints.” Andy glanced between his lap and the road. “Would you like me to roll that for you?” I asked. “No no no, it’s no trouble. So he’s buying pints and goes to take a piss. Me and me girl go out front for a fag. She thinks it’s all a grand joke and kisses me. So we’re shifting and the rich fecker walk out and sees us, I’ve even got your man’s beer in my hand, righ’. The look on his face! ‘E says, ‘With her brother!’”

We laughed uproariously and Andy reached for another beer. Two beers, so what, you’re not drunk after two beers… The car screeched onto the shoulder and Andy got out. “I’ve got to take a piss,” he said, slamming the door shut.

“This guy’s scaring the shit out of me,” Ben said. “Look, it’s not the safest ride we’ve taken, but he’s only had a beer and a half. He’s not driving too crazy, and we’re making good time to Kilkenny.” “No, listen, there’s an empty six-pack back here—” The car door opened and Andy sloped in. “Ahhh, we’ll get you there, lads!” He grinned, under at least eight beers of good cheer.

Another cigarette and the car screeched back onto the road as the speedometer went up like a pressure cooker into the triple digits. “Feck, I know a good guy in Kilkenny, he’ll put you up for the night. Good, solid guy. Feckin’ alcoholic, but solid.” The car sped down the narrow side roads, barely wider than the side mirrors. Andy began to sing low and gravelly, “Waaay out upon the Swanee River, far far away…” A T-intersection appeared ahead— much too close, too fast! I looked over and Andy was trying to roll another cigarette on his thigh, one hand on the wheel. “Andy!” I shouted. He looked up and screeched on the brakes, we skid out into the intersection. “Feckin’ hell, where did that shite come from?” Cascades of adrenaline ran like cold water down my back.

“Waaay out upon the Swanee River…” Andy sang through a cigarette. I was plastered to my chair, soaked in ice water. No peep from the backseat, Ben was as petrified as I. A sign whipped by: Kilkenny 20 km. God, we’ll be mashed into oblivion long before that!

A new fear: what if Andy refused to let us out? I wanted to be anywhere: a burning building, the middle of the ocean, a desert island— anywhere but the inside of that car. “Hey, Andy, these are some great camping spots we’re passing up, how about just dropping us off here?”
“Naw, I’ll bring you to this guy. He’s solid as feck, you’ll see.”
“No really, Andy, that’s a great spot right there. Just right THERE!”
“Eh, if you’re sure.” The car screeched over and we stumbled out into the drizzle like escaping prisoners. Andy careened off. I kissed the sweet Irish earth. Alive!

Ben and I sat on the shoulder letting the adrenaline diffuse. Another car stopped for us, before we even stuck out our thumbs. To our relief, it was an old gentleman who preached to us about the evils of alcohol.

Kilkenny. Strange night in a strange town with no plans, no acquaintances, not enough money for a hotel. So we walked back out of Kilkenny. Exhausted, heavy, just wanted to stop and rest for God’s sake; just needed a spot of flat ground wide enough to pitch a tent in. But the rows of houses went on and on, every inch of land spoken for. We don’t belong.

Out at the edge of town there was a break in the fence of a wheat field. A dirt path. Our vision was only as wide as the little circles of light from our headlamps. Silhouette of a big building under a sliver of moon. We’ll just go up and ask; if they refuse, we’ll move on, no harm done. Wheat rustled and swished against our clothes, acres and acres of wheat. Something was odd though: no warm lights, no car. The building was huge—a farmhouse? The circles of light seemed to spray detail onto the scene. Countless windows, every one with rotten boards nailed across it. This place, though, has not been accounted for and claimed. This is the edge, where travelers belong.

“Hellooo?” I called into the dark, voice sounding both tiny and large. Wind. We camped around back. All is quiet, no one here.
Or so we thought.

In the morning I stepped out for a look around and realized there were people on the other side of the house. I ran back to the tent and shook Ben awake. We stripped down the tent, threw everything in our packs and started speed-walking out the back, grateful for the tall wheat. Five figures, maybe more. Horses. They were distracted, not expecting two strangers running through their backyard.

“They’re gypsies,” Ben whispered, and of course it made sense. I felt a strange pang of fear and suspicion, the virus passed to us days ago by the sour young man.

We were stone’s throw from the fence: no tall wheat here, any second they’ll turn and see us—no, we were over, undetected. Down the road came a horse-drawn cart with two young boys, clearly brothers. Old, patched clothes, and unruly boy-hair. Two pairs of brothers across from each other on an otherwise empty road in Ireland.

The older one asked us questions, blunt but not unfriendly, in a strange accent not exactly Irish, “Whir ye from? Whir ye gooin?”

He was no more than fifteen but had fiery eyes and the stern hawk-face of an older man. I saw the mirror of who I might have been under different circumstances. I saw that we are afraid of those who are most nearly like ourselves and that the most dangerous people in the world are those that are a danger to themselves.

The boy flicked the reins, the horse trundled on, and he hummed low a song that I barely made out, “Way out upon the Swanee River, far, far away…”

Joe lives in Haines, Alaska, and is a librarian, wilderness guide, writer and firewood chopper. Find more at https://jaultmanmoore.wordpress.com/ and follow Instagram @joeaultmoore