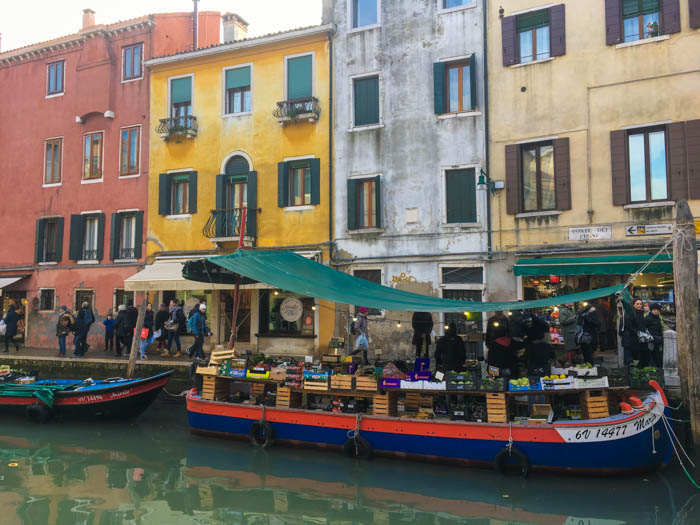 20 million tourists visit Venice every year. However, Lisa Watson discovers that it is still possible to get a feel for local life – all you have to do is listen.

We are sitting in a back-alley restaurant decorated with dark wood and heavy brocade curtains. The Venetian dialect eddies and swirls around us. My Italian husband looks at my puzzled expression and shrugs. “No, I don’t understand anything either.” As we eat Sarde in Saor, the old man at the next table hears our jumble of languages. He breaks into Italian to find out why we are speaking like Babel-fish and then says:

“I was born in Venice. I lived in Texas for a while, but I missed the water.”

We find out that he comes to this restaurant every day for his lunch. He likes it because it is so well hidden that usually only locals come here. “It’s like my familia. See that waiter there?” he says, pointing to a grizzled man serving diners a few tables over. “He started working here when he was straight out of school. He’s a foreigner, but he’s a bravo ragazzo.” We ask where he comes from.

“Oh, far away. Way to the west from a town called Milano.”

We decide that we have picked a good place to eat when we see a group of gondolieri troop in to have lunch. They hang their hats on the backs of their chairs before sitting down. The foreign waiter greets them by name, speaks to them in the Venetian dialect, and then heads for the kitchen and brings them back piles of food without asking them what they want.

A couple of stray tourists a few tables over try to order a cappuccino after their copious lunch of cream-smothered tortellini with ham and peas, followed by a large helping each of tiramisu.

“Scusate, but is not possibile,” murmurs another waiter politely in broken English. “No milk. Only small espresso possibile after….” he breaks off, gesturing towards the empty plates on their table. The waiter turns away from the table and rolls his eyes in the direction of the old man. The old man pokes my husband in the ribs and shakes his head in disbelief at the visitors who have the temerity to do something so rash as to order a coffee with milk after 11 in the morning.

“Don’t they know that milk is heavy?” He presses the fingers of his right hand together and, with them pointing downwards, taps his hand against his stomach – the ubiquitous Italian sign for ‘that food will give you indigestion.’

While we wait for the waiter to finish explaining the quirks of Italian food culture to the bemused diners so that we can ask for the bill, I make a paper boat out of the ragu-stained place mat for one of my sons. His eyes shine. “Let’s go float it on a canal!”

Outside, I gingerly start down the slippery, algae-covered steps, holding tight to his hand. A passing postman stops and calls out to me, “I wouldn’t do that if I were you!” I go back to ask him why.

“You see those holes in the walls of the canal? They lead straight from the toilets of all the houses around here.” After hearing this, the kids would spend the rest of their time in Venice gleefully pointing at these holes whenever they saw toilet paper-decorated water gushing out of them.

I thank the postman profusely, and we prudently launch the boat by flinging it from the safety of the footpath. It bobs gently on the murky water towards an arched bridge, where people stop to take photos of it. A passing gondolier deftly manoeuvres his gondola around it and gives it a helping hand on its voyage by touching it gently with his pole. My son leaps for joy and punches the air with his fist. The gondolier winks as he glides past. A boat-taxi steams up the canal. The tassista driving it swerves to avoid the paper boat, then salutes my son.

Finally, the valiant little craft meanders off down a side canal, followed until it is out of sight by the clicking camera-phones of a large herd of sightseers led by a harried-looking young woman holding an umbrella aloft. “Please, this way!” she calls out, her voice breaking with the strain of shouting over the roaring engines of a passing flotilla of taxi-boats. “OVER HERE!” she screeches, finally capturing the attention of the group. Most of them straggle off after her bobbing umbrella in a disorderly bunch and disappear around a corner. Two older men from the group who have been engrossed in looking in a shop window at genitalia-shaped pasta suddenly look around in panic when they realize that their protector is gone. They shoot panicked glances in every direction, and then one of them whips out his cell-phone. “Marge! Where are you?” he wails. He hangs up and they scurry off in the direction of their pack.

When we arrive at the apartment we have rented, the owner proudly shows us around. It has been in her family for four generations and still has many of the original furnishings. We tell the kids to keep their hands behind their backs. She tells us that she left Venice to study music when she was younger, but homesickness brought her back.

“It’s very difficult for a Venetian to leave. You don’t feel whole until you return. It’s in your blood and there’s nothing you can do about it.”

She then spends the next hour explaining how the incredibly complicated trash system works in the city. We are led through a maze of instructions on which type of trash we should put out on each day and whether it needs to be put in a special trash-can, on a boat, or inside the front door, depending on the contents and the day of the week. She then explains that there is a different boat for each type of recycling; then the specific days of the week each one moors nearby; then the instructions to get to these boats that change their mooring, depending on the day that they come. She finishes by telling us that we will get a fine if we do the wrong thing on the wrong day. With our heads reeling, we stumble outside to have a gelato in a cone so that we don’t produce any trash. We now have profound admiration for the ability of the residents who perform this trash dance every week.

On the day we leave Venice, we pack all our trash and take it with us as we are terrified of making a mistake.

After spending the day wandering around the city, we begin to wind our way through the labyrinth of narrow alleys that make up the backstreets of Venice to get back to our apartment. After much twisting and turning, we realize that we have passed the same carnival mask shop three times. My younger son rolls his eyes at us and takes the lead. He shepherds us unerringly left and right, across a bewildering array of tiny stone bridges and dark narrow paths only wide enough to walk in single file. Within minutes he deposits us in front of our door. We come to the conclusion that he is part homing pigeon.

Later, the boys stalk crowds of real pigeons in Piazza San Marco, trying to scare as many into flight as possible with one shout. My husband and I look at the clouds of startled birds flinging their fat bodies into the air, narrowly missing a flock of teenagers squeezing themselves all into one selfie photo, and then look at each other.

“What’s the bet that this is the only bit the kids will remember?”

Lisa grew up on a sheep farm in New Zealand. As soon as she was able, she followed the gravel road with grass growing down the middle of it that started outside the gate and left to discover the world. Many adventures and countries later, she now lives in France with her Italian husband, writes whenever she can, and travels as often as possible. Lisa has a blog called www.italiankiwi.com that she feeds with posts every so often.