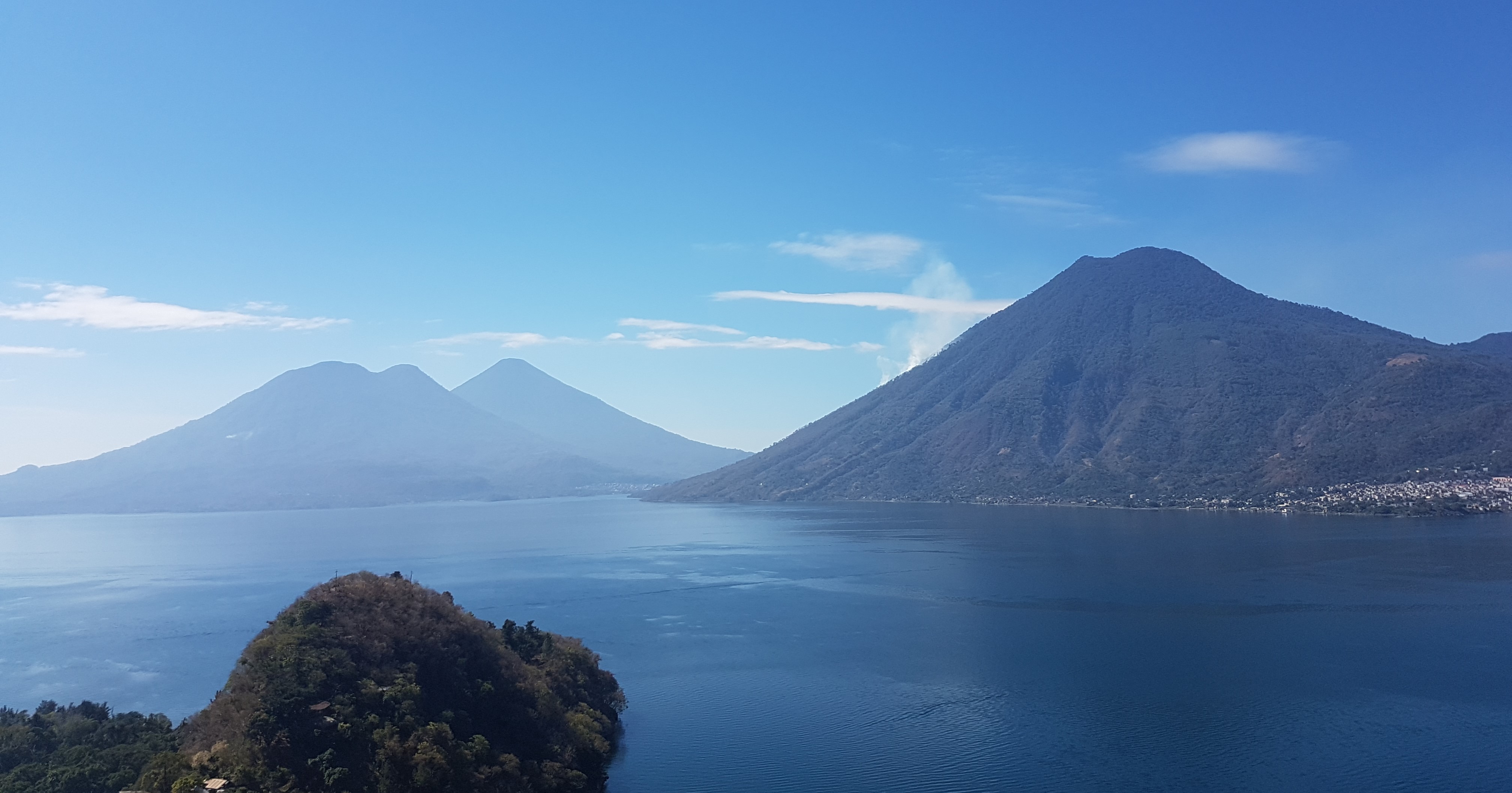 Lightning and lava dazzle a traveler as she observes the power of nature in Guatemala.

Lake Atitlán in Guatemala is no ordinary lake, surrounded by volcanoes imposing their magic on the environment and anyone who surrenders to it. Spending over a month in the hills above San Marcos with this majestic view as my daily scenery was a source of never-ending inspiration, peace, and growth. The lake is home to three volcanoes, with many more dotted around the country. Their characteristic cone-shaped peaks hold histories of past eruptions and, in some cases, a preview of future ones. Though a glance at the panorama might not immediately reveal their volcanic essence, a few weeks in their vicinity certainly does the trick.

During that month, I lived up in the hills in a tree house from which a quiet comfort in the stability of the landscape in front of me prevailed. I had the chance to witness many beautiful sunrises from this perspective. Every morning as the sun made its way past the curve of the hillside to the east, the glint of its rays would align with my face and awaken me with its radiance. Some mornings I would fully awaken, sit on my porch, meditate, stretch, paint, read, and write. Other mornings I would remain under the covers, an observer to the beauty unfolding. Up above, I was ways away from the town and lake, the volcanoes and mountains a backdrop of beauty and power framing the stillness. As the day progressed, the lake would also awaken, its vibrations greater, the movement in its glassy surface visible from above.

As the rainy season began to assert its arrival, the stillness and peace of the land altered as well. Some mornings the rays of sun did not break through the clouds. Other days were spent among the clouds, the outlines of the volcanoes fading away, the lake becoming one with the sky. The first big storm hit with such strength it shook us as much as the earth below our feet. It echoed as one of the most impressive performances of nature I’ve seen live. Lightning flashing through the sky, an electric current rippling in the air – a charge quickly followed by the largest crack of thunder imaginable. In the immediate distance across the lake, a flash so bright and expansive it appeared unreal. It looked as though the earth had split open to expulse the thunderous power and with it emit a primal roar. Shortly after, even closer, a long current of lightning shot straight through San Pedro – the inactive volcano I had summited with my brother earlier in the day. As the thunderous roar reached the earth, it began to rumble and roll, an electric charge seeking balance. Eventually, the storm sought respite, and stillness was found once again.

After one month at Lake Atitlán, I decided to explore more of Guatemala. My first stop was Antigua, a charming historic town near the capital, Guatemala City. A common excursion is to climb the Acatenango Volcano, from which you can see many other peaks, including the incredibly active Fuego Volcano . All packed up for the journey, a group of us set off on the hike. We walked for hours, crossing through diverse terrains and climates, the strenuous steps motivated by the view we hoped to see at the top. As we rose in altitude, the day moved along, and the light changed with the turn of the Earth. Shortly before the campsite, we began to experience the first rumblings of the ever-active volcano, Fuego.

It is one thing to see a volcano from afar, to view its characteristics encased within the landscape of its setting. It is quite another to feel the earth beneath your feet shake, volcanic tremors signaling the imminent arrival of lava flow. Each burst formed large mushroom clouds, and the view was periodically concealed by regular clouds. We reached our campsite facing the volcano and settled in, the magic amplifying as the sky darkened. The eruptions were now visible in their full life and grandeur. With lava and fiery embers burning, the volcano glowed bright red, living up to its name. We watched as a hypnotized audience while we were served dinner by a bonfire. Words are inadequate to describe the extent of the sensations felt that evening. All I knew was overwhelming gratitude for the present, and sheer incredulity at what I was witnessing, a true first.

Many more eruptions followed as we chatted with one of our guides. We reluctantly made our way to the tents for a few hours of interrupted sleep – the volcano more active at night than during the daytime. By four in the morning, we were up again to climb to the peak of Acatenango for the sunrise. The ascent was steep and the cold hard to ignore. As the night changed to day, the view became more visible as its stunning beauty was unveiled from the dark. The lights of the sky transformed from black-navy-purple-red-orange until it was day. The shadows of dusk drifted away as our surroundings became more detailed, no longer obscured by the night. Coming down, the sunlight heated our frozen fingers and toes, and the initial incline was replaced by a sandy, downhill trail. We reached the campsite for breakfast and then commenced the trek back down, all of us that much closer for the night and morning of wonder shared. Goodbye, Fuego.

Lucia is an avid traveler with a particular passion for food and nature. She is always keen to discover a dish or hike in a new destination.