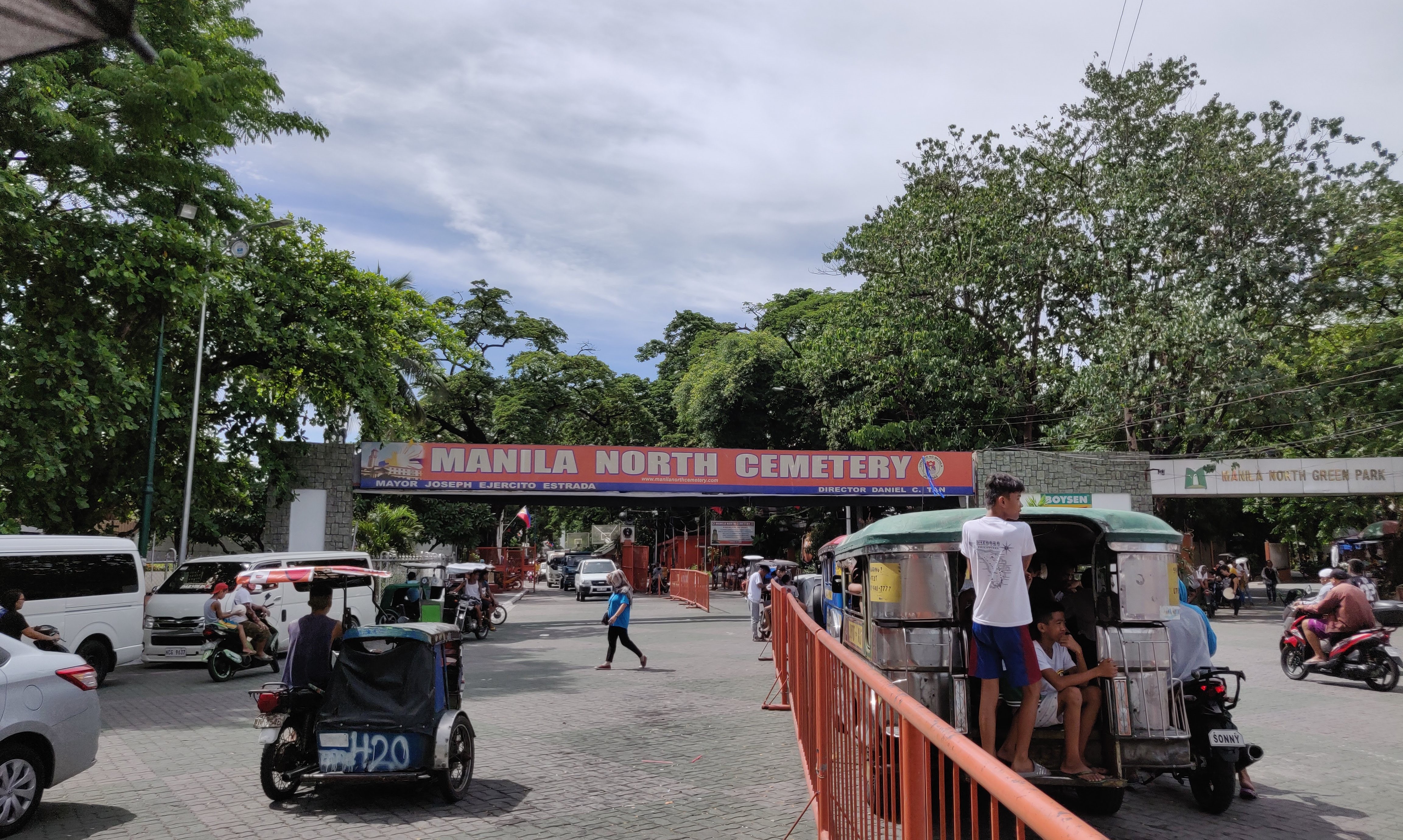 Living with the Dead

By Kate MoxhayDecember 26, 2019Asia
No Comments

In a Manila cemetery, the living and the dead live side-by-side, and our writer wants to know why.

It was a steaming afternoon in mid-summer when I found myself at the gates of Manila North Cemetery drenched in sweat and wondering what awaited me within. Other than the obvious.

I’d read that the cemetery was home to more than just the dead. For years a large community of some of Manila’s very poorest have lived and worked on its grounds, in some cases for generations. Most make a living as either stonemasons or caretakers of the graves and mausoleums, but countless others are simply “illegal” residents seeking to escape the myriad dangers of living on Manila’s overpopulated and dangerous city streets. I found the idea of graveside living both fascinating and mortifying in equal measure. Could things really be so bad that living next to the dead was preferable to living anywhere else?

My guide Marjorie had been to the cemetery many times, showing outsiders such as me just how a place designed for the dead can become so popular with the living. The official number of residents is almost 3,000 families, but, as Marjorie explained, that number is wholly understated.

“It’s nowhere near,” she told me. “I always ask residents, and they say almost 7,000 families now. Each family is typically anywhere from 6-10 people, so with 7,000 families that is approximately 56,000 residents living in the area, both registered and unregistered”. New, unregistered people arrive all the time. Some residents tell on them and they are told to leave by the government but most get through. I could see how anyone could disappear here; the place is huge. At 54 hectares, or 130 acres, Manila North is one of the largest public cemeteries in the city, linking to both the Chinese and La Loma cemeteries. In short, this is a city within a city.

As we entered the gates, so too did a seemingly endless procession of funerals. I had arrived on Independence Day, one of the many public holidays in the Philippines, which also happens to be one of the most popular days for funerals. There is a far less sombre mood to Filipino funerals than is generally customary, at least in Western cultures. I watched as gleaming white hearses pimped with gold hub caps blasted out pop songs while mourners riding scooters followed behind, many wearing t-shirts emblazoned with the face of the recently departed. “We like to celebrate life,” Marjorie laughed. The 90’s hit “Love Shack” played on as we walked.

The long road was lined with impressive, marble mausoleums on either side, some so grand and pristine they had second floors with a bedroom, kitchen and air conditioning units. Others were crumbling into the ground, slowly being engulfed by vegetation. All held the remains of generations of the same family, but some had telltale signs of another very live resident as we passed Clothes drying, food wrappers on the floor and makeshift bedding. But many people legitimately live inside the mausoleums, part of their payment for maintaining the graves of the wealthy families that own them. Marjorie told me the story of one woman who lives next to a particularly impressive grave site. When asked how much she got paid, the woman apparently replied “just enough”, but that her children were all being educated, paid for by the relatives of the grave she carefully maintained. And this is part of the reason why so many people are eager to find a place among the tombs; it’s free, there are jobs and there is a sense of safety here scarcely found in other places where only the poorest live. But that isn’t to say its safe; police raids are not uncommon, and I’d read about tragic stories of disappearances and murders.

We walked on in the blistering heat, past drains filled with dingy green water (there is no proper sanitation here, or electricity) and great towering walls called “apartments” that held the bones of thousands of people. Due to the chronic lack of land, gravesites are rented out on five-year terms. If the family can afford it, around $20 will buy a basic “apartment” grave plot for the first five years, and then if they wish to keep the grave, the price gradually reduces every five years. Some larger plots can hold up to four people at once, with each new body taking the place of another, the older bones placed between the legs of the new body to make space. When there is no more room, the oldest is permanently removed and placed in storage by the caretaker, who carefully labels each set in case the family wishes to return and pay their respects at any time. I asked Marjorie what happens to the loved ones of those too poor to pay the rental costs: “There are free graves, mass graves. One for children and one for adults”.

There are many children that live here, too, but the difficulties of living in a cemetery can spill over into the classroom. Marjorie explained, “Many children are bullied at school. They are called multo (ghost) or zombies. The kids don’t want to go back, so they stop school. They make a living by collecting melted wax from the candles and sell it to the recycling centre to make money”. I found this heartbreaking. Without an education, the next generation had little hope of lifting themselves out of the circumstances they were born into. And the vicious cycle would continue.

We spent the next couple of hours wandering amongst the tombs, stopping to chat with residents along the way. One family who had been there for 16 years had managed to purchase a house outside the cemetery, which they now rented out. A TV flickered in the kitchen area, right next to two huge tombs on top of which a group of children were playing cards. I asked how they managed to get electricity into their home (some had generators). She explained that they used rolls of electrical wire to connect the power from their home outside directly into the cemetery. How they navigated the giant bundles of electrical cables and tangled wires that hang over every street in Manila was a mystery to me, but I wasn’t surprised by their resourcefulness.

The cemetery felt a lot less morbid than I was expecting, but it was still very moving. It wasn’t the dead that moved me but rather the resilience of the community that kept going in the face of such difficult circumstances.

As we reached the end of the tour, Marjorie recounted a recent meeting she’d had with an old lady in the cemetery, “There was this old lady we met. She waved to me as we passed, ‘Hello! Hello!’ she said, so we stopped and she touched my arm and asked me who these people were. I said ‘These are my guests, they have come to see the cemetery’. The old lady smiled and said goodbye and walked away, and I didn’t think anything of it. No problem. Then all of a sudden I started to feel very bad; I was so cold. My head was spinning and I felt nauseous and I just wanted to sleep. To lie down. I said to my guests, ‘I’m so sorry, I need to stop just for a moment.’ I never felt that way before; I couldn’t form a thought and felt so, so cold although it was a hot day. I think it was the old woman”. She laughed to herself as she recounted the story, but she was quite serious. “We are superstitious here. We believe certain things, and I think the woman gave me bad energy or something. The way you get a sick feeling like that? So quickly. It was her, I’m sure, and because she touched my arm, I think that’s why I got the sickness from her”.

A short while afterwards, another raucous funeral procession of scooters and people passed by. An old lady waved to us from the crowd, and I waved back. “Hello! Hello!” she called. Everyone seems really upbeat, I thought. That’s when Marjorie turned to me and said, “That’s her, that’s the old woman.” And despite the heat, a chill ran down my spine.

Originally from England, Kate Moxhay has been travelling solo for the past 20 years and currently resides in the murky madness of Manila. She is a great advocate of solo female travel and thrives in unfamiliar environments, seeking out interesting and unusual stories, experiences and people wherever she goes. Check out her latest adventures at www.katemoxhay.com.