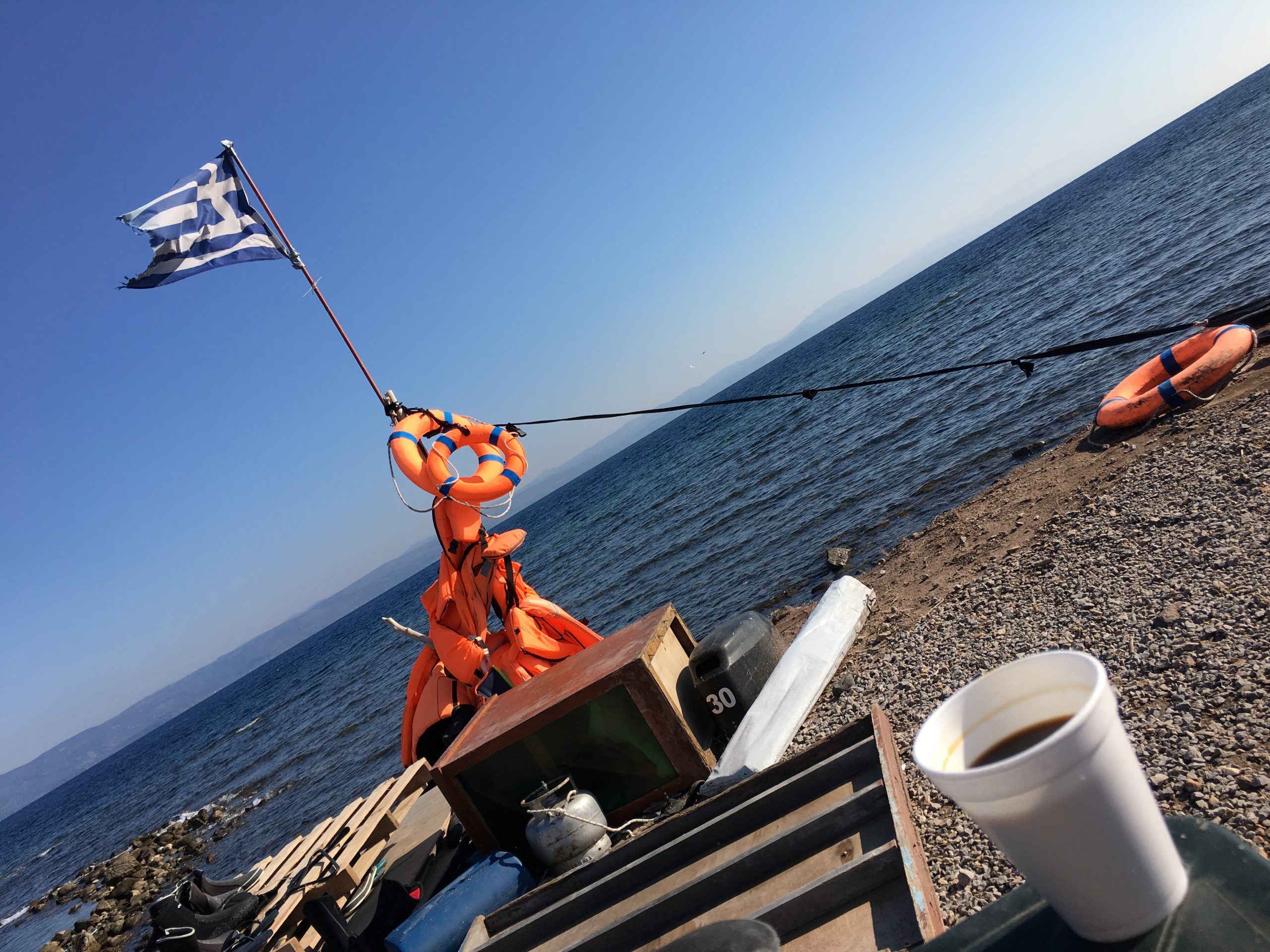 Everything is Going to be Okay…

A lifeguard works on the shores of Greece during the refugee crisis in 2016.

‘Get on your wetsuit, re,’ Svestis says back to me from the driver’s seat.
About fifty metres from the shore I see it — the little black spec amidst the clear blue sea. After three nights of staring at a dark, spotless sea, the small dinghy floats in between the crests of waves. The dinghy is three large pieces of plywood held up by an inflatable rubber balloon which wraps around fifty or so refugees inside. The dinghy sways back and forth in the wind, and buckles inwardly, uncomfortably, as it undulates across the waves.

In the passenger’s seat, Alex yanks on his wetsuit with blinding speed. The dinghy hurtles towards the shore, as do we. I quickly jam my foot into the leg hole of the suit as the car jerks violently off the road and onto the rocky beach below. Alex jumps out and hustles to the water, but my foot keeps getting caught on the neoprene of the wetsuit. My heart speeds up and blood jets through my veins and I jam my foot into the leg hole again. I still have my shirt on and my phone in my pocket and my wallet and my passport… shit, where’s my passport…

I look up and the dinghy is near. Only Alex is in the water. Svestis is out of the car too, holding some binoculars and looking for other boats. He looks back at me with a quizzical gaze.
‘Malaka, what are you waiting for?’

I leave the suit behind and rush into the sea, slipping on the uneven rocks below. The dinghy is around thirty metres from the shore now, and the brisk Mediterranean water stings like icicles against my skin. Refugees are yelling, pointing, shouting, crying, and silent. Those that stand near the edge of the boat lean precariously over its edge.

More guards join us in the water, and one yells: ‘Sekur al-Motori – Sekur al-Motori. Shut off the engine. But the boat continues unabated into the shallow water. It folds and bends over the waves at the mercy of the sea. Twenty metres. Fifteen.
Finally, one of the people in the back of the boat understands about the engine and pulls the kill line as the water laps against my stomach.

Five metres now. The raft dips and bulges like a free-form amoeba. Inside, men yell and women cry and children wail and look sickly, shivering even though the day is warm and the sun is pleasant on my skin. I grab the small rope which is attached through little loops molded on top of the inflatable portion of the dinghy and begin to pull the raft towards the shore.
Arms grab my shoulder as the rope burns my hands and rocks jab into my feet while the boat nears the shore.

‘Shwey-Shwey! Shwey-Shwey,’ I say, trying to smile. Slowly-slowly. This Arabic phrase effectively means calm down, tranquilo, everything’s going to be alright. The noise and the fear radiate from the boat and I try to breathe slowly. Shwey-Shwey, the lifeguards say, Shwey-Shwey. We say it for ourselves as much as those in the dinghy, but if people start to jump, the delicate balance of the raft may tip and —
‘Shwey-Shwey!’ The more involved male refugees start yelling to the women and children.

We pull the dinghy in with the rope. My muscles burn and the water splashes against my face and I strain with the weight — every wave causes people to lose their balance. Something catches my eye and I glance back towards the boat.

I see a face — a woman directly across from me, staring at me, angry, frightened, overwhelmed. She grasps in vain at the rope to steady herself. But I need this rope to pull the boat onto the beach. The rope is too far away from her — I’m pulling it away from her — and she grasps desperately at it with her free hand. She’s holding a toddler in one arm and tears stream silently down her face while she grasps helplessly at the rope that is too far away. She needs it but I can’t and I won’t give it to her. She thrusts her hand absurdly at it, pleading and screaming with her eyes for me to give the rope to her, to give her the one thing she can use to keep balance.

It’ll be over soon — at least this leg of the journey, but her fear-tears are contagious. I’ve never seen this expression of flight — utter, desperate fear mixed with a sort of unstable relief and a calamitous helplessness. Her disfigured face, angry and despairing and terrified and courageous, her pleading visage for the rope, her eyes, the toddler weighing heavily on her arm. Despite the mayhem and chaos, everything is silent, dimmed, as though it is just me and her, and my mind races from civil war to chemical weapons and from peaceful protests to government Authorities with dark rooms and shrouds of black nothingness under roofs of horror.

My eyes start to burn. Her toddler looks around languidly. I force myself to look away from her to focus on the task at hand. The boat is steps away from the shore.
But the woman’s face remains.
Her brown eyes, the pupils shaking back and forth ever so slightly, the whites of her screaming eyes tinged with red. Her angular jawline and sharp nose, high cheekbones, and two birthmarks just below her left eye. Her tears and her silence. Her little boy, innocent and unknowing, believing his mother when she tells him everything’s going to be okay.

Everything is going to be okay, I promise.

I shake my head back and forth to stop myself. Just next to the mother there is a teenager with a hipster haircut, a big grin on his face, and a future in his eyes, ready for the next adventure.

People are trying to jump over me and the other guards into the water.
‘Wahad-wahad!’ We yell in clumsy Arabic, pointing to the front of the boat. One by One. So the boat doesn’t capsize. The back of the boat still sways with the sea. We are ready for the final pull. I look quickly into the boat, the bottom of which is obscured by dozens of legs and bodies. Packed and stacked like poker chips in some ungodly, governmental game.

The boat jerks violently forward onto the beach. The crying mother falls down. There is shouting in Arabic. Then more Greek. People are exiting the front of the boat and it is messy and confusing and dangerous. They slide off the rubber tubes and the lifeguards catch them before they sink into the water.

The woman hands me her toddler. He is light and has a life vest tied around his neck. I look into the child’s eyes and his pupils are dilated wide — he looks directly at me, but his eyes hold no fear, no terror, no emotion at all. He is breathing normally. There are rumors of people giving their children drugs so they don’t cry on the journey. If they are too loud, the Turkish Coast Guard might catch the boat, telling them to go back, or worse. Sometimes they try to sink the boats.

I make eye contact with the mother of the child I’m holding, who is out of the boat now, frantically looking around for her son. I thought that perhaps we would have another moment — like the one before — a moment of metaphysical understanding, a glimpse of what this woman has been through, but we are far from Hollywood, from nice story arcs and character development and love stories ending in marriage.

I hand the woman her son back and she goes to sit down. There’s a man in the middle of the boat who clutches his chest, unable to walk. I shout to Alex and point. More rapid Greek. More people start walking off the boat now, and some people help the man with chest pain stumble onto the shore. Women hand me wet babies and toddlers, some crying, most silent.

I stand, helpless, as Dr. Chelsea tends to the man clutching his heart. She works quickly and purposefully until he is stable. There are girls checking their phones and speaking rapidly. Finally, the boat is empty. Other volunteers give out blankets to shivering and wet people. There are boxes full of socks and shoes and other dry clothes.

Then, another boat appears in the distance.

‘Pame! Jonah, Alex! Pame!’ Svestis yells from the car.
‘Come on, re,’ Alex says to me, wiping water from his face.
We run over to the car and I hop in the front, Alex in the back, and Svestis guns the car into gear, jerking us back onto the paved road. Alex and I keep our eyes on the boat, and I use the binoculars that Svestis brought with him. The boat of refugees — no, of people, dozens of people — bucks with the waves in its fragility above the turbulent waters below. I see so many people.

‘It looks like the coast guard will take the ship,’ Svestis says, and Alex nods.
‘What now?’ I ask.
‘Now is the time for cigarettes!’ Alex laughs, and he begins to roll one while Svestis twists and swerves to avoid the potholes in the ground.
I look out at the dinghy, which is now attached to the Coast Guard vessel, and Alex says something in English, but it doesn’t reach me.
‘Maybe they are from Sweden,’ Svestis says, their voices still distant. ‘Blue eyes, blonde hair.’
‘…They are beautiful, re, the new volunteers.’
‘What about the people on the shore?’ I ask vaguely, ‘Are they okay? Shouldn’t we help distribute the blankets and food?’ My wetsuit is still in the backseat, unused. Svestis smiles over at me in the passenger seat, ‘Malaka, our job is to make sure no one dies. We make sure no one drowns in the water, and everyone is stable. Dr. Chelsea is dealing with the hypertension patient, so now we wait again. Don’t worry, re, congrats on the first boat!’
‘My first boat…’ I repeat, frowning.

They go back to talking about the girls, and I look back towards the shimmering sea, towards the little inflatable dinghy being pulled by the modern coast guard vessel, my heart pumping quickly, my mouth silent, and my consciousness filled with a face. We didn’t even do that much.

An edited version of this story will appear in Fearless Footsteps, a collection of Intrepid Times curated travel writing published by Exisle Publishing in September 2020. Sign up below for updates.

J.D. went through a (hopefully) early midlife crisis, and thinks humans probably shouldn’t have left the trees. When he doesn’t work in humanitarian aid, he lives in Amsterdam.