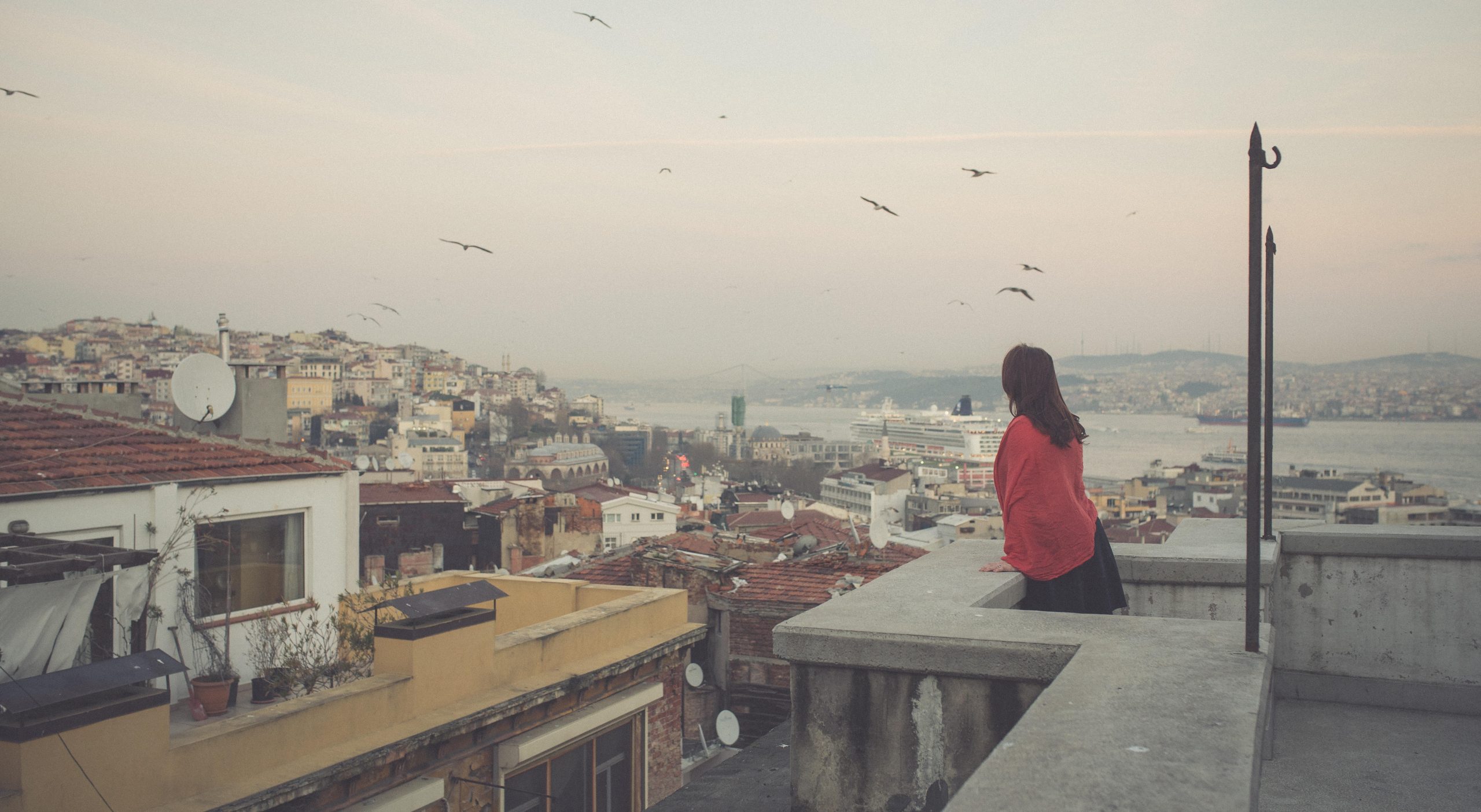 When an American living in Istanbul meets a local woman whose story echoes her own, she learns a lesson about the meaning of bravery.

The woman wrapped in evergreen invites me to her shop to talk dolma after overhearing me speak of it from the next seat on the tram. Istanbul is like that, you never know who is listening to your phone conversation about stuffed grape leaves, the kind my friend’s mother, Sevil-teyze, lets me help make when I visit. Onions, lots and lots of onions. Mixed with rice, currants, and allspice, a delicacy Sevil-teyze insists I roll and re-roll until the olive oil-slicked leaves are perfectly cigar-shaped. Perfection a must, judgement brutal. “You don’t need onions with dolma. Let me show you,” Hatice says, and I take a chance, step off the tram, and allow Hatice to lead me to her shop, tempted by more conversation on dolma.

Hatice is the Turkish equivalent of Khadijah, the name of the Prophet Mohammad’s first wife. I assume she is named after Khadijah, as I am named after St. Katherine. Khadija was a wealthy widow and entrepreneur, older than the Prophet Mohammad, a self-made woman. Independent and brave. The security guards at the posh Istanbul kindergarten I teach at call me Hatice, Turkifying my name because the “th” sound in Katherine is not easy to pronounce for Turks, and Hatice is close enough. St. Katherine was brave, too. She died, like so many saints, a martyr. An American living in Turkey for over 15 years, Istanbul is home, yet I still do not feel confident in the kitchen. Maybe I have been making dolma all wrong.

This Hatice is tall and wrapped from head to toe in a sweeping fringed scarf and jacket combo. Our kinda shared names and love of dolma inspires mutual trust. We enter her shop, a two-floored space with prayer rugs, prayer beads, rose oil, Korans, and decorative bottles holding sacred zamzam. A mecca for those shopping for goods from Mecca, after their return from Mecca. My curiosity a masquerade for bravery by following this stranger into her shop of religious goods in the back streets of the Fatih district of Istanbul.

“I didn’t feel brave, I was forced,” Hatice tells me, handing me a tiny, tulip-shaped glass of tea on a gold-rimmed saucer, along with a small plate piled high with her stuffed grape leaves. No scent of onion. She had just revealed to me that she was a divorced woman, too, before the teapot even came to a boil. But that is where the similarities between our failed marriages ends. Tells me she married young and moved in with her mother-in-law. That was what was done, in her Kurdish village in the eastern part of Turkey. Bravery was not what she felt when they were driven from their home in southeastern Turkey, during the Turkish-Kurdish conflicts of the 1990s, fleeing across the country to Istanbul, where speaking Kurdish was looked down upon and she had to learn Turkish. We commiserate over our bad accents and laud our ability to pronounce perfect “th” sounds. Hatice can say “Katherine” without an accent. She cleaned houses for a living, hiding wages from her husband and mother-in-law, preparing to flee her marriage with a child in tow.

I show her a picture of my son and tell her how I, too, knew how to hide wages, fight a mother-in-law, flee a marriage, roll dolma.

“Picking up the language here and there, just like you,” she nods. Sad that we both learned Turkish for different reasons of survival.

Bravery, however, was always there with Hatice. It was there when she prepared dolma without any seasoning during her marriage for her mother-in-law. It was there when her husband preferred the plain, slithery, rice stuffed leaves without any onion, meat, red-pepper paste, or oxtail oil mixed in. It was there when she took her mother-in-law’s blows for the last time, taking her child, money, and entrepreneurship into her own abode, a small shack on the far outskirts of Istanbul, on cheap land purchased in an area so far away from the city people called her crazy.

“Same!” she says so loud tea sloshes out of her tulip-shaped tea glass and darkens a patch of green scarf. I see my bravery then, too. In defying my mother-in-law with nonchalance. In staying in my non-native country with my child long after my divorce. In making this place home, in thriving, in being alone. Yet, I still don’t make food the way I like it, instead relying on the recipes of others. I take another bite of dolma. Was that why I had taken a chance on this stranger, this kindred spirit, while we swapped similar stories in the backstreets of Istanbul? Without onions, the flavor of the grape leaf is enhanced. I never would have thought to make dolma this way. Brine-y, tangy, my tongue runs over the texture of the leaf’s vein before meshing into the rice.

Happiness is what Hatice felt when the new airport’s runway was drawn right through her “worthless” land, and her hands were stuffed with cash. For this much-desired third Istanbul airport, the government met her demands and paid well for her land. Independence when she opened a store selling gifts for people to give upon returning from the haj, purchased in Istanbul without the hassle of lugging mementos back from Mecca. “It seemed fitting to do something virtuous with the money,” she tells me, and I nod. Another thing bravery and divorce has taught us both: immense gratitude. Vindication is what Hatice feels while negotiating quiet package deals with pilgrims before they leave on their journeys, a modern-day annual caravan. Within months, her shop expanded from a tiny corner space to this double-tiered warehouse. I sip my tea, nibble another rice-filled grape leaf, and listen in admiration. I’m learning the ropes, in my equivalent of a corner store. Still unsure, not feeling quite brave, but almost there.

Bravery started with bland dolma, and she hasn’t prepared it a different way since. Our namesakes would be proud.

Katherine Belliel is an American writer, single mom, global citizen, and cat-whisperer based in Turkey and the US. She is the co-editor of the foodoir anthology "Expat Sofra; Culinary Tales of Foreign Women in Turkey (Alfa 2019)."