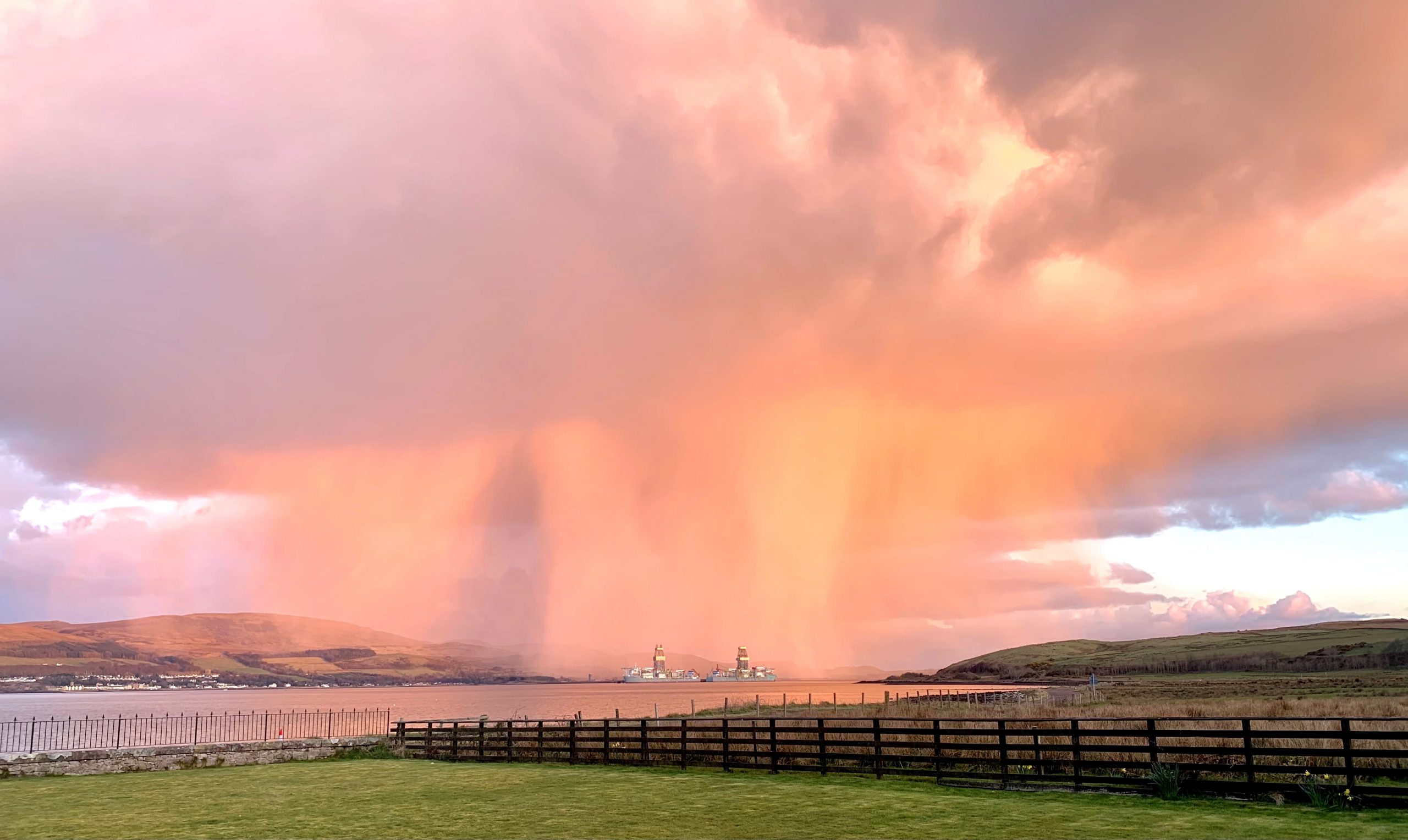 By Bethan VickersJune 1, 2021Europe, How Travel Changed Me
11 Comments

An experienced traveler returns to a childhood paradise, where she settles into memories and a renewed sense of belonging. This story forms part of our How Travel Changed Me series.

Arriving at the Isle of Cumbrae is like filling the lungs with a deep breath of air. The kind that chills and refreshes from the inside out. Maybe it’s because you arrive before you get there. It’s the glimpse of water through the old stone walls. The call of sea birds. The brisk smell of brine that says we are home. People bundle from their cars, from cramped train carriages, from their respective pilgrimages to stretch and stand in the ferry queue. And breathe.

Like a collective weight has been lifted, we watch the boats come in and maybe grab a famous irn bru ice-cream from Nardini’s or a box of fritters. The sea stretches out her fingers, reaching, as if to draw us closer – welcoming us back with the crashing and pulling of waves.

Time spent in Millport, the island’s small town, always starts with the ferry journey. Or rather time stops once on the ferry crossing – it’s a timeless place. We stand on the upper decks, children throwing scraps to the seagulls that guide us in, like thousands of families before. Watching the town of Largs grow smaller and the hills in front of us grow larger, like a thousand ferry crossings before.

One of the most enjoyable things about arriving on the island is arriving backwards. Off the back of the ferry. On to the back of the island. Driving down the coast road to the town – the only road on this side of the island. The hills towering on the right, the sea dropping away to the left. This time of year, August, the fields are lined with wildflowers. Flashes of montbretia burn through the wild thistles as we rush past. Past Lion Rock, the giant rock formation strolling down from the hills to the shore. Where the bravest are dared to climb to the top and drop over the nose, under the watchful gaze of cattle.

Past Sea-glass Cove, where things that are lost at sea return to the shore, worn smooth and new, nautical hour glasses and fine china worn to pebbles with indentations and pictures still decorating their surface. Treasure underfoot. Treasure in every corner. The wishing-well, where the whitest pebbles are offered to the heath-sìth in return for a wish. Where the tiniest pearls are rumored to be found in mussels, and water burbles secrets as it moves across the land.

O let them be left, wildness and wet; Long live the weeds and wilderness yet -Gerard Manley Hopkins

Rounding a final bend, the happy sight of multicoloured houses greets me. The Farland Hills, that hug the town, blueshift into focus. I make the last stretch of my journey by foot, slipping off my sandals and walking the long stretch of Kames Bay. My grandmother’s window a watchful landmark to guide me in. Toes pushing through sand swirled with the markings of sea-creatures, breaking the aquatic mosaic of the retreating sea.

Brine in my hair and the coastal breeze pinching my cheeks, I complete the annual ritual of my childhood, returning to the island and the sea. A tradition that stuttered and then stopped as I had travelled further afield, finally settling in China for a couple of years. The pandemic, in turning the world upside down, had led me back to familiar pastures. With my personal life bulldozed and all avenues of travel cut off, I was set adrift and given the opportunity to explore places almost forgotten.

Waves unfurl like ribbons and chase themselves onto the shore, bringing memories of countless summers. The grassy bank I learned to ride a bike on a presence at my back, a reassuring hand on my shoulder. Steadying me, bringing balance, like my father’s hand on the seat of the budgie bicycle, amber with age, handed down through 30 years of aunts and cousins and second cousins.

Millport is a town full of tradition and bicycles. Day-trippers bring their bikes over on the ferry or rent them at Mapes to cycle the circumference of the island, 10.25 miles round. Stopping at Fintry Bay or The Ritz Café for an ice-cream. The former a safe haven for cyclists mid-journey, nestled amongst trees and beaches at the back of the island. The latter, a retro 50’s diner, famous for its marshmallow ice – Italian-style vanilla topped with cold, melted marshmallow and blood-red raspberry sauce. Where, on the warmest days, you might sit in a red booth, irn bru float in hand, and watch kids jump, with utter abandon, from the pier.

The pier dates from 1833 and used to welcome the Waverly paddle steamer. It’s the mighty wooden structure we used to sneak under at low tide to balance on the encrusted beams and glimpse starfish, the colour of sunset, in its depths. A place where light and sound would bend in fantastic ways, bouncing from wave and wood. Millport is full of doorways to other worlds.

Millport is itself another world. You can sit on the island, sun on your face, and watch the rain pour out of the sky on the mainland. It has its own microclimate. One that has produced a heatwave this year, seeing days of 34 degrees Celsius. Families line the beaches and grill square sausages on BBQ’s.

The mountains of neighboring Arran in the shape of a sleeping warrior rest above us. Today he doesn’t wear his blanket of snow. It has been incredibly hot. A year for the record books. A summer to be spoken about in years to come, like the summer nights my mum recounts from her teenage years. From when the Mansewood was a hotel. The first to host an early version of karaoke with a live band. Where nightly live music rocked the bar in summer.

It was one of these nights, after an incredibly hot day, that my mother abandoned her post in the kitchen and ran barefoot to the surf. Where phosphorescent waves greeted her, to sparkle up her arms and legs – a phenomenon rarely seen this side of the globe.

A phenomenon we tried to recreate after a drunken night in a different pub, The Tavern, with its welcoming walls. Sea-facing, we watched the waves grow dark through the square windows. Each bottom of a pint glass convincing us further that the balmy conditions of all those years ago were here again, just outside the window. We could go and touch them.

Beer-sure legs chased each other to the sea. Beside the Crocodile Rock. The double exposure of then and now impressed lightly into the evening. Kicking up seafoam in delight, we discovered only moonlight in the surf and laughed anyway.

On my last day on the island, at golden hour, I come back to that first beach. To say goodbye. To float on the glass-like surface of the ocean as golden-hour shines over Wee Cumbrae. Where two days after my departure whales will come to play in the shallower waters. Here the gentle tide mirrors the slow slope of the shallows.

The first touch of the water is always painful and cold, shards of grounding sensation travel upwards from the soles of my feet. As I push further into the surf, the phantom of my grandpa cheers me on from the bay, the memory of his footprints in the shallows.

You’re not in until your shouders are under.

I give in to the feeling of slowly becoming weightless as the saltwater cradles me. Gentle rocking. Ocean-song filling ears. The hush of water as it draws over shingle, rocks, and ocean bed. The movement of currents caressing the shape of the ocean floor. The sharp of the sea pushing out the pain of the last year. The calm of the water creates a calm within, like sediment settling, clearing the mind. I settle back into myself. The distance between ancestors, places, and self obliterated by the cold.

I let memories wash through me with the freezing tide. My skin patterned by sunlight breaking through the surface of the waves. I return to my younger self, to my heritage, to the island home. If I am not able to return to my family because of the pandemic, because of time, then at least I can return to where they have been, to paths well-trod with their footprints. To pick parts of myself back up from between the shingle, like sea-glass.

We two have paddled in the stream, from morning sun till dine; but seas between us broad have roared since days of long ago. -Robert Burns

Our little island forged by volcanos, sitting in the mouth of the Clyde. Our island of infinite return, of never-left. We each leave a part of ourselves there. Amongst the heather and standing stones, balanced on a cairn. Camouflaged beside the flatfish playing in the shallows. In the micro-worlds of the rockpools. It captures you. Like the tide returning to the shore.

I leave the island the way I arrived, standing on the deck of the ferry, watching the hills retreat, like a thousand ferry crossings before. I am thick with recall, longing, and completeness. I stand beside a memory of my cousin, who reaches into her bag and slowly opens her palm – releasing its content to the wind and sea. She scatters her mother’s ashes in the place we all return to, leaning over the side of the ferry like a child waving to the birds.

Bethan T. Vickers has spent time in 70+ countries to date, with a year and half spent in China, visiting nearly every province. She has worked as a Community Project and Volunteer Coordinator for various charities in Beijing, as well as working on projects in Mozambique and eSwatini. She believes one of the best ways to experience a culture is through food and people.