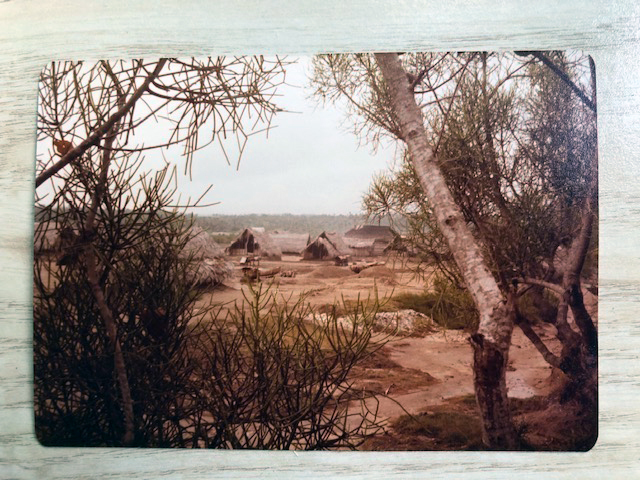 By Janet SassiSeptember 23, 2021Asia
No Comments

An exotic romance takes a strange turn when Janet Sassi finds herself banished to a remote Indonesian island where sources of protein are scarce.

In the early morning, we ferried across the Badung Strait in a hand-hollowed catamaran, seven miles to the Indonesian island of Nusa Penida. The boat was on its way back to the main island of Bali well before dinnertime without me.

Maday, my Balinese boyfriend, had banished me during my monthly because, in his culture, a woman’s flow was considered “dirty.” Caught up in the intoxication of an exotic romance, I agreed to leave Ubud, the closest place to paradise on earth, for a week. I chose the remotest place within a day’s travel in which to deposit myself.

Nobody stayed on Nusa Penida for more than a day or two, except for the natives who lived there and harvested seaweed. The island had poor crop soil, no running water, and only generator-powered electricity. My room, rented from a native family, consisted of concrete walls and correugated tin ceilings with a mattress and sheets, table and mosquito net. For a Westerner, it was the only game in town.

The pump water was barely potable, so I drank Nescafe with canned milk each morning, beer in the afternoon, and “joy” juice (mango with vodka) around a dusk fire with the only other Westerner nearby, an Aussie drifter named Greg.

My banishment made the days seem long. In the morning I ate melon and pan-toasted, bread with Vegemite, then walked dusty trails in search of the best coves in which to skinny dip unnoticed. In the alcohol-induced haze of mid-day, I got massaged with sweet oil by the local girls.

Dinner with the family was rice with local root vegetables, and bits of dried shrimp. Nasi Goreng and jajung was nice, but by the third day, my ribs were beginning to show.

He laughed. “I boat back and forth once a week and load up on jerky. Even so, I’ve lost eight pounds since I came. There’s nothing to eat here; that’s why nobody stays—except for me. And now you.”

Noisy hunger pangs set in late on the fourth night. Tossing fitfully in the dawn, awoken by my grinding stomach, I visualized the fat dissolving off my bones until I was barely a skeleton in a bikini. Sure, there was something invigorating about weight loss, but my body’s message was clear—it craved protein.

On the fifth day I hiked long into Sampalan to look for something to eat. Fish. Fowl. Anything living. When I came upon the small village of thatched huts, a posse of grinning children in dirty Western clothing greeted me.

“Wang, wang,” they cried with big, baffling smiles. How could people with nothing be so happy? The little ones held out their hands. An older girl stroked my blond hair.

She led me to a nearby hut where a teenage boy stirred a large pot in the center of the room over a fire. His mother made it was clear she was happy to feed me. We sat at a small table in the corner of the one-room hut. She put a plate in front of me, and I dismally registered the bland starchy tubers and lump of dried fish. Yet, I smiled politely. Suddenly, the woman brought out a boiled egg, chopped it up, and sprinkled it among the three plates. Even though it was a single egg, I salivated.

Following the meal, Mother took my hand and put it on her son’s. He couldn’t have been more than 17.

Although the son still smiled, a glint faded from the mother’s eye. I took out a rupee coin and pressed it into her hand, thanking her.

“Where did you get the egg?” I asked.

I walked a half mile to a hut that had a branch fence around the back. A barnyard smell hit me, and I smacked my lips. A few chickens clucked inside the makeshift pen. Sitting on a carton was an ancient man in a sarong, pounding kernels of dry corn with a stone. He sprouted a toothless grin.

I asked if he’d sell me a few eggs.

I gulped a pool of saliva and pointed to a chicken. I made a throat slit motion with my hand. “How much?”

The man looked over his flock and shook his head. “No chicken, no eggs.”

The next night with Greg, my sixth night on tubers, I got drunk on just one drink. The fried potatoes, onions, seaweed, rice, and dried krill hadn’t filled me. I cursed my banishment by my exotic lover, wishing I wasn’t stuck here for another two nights. As my body shed itself of nutrients (menstrual blood, stored fat), little mattered but staving the gnawing, hollow feeling in my gut and the headache that wouldn’t quit.

In the morning Greg showed up early with three eggs. My family’s matriarch smiled and offered to cook up a big omelette for us with potatoes and onions.

As we shared the breakfast at the serving table in the pension’s yard, two village children watched our every bite. Greg cut a section of the omelette and laid it on top of a piece of Vegimite-coated toast. “Try it with bread,” she said. “It will go further. It’s the first seasoned thing I’ve eaten in a week; look—pepper, cayenne, seaweed, salt, and who knows what!”

I eyed the tiny reddish herbs clustered in the middle of our omelette. They weren’t herbs. It was a mass of red ants. Cooked into the egg.

I watched as he shoveled the food happily unawares into his mouth.

Then, I stared down at the piece on my own fork. Yep.

“This beats jerky, right?” Greg shrugged, swilling a morning beer. “It sure does.” I lifted the piece to my mouth and began to chew.

Janet Sassi is an author and editor based in New York City. She blogs at www.everlastingmisfortune.com.