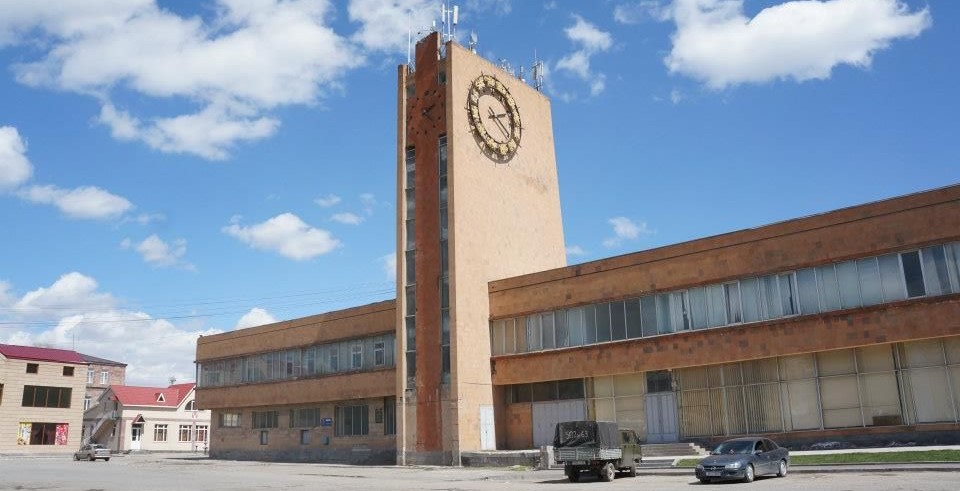 By Kris MoleFebruary 16, 2022Asia
No Comments

A journey through Gyumri reveals the city’s Soviet-era tendencies as two travelers seek out public transport to Armenia’s capital. This is a follow-up article to Soldiers, Gangsters, and Prostitutes: A Night out in Armenia

“If you want to shower today – and trust me, you need to shower – you have a window of about fifteen minutes before the water is turned off for the day,” Adriana, my travel companion, informs me as she gently shakes my face to annoy me enough that I get up.

Yesterday’s diarrhea is a thing of the past, but still my body feels weak and achy. The past few days of cross-border hitchhiking, drinking, and staggering around under the heavy Caucasian rain has taken its toll.

I take a lukewarm, low-pressure shower, and then boil some water from my bottle, make some tea, and lean out the kitchen window to smoke. Our fourth-floor window offers a panoramic view of about 180 degrees, revealing that we are sat in a valley, encircled by green-brown mountains, their snow-capped peaks mingling with fluffy marshmallow clouds.

Our street is little more than a dirt path, with small ponds dotted all over it, filled with the previous few days’ rainwater. A broken and gutted school bus sits at the side of the road. I know we are in a city, the second largest in the country, and as soon as we turn the corner we will return to urbanity, but for the moment the environment feels rural.

Sure enough, as we turn the bend and leave our block of flats behind us, the city opens up ahead. Wide, dusty boulevards, lined by taxis; every single vehicle on the road a 1970s Russian Lada; every single car’s windows tinted black. The roads look as though they have endured a bombing campaign from the air. Iustina, a Romanian completing a volunteer placement in Gyumri, explains that the roads have remained like this for the 25 years since the devastating earthquake of 1988, which all but destroyed the city, then known not as Gyumri but as Leninakan.

“It will still look like this in another 25 years,” Iustina tells me, solemnly. “All the money that comes into this country goes to the capital, Yerevan. None comes here.”

We stop off in Ponchik-Monchik, a donut restaurant that attracts sweet-toothed pilgrims from all over Armenia. For a few pennies, they serve you a huge, deep-fried puff of sweet batter filled with either thick vanilla cream (if you order a ponchik), or gooey chocolate cream (if you order a monchik), sprinkled with a generous helping of icing sugar. I eat two ponchiks and two monchiks, and wash them down with a bottle of Armenian lemonade, which is different to lemonade from any other part of the world, in as much as it contains no lemons. It is actually made from pears and is brown in color.

It tastes like the pear drops my nan always used to carry in her handbag, and comes with a weirdly bitter aftertaste, as though you have just sucked on a penny that has been left to soak overnight in a bucket of kitchen work surface cleaner. It also rots your guts. The noises my stomach is making an hour after drinking are new to me.

Adriana and I split from our hosts and set off to explore the city. Gyumri by day, under the warm April sun, is a totally different world to the one we entered at dusk last night. The most noticeable difference is the abundance of women strolling around, shopping, chatting, smiling, linking arms with one another. Watching them go about their business, you would not guess they were subject to draconian unwritten rules that keep them locked up in the house from 7 in the evening until sunrise the following morning, making them virtual property of their husbands or fathers.

Armenian women are beautiful: black hair, olive skin, large brown eyes. They dress in black, just like the men of the city. Gyumri’s men have a preoccupation, and it isn’t women. Those grab machines you see in amusement arcades, on sea-front promenades and on piers – the one where you put a coin in and then with the joystick try to maneuver the metal grabber to liberate a cuddly toy – are everywhere in Gyumri; you can’t walk ten paces without bumping into one. Armenian men are not trying to win teddy bears, though; they are going for cigarettes.

A pack from a shop in Armenia will set you back 450 dram (just under a US dollar). The Armenian man will, through practice, get almost every packet of fags he desires for 100 dram (about 20 cents); the amount it costs for a go at the grabber. I spend a lot of time watching the local menfolk play these machines and rarely see a failed attempt.

It looks so easy, it makes me wonder why tobacco shops even exist in the city. Until I have a go myself. Actually I have a few goes. I end up spending more on the machine than I would have for a packet of cigarettes from a shop… in England! And I still don’t have any smokes. Tobacco shops in Gyumri exist to serve the foreign visitor.

We pass through the pedestrianized Rizhkov Street, where street vendors sell fridge magnets, keyrings, and other expensive tack to foreign visitors; mobile phone companies use pretty girls to sign locals up to contracts; street performers dressed as robots dance to Beyoncé hits belting out of a boombox; and cheerful ladies with painted faces sell balloons to children; until we reach Gyumri’s market.

Being the only strangers in the place, we are afforded special attention. Every vendor greets us with a smile and asks where we are from before, without fail, offering us a free sample of whatever they are selling. Dried fruits; nuts; dates and figs; pungent and stringy cheeses; airy breads; flat breads; and pastegh, a kind of jerky made from sour fruit purée and then dried, that looks like a pigs’ tongue.

You can watch your lavash – a soft, thin flatbread that is the staple of Armenia – being made for you before you buy. The dough is rolled out flat and then slapped against the hot walls of a clay oven.

By the end of the afternoon we feel we have done the city justice and are ready to move out the following day for the capital, Yerevan.

After speaking to a few locals and non-locals alike about the transportation options, we decide that for a change we will take public transport rather than hitchhike. There are a few reasons for this. Not many lorries drive the route between Gyumri and Yerevan, so traffic flow will be limited. Public transport prices are next to nothing. The state of the country’s roads will make any ride in the back of a car severely uncomfortable.

We have two options; either we take a Marshrutka (a shared minibus), or we take the train. The Marshrutkas run frequently, don’t cost much, but have one thing going against them: they are always crammed full of people, like a tin of sardines. Also – and this is the deal breaker as far as Adriana is concerned – women are not allowed to sit in the front seats. So we make our way along dusty, wide, potholed streets to the railway station to check train options.

Inside the old Soviet-era station hall, I approach the stern-faced woman behind the window of the ticket office. All information in the station is written in Armenian and also Russian Cyrillic; nothing in English nor the Latin alphabet. The woman only speaks these two languages. I switch to my Slavic hybrid and get her to explain that the train for Yerevan leaves every evening at 6 and costs just 1000 dram (two packets of cigarettes), for a three-and-a-half-hour journey. I attempt to purchase the tickets but am told that she will only sell them shortly before the train departs.

Seeing as how we aren’t going to be experiencing a long and uncomfortable journey in a Marshrutka to Yerevan, we decide to take a short – but no less uncomfortable – ride in one, from the train station back to the flat. With one side of my face stuck to the inside of a window, and the other side neatly tucked under the sweaty armpit of the tall, stocky man next to me, I can’t help feeling we have made the right decision with regards to the train.

We jump off the Marshrutka close to the flat, and I spit out the clump of armpit hair that has built up in my mouth over the previous twenty minutes. As we cross the bridge that takes us into our neighborhood, I use a few moments to take in the scene. It is amazing how many different areas there are to such a small city. The architecture changes drastically from one street to the next. There are areas of grandiosity, of wide boulevards and large buildings; areas of brutalist architecture, the old Soviet blocks; parts of the city center that are picturesque; and then, below the bridge that we stand on lies a shanty town, a proper slum. But even that has an air of beauty to it, thanks to the snow-peaked mountains that watch over it protectively.

We spend the next day walking around and eating. There are no McDonald’s restaurants in Armenia, but there is something that looks very much like a McDonald’s, right down to the huge golden M. I make sure to try the offerings of MsBurger. The fries are pretty good.

Stomachs full, we make our way to the station, where this time the lady behind the window allows us to buy tickets. Our train comes in, a rackety old thing with wooden benches for seats, and quickly fills up, with a mixture of gold-toothed peasants talking loudly amongst themselves, and young families with obedient children. An old lady makes her way through the carriage selling seeds served in paper, that to the untrained eye look like a traditional portion of chips from the chippy; and packets of sweet puffed wheat. I buy a pack of the latter. It is like eating a sugary breakfast cereal without milk.

We have been trundling along for an hour and a half, and I am just dropping off to sleep when I am interrupted by a commotion going on behind me. There is screaming, shouting, and more worryingly, someone slapping the back of my head and pulling my hair. I turn around to see the lady behind me – one of the gold-toothed brigade – forcing a live cockerel back into the plastic shopping bag that she has been keeping him imprisoned in. She puts her hand up to acknowledge me and laughs as she apologizes. The live bird decided to attempt a break for freedom, and in the confusion attacked the back of my head. Nothing to see here.

“Budge up, will you?” I say to Adriana, “I think I’ll come and sit over on that side with you.”

The journey from Armenia’s second city to her capital is scenic, if you enjoy mile after mile of steppe and dry mountains. And let’s face it; who doesn’t?

Kris Mole’s first book Gatecrashing Europe, recounts the juvenile challenge he undertook to visit every capital city in the European Union, without spending a cent, and all the weird and wonderful characters encountered along the way. He is currently serializing his second book, a humorous childhood memoir of growing up with alcoholic parents, at krismole.substack.com.