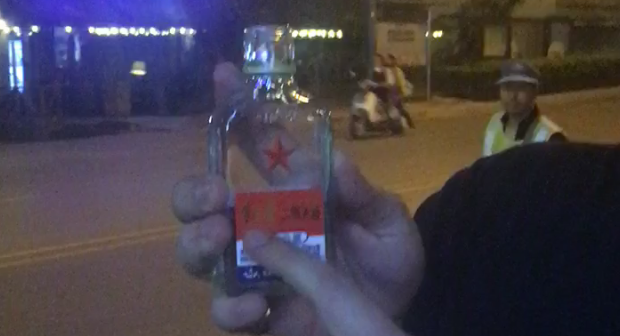 My friend paused, holding the small bottle in his hand. It was dark, and for a moment the streets of Kunming seemed to grow silent. The cars stopped honking. The motors of the scooters went quiet. Even the drunken carousers stumbling out of the nearby university held their tongues. Something epic was about to happen.

Tom was about to take his first sip of Ergoutou, a cheap and prolific brand of Chinese grain alcohol. Five yuan – less than one dollar – gets you a fist sized bottle of the 56% proof spirit. He unscrewed the lid, and took a sniff of the pungent liquor. His nose wrinkled, he almost gagged, his face turned pale.

The German and I, both China veterans who had been through the ringer with this revolting spirit, egged him on mercilessly. Bravely, foolishly, he took a swig. He convulsed. His eyes screwed shut. His face went from white to red. Somehow, he got the spirit down. Opening his eyes and staring at us with unveiled disgust, he passed the bottle to me.

Now this was by no means my first Baijiu experience. It had been a while, but I knew what I was getting into. Or so I thought. However, the moment the clear liquid hit the back of my throat I gagged, spitting most of the shot out into a nearby bush.

Before you judge my lack of fortitude, let me paint you, you lucky Baijiu virgin, a picture.

Remember the worst shot you have ever taken, that foolish 3am tequila your drunk friend forced on you, that horrific unlabelled vodka served from a 3 gallon jug in a South East Asian party town. Now imagine that this shot decided to take a walk home one day, after a busy afternoon of shot related work. (Yeah yeah shots can’t walk. It’s a metaphor. Anyway…)

So our shot is walking home, when he trips and stumbles into a gutter. Drunks come by and unknowingly urinate on our poor shot, but he’s too weak and ashamed to move. Hours, perhaps days later, he crawls out of the gutter, and takes shelter in what he thinks is a safe, cozy hiding place.

But then the garbage men come, and dump the shot into a reeking truck filled with organic waste. Rotten fruit, fermented vegetable scraps, maybe some meat that has gone bad. The shot stews in this nauseating cocktail of filth before somehow escaping and making its way back to the bar, its home.

There it is consumed by a rough alcoholic vagabond with tattoos on his knuckles, a ponytail, and bloodshot eyes. The shot is trapped for a while in the scarred liver, cycles through the intestines, and is eventually ejected into a urinal that hasn’t been cleaned since the Reagan administration.

Finally, the shot ventures through the sewage system, which – due to budget cuts and political backhanding – distributes it to China. It is quickly bottled, and sold to the working class, farmers, students and, occasionally, foolish foreigners.

Even this picture can barely depict the utter revulsion that this spirit inspires. Drink more than a glass or two and your skin reeks for the next day. It may just be the worst thing on the planet. So, naturally, we insisted that my friend should experience it on his first trip to China.

Somehow we made it through the bottle. We then found ourselves at classic Chinese bar, drinking surprisingly palatable martinis, and attempting to play the dice game which is a ubiquitous feature of nights out in the Middle Kingdom. A yellow Lamborghini was parked outside. Immaculately dressed girls stared at their phones, as their boyfriends doggedly devoured watery beer after watery beer.

Such is alcohol’s effect on the memory that we may have even purchased a second bottle of Baijiu later in the night, and polished it off on a street corner. I’m not sure. All I know is that I’m never drinking that stuff again. I hope…