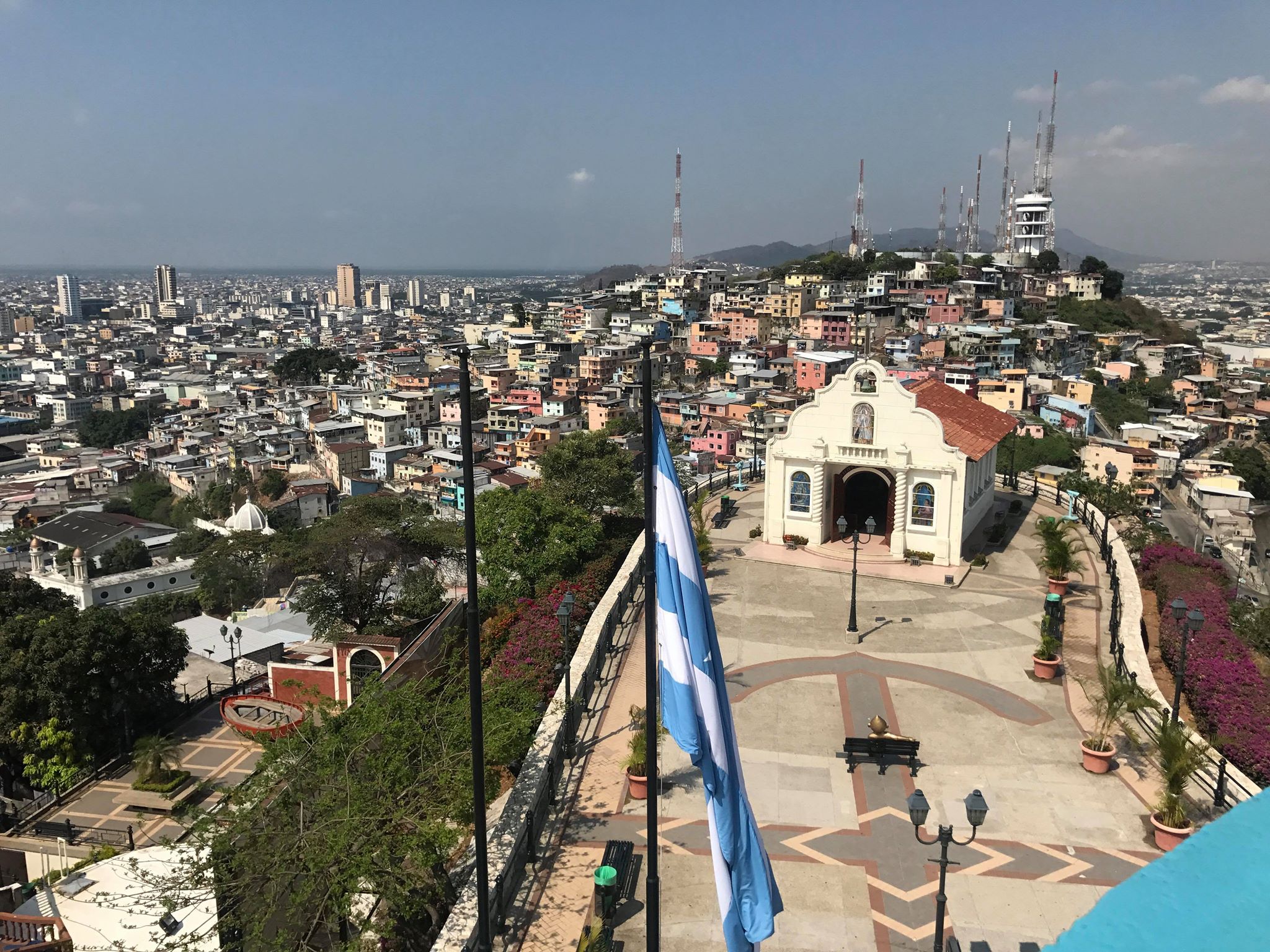 Fear and Perspective in Guayaquil, Ecuador

When a 21 year old female solo traveler finds herself in Ecuador’s most infamous city, even a short walk to the bank feels like Mission Impossible.

“¿Hablas Español?” The taxi driver asked lazily as he loaded my pack into the boot. I don’t think he really cared whether yo hablo español or not, he just wanted my cab fare. After my long journey from Havana to the Ecuadorian city of Guayaquil via Bogota, I wasn’t up for a broken conversation any more than he was. I was just craving a flat surface to sprawl on.
“Sólo un poquito,” I replied, shuffling into the back seat. That was the end of our conversation.

When describing cities, there are certain tropes used by writers to capture their “bustling” vibe and “soulful” lights. But the streets of Guayaquil were different. Eerie. Once we’d exited the freeway, we passed one single car in the space of thirty minutes. It was probably for the best though, as my driver sped happily through red traffic lights as if they were green. On the third occasion, I started to think he might be colour blind.

Not a single person walked the Malecón 2000 like they did in my guide book. There were no laughing couples at restaurants, nor people spilling onto the street from a bar dancing like I’d seen numerous times in Havana. Nothing. Just emptiness. I was relieved when we finally pulled up at my hotel, but the weight of my unease made it hard to get out of the car. I passed some bills to the taxista and clamored inside as quickly as possible. The receptionist smiled and it was a welcome contrast. He handed me my key and a few bits of paper I stuffed in my bag without much thought. Moments later, I was ushered upstairs to an enormous room and left to stew in my own discomfort.

“For a pleasant stay, please consider the following recommendations…” Started the card left on my pillow by the hotel, but I was too tired to read further. I showered and, feeling refreshed, settled back on my pillow. It was time to plan my free day.  Back in Australia, I had dutifully researched Guayaquil. While I collated a list of sights to see, I was also alerted to a few safety risks. But as with all travel warnings, I took them with a side of skepticism. After all, it’s the government’s job to be overcautious! Nothing I had read at home had given me the slightest inkling of danger.

Relaxing on the bed, I lazily turned my eyes back to the card on my pillow. The more I read, the more alarmed I began to feel. It continued: “Use only Hotel’s taxi services. Do not take taxis on the street. If you are at a different place, please call us to arrange your pick up. We suggest not to use your mobile phone in public areas. Avoid carrying or wearing jewelry. Carry only the amount of cash you need for one day. Take only one card with you and leave the rest in the hotel safe. Be suspicious of strangers who claim to know you, pretend to be friendly or offer cheap transportation.” The list went on and on and the all-too-familiar unease came crashing back as if someone had dumped a bucket of water over my head. 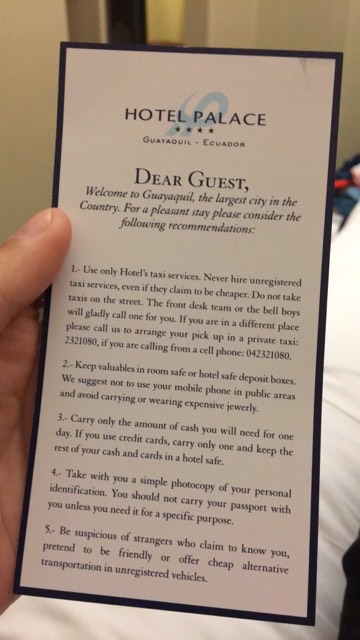 In a desperate attempt to rationalise my fear, I jumped onto Google and plugged in ‘is Guayaquil safe?’ The internet laughed at me. Dozens of websites featured articles warning travellers of its status as the largest and indeed most dangerous and violent city in Ecuador. Others adopted a more level tone, stating simply that it is not considered a safe place. I trawled through forums where tourists spoke of being stolen from, mugged at gunpoint and even kidnapped! They each pleaded to other travellers not to traverse the city alone, especially if they were female.

Several hours later, I tore my bleary eyes off my phone screen and analysed my room in a state of panic. I’m safe here, I thought to myself, but triple checked the door lock and sealed the windows anyway. Sleep did not come easily to me that night.

Three hours. That’s how much time it took me to psych myself up and leave the room. Forget breakfast, I was lucky to make it downstairs to eat in the hotel restaurant without having a full-blown panic attack. But I had a more important task at hand: retrieving money from an ATM. I walked up to the reception desk again and was greeted by a man with an even larger smile than his colleague of the night before. But in the light of day, with my knew-found knowledge, the sight was more unnerving than comforting. I felt like I was in a Jason Bourne movie and everyone around me was plotting my demise.

“Excuse me, señor.” He looked up, “Can you tell me where the nearest ATM is?”  “¿Cajero automático?” he asked and I nodded, “just across the street.” He pointed to a small booth next to an empty shop-front. Most of my brain rationalised that it was safe in plain sight, but my amygdala kept screaming that it was exposed and I’d be ripe for the kidnapping. Every step closer to the exit required deep breaths and concentration. Just as I was about to step into the revolving door, a voice called out to me. I swung around to meet the eyes of the receptionist again.

“Tenga cuidado, señorita. La ciudad no es segura.” Be careful miss, the city is not safe. I wished I hadn’t understood this ominous statement.

“So, have you seen much of the city yet?” I asked the blonde girl from my tour group. She nodded emphatically. Our group had just met, and we’d decided to go out for dinner and drinks together. It was to be my first time leaving the hotel since my panic-stricken dash to the ATM that morning. Stepping out of the door was still unnerving, but far less so with five other people around me.

“I went out early this morning to explore. Managed to walk most of the Malecón, visit the Iguana park and walk up Santa Ana hill,” my new friend said, “I love this place! What about you?”

I shook my head, eyes lowered in embarrassment. Or was it concern? I couldn’t decide which one of us was crazy… the frightened girl who’d stayed locked in her hotel room, or the one who’d casually strolled around Guayaquil on her own, with no thought of fear or danger.

“Uh…” I started, choosing my words carefully, “not really. I had a lot of washing to do and wasn’t sure how safe the city was, so I mostly stayed in my hotel room.”

“Wait, the city isn’t safe? Huh. I had no idea,” she laughed and by the time we reached the esplanade, her fleeting concern had vanished. There I was, working myself into a panic at the idea of crossing the road and meanwhile, she’d been exploring the city with a smile on her face.

With new friends around me, the city started to feel less eerie. The strangers were no longer homicidal kidnappers waiting for their chance to attack. I began to relax, and finally started to notice the beauty of the place. Yes, perspective really is everything.

Emma Calley is a travel and food writer from Melbourne, Australia. With one grandma who loved to write and another who loved to travel, the profession was a natural progression and one that has nurtured her passion for language and culture. When she’s not exploring, Emma spends most of her time studying Spanish and dreaming of the day she can hold a full conversation without the aid of a foreign dictionary.