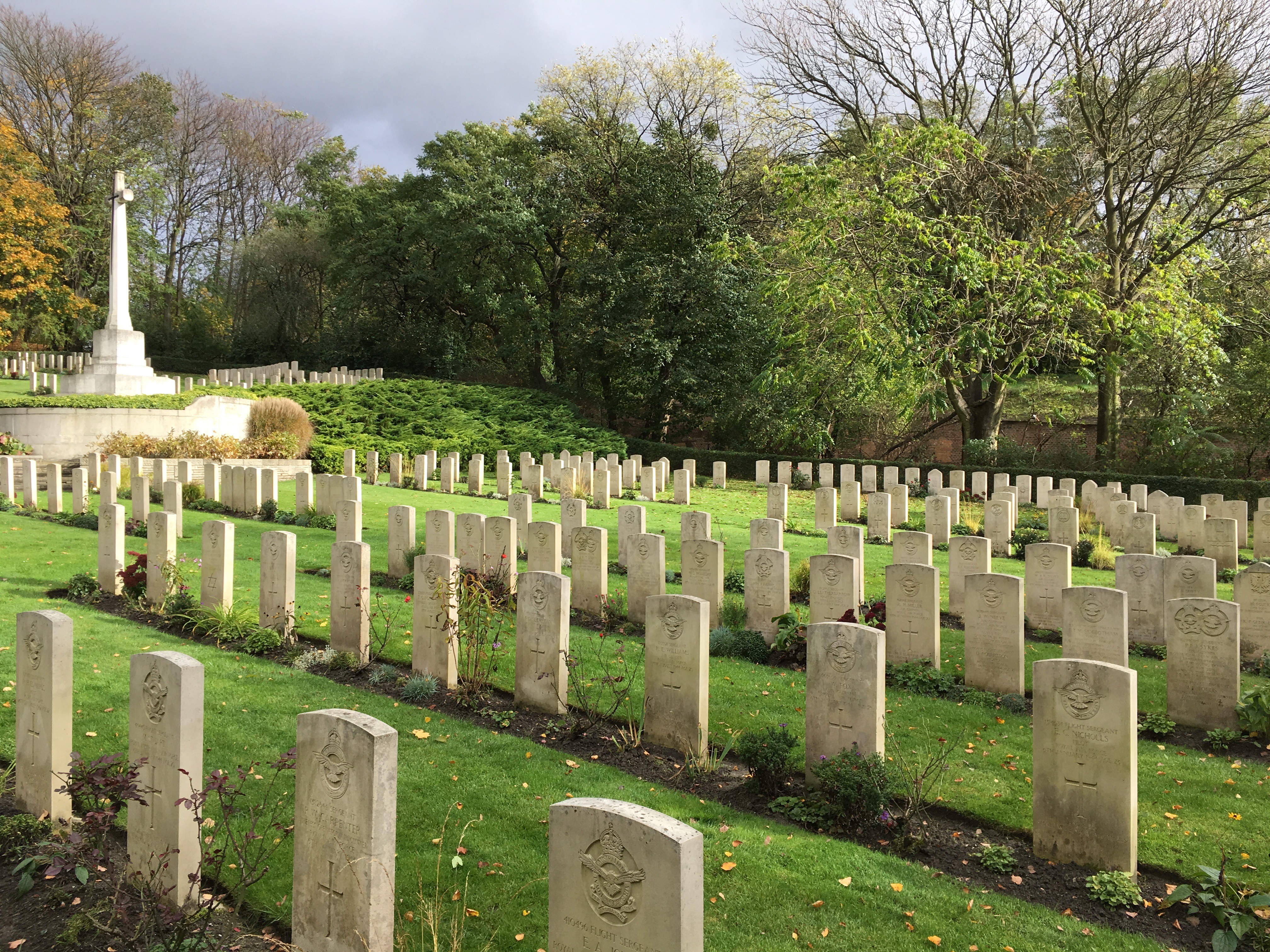 Some Corner of a Foreign Field

It feels like the island weather of home. The wind blows and grey clouds part to reveal blue sky. Yet it’s still cold. With my headphones on I walk through Citadela park, 250 acres of bush, grass and history in the middle of Poznan, Poland.

The city lies on the road from Moscow to Berlin, so it was always going to see bloodshed. This park was the scene of a horrific battle between Russia and Germany towards the end of the WWII in Europe. Here the Nazi soldiers made their final stand during the Battle of Poznan, before being captured by Soviets in February 1945. Hundreds of Russian soldiers are buried here, their tombs adorned with the Hammer and Sickle.

Old tanks and snub-nosed jets lie rusting behind a wire fence. Children gawp at them as the couples out walking their dogs briefly turn their heads before resuming their arm in arm stroll. The park also contains art installations which attempt to reconcile the tragic history – a field of twisted copper statues depict humanoid figures in expressions of torment.

With such a weight of history, you’d expect Citadela Park to feel erie. It is, after all, a battleground. A cemetery. A museum of rusted military equipment. But to the locals it is, first and foremost, a park. A pond lies in the middle, surrounded by brick seats. In the summer concerts are featured at an ancient Romanesque amphitheater, hidden off to the side.

My home in Poznan was just a five minute walk from the park. As autumn turned to winter and the leaves fell from the orange trees, I walked here most days, lost in music and thoughts. Things were changing in my life, and I sought comfort in the solitude.

What keeps me coming back is a small cemetery, hidden down a hill, tucked away from the main park. As I was to learn, on my many wanderings I had not been – as I had always assumed – the only New Zealander in Citadela Park.

Poznan Old Garrison Cemetery, originally Schneidemuhl Prisoners of War Cemetery, lies down a concrete staircase from the main main field. Shaded by trees, you walk past the harsh, granite Soviet tombstones before a smaller green field appears out in the open. Up a short staircase you find the Commonwealth grave, where the British, Australian, and even Jamaican soldiers, who fought or died in this part of the world are remembered.

Among them are five New Zealanders. I paused when I noticed the silver fern. On subsequent wanderings I returned many times, and came to know their names . They became silent companions from a distant home.

Their names were etched into headstones:

I came to learn that these New Zealanders had not died in Poznan, but as prisoners of war 200 kilometers away, in the city of Zagan. The events of their and their fellow prisoners deaths were the inspiration for the 1963 movie starring Steve McQueen: The Great Escape.

As far as I could tell, at least three out of the five New Zealanders buried in Poznan died during one of the most legendary episodes of the Second World War.

In the days leading up to March 24, 1944, over 600 prisoners of war at the German camp, Stalag Luft III, were involved in a bold and audacious plan. Under the covert leadership of charismatic British captain Roger Bushell, three tunnels were dug, which the prisoners named Tom, Dick and Harry. This would be their escape.

Short of resources, the prisoners used tins of hot chocolate as shovels and to craft ventilation pipes. For candles, they collected the fat that formed at the top of the greasy soups served to them by their captors. The guards were suspicious, and extreme levels of stealth were called for. Prisoners would walk across the yard, scattering the earth collected by their diggings efforts.

When the day of the escape finally came, the prisoners were plagued by bad luck. Part of the tunnel collapsed. The trap door at the end had frozen shut. Snow on the ground would reveal the footprints of those who escaped. The first 76 men crawled to freedom, but the 77th was spotted. New Zealander Henry Trent VC stood and surrendered. Of the 76 who escaped, 73 we recaptured. 50 of whom were then executed, under the orders of Adolf Hitler himself.

Many of those executed after the escape would be later buried in Poznan. Far from anonymous soldiers, I was to learn that several of the Kiwi dead had well-known stories, and were to this day remembered and honoured by family back home.

Perhaps the most famous among those buried in Poznan is Porokoru Patapu Pohe, known as John to his friends. In 1941 Pohe, a farm boy with six sisters from just north of Taihape, became the first Maori pilot in the Royal New Zealand Air Force. In 1943 his plane was shot down by anti-aircraft guns while flying over the English Channel. After floating for two days in a dinghy, he was ‘rescued’ by the Nazis, who transported him to Stalag Luft II. He was 29 when Hitler ordered him shot at the end of March 1944.

Arnold George Christensen, a former Hastings boy scout and later journalist with the Hawkes Bay Daily Mail, was executed alongside Pohe on March 29. He was just 21. Less is known of George William Neville (30), Kenneth Lyettleton (38) and Charles Stewart Lovett (45) who are buried by their sides, the silver fern adorning their headstone.

Charles Stewart Lovett’s birthday is unknown. It is noted by the Auckland Museum that he died while a prisoner of war on 12 February 1945, almost a year after the execution of the ‘Great Escape’ captives. George William Neville died in January 1944, so would not have lived to see the escape that occurred two months later in March. Kenneth Lyttleton Pratt died in September ‘44, six months after Pohe and Christensen.

A Window to History

As I walked away from the cemetery, slipped back on my headphones, and began the weary climb past the buried Soviet soldiers and back up the stone steps, I was felt as if I were in two places. My mind was with 21 year-old Christensen in his last moments. Were he and Pohe friends? Did the Nazi guard’s hand shake as he fired the shot? Did the other Kiwis watch on in horror, or were they locked up far away? Had they known Lovett, before he died in January?

It felt right to have learned something of their story. Now when I visit the graves, theirs are not just names in stone.