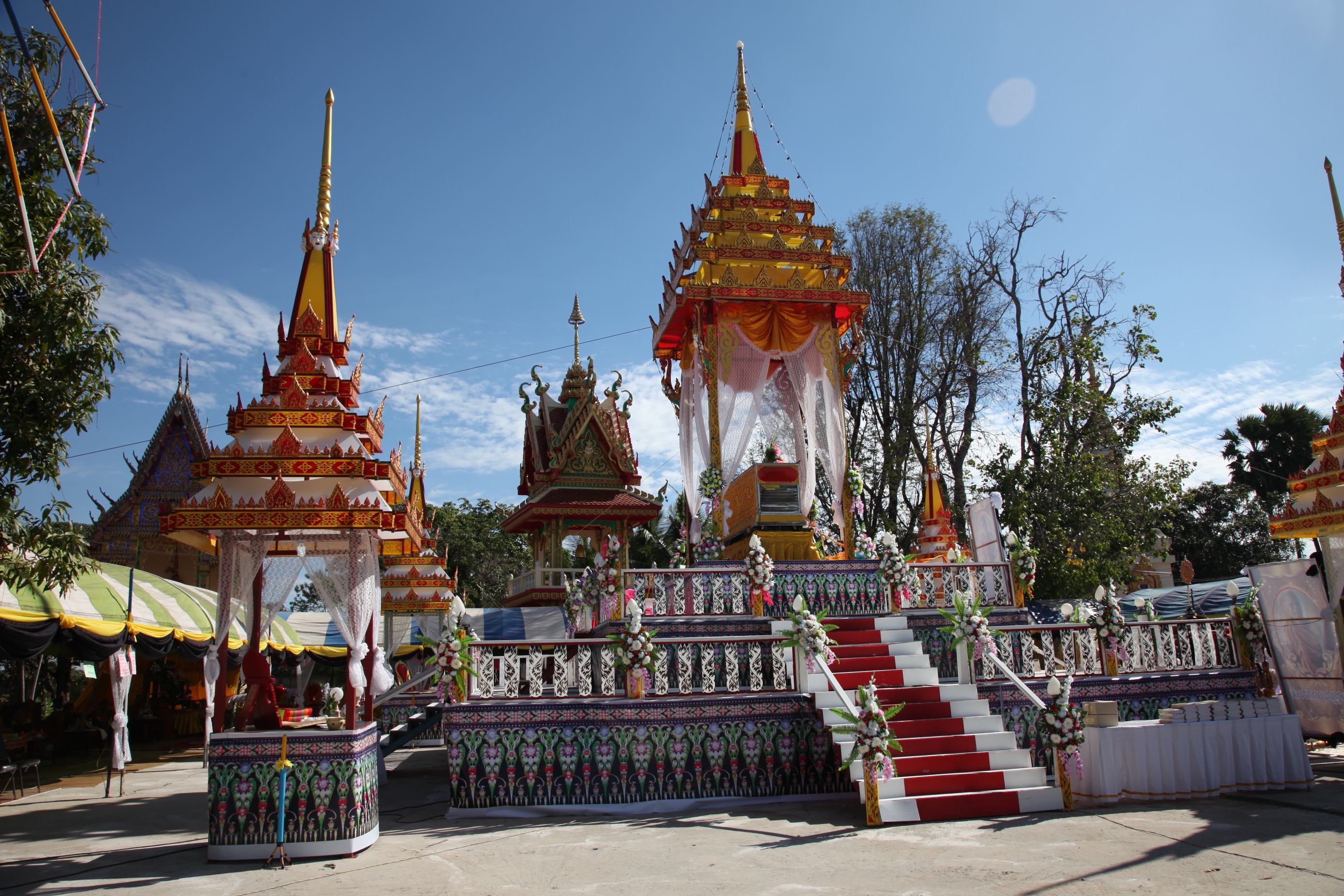 At the Funeral of a Thai Monk

Owned and run by native Mon People, the River Kwai Floating Hotel bobs on the water’s surface, surrounded by thick jungle and mountainous terrain. In the evening, a varied and seemingly unlimited feast was served, before our hosts performed traditional Mon music and dance by torchlight (there was no electricity).

The journey back to Bangkok was long and I was reluctant to leave such luxury, but there was much to be seen: The Grand Palace complex, Jim Thompson House, and of course the markets. But after a week of frenetic sightseeing, I finally had to accept that I wasn’t going to see half of what I had planned to. The country is just too vast, too packed with sights, sounds and experiences. I needed help. It was time to call Thun.

Thun is a Thai man whom one of my friends had befriended during a year in Bangkok. They’d become close, and he had kindly offered to be my guide.

So we met for lunch at a restaurant terrace in Sukhumvit. Standing well over six feet tall with a very slender frame, he moved silkily, with a graceful gait. His manner, though calm, reserved, and reflective, could not conceal a tender and sympathetic nature. We chatted, and I quizzed him about the best islands to visit. He offered plenty of recommendations, and at the end of the meal he invited me to visit his family with him in the coming days.

He told me that he was heading home to attend the funeral of the monk who had educated him as a child. “If you want to get off the tourist trail, why don’t you come with me?”

Though I was worried that I might be intruding, he reassured me with confidence that I was more than welcome, and that it would be a spectacular and unique occasion. After a brief hesitation and a few probing questions (would I need a suit?! – thankfully not) I agreed.

Two days later, we met at the airport for our flight to the northern province of Roi Et.

After a full week in the bustling city of Bangkok, the countryside offered a welcome change of pace. One of Thun’s uncles collected us from the airport, and after a trip into town to grab gifts and supplies, we were on our way to his mother’s village. We left the highway behind, then the roads disappeared altogether as we snaked our way through the last few miles of dirt track.

The village sat at the centre of rice fields and was composed of no more than a few dozen little homes, dotted around. The houses were a mixture of traditional wooden structures built on stilts and some other more makeshift looking constructs using corrugated steel, like the one I would be staying in.

As we arrived at his mother’s home, where his extended family had assembled, the anxiety that I might be intruding on a private affair returned, and I felt my remoteness for the first time. As a tourist on holiday, was it really appropriate for me to have accepted an invitation to a funeral?

For the rest of the day, we ate, and ate, and ate a little more! I was introduced to grapefruit salad, as well as homemade rice wine and soon enough was beginning to unwind. The atmosphere was joyous, and his relatives were all amused by my efforts to repeat Thai phrases. His uncles also entertained themselves by topping up glass my every time I took a sip, before announcing chon gâew! (Cheers!)

Everybody turned in for the night around 3am (including the kids), and I was surprised when, at around 6am, I awoke to find everyone already up, dressed, and sitting around outside drinking coffee. After some breakfast, we all got changed and made our way toward the temple. 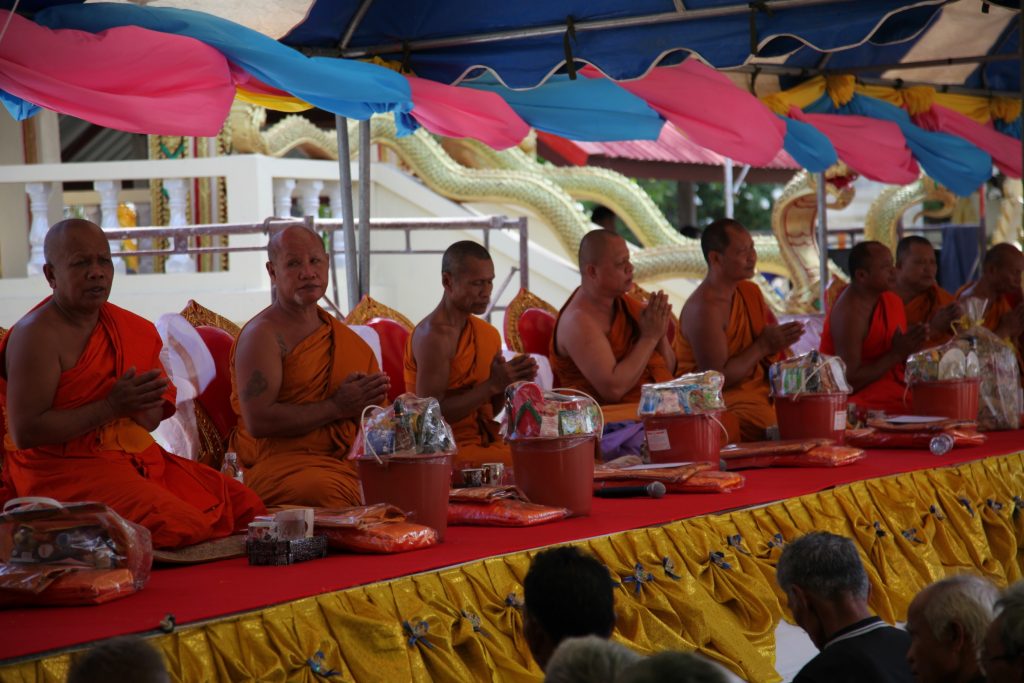 The village had been transformed overnight. Towering pillars were erected at the entrance of the temple, and, in addition to what must have been a dozen coaches, there were ambulances and even a small police presence. Gazebos and marquees encircled the grounds, offering shade, populated by scores of families preparing and serving food to a carnival of guests.

At the centre of all this, directly in front of the temple, stood a huge ornate podium. Built with steps ascending, not unlike a pyramid, it was decorated all over with bright mosaic designs against a white background with towering golden spires rising up from the base. At the centre of the podium sat a coffin, with the monk, Som Praritsudto, laying visibly within.

It was clear that this was no ordinary funeral, but rather, one for a kind of religious celebrity! I took a stroll around the grounds to get my bearings, and, having lost my guide, decided to seek shelter from the midday sun on a grass verge under one of the marquees.

No sooner had I bent my knees had a blanket been laid out beneath me, as I smiled and made a gesture of thanks, plate after plate of delicacies came down around me. Thun arrived and began chatting jovially with the family who was feeding me, it seemed as though they knew each other, and, at once, all of my anxieties had vanished.

The day proceeded in dedication to the monk with prayers, meditations, and ritual offerings of lucky coins and other trinkets. More food was eaten. And more locals tried teaching me some dialect (though partly just to laugh at my accent!).

When the sun set everyone congregated for the first time at the base of the structure and coffin. Elder monks spoke, led chants and songs and rang bells while praying for the deceased. The air was thick with the smoke of incense, and suddenly, everyone fell silent. Everybody around me turned their heads to face the night sky, where I vaguely noticed two cables, connected to the coffin.

As we stared upwards, my heart suddenly leapt! Seemingly from nowhere what seemed to be two fireworks came whizzing down the tracks of cable with a penetrating, high-pitch whoosh, before simultaneously slamming into the metal coffin frame, swallowing the body in fierce flames. 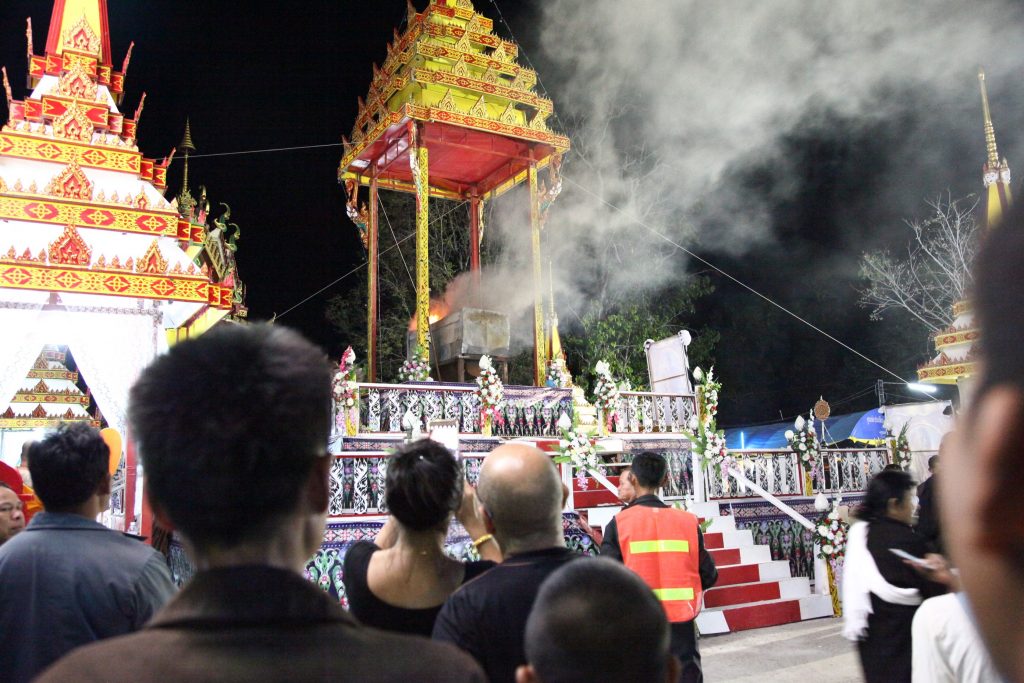 And all at once, the party recommenced. Roaring crowds all around jumped to their feet and rushed to the podium as monks in orange robes tossed piles of lucky coins into the air. The coins came down like golden rain between the procession and the deceased, glimmering in the firelight. There were more than enough for everyone, and I was lucky to be offered one as a gift from one of the children sitting nearby.

As the body burned, the festival continued. An outdoor cinema was assembled in moments, as well as a music stage. We partied until 4AM before finally dozing off. This celebration of life would continue for another two days and nights.

Benjamin Millson is a British freelance writer with a love for literature, travel, and the environment. He works full-time in fashion and started his freelance career copywriting for top London-based menswear brands.