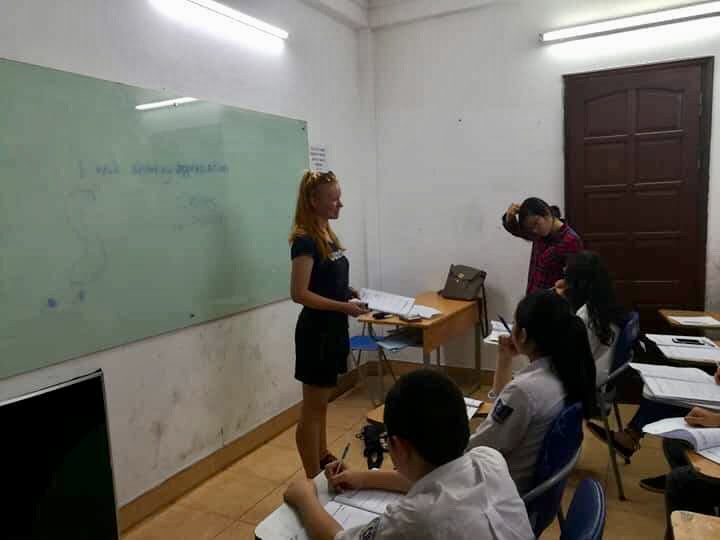 No Rules Vietnam – An Unexpected Local Encounter in Hanoi

While travelling in Hanoi, Vietnam, a surprise offer on a Couchsurfing appleads to an unfiltered experience of local life.

It was a fairly normal travel day; chaotic, hot, sweaty, disorientating. Our eyes twinkled with a sense of adventure and energy levels were high, being pumped up on Vietnamese fried noodles and the ever-neutralising Coke. The evening stretched ahead, and we wanted to try one of the several Karaoke bars nestled in the vibrant city of Hanoi.

“Pop it on Couchsurfing Hangout to see who’s keen?” Suggested my boyfriend.

We chucked it up online to see if there were any biters and checked to see what other people in the vicinity were doing. Soon enough, we received a message from a young, local woman.

But it wasn’t what we expected…

The young woman specifically didn’t want to go to karaoke with us, but instead offered us the opportunity to be guest speakers in an English lesson she was teaching in the evening. It was in two hours’ time, just outside the historical centre and she would pay for our transport there and back. “How cool is that?” We could talk to other local people at this language school and see how they learn English. Something different for the night! We jumped on it, as any wide-eyed, down-for-anything, experience-loving travellers would.

The five kilometre bus ride alone took an hour, threading slowly through rush hour traffic, the driver making decisions at roundabouts that would lose you your license anywhere else! We were thrown around in the back, choking on fumes, our PM 2.5 masks firmly strapped to our faces.

Falling out of the lumbering vehicle at what we hoped was the right spot, we were greeted on the street by a young guy speaking English. He took us up a couple of floors of a tall, old building and handed us over to a woman who appeared to be the teacher of the class. She had a workbook in her hand and explained the exercise of the day: the topic was ‘gifts’. That was it. She led us into the class, followed us, and stood to one side.

Eleven indifferent faces stared back at us standing awkwardly at the front of the classroom.

“Maybe you can introduce yourselves and start”.

Ohhhhhh. The penny dropped. You could almost hear it hit the floor in the silence. The earth-shattering crash it had in my head was evident on the faces that were now curious.

We weren’t here as “guests”. The moment we walked into this classroom, we became fully-fledged teachers. Despite no known teaching qualifications, we were apparently more qualified than the local teachers here purely because we were white. (My boyfriend is not even a native speaker – but no one seemed to mind!)

It was a decisive moment; time to own the stage and lead this class.

I find the best response in such a situation is to attack with unrelenting enthusiasm, and that we did, telling our story. Sure enough, after ten minutes, the teacher left. She did not return for the rest of the lesson.

Diving into the exercises met blank and unresponsive faces. We teased out some answers and tried to gauge the level of the students. We took turns in speaking and asking and giving examples, continuing conversation and jumping on anyone’s involvement to try and extend it. The energy in the room started to pick up.

A wobbly map of Vietnam drawn on the whiteboard piqued engagement – a terrible outline and highly inaccurate, but we asked for help with how to make it better. When all the exercises were finished with time left to spare, we improvised and made up a game to play on the whiteboard. Soon, everyone was coming up, brandishing pens and eager eyes and adding something to our vision of learning.

When 7:30pm arrived and there was still no sign of the teacher, we tentatively ‘released’ them and automatically said ‘see you next time!’, correcting ourselves quietly, “have a nice life!”.

As the flood out of the door cleared, the teacher reappeared and invited us for dinner upstairs (three flights of stairs actually). Two Ukrainian guys also turned up and our teacher spread out some homemade food on the table. Conversation was achingly slow between all jigsaw-piece-parties, but we managed to figure things out. The penny dropped even further – from the top floor all the way to the bottom of this gigantic house of mystery.

This teacher was actually a full-time civil engineer.

Her office was 5 minutes away. She lived in one room on the top floor of this building, and she took evening classes at this English school in return for her board.

The Ukrainians were couch surfing travellers, staying on her sofa for free. They were also now non-official teachers at the school, taking their own classes on a semi-regular basis.

We figured she has a solid business approach: finding willing and activity-loving people to teach the classes on a one-off temporary basis so that she can have the evening to herself after a full day at work.

We glanced playfully at each other, motioning “Of course, N.R.”, a term we had started to use, meaning “No Rules Vietnam”. It just explained everything in unexplainable circumstances.

Sitting in a dimly lit, poorly ventilated room with a bowl full of white rice in front of us, our teacher explained in her own words that she had “made it”. When she was growing up, her country family was so poor that they couldn’t afford to eat the rice that they grew; they had to sell it. Instead, they ate the mice that they caught on the fields. And now she is an Engineer.

Similarly, we are made to believe things about foreign countries which turn out to be very different – and rather undocumented in favour of glamorous photos of coconuts and beach bodies.

But we know, deep down, the world isn’t all sunshine and rainbows. Nowhere is a perfect paradise, despite what we see online and choose to show each other.

That’s why we travel. To find the reality behind the scenes and to challenge what we are continuously made to believe.