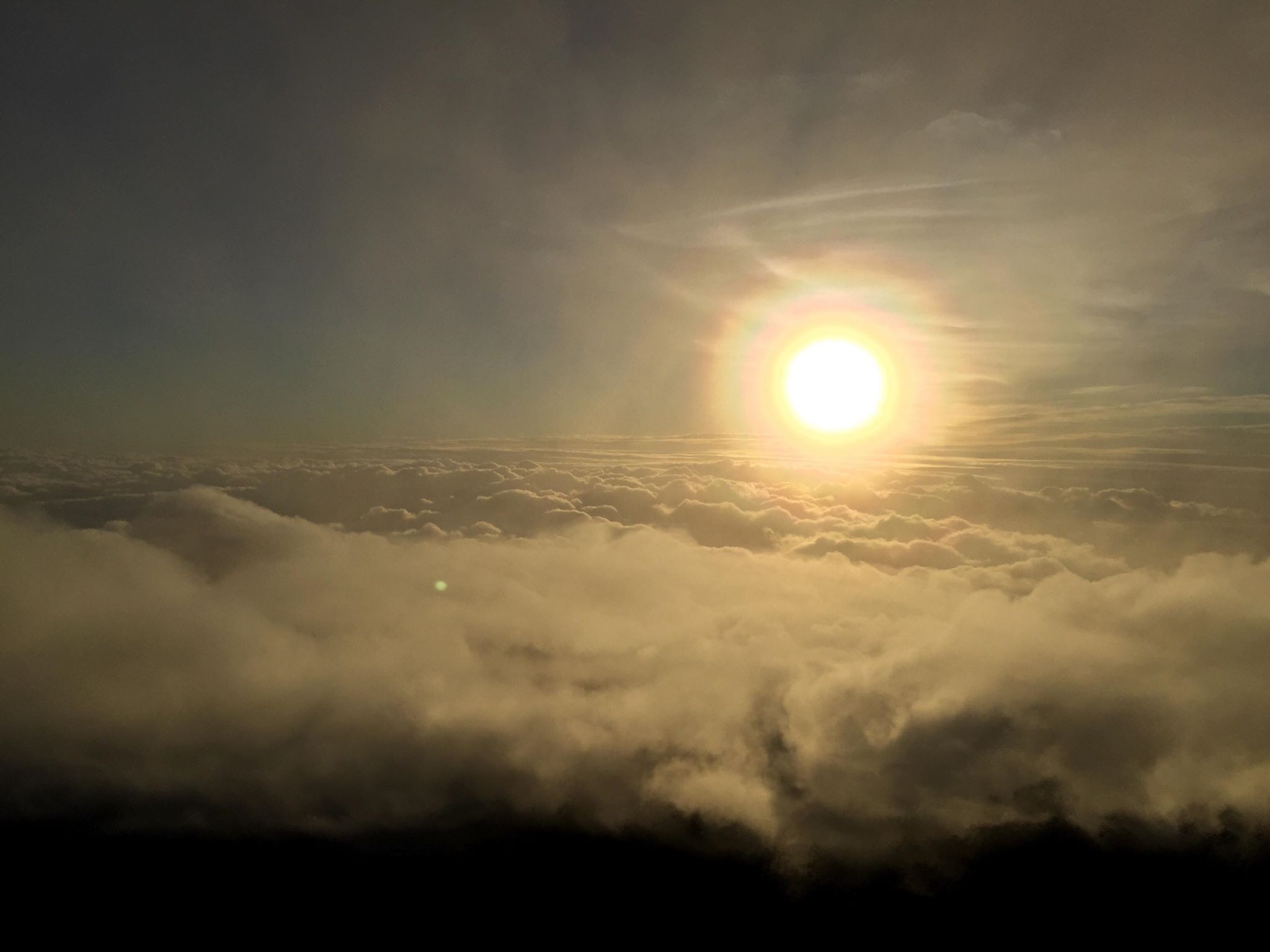 The Typhoon on Mt Fuji

It was around 4pm on a summer evening, when a latent hangover started digging its heels into the flanks of my brain. Why we decide to stay in Shibuya’s Senta-gai Karaoke-kan until 4am the night before attempting to summit Mount Fuji, is still not all that clear.

A stuffy Thomas the Tank Engine-themed bus (only in Japan) crept up the snaking paths of the Fuji foothills, trundling towards our starting point at the fifth station of Japan’s most revered volcano. It was just before sunset by the time we arrived.

Japan is, of course, the land of the rising sun. In light of this, many climbers opt to scale the mountain overnight in order to watch the sun rise from the nation’s highest point. It’s a bucket-lister, a one-off, a poetic travel memory that one can bring to the grave. At least that’s how I’d pre-emptively pictured the event in my head.

There were whispers of an incoming typhoon towards Fuji that evening, but whether the sake was still coursing through our veins, or whether we were just being foolhardy, the consensus was “ah, we’ll be grand”. Plus, my climbing companion was only going to be in Japan for another 10 days or so, this was his one and only chance to climb Fuji.

Before embarking on the endeavour, we sought some reassurance from the local mountain guides. The response was a unanimous, “we don’t recommend climbing tonight”. In hindsight, I’d say we chose to not hear. Ignorance is bliss and all that.

For those of you who are unfamiliar with the Japanese summer, a noteworthy point is that it’s bloody-well hot. 35/36-degree days with 99% humidity are all to frequent. So, our expectation was that, in spite of Fuji’s 3,700m elevation, there’s only so cold it can get. Right?

The hordes of climbers kitted out in North Face wet gear and Patagonia climbing equipment should have been an early indicator that our shorts, tracksuit bottoms and light woolly clothing may have been a slightly misguided choice of apparel.

In any case, after a quick sushi-bento box and a sayonara to the setting sun over the verdant hills to the west, off we went on our merry way. The plan was simple, get to the top as fast as possible and then cross whatever typhoon-shaped bridges may befall our path.

In spite of the previous night’s galivanting, we zig-zagged up the mountain at a surprisingly ferocious speed, setting a pace that the majority of other climbers simply couldn’t keep up with. For better or worse, we are both pretty competitive, so being left in the wake of our fellow climber was not an option.

From the sixth station onwards however, we started to get a real sense of what we’d gotten ourselves into. The artificial lighting along the steeper rocky inclines became sparse. It was a case of ungracefully scrambling over boulders with sub-standard footwear and the aid of scant much more than a cheap pocket torch.

And then came the rain.

At first a light drizzle. Manageable. Then a bit of shower. A slight problem, but not too much of cause for concern just yet. Next came the downpour. Uh-oh.

And then in a wonderfully sadistic case of symbolism, on the most famous of Japan’s three sacred mountains, the heavens well and truly opened, unleashing their wrath upon us. The proportions of that rainfall were epic, biblical.

It turns out that knitted jumpers, and novelty Mount Fuji rain jackets are pretty pathetic when it comes to keeping their wearers’ dry. In spite of our perseverant attitude, the time had come to accept a temporary defeat.

The first mountain hut rest stop that we came to in the midst of this typhoon was just below Fuji’s eighth station. I barged in like a possessed beast, water dripping from every orifice, saturating every fibre of my being.

I’ll never forget the question that the staff member of the station asked me as I walked through that door. With no sense of discernible irony what-so-ever, she said the words “What do you want?”

I didn’t know whether to laugh or cry. “Hmmm, how about to be dry?”
When I reflect on this moment my brain gets ensnared in a memory-enveloping red mist, so I can’t remember the exact dialogue which followed, but the upshot is this, we were shortly back on our way up the mountain.

It’s not often that I encounter a situation where I feel truly vulnerable to the raw power of nature, but that evening, I experienced one of those moments. Like two battle-hardened veterans, we continued as best we could until eventually there was no choice but to get into one of those mountain huts. I don’t mean to be hyperbolic, but it felt like our lives depended on it.

We were just shy of the ninth station, only a few hundred metres from the summit when our race had officially been run. The hut that took us in, drained the last of our cash, but unfortunately that was the only thing successfully drained in there that evening. I was hoping for a crackling brazier with somewhere to stay warm, dry our clothes and reflect upon the events that had just taken place.

Rather, I spent the night drinking a cheap cup a convenience store sake, scooping up mouthfuls of tepid miso soup, leafing through a damp copy of Ayn Rand’s The Fountainhead, and most importantly, failing to dry my clothes.

Eventually at around 2am we dozed off.

After a soggy, dream-wrought sleep, my companion shook me awake around 4.30am. Word around the hut was that the typhoon had slightly subsided, but was to come back with a bang, and soon. It was a situation of descend now, or possibly be held captive up here for the next who-knows-how-long.

We threw our clothes back on, the layer of moisture coating them helping to wake me up a little (the only redeeming feature of my wet underwear I may add), and down the mountain we went. If you have climbed a mountain before you will be aware that the descent can be seriously painful on the calves, especially after a stressful workout on the ascent. Mount Fuji was proving to be the worthiest of adversaries, with no signs of letting up.

But then it happened.

As the lingering grey clouds, signifying the remnants of one storm and the calm before another, started to creep slowly upwards, the rising sun was slowly, splendidly unveiled. Okay we weren’t officially at the summit of Fuji when it happened, but it happened nonetheless. And it was absolutely glorious, let me tell you.

No superlatives are capable of describing that sight, we simply don’t have the adjectives in our lexicon. After staring adversity, its horrifically wet and windy face the previous night, it felt like the sweetest of triumphant payoffs. I’ve always been a believer that hard tasks tend to give the best rewards, and that moment was living, sensual proof.

There’s an old Japanese proverb related to climbing Mount Fuji that states, “Once a wise man, Twice a fool”. While I agree with the sentiment, I would also revise the proverb to “A wise man climbs Fuji once, a fool climbs Fuji twice, and an even bigger fool attempts it in the thrall of a typhoon with no waterproof clothing, no plan B and with a friend whose foresight is of an equally inadequate degree”.