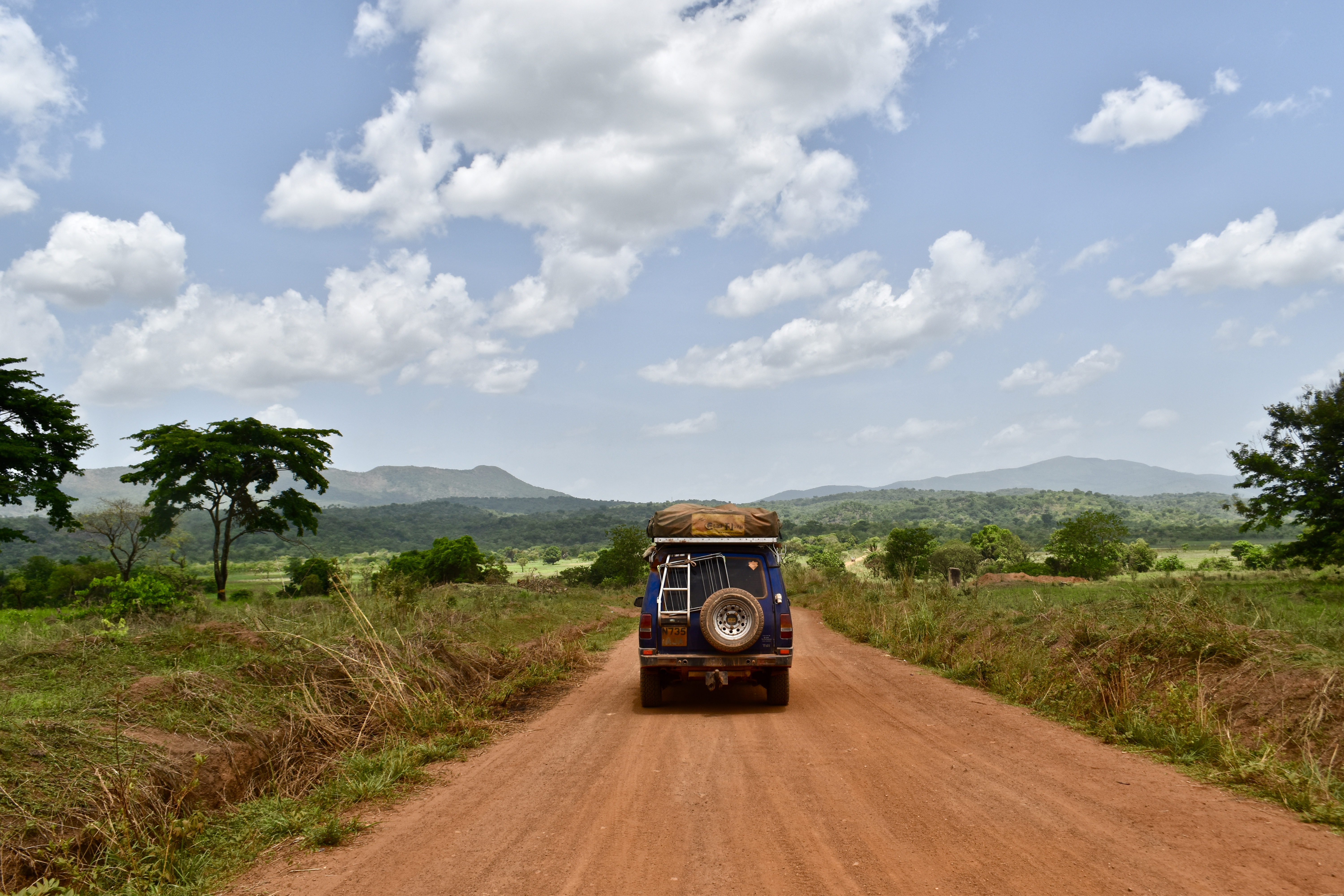 On a long journey through Africa, a Kiwi traveler struggles to explain to a Guinean border guard exactly why she wants to be let in.

“So, why do you want to come to Guinea?” the man at the border said, fingers intertwined and settling back in his chair for a long explanation.

“Just to see it, really. For tourism.”

“Ahh, tourism.” It seemed he was not overly familiar, or at the very least not satisfied with our explanation.

My boyfriend and I shot confused looks at each other. We were well-practiced in denying bribes and shaking off the most persistent of street hagglers, but explaining the concept of tourism to an immigration official was an exciting twist in our daily routine of shit-talking.

“To see…(I struggled to think of a particular sight mentioned in Lonely Planet’s guide to West Africa), the waterfalls?”

A smile flickered on his lips and quickly disappeared. “You don’t have waterfalls in your country?”

“Well, yes we do. But your waterfalls are different.”

“So you just want to see the waterfalls and then go?”

Panic set in. Our Guinea visas, already paid for and sitting proudly in our passports, had been the most expensive of all the West African countries by a long shot. Were we about to get turned away over the intricacies of waterfalls?

“We want to meet the people of Guinea as well.”

The tiniest tease of a smile again. Was this guy for real? Ticking boxes and stamping passports was clearly too easy a job for a young, university-educated man like him. Was all of this just an antidote to the endless boredom of sitting in a tin shack under the relentless sun waiting for drug traffickers?

“I see white people coming through here, Chinese people, and what do they want from Guinea? To take pictures? To look and go home? What is the point? Why do you do it?”

It was not a bad-natured question; he wasn’t angry, but he was….perturbed. Why did we want to come to Guinea? Why did we want to go anywhere? Why are humans hard-wired to feel unsatisfied by the comfort and routine of home to the point where people travel to the other side of the world, look at things for a bit, and then go back to the comfort and routine they so despised just a few weeks or months previous? The more I thought about it, the more ridiculous it seemed.

No answer, or at least not a succinct one came bubbling to the surface of either of our heat-addled brains.

“We need to go through Guinea to get to Côte d’Ivoire,” we said, defeated.

“Ah, I see” the official said. And with a few ticks and stamps, he shook our hands, wished us well, and sent us on our way.

In a way, it was the best possible introduction. Guinea doesn’t seem to get much credit as a travel destination by either foreigners or people who live there. Although, admittedly, Conakry might have something to do with that. The writers at Lonely Planet, whose job it is to convince people that even the most diabolical cultural sinkholes are worthy of a visit, describe it as a “mess of crumbling buildings, pollution, rubbish and traffic jams,” which, to be honest, is putting it mildly.

There’s nary another African capital that gets as much of a bad rap as Conakry, and on the surface, it’s easy to see why. Smoke rises lazily from veritable volcanoes of burning roadside rubbish. The sound of generators and heavy bass from the city’s many nightclubs reverberate down the streets til the early hours. Power comes and goes as it sees fit, and even high level office buildings and embassies have to deal with the constant strobe effect of the tempestuous power grid. A simple drive around the city is a test of both driving prowess and mental fortitude as you weave your way in and out of traffic jams, past toppled trucks, and run the gamut of bribe-seeking gendarmerie. In saying that, it’s an awful lot of fun.

Guinea was the epicentre of the catastrophic 2014-2016 Ebola outbreak. Now that the country has recovered, you get the sense that while people might still feel like things are a bit shitty, it could be a hell of a lot worse. It’s a joy in any country to walk the streets alone as a woman and feel safe, and in Conakry I did. No one tried to drag me into their shop, no one made lewd gestures; I received several jovial ‘bon arrivees’ and a very discreet marriage proposal at a phone shop and that was it. Delightful. At night, the streets of Conakry come alive as people spill out of the myriad nightclubs and start their own parties in the street, sucking on shots of bitter cola, served (like everything in West Africa) in tiny plastic bags. We went for a late night stumble to a burger bar and were swamped with jolly, slightly pissed locals wanting to translate for us. The French word for hamburger is, helpfully, hamburger, so we didn’t really need the assistance, but we appreciated it all the same.

Guinea isn’t big on sights. There are no impressive monuments to tick off, and many of the best things to see are hopelessly under-advertised. (A visit to the Keita Fodeba Acrobatic Centre is a guaranteed unforgettable experience, yet the centre receives barely any funding or publicity; definitely check it out if you go). The singular museum we visited consisted of two rooms, a handful of empty and cracked glass cabinets, and some wooden carvings. There were no signs or labels, but there were several stickers plastered around the place indicating that the museum had been created with financial help from a German organization, which presumably hadn’t visited for some time. As such, Guinea’s real allure is in the highlands, but once you’re there it’s hard to imagine a more idyllic place.

The driving in the highlands is slow. Ruts and potholes are so deep they scrape your side mirrors, but the deep red of the long dirt roads against so many layers of green is pure perfection. Mango trees hang heavy with fruit, villagers nap in the shade of palm-thatched lean-tos, and giant yellow school buses shipped from America reading ‘DISTRICT OF COLUMBIA’ trundle past neighborhoods of traditional round huts.

You’d be hard-pressed to find friendlier or more genuine people than those in rural Guinea. The religious tolerance is such that it’s not uncommon to see a woman in full niqab carrying her shopping past a group of topless breastfeeding mothers. It’s live and let live, an advertisement in acceptance the West could well learn a few lessons from.

If you go, stretch your waving wrist at the start of the day, and prepare to say dozens of “bonjours,” “ca vas,” and “salaam aleikums” an hour. People often yelled “les blancs!” (the local phrase for ‘white people’) at us, but it was more out of surprise than anything else. Need to pull over and stretch your legs? Get ready to shake the hand of everyone in a half kilometer radius. Fancy a quick local restaurant meal? Fix that grin on your mug because you’ll be posing for approximately 500 photos with the restaurant owner, who may or may not mistake you for another white woman who visited seven years previous. No one wants money; everyone wants hand shakes, fist bumps, a chance to practice their English, or just to share a joke. It feels like an olden day Africa that barely exists on the rest of the continent, and it’s fabulous.

There are half a dozen beautiful waterfalls scattered around the Fouta Djalon region, but we went to the Chutes de Saala. It was at Saala Falls where we met Razak, the joint-puffing, dreadlocked son of the local Imam. Razak had two wives, one in his village, and one, inexplicably, in Philadelphia.

There were a few other overlanders parked up while we were at the falls, and one night an acoustic guitar appeared. It soon fell into the hands of a gleeful Razak, who didn’t know a single chord, but was such an enthusiastic musician and on-the-spot lyricist you really couldn’t fault his performances. There were many songs stretched over a couple of nights, but the most memorable was a rousing rendition of ‘Salaam Aleikum, My Lover,’ a repetitive but highly theatrical 17 minute experience.

We are the white people. We are the black people.
I have a wife. What is the business.
I gotta get my money baby! You gotta get your money baby!
Salaam aleikum my lover, aleikum salaam.

Razak said he caused a minor scandal in his father’s village every time the two of them were spotted in the same car, conservative elderly locals shocked to see their religious leader sharing airspace with an unapologetic Rasta. I wondered what Razak’s father would have thought of the rasping, jaunty musical masterpiece that was ‘Salaam Aleikum My Lover,’ a song which is still stuck in my head to this day.

There are so many experiences to be had in a place like Guinea that you simply can’t put in a guidebook or rate online. Generally, ‘washing your undies in the river while the locals laugh at your appalling technique’ does not slide gracefully into a listicle, and yet it’s those experiences on any trip that far outshine any museum, monument, or slickly organized group tour.

Why did we want to come to Guinea, and why exactly did we enjoy it so much? I’m pretty sure I still couldn’t sum it up elegantly enough to satisfy Guinea’s most diligent immigration official, but that’s all part of the appeal.

A passionate believer in adventure on a shoestring budget, Kristin has spent the last three years travelling by road all over Europe and Africa, from the mountains of Albania to the voodoo villages of Benin. She previously worked as a television reporter, a job she hopes to go back to if she can ever manage to settle down and grow up.