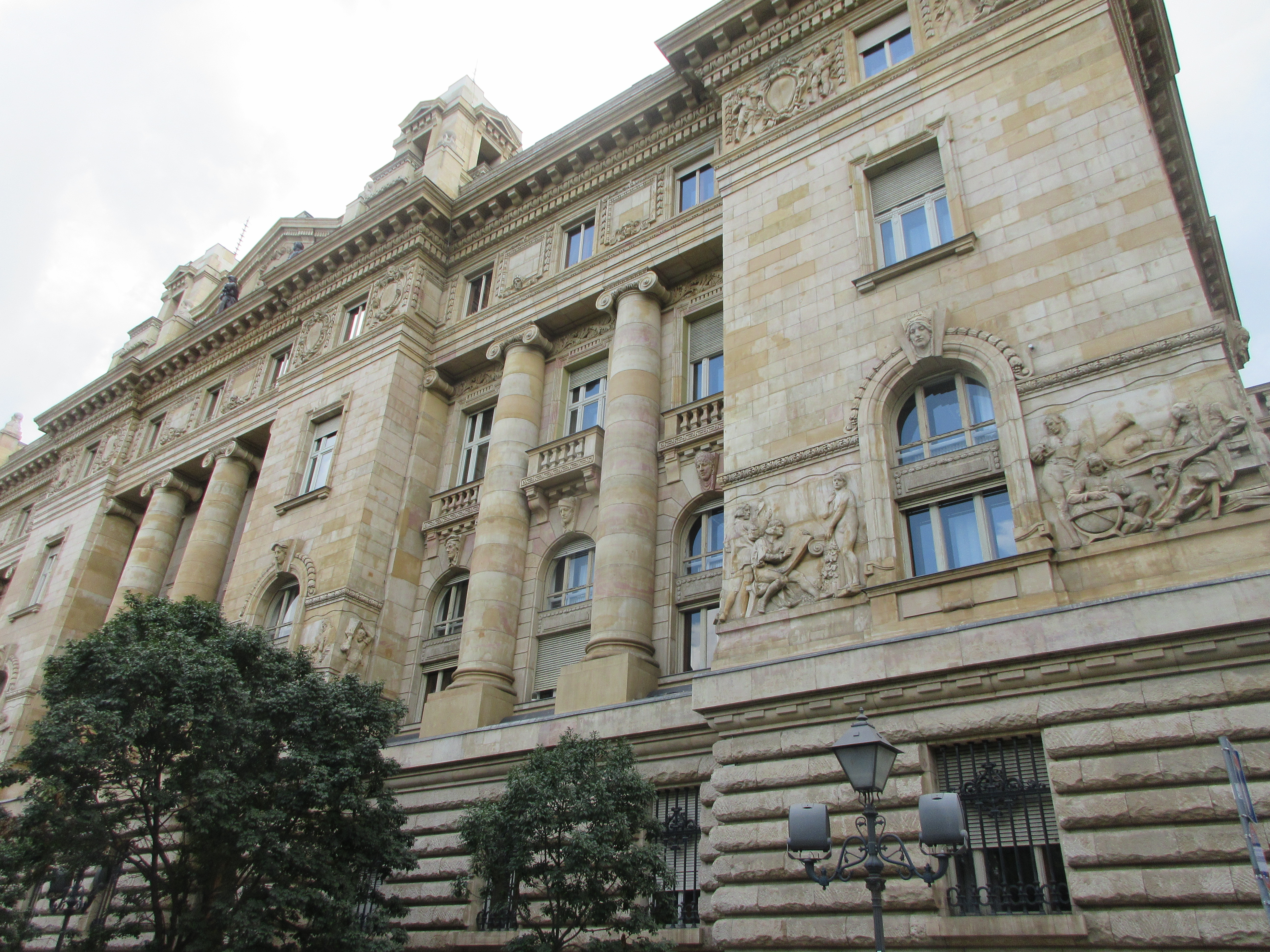 By Eileen KayAugust 9, 2019Europe
No Comments

While researching her family history in Budapest, an American writer takes a walk through Freedom Square, encountering fresh controversy with every step.

“Freedom Square” was named to celebrate the removal of a palace representing centuries of unwanted rule by the Habsburg Empire, on the site of which this square was created instead.

My local guide Mari and I entered from the corner where a grand, golden, classical structure commanded attention. It was the former Stock Exchange, she said. This seized my stomach. GGF Lipot, an ancestor whose story I have come here, in part, to pursue, would have worked here at some point, surely. He would have gone in and out those doors. It housed the national television station from the 1950s to 2010, but now it stood empty, waiting for an investor. I was transfixed while Mari tugged my elbow to our first feature on the right.

It was a church, with wrought-iron bars and a bullet-proof glass cabinet housing a bust of an extremely controversial figure, Miklos Horthy, long-time Regent of Hungary from after the First World War through most of the next. His detractors call him a vile betrayer, and the whole reason the Nazis did what they did. Others say he was a weak, naïve man who was out-maneuvered. He eventually halted deportations to death camps, but only at the last moment when it was too late. Certainly, every time his name came up, Hungarians threw their heads back in a deep sigh, not knowing where to start.

When the Horthy statue was installed, there was protest. At first, it stood outside the church in the public square, but there were attempts at vandalism. Then the church built the iron gate and placed it inside, safe on their own territory. But vandalism continued, so bullet-proof glass was introduced.

Our next controversy was the memorial to victims of Nazi Germany. How could that be controversial? It portrayed the evil eagle of Germany crushing the poor helpless and writhing Hungarian nation down low. And yet this symbolism continues to be hotly disputed. Relatively low numbers of Nazi troops were sent into Hungary because there were already local Fascists such as the Arrow Cross who were more than eager to collaborate. In that sense, Hungarians turned on each other. The enemies were not all outsiders.

The fence in front of the memorial was covered with mementoes from protesters, like photos, old suitcases, abandoned shoes, petitions. There is an organisation today actively asking for this memorial to be changed. They want local collaborators acknowledged. Next controversy:

A tower loomed with a hammer and sickle and Russian writing. It was next to a thick row of tall trees between there and the US Embassy nearby. It goes by many names. Officially it’s “The Memorial to Soviet Liberation of Hungary in World War II from Nazi German Occupation”. The word “liberation” has been questioned by those who call it raping and conquering. The phrase “liberation of Budapest” is one I saw time and time again, with no alternatives. I too used this phrase, before I learned more. Invading Red Army soldiers inflicted an estimated 200,000 assaults on women, and it’s said that few females escaped unharmed. Overall, the Communists simply took over, not to liberate, but to impose another occupation. The lamps that lit the tower at night had been vandalized often enough to be put behind cages.

We passed an unexpected statue of Ronald Reagan. We didn’t linger.

At the end of the square, the final memorial was a charming sculpture of a man in a visionary pose, gazing up and across to nearby Parliament, standing atop a curved footbridge. It’s halfway between Parliament and Liberty Square, the symbolic spot where Imre Nagy led revolutionaries in 1956, halfway to freedom. He has been called a controversial hero; he was twice Prime Minister but is generally thought of as a martyr for freedom. It was good to end on that note. (However, in 2018, this statue was removed.)

Mari showed a keen eye for the captivating features of Art Deco architecture in which Budapest is rich. Unexpectedly, while walking along Miksa Falk street, we strolled past a full-sized bronze statue of actor Peter Falk in his Columbo character. Next to him was Dog, with children happily climbing on him. Mari said that, back in the day, when Columbo appeared on Hungarian TV, the nation adored him. I looked into the actor’s connection to the street. In a quote given to the Wall Street Journal by Antal Rogan, district mayor at the time, the actor may have been related to the nineteenth-century Hungarian political figure Miksa Falk, for whom the street is named, although he conceded it was yet to be proved. The 2014 statue was part of an urban rejuvenation project, three years after Falk’s passing but a few months before Rogan ran for re-election.

This was a strange controversy. Google yielded eight articles calling Falk’s Hungarian ancestry an urban myth. Many complained the statue cost over $60,000 and called it a pre-election stunt. Three locals I questioned thought Falk was indeed a relation of Miksa Falk, didn’t see the problem and dismissed these questions. He was hugely popular here, and the program was beloved. Dare I say, scratching my head, that we may have an unsolved mystery here?

At the end of that long, interesting day, I was hungry when I got home to district VII. I thought of a pretty place I kept wanting to try. It was not dead cheap, but today was the day for something a touch nicer than usual. The most unusual thing on Ghetto Goulash’s menu was “rooster testicle and cock’s comb stew with white peasant bread”. I didn’t try it. Maybe another time I’ll be more butch. Also, it’s just silly that what was once poor people’s stew is now served on white linen with a dry white wine. I had a classic, simple chicken paprikash, and it was gorgeous. No controversy.

This is an edited extract of Noodle Trails 2, a Genealogy Adventure: My Secret Century in Budapest by Eileen Kay

Eileen Kay is a seasoned solo traveller, long-term ex-pat and author. Previously she was a BBC sound editor, radio traffic presenter Carmen Ghia, and half of comedy magic act Dork and Tacky. She fled her early years in the USA, lived in London for 20 years and Scotland for 10. Now she splits her time between Europe and Asia, and her humour between sarcasm and irony. She’s author of two travel memoirs, Noodle Trails: Fair Trade, Dung Trade and Travels in Thailand and beyond, and Noodle Trails 2, My Secret Century in Budapest.