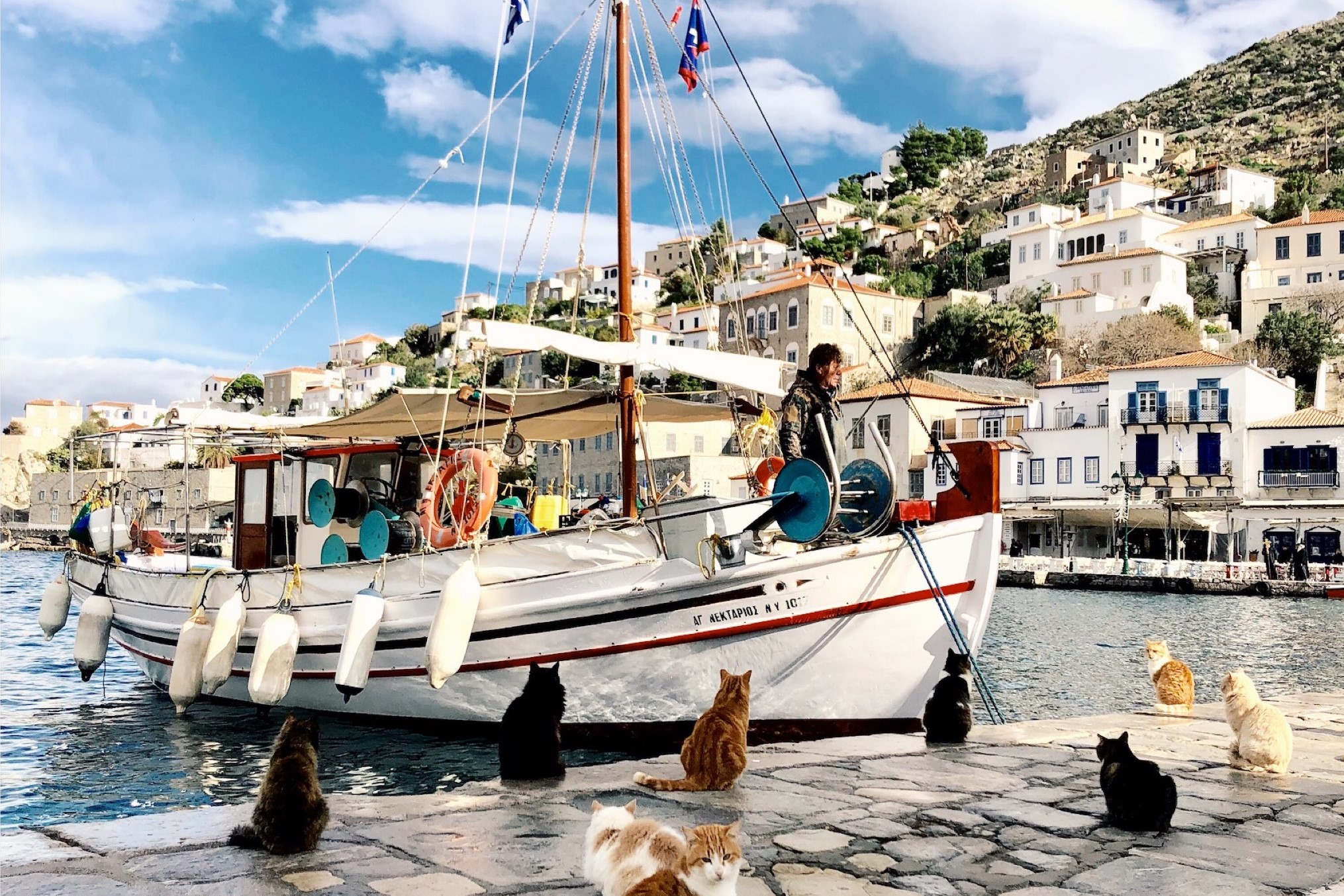 By Erin SkahanSeptember 3, 2019Europe
No Comments

On the Greek island of Chios, a traveling couple discovers the warmth of Greek hospitality, complete with spontaneous jam-sessions and declarations of undying love.

The Greek island of Chios is referred to as the Mastic Island due to its centuries-long cultivation of a rare tree resin. Masticha is a clear and sticky, sap-like substance derived from tiny incisions made into the trunks of the mastic tree. Trees producing mastic can grow in similar climates, but no one has ever managed to get them to produce the sap outside of this island. Due to its rarity and endless number of uses, great care has been taken to sustain it. It also explains why Chios isn’t up there with the other heavy-hitting Greek tourist destinations like Crete and Mykonos. They’ve never needed tourism to bring income to the island. Mastic has provided economic stability since Greek antiquity.

We arrived in Chios to meet a gleaming Angelika, the old woman from whom we rented our apartment. Welcoming us with enthusiastic kisses, she insisted we think of her as our Greek granny. We were hungry, so she directed us towards a local favourite, Kechrimpari, for dinner. Traditional Greek tavernas usually serve food family style, without a menu. Once seated, we were asked to choose between meat or seafood. Once that had been agreed upon (a decision that had to be unanimous for a small table), we waited. The service was not speedy, and the owner managed the floor alone while her mother rang people up at the register and sometimes jumped back to the open kitchen to help the father while he juggled tickets, operated the grill, and plated food. These experiences can test your patience but also help to explain the relaxed attitude that permeates Greek culture, inspiring socialization to pass the time. Hearty laughter echoed throughout the room, glasses clinked at each declaration of “yamas!” and the ever present smell of cigarette smoke mingled with the aromas of grilled meat and garlic. Despite a 2010 ban on smoking and “no-smoking” signs almost humorously posted everywhere, Greeks continue to be most dedicated smokers in Europe. Dining in smoke-filled restaurants with little to no ventilation is something you just have to get used to.

Courses arrived as they were ready. First, a Greek salad with a full slice of feta, followed by a salad of black eyed peas with tuna, oil, red peppers, onions, and cilantro. Next came a wing of salahi, native stingray, served in oil and fresh herbs. The meal ended with plates of fried sardines and whole prawns. This monumental meal came to a grand total of €28. We spent four hours eating, drinking, and observing the few people who remained as they unhurriedly participated in never-ending rounds of ouzo. The owner took a much-deserved seat at the bar, and, along with her parents, lit up a cigarette. Thus began our “when in Greece” habit of doing the same.

After an intense goodbye ceremony with Grandma Angelika, with over-the-top declarations of love between this sweet Greek woman and my equally impassioned Italian partner, it was time for us to travel on. She sent us away in tears with a bag full of pasta, sweets, and herbal mountain tea.

We headed to nearby Karfas, a normally touristy resort suburb just south of Chios town. It’s a place we’d never normally consider based that description, but the beaches are beautiful and deals are plentiful in the off-season. We rented a huge beachfront apartment with a balcony view of Çeşme for €46 a night. The village was quiet, and most of the time the beach was empty.

Walking home our first night, we heard the distinct sound of bouzouki coming from a building nearby. This double string instrument has a teardrop shaped body and sounds like a high-pitched guitar. We were waved in by Giorgio, the ex-owner of the cafe. Even through the quiet winter months, a five-piece band gathers here, lead by a bouzouki-playing cop. This motley troupe of musicians brings life to the quiet village in winter. Until we were summoned inside, there had been no audience. We ordered a bottle of ouzo, which we were quickly becoming fond of. The bouzouki cop began gently with a melody. He was then joined by a woman who belted out thick, guttural tones. Foreign words full of emotion shook the room like heavy winds preceding a storm. Her intonation alone channeled emotion, bridging the barrier of language. Between verses, she took deep drags from a series of constantly lit cigarettes and casually replied to text messages.

Learning my partner was a musician, Giorgio abruptly kicked the teenage guitar player out of the band. Despite his empty repertoire of Greek traditional music, he insisted he join in. After a few hilarious—and somewhat painful—attempts to coordinate Wish You Were Here, it was time for us to go. We were cajoled into “One more ouzo for my guests!” no less than four times, finally being released at 3 am. During this time, Georgio shared his insight regarding Greek music, village gossip, and the complex relationship between the Greeks and Turks. We stumbled home from another experience which flaunted the social ease of the Greek people and woke up grateful, despite the resulting hangovers, knowing everything about everyone in town.

Forcing our weary selves out of bed the next day, we visited the mastic villages of Pyrgi, Mesta, and Olympi on the western half of the island. The intentionally maze-like construction of the towns and houses incorporated ladders, hidden doors on rooftops, and underground tunnels, confusing and frustrating pirates for centuries. This place is jammed with tourists in the summer. In December, the villages seemed deserted. We were greeted only by curious cats, eager for attention. Hibernating symbols of tourism were evident in the town square: chairs were stacked for the season, and kiosks advertising local honey and jams sat bare. We found a bar for coffee and sat in front of the emptied square. The visually striking “painted village” of Pyrgi belonged only to us and the six cats who casually positioned themselves on and around us.

On the drive home, there was only one restaurant with lights on in the coastal village of Thymianon. We heard shouting coming from a tent extension, so we first entered the main restaurant, thinking it might be a private event. The place was empty apart from two guys smoking cigarettes. We asked if they were open. They exchanged a glance between themselves, and, as often happened in Greece, we were waved inside.

The tent was buzzing with people who all seemed to know each other. It was characteristically smoggy, and our eyes needed 15 minutes to adjust to the level of smoke. Plates were being passed around over heads, glasses clinked to choruses of “yamas!! yamass!!” and the DJ bounced into action. What followed was a beautiful series of dances between friends. Two men grasped each other by the back of the neck, bringing foreheads together. A woman was called to the dance floor, surrounded by female friends on their knees. A man joined her in the center of the circle, and the guy who let us in approached the couple, carrying beads. He tossed a pile of napkins over their heads as everyone cheered, and we heard the popping sound of champagne.

We had unknowingly been invited to take a table at the wedding rehearsal dinner of a local couple. Somehow, we were granted access to an event that was intensely personal, yet it lacked any hint of formality. Without knowing the name of a single person in the room, we were made to feel welcome. We stayed in the background and observed over our carafe of wine, clapping when everyone else clapped, half wondering how we ended up there and honoured that it was so.

On our final night in Chios, we sat down for a very early dinner at a restaurant called O Passas—early because we were being budget conscious, and by having only one meal a day, we spent less. Greeks generally eat around 9 or 10 pm, so this meant we were often the only ones in the restaurant. Perhaps due to the social and hospitable nature of the Greek people, our singularity dictated that the owner or chef pull up a chair and join us during the meal. In five minutes, we had the two owners and their mother at our table. They described everything on the menu, including their special way of preparing grilled octopus, for which I’m sworn to secrecy. We let them prepare whatever they thought we should try. Suddenly, the power went out. We were told it was normal, and they had a small generator and gas so were still able to make food. Everyone returned to the table, which was now necessarily, and also romantically, full of candles. Together we watched a funeral procession pass by as the sun descended. They told us about the woman in the coffin, her age, how she died. Villagers were dressed in black, a striking and emotional contrast to the colourfully painted houses and the orange hue of the sky. We stayed and talked for hours. I was invited back into the kitchen where, by torchlight, the uncle showed me how they prepare the octopus tentacles. We soaked up the undivided attention and warm hospitality of this proud family. It was our last night on the island, and it perfectly concluded all of the warmth and familiarity that we’d experienced in Chios.

Erin Skahan is an experienced solo traveler interested in how food shapes culture. Her travel musings and photography can be found on her website, The Rouxx.com.