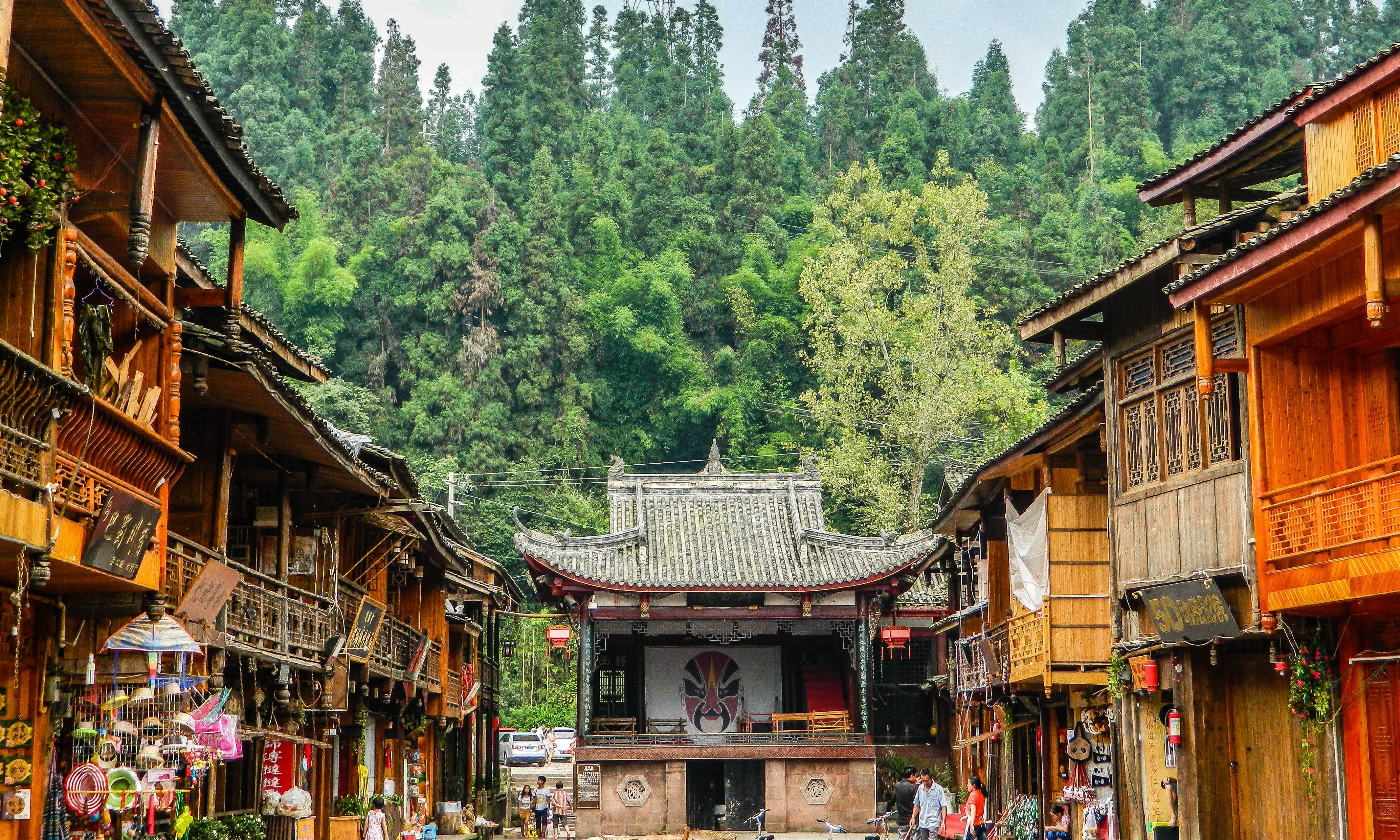 This is Rural Sichuan

By Amy McMahonSeptember 9, 2019Asia
No Comments

While volunteering among earthquake survivors in rural Sichuan, our writer discovers that the “real” China is both beautiful and confronting.

“Lushan is a nice village. Maybe one million,” our interpreter, Jing, told us as we walked on the outskirts of a little corner of the Sichuan province.

I tripped on my sandal. “A million people? In a village?”

Before coming here, I’d been living in the Denver metro area, which is one million itself, and it had seemed a giant city to this Montana girl.

“It’s very poor here,” Jing continued after my sandal had been readjusted. “You can see why the earthquake was so hard on them.”

We were in Lushan for an internship to (ideally) provide mental health assistance to earthquake survivors. I had been expecting to be deep in rural China—and the one-million-strong village was throwing me off.

Our first day in Lushan, I noticed that it did, indeed, have a rural air—a million people or not. Lushan is ringed with mountains, laced with rice terraces, and has dusty streets made of dirt more often than not. There was little hot water—just at a local, fancier hotel—and electricity would disappear for large chunks of time. The weather was dramatic—landslides, intense storms, floods, earthquakes. Due to the most recent earthquake, many people had lost their homes and were living in tents. We were going to work within this tent city starting the next day.

That first day, though, we were hiking into the hills. I never knew the purpose, exactly, but we seemed to be paying visits to people living back in the countryside. We left the main roads and started up the steep path, shoddily paved in black, crumbling asphalt and tending towards the slippery. Every now and then, we came to dwellings in various stages of disrepair. One place, no more than a tent, had a group of adorable children staring wide-eyed at us.

“They’ve never seen foreigners,” Jing informed us. “They’ve only seen white people on television.” She looked at me. “They are shocked by your pale face and eyes.”

I waved and smiled at the kids because that seemed the thing to do. Some of the little ones giggled, covering their mouths with their hands, their dark eyes dancing. Some ran away on fast feet, some gaped at me, their eyes wide with shock.

I, distracted by the children, suddenly ran into Jing’s back. The rest of our group, which, besides our interpreter and my two colleagues from our university, Jess and Kayla, included Chinese volunteers from all over the country and the professor that had escorted us from Beijing, had all stopped. The young guy who was leading us was speaking, his face solemn as always, his dark hair spiky from his hands. I wondered why he seemed to be in charge—he seemed young, and I’d been introduced to the boss man earlier that day.

I looked at Jing, wondering if she would explain, but she didn’t. This marked one of the many, many times in China where I would be in the dark. The man spoke a bit longer, and then we continued on.

The hike was steep, and the pavement of the path was full of puddles and slippery spots. We passed another house—if you can call it a house with only three walls—and I noticed a dog. To my delight, a few puppies ran out from behind their mother, as curious as the children a few minutes earlier. One puppy, in particular, was a bit braver and ran up to me. It was so cute I couldn’t resist—although I had been warned over and over again about the dangers of petting local dogs.

“It’s so dirty,” Jing said, wrinkling her nose behind her glasses. Its soft puppy fur was matted with mud, it was true. I didn’t care—it was running around in ecstasy, desperate for more rubs.

The brooding, mysterious man who seemed to be leading the group called something back to us as my visit to the puppies had caused us to fall behind.

“We must go on,” Jing said. “Chang says that everyone wants to see the foreigners.” That was the first time she said Chang’s name.

I reluctantly pulled myself away from the dog and followed the group. I glanced back a few times to see the puppy gamboling behind us, his black fur tipped with brown mud. Eventually, we moved too far away, and the puppy ran back home.

We were soon surrounded by rice paddies, and I had one of those surreal moments that are unique to traveling. All around me hills were terraced, lush with tall, green grass growing straight out of the water, it seemed, and the vista of still-greener hills and trees, as far as the eye could see.

I often told myself that during my two months in China, whether I was in the village of Lushan, the town of Ya’an, or the capital city, Beijing.

Sometimes I didn’t really believe it, which is why I said it. It helped me gain some perspective and anchored me—this is China. It’s so foreign, but you’ve heard of this place. It’s China.

Other times, I said it in awe. In the moments where it was the glorious, ancient, gorgeous China I had imagined. When I viewed the Summer Palace. When I heard drums beating at the Temple of Heaven. When I hiked to see a panda kindergarten. When rice terraces spread out, as far as I could see.

I found myself saying it, even when China broke my heart. When I saw those dirty little puppies. When I saw children living crowded in tents. When I saw families staying in their unsafe houses because it was their home. When I saw government officials forcing people from tents into trailers that reeked of chemicals, trailers that were too small for these families. When I met members of various rescue organizations in nearby Ya’an attempting to reach the survivors in Lushan.

We continued to walk through the rice paddies and eventually stopped at a house. It was small, muddy, and nearly hidden in the thick brush. An older man answered the door, and Chang began to talk to him.

After some prodding from Jess, Jing reluctantly translated.

“Chang is asking him how he is coping,” she told us. “He likes to check up on him and others around here.”

“Why are we here for this? What is our purpose?” Jess asked, always concerned we weren’t working enough.

“Because you are new, different. People are more likely to open the door if they see strange white girls.”

“So we’re props?” Kayla whispered to Jess and I as Jing went back to listening.

“It seems like Chang is doing most of the talking,” I said to Jing, a few minutes later.

“Yes, he is telling the man about his time in the army.”

“The army?” I asked, confused. “What does that have to do with anything?”

“Chang still has nightmares from his time in the army,” Jing said, matter-of-factly. “He is telling the old man about them so the old man can tell Chang if he is having them, too.”

I was stunned by this. I studied Chang, tall and brooding, his athletic grace evident, his voice calm. I’d had very little interaction with him so far.

“I’m surprised he can talk about it,” I murmured, mostly to myself.

We visited a few more people that day and commenced our work in Lushan over the next month or so. We ended up teaching English lessons to children—it was the best for attendance, Jing told us.

“They want their children to learn English very badly. They will come if they think you are teaching English.”

So we taught English. And we taught some coping mechanisms to the kids, and sometimes adults, and sometimes the other volunteers. I don’t know if anyone in China remembers me and what we tried to do—but I remember them.

I remember Chang, pouring out his nightmares to help someone else. Who once retrieved my camera when I dropped it off a steep hill. Who always made sure I had the beer I liked. Who I hardly ever had direct conversation with, such was the language barrier.

I remember Jing, who tried hard to translate. The little girl who gave me a picture of herself, and of her baby brother, when we said goodbye. Of the little boy we jokingly called Dennis, who had a knack for trouble, along with an impish grin. I remember the group of young twenty-somethings volunteering their time to help those in their country, who shared a tiny apartment. I remember cooking them an “American feast” on the 4th of July and how Chang, with one of his rare smiles, ate four burgers.

Before going to China, I mistakenly believed that the China of my imagination would be right on the surface.

Instead, you have to hunt for it. China is in the midst of an Industrial Revolution of sorts, and the China you expect to see has been buried under this progress. It’s not impossible to find–I found it on the Great Wall in a thunderstorm, in a small mountain village, at an old temple in Beijing. The China of my mind and the China in reality left me intrigued, and confused. Even though I was ready to leave when the time came, a part of me was still left wanting more. As Jing informed me, “Don’t worry. You can come back. China will still be here, even when you’re an old lady.”

Amy McMahon has lived all over the world, teaching and telling stories along the way. She is currently based in Montana, where she lives with her husband and baby daughter.