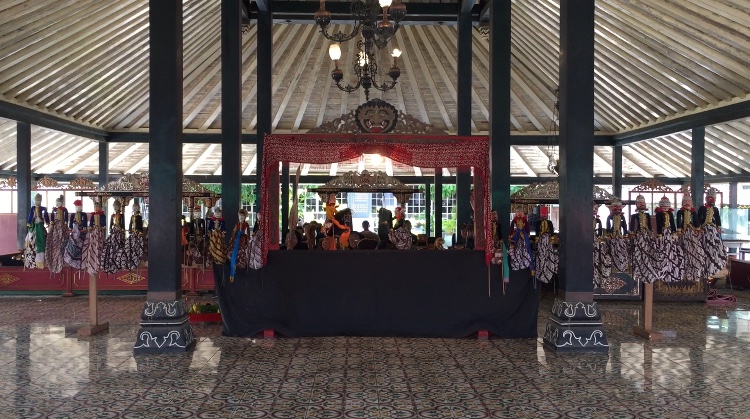 By Tia FerhanaSeptember 26, 2019Asia
No Comments

An Indonesian writer travels to Java’s last provincial monarchy and speaks with a servant of the royal family.

On Christmas Day, I went with my parents and little sister to Yogyakarta, known as the cultural capital of Indonesia. Tourists flock here from across Indonesia and overseas to experience “traditional” life unspoiled by modern technology or comforts. Its own independent state for many years, the Javanese territory is now the only part of Indonesia that is still ruled by a monarchy: the Yogyakarta Sultanate. King Hamengkubuwono X has sat on the throne since 1989.

We spent our first day wandering around the Keraton area, where most of the palaces are located. Our chosen transportation was a cycle rickshaw, locally known as becak. I’d visited before, but I was around 12 years old at the time, too young then to care about the historical and cultural values this area represents.

We made our way into the palace area and paid 0.72 cents each for the entrance fee. Once we were in, we were greeted with the loud noise of a man narrating a story in Javanese while various traditional musical instruments were playing in the background. It was the afternoon Wayang Performance. Wayang is a Javanese dramatic representation of mythological events presented through a puppet show or by human dancers. We stopped by and watched for a little bit as it had become too crowded for our comfort. Before we could get in further, an Abdi Dalem, a servant of Yogyakarta’s royal family, offered us a tour. We said yes.

The tour was interesting, but the real story began when we visited the nearby Carriage Museum. As expected, our guide explained to us each of the carriages and their functions in the different royal ceremonies. We saw the carriage that Princess Diana and Prince Charles were taken in when they visited. But it was the funeral carriage that got my attention. This carriage stood out because of its clean, white paint with gold engravings and spacious interior. Prior to knowing its purpose, a tourist who shared the tour with us expressed her fascination towards this carriage because it stands out as the most elegant against the others that we had already seen. She soon changed her mind when she found out what it was for. When the Abdi Dalem talked to us about this carriage, we discovered the depths of his dedication to the royal family.

“I was assigned to bury one of the royal family members. He was taken in this carriage, and we walked barefoot for six hours following the carriage, from Keraton to Imogiri Cemetery,” he said in Javanese.

“It’s not supposed to be that far, but as a part of the funeral process, we had to walk slowly following a rhythm. That’s why it took six hours.”

“After we finished the funeral process, I came home with blisters all over my feet because of having to endure the heat from the asphalt for six hours. I can’t walk for three days after the funeral.”

I thought to myself, there has to be some kind of reward, otherwise why would anyone be ok with this? It turned out that they do get some kind of payment, but not the kind I had imagined..

$1.10 is their salary, but it’s difficult to consider this a financial reward since it hardly pays for their family needs. Before we got the chance to feel sorry for him, he continued: “But we are happy and sincere in serving the royal family. This job gives us pride.” He made it clear to us that it was his choice, and he knew what he had gotten himself into from the very beginning.

“Isn’t it hard to financially take care of your family?”

“Of course it’s difficult, but the key is to have a peace of mind and sincerity. So you don’t think about that anymore.”

Part of the training to be an Abdi Dalem is nurturing their ability to be sincere and grateful towards any situation they are facing in their life. Their willingness to work without any financial reward is the product of this training. But their willingness to embark on this journey in the first place is what amazed me.

On the last part of our tour, he took us to a painting shop run by the Abdi Dalem and their families. He explained the different paintings and their meanings. We ended up buying one. After we purchased the painting, he said, “This money will go towards paying for the Abdi Dalem children’s tuition fees.”

We purchased the Javanese Ramayana painting. It was made with the traditional batik process. Locals believe that if you hang it on the wall of your living room, it will bring happiness to your family, especially for the husband and wife relationship. These beliefs are what make Yogyakarta unique. Their routines and decisions remain influenced by traditional and historical values that they have successfully preserved throughout the years. Some are uncontaminated by the modern lifestyle presented to them. Yogyakarta is one of the cities in Indonesia that remains true to its traditions and cultures.

“Who made all these?” I asked.

“These are all made by Abdi Dalems’ wives and other family members.”

In a traditional Indonesian society, men are expected to be the breadwinner, but this time the roles were reversed. Men still contribute in that they bring pride to the family name, but women take on the role of supporting the family financially. They are the ones with the skills to produce cultural pieces, such as the paintings, to be sold to tourists.

“Is it possible to resign from being an Abdi Dalem?” another tourist asked.

“You can, but I never knew anyone who has resigned. We’re not here for the money. This job gives us and our family tremendous pride.” He began to be a little defensive with his answer. He wanted to convince us that he had no regrets and that this is the best job he could have.

Before we parted, we thanked him for the tour. He asked politely, “Are you willing to give me a tip?” So we did, not only because he was an amazing tour guide, but also because we were aware that these tips would help to pay for his family’s survival. He thanked us for the tip and made his way back to the palace area to find other tourists to guide.

Tia Ferhana was born and raised in Jakarta. She moved with her family to the United Kingdom at the age of 16 and has since returned home to Indonesia where she is traveling to discover the traditional and cultural life of her homeland.