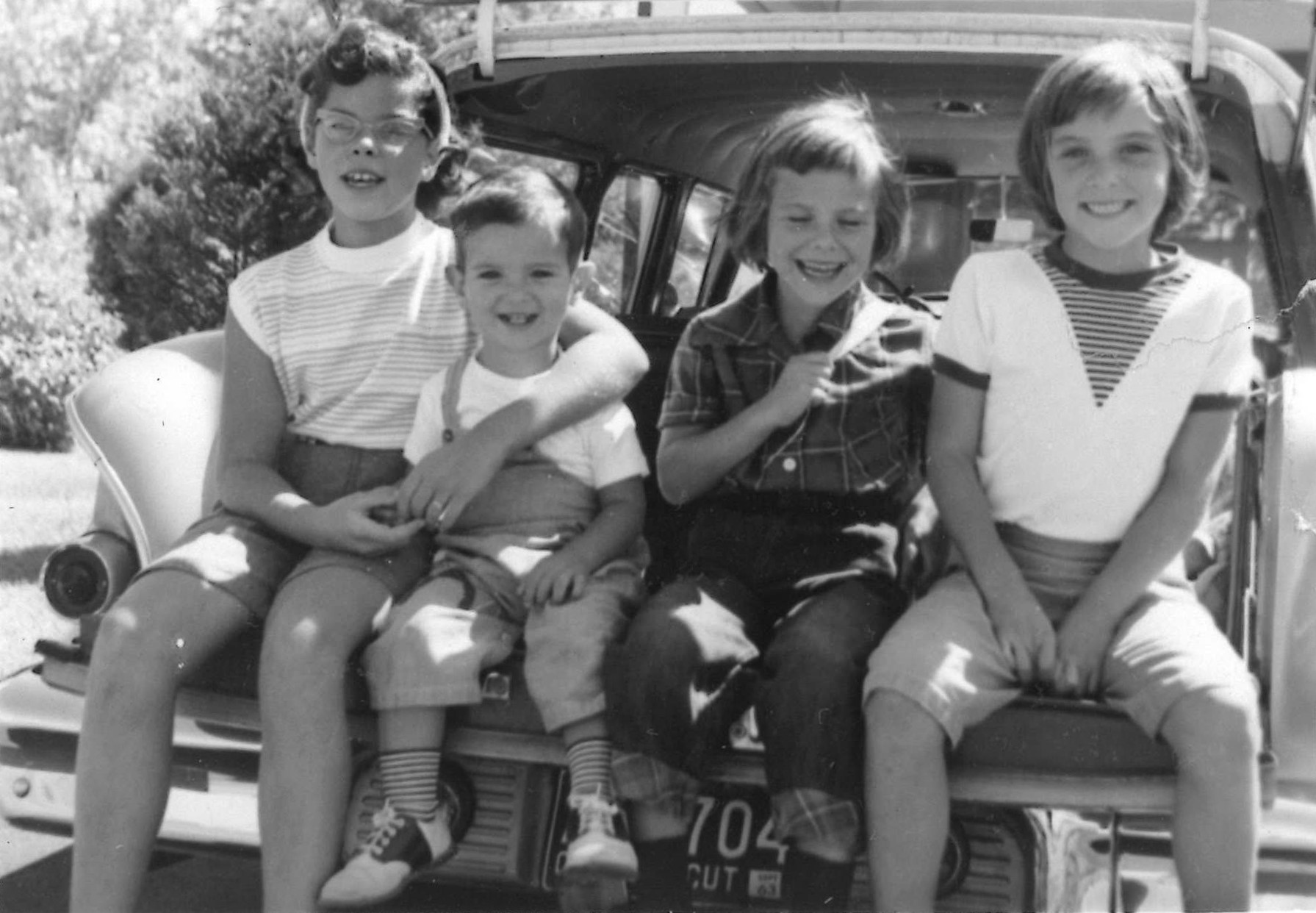 Elegy for the Tappan Zee

While remembering the drives back and forth over a whimsically named bridge, a writer reflects on the ways it connected not only two counties, but also the moments in her life.

The Tappan Zee Bridge and I grew up together. Three years before I was born, 1955 Chevys and Country Squires began speeding over its new, cantilever spans. The bridge was never meant to last more than 50 years because money and materials were tight after the Korean War, but until late 2018, Priuses and Camrys hummed over this three-mile stretch of the Hudson River.

You didn’t so much cross the bridge as enter its latticed girders, a baby boomer’s dream of a giant Erector Set, anchored by long up-sweeps to the banks of the river. In the ‘60s and ‘70s, my family would take the bridge from our home in Connecticut to visit cousins in Baltimore or the museums in DC. I’d try not to blink as I watched the steel network whiz by and caught a glimpse of the little white lighthouse on the east side of the river and a flash of the Empire State Building to the south. The car tires echoed on the spans, kerthump-kerthump.

Place names around the Tappan Zee were magic: The Palisades sounded like a fantastical amusement park; Bear Mountain, the home of ogres and heroines; Tarrytown, an eponymous place of porches and rocking chairs. And the train that I saw “puffing along” went from The City, past the legendary Sleepy Hollow, through the explorers’ wild territory, and finally, Up-State, that elysian borscht belt where my grandparents forever picnic in a sepia meadow.

In recent decades, I’d drive north from my home in Philadelphia, follow the life-threatening New Jersey Turnpike and the claustrophobia-inducing Garden State Parkway, and then a few miles past the border into New York State the sky opened and the Hudson spread to the horizons; the brown cliffs of the Palisades loomed; and the bridge rose, silvery and intricate.

On our way to holidays and vacations, my children and I took the Tappan Zee to avoid the George Washington Bridge’s glacial pace. Besides, Tappan Zee, named for the Tappan Indians of the Lenape tribe and the Dutch word for “sea,” is fun to say. When the children were young, we’d proclaim in some quirky medley accent, “Tap on zee bridge,” as if we could touch it like a child’s play-set. Rolling onto the first span, we’d belt out Pete Seeger’s anthem to the Hudson, “Sailin’ Up, Sailin’ Down,” with one of us doing the call, the others the response — up/down, down/up, fish/hell, hell/fish — and the children shouting “hell” at the crown of the bridge.

One of the pleasures of crossing was to glance and see what was visible in the distance. If it was clear to the south, the silver-grey silhouette of the Chrysler Building, sometimes a glint of a window; if it was misty, a wash of skyline, maybe a spire poking through the clouds. You needed the perfect angle to get a full view of New York City, and even then it was a shooting star’s worth of time in peripheral vision.

To the north of the bridge, where the river bends, as I’d tell the children, we could imagine a stretch of whistle-stop towns and old Hyde Park with its smiling, pearl-adorned Mrs. Roosevelt and her cigar-puffing husband. Sometimes I viewed the steep Palisades through the lens of the Hudson River School’s romantic painterly vision.

But the bridge was not without its shadows. The Wednesday of Thanksgiving week in 2001, the sign for the bridge filled me with dread. My son was a toddler, my daughter, a baby. At the crown, I glanced south and saw nothing — just the gaping wound of sky where the Twin Towers had been.

A private ritual took hold. Without a word, I’d regard the empty space above the city each time we crossed, as if visiting a grave for a yahrzeit. Even when the new fraternal-twin towers emerged from the skyline, I still nodded to the old towers’ ghosts, which glimmered in the clouds.

But there was grace from the sweep of the bridge. Sailboats leaned into the wind, barges plowed upriver. In severe winters, the Hudson could freeze in great chunks of ice that bumped against each another, waves lapping them along like in the Arctic.

The bridge still beckoned through the summer of 2017, but it soon would be gone, replaced by a sturdy leviathan with a planned 100-year lifespan.

My children and I watched enormous pylons rise on the north side for the new bridge. Cranes, one on top of the other, were giant toys in Crayola-red, blue, and yellow. On-river construction sites floated like dystopian islands with vehicles and tall stacks of beams, girders, and brightly colored shipping containers. Magnificent concrete and steel pieces were layered to form the bridge, and while fascinated by the engineering, we were wistful to see the old bridge and its homonymic name go. Sometimes, my teenage children indulged me with an ironic chorus of the Pete Seeger song.

The little white lighthouse is still there. It defied the suburbs and General Motors when they pushed the land to its stone base in the last century, although the beacon was eclipsed in 1965 by lights on the Tappan Zee. At the George Washington Bridge, Jeffrey’s Hook Lighthouse was long ago enshrined in the book The Little Red Lighthouse and the Great Gray Bridge (1942). That story was replaying here at Tarrytown as the new bridge reared its concrete-scaled back, a hydra encroaching upon the white lighthouse.

February 2016, no holiday, no children in the car, just me hoping for light traffic as I drove north for my increasingly regular visits to my aging parents. My thoughts on the bridge were crowded by anxiety as I planned a strategy for convincing my 87-year-old mother she could no longer care, alone, for my father, who had Parkinson’s.

On the way back, my eighteen-year-old son was with me, returning from a choir conference in Boston. He did the crossword puzzle on his phone, asking me for some answers. I asked him to tell me what he saw from the bridge. I wanted that skyline, hovering like the Emerald City, “closer and prettier than ever,” to yield its promise of a new heart, and maybe some courage.

Yes, I can see the skyline, my son answered, and a barge. He turned back to his puzzle.

The next month, I crossed the bridge, sad and alone, driving south from my father’s funeral. Not even the radio, just the silent shell of my car, protecting me until I could scurry into the sanctuary of my house. I could not remember at all the drive north, only my children’s singing and playing music to keep me focused on the road. We didn’t talk; I’m sure I didn’t glance over the bridge.

On the first span heading south, a phrase from a Hebrew song popped to mind — “narrow bridge” — from a saying attributed to the Hasidic Rabbi Nachman of Breslav: “The whole world is a very narrow bridge, but the main thing to recall is not to be afraid.” Though the Tappan Zee was wide enough, my life felt shrunken, so I performed the quick ritual of taking in the panorama, and right away I was on the down-sweep to the other side of the Hudson, to New Jersey and Pennsylvania, and I coasted, the bridge carrying me with a fleeting sense of relief and solace, to the second half of the journey, away from my childhood town and my father’s grave, toward home.

Note: When this essay was completed, the Tappan Zee was still intact. By publication date, it was completely gone, replaced by the Gov. Mario M. Cuomo Bridge, a soaring, white harp of a bridge that thrums when you cross it. Perhaps my children’s children will someday hum along.

Many thanks to Noah H. Shipley for technical assistance.

Wendy Horwitz’s essays, editorials, and reviews have appeared in Afterimage, Neurology, The New York Times, The Philadelphia Inquirer, and through McClatchey-Tribune News Service, among other publications. She currently lives, writes, and teaches English and Health Humanities in Philadelphia, PA (USA).