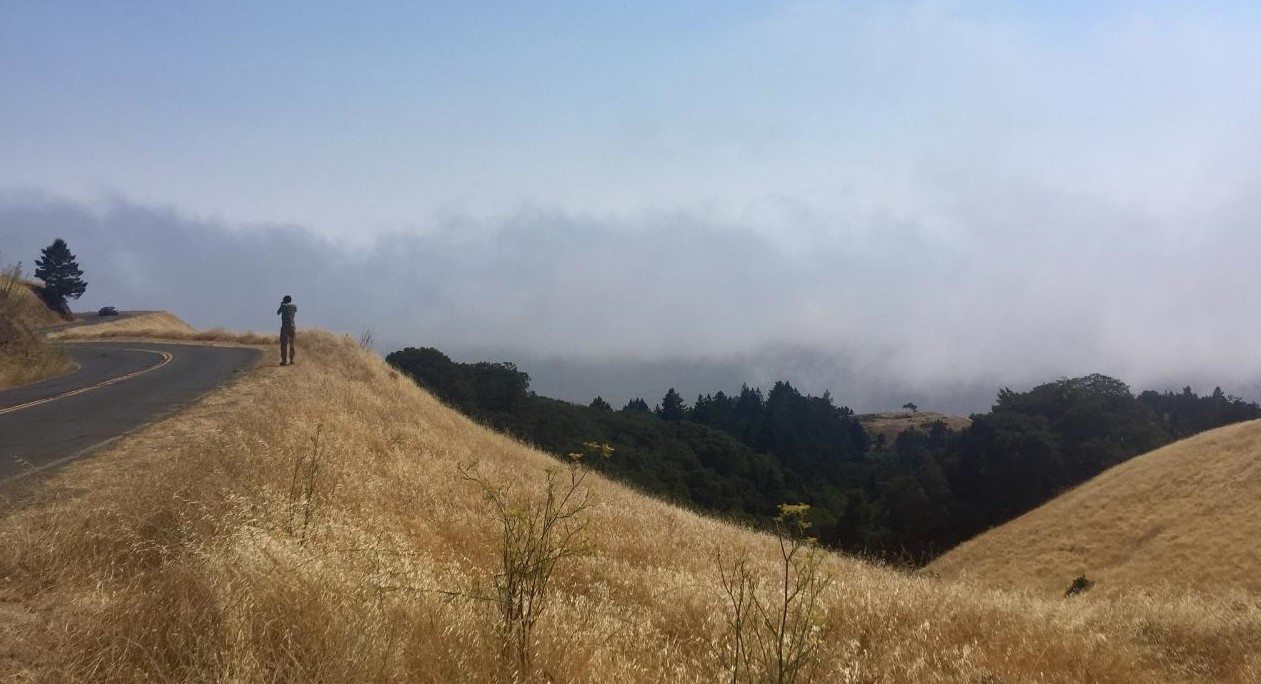 A hitchhiker makes an unexpected connection as she thumbs a ride with a road weary trucker.

The big rig pulled over to the side of the road and screeched to a stop. The driver looked down at me with a half-tired smile. I returned it with a face that expressed relief.

I figured he would welcome the company, someone to share random thoughts with as the miles rolled by; at the same time, I looked forward to a bit of chitchat to fill in the broadening gaps of loneliness.

“Where you headed?” he yelled down through the open window of the cab.

“Oh, as far as you’re going toward Sacramento.”

Desperation, fueled by hours of waiting roadside with my thumb raised, forced me to size the driver up with greater haste than usual. He had a friendly smile and a purposeful demeanor that seemed bereft of mischief, as if he was more interested in making his delivery or pickup on time than trying to take foolhardy advantage of an innocent damsel in distress. About 40-ish, he wore jeans, a button-down shirt, and a baseball cap. They were clean, and he was well shaven. I accepted the ride as welcome rescue from whatever dangers might accompany the advent of dusk and eventual nightfall.

He pushed a lever that popped open the passenger door.

Eyeing the entry with curiosity, I hesitated. I had never ridden in an 18-wheeler before, and the first of the three mini metal stairs was so high as to be a considerable challenge for my short legs to manage. As I swung my overloaded backpack across my left shoulder, I knit my brows with concern that I might fall backwards. I flicked a glance at the driver in hopes he’d notice and provide some assistance.

“Come on, little lady,” he shouted down at me. He spoke clearly but with a slight Midwestern, farm-country twang. “If you are out here hitchhiking by yourself and all, I’m certainly not gonna go out of my way to make it easy for you. You’ve proven you can get along by yourself. Now go ahead, get on in. I got places to be.” The voice was firm but kind.

I grabbed hold of a metal post on my right as I placed my foot on the first high step. The backpack jilted to one side, and for a split second I pictured my body reeling backward, my head hitting the curb and blood spilling out onto the pavement.

But I recovered, my muscles springing into action at his gentle prodding. A couple more steps and I was comfortably situated in the large passenger seat. The roomy floor space at my feet generously held my pack. It was good to be mobile again, and I was especially appreciative to have proven once again the trustworthiness of strangers.

I was also glad to be getting closer to my next destination, my hope being that each stop along my journey would clue me in to the secrets of living a life unshackled by what I perceived as a smothering suburban upbringing characterized by sharply defined roles, rules and expectations—none of which resonated with me as an adventurous 21-year-old in the 1970s who sought a more unstructured and carefree existence.

My only rules now were the rules of the road, even if I was making them up as I went along.

I did have one guiding desire on my trek. I wanted a life based on connection with others on a genuine elemental plane, a plane where educational credentials, economic status, and cultural differences didn’t matter, and where communication came from the heart.  At this moment, bobbing up and down to the bump and grind of the highway and the roar of the truck’s motor, it felt as elemental as it gets.

Buckled up and settled in, I looked around, impressed by the cab’s massive interior. Papers and a notebook and a crumpled windbreaker jacket were stashed snugly between us. The cab’s well-worn upholstery showed its age. A large map was shoved atop the dashboard, next to it a package of No-Doze. A half-open dopp kit revealed a toothbrush, toothpaste, and a razor. Empty, browned, Styrofoam coffee cups were strewn across the floor. An earthy but not unpleasant smell permeated the space. Sweat and fuel and exhaust fumes and corn chip crumbs mingled with the cardboard air-freshener hanging from the giant rear-view mirror.

The trucker’s big, burly arms gripped the giant steering wheel with ease. Beefy fingers clasped the gearshift. Confident and quiet, the driver allowed me, at first, to absorb the newness of it all. Viewing the road from this whole new height filled me with exhilaration. I felt like I could explore the whole world from up there.

Turning down the mumbling chatter of his CB radio, he asked me the usual questions—where I was from, why I had taken off, who my family was.

As we eased into conversation, I began to totally trust him. He spoke calmly and matter-of-factly and without pretense. He knew exactly where he was going. And when it comes down to it, I thought, aren’t these the two most fundamentally important qualities that any human being could possess—the ability to communicate and the positive motivation to achieve a goal? And isn’t this, in a way, what I was looking for on this wild new venture?

We spoke of family, of relatives we didn’t get along with, of jobs, of school, of childhood mishaps, of lifelong goals. He asked if my parents approved of what I was doing.

“No, but I call them every now and then to let them know where I am.”

“If I had a daughter like you, I’d be worried stiff. But you know what you’re doing. I can tell.”

Then, out of nowhere, with his eyes still on the road, in the same low-key, matter-of-fact manner, he asked, “Ever had sex with a trucker?”

A twinge of fear swept through my nerves. My brain went blank. I had never faced a situation like this before. There was no reference point, nothing to compare it to that might reassure me of a proper reaction, a response that would keep me safe.

Then these thoughts came to the fore, fighting for the winning position. On the one hand, I was his captive; I was at his mercy. On the other hand, I felt he was a good person. And anyway, if he had wanted to hurt me in any way, wouldn’t he have already tried?

I concluded that I’d better respond fast. Waiting for an answer, he might construe silence as some sort of consent.

“Well, just thought I’d ask. Ya know, I got a bed right here behind me.”

I shot a fervid glance over my shoulder. Sure enough, a crumpled pile of unwashed clothes sat atop a built-in cot covered in smooth, cream-colored sheets.

Uh-oh. Not cool. If I’d been a dog, my hind fur would have been sticking up in fear. But reassurance came quickly, salving my remaining worry.

The big rig chugged, and the miles rolled forward. After an hour or so, he pulled over at a truck stop—not just one of those plain old chain restaurants like Cracker Barrel or Shoney’s that you see all the time, but a genuine roadside diner designed for exclusive use by truckers.

“Ya hungry? How about a steak dinner? It’s on me.”

Nodding my head, I told him sure, that would be fine. Glad I did, too, because as I dug into the tough slab of meat, slashed through the canned green beans, and gulped down the mashed potatoes, I realized I had quite an appetite.

Back in the truck, we faced the next hundred or so miles chatting as if we were old friends.

“You been to college?” he asked.

“At least you tried it. There’s things I wish I’d tried, but I had a family to raise after my wife left me. It’s been tough, real tough. You watch yourself out here. Don’t ever forget that you’re someone’s kid, and someone loves you. I can tell.”

I was careful to restrain myself from conveying any sense of emotional interest, lest he interpret it as an invitation to try out his cot. However, his words did touch me.

He told me he’d be reaching his destination soon, and when I told him I’d be continuing along the highway, he spoke with a more parental air.

“Ya don’t want to be takin’ chances ridin’ with just anybody. I’ll radio in a buddy to come get ya at the next truck stop. I know somebody who’s usually headed this way ‘bout now.”

Quickly weighing my options, I figured it was safer than thumbing it at this late hour of the afternoon. Being stranded roadside alone at night had no appeal for me. I may have been making risky decisions, but I wasn’t about to make stupid ones.

“Umm, that sounds great. Thanks.”

Minutes after we pulled up to the truck stop, another trucker barreled alongside us. The driver tipped his cap and said, “Howdy. Nice to see you again. Where’s your young beaver passenger headed?”

After heaving the backpack onto my body once again, I cautiously went backwards down the cab’s steps, holding on tightly to anything that could be used as a grab bar to steady my balance.

Looking up at my new friend, I thanked him for his hospitality and the steak dinner.

“Ya take care, little lady.” And with a wink back at the cot, he grinned and said, “Next time.”

But as I waved goodbye, his grin transformed. The lighthearted conversation that we had shared had lifted his spirits, and now he looked sad, not about the refusal of sexual intimacy, but the ending of a true intimate connection, an opening of hearts between two complete strangers, fostered by a few hundred miles of open road.

I swear a slight mist glazed his eyes, and he shed a tear as he grabbed the steering wheel and roared back onto the road.

Ellen Berman is an Atlanta, Georgia, native with a long-time career as a copywriter, editor, and widely published journalist. She is currently writing a memoir based on hand-written diaries she kept while in her early 20s, of her hitchhiking and other reckless adventures that helped her spirit blossom as she discovered her truer and more authentic self.