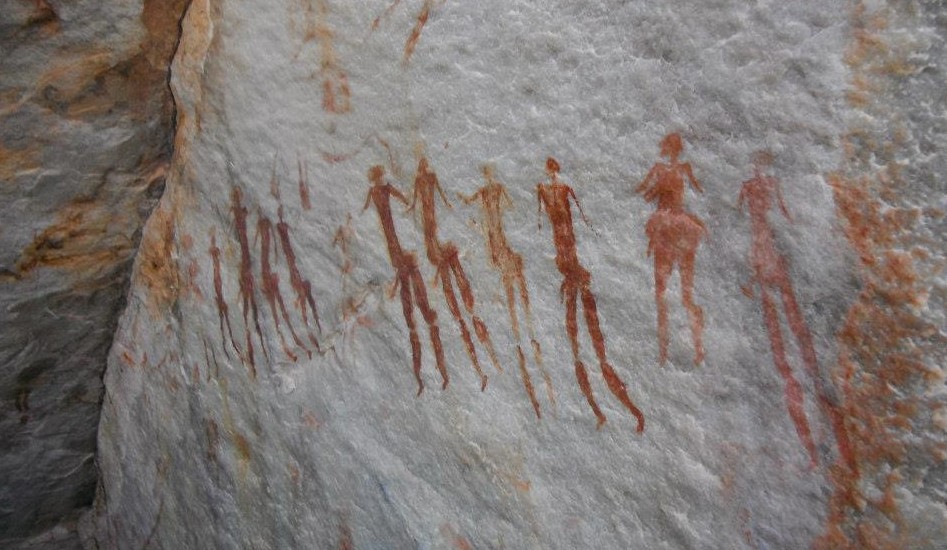 To Reach The Summit

During a trying hike in Mozambique, a traveler pushes through exhaustion and hunger in order to experience the joy of the summit.

The heat weighed down our clothes. It filled lungs and sat heavily in rucksacks. It looked red, like the clay dust kicked up from the path to hang in the air and settle on arms and legs. Hiking boots lay heavy footprints on the ground, compacting the earth and creating a careful path through the thick jungle of the Chimanimani mountains. The dense green of tangled vines and leaves crowded in above us, creating a luminous barrier from the hot sun as shades of green and yellow blossomed in the flora. Streams of light shifted patterns in a gaze already dappled by Malarone – the malaria drug known for its hallucinogenic side effects.

It hadn’t been long since the trees had parted onto a plateau, allowing a sweeping view of the lengthy path behind and ahead. My hiking group, filled with old school friends and new acquaintances, huddled into the curve of a rockface to take stock of the day and view the famous rock art of the region. I stood in awe, tracing my hand millimetres above the rockface. Drawn in by their storytelling, my fingers looped in the air in an attempt to understand the shapes in front of me. Here in the Earth’s cradle, the first people had wandered and left nothing but handprints to show us where and how. Painting earthy browns and reds into long-limbed stick figures and horned animals that moved across the rockface as if in a dance with one another. It was here, hundreds of years later, that I would first notice the word summit on the mountain hiking itinerary. Summit. To reach the highest point.

We began hacking through an even thicker undergrowth. Off to conquer nature. And nature kicked back. The incline steepened until roots became stairs and vines became handholds, but streams became beautiful oases where bottles, hats, and whole heads were dipped. Surrounded by phenomenal views and visible heat, we struggled upwards, under the weight of our rucksacks. Until long after legs had started burning and gone numb, past the point where the rumbling of bellies gave way to the heavy ache of hunger.

The sound of the jungle had been mostly silent, apart from the distant call of afternoon birds, until screams of

filled the air. Hikers dived for cover as our guides Anasa and Atieno beat the ground with sticks, like a mad game of dangerous-spider croquet. I stood, mouth slightly ajar, contemplating how close someone’s foot had been to that little ball of death. I stooped to tie my laces tighter and catch my breath.

Hunger became our new walking companion. One of the group stumbled into the dusty path and didn’t get back up. Being two days walk from the nearest building and with only the trees watching, a make-shift stretcher was fashioned from a tarp pulled tight over two sturdy logs. After an hour in the river, allowing ripples of water to wash away the heat, everyone was on their feet again, but daylight was disappearing.

By the time tents were being thrown down on a second rock ledge, orange was smudged across the sky. Over the ledge the world dropped into a sea of trees. The burbling of a waterfall rose up from the valley beneath, sunset captured in its depths, transforming icy water into thundering magma. Unfortunately, our surroundings were lost on downcast eyes. With heads buried in a campfire, a meager onion stew, and then our cramped tents, moods were dampened and the great battle to overcome nature became a civil war.

“Fuck you and your toothpaste.”

Settling down to sleep was a living analogy of trying to fit a square peg into the curves of the environment. Trying to fit three grown adults side-by-side comfortably into the straight edges of a tent perched on uneven ground proved to be futile. With a rock in my lower back and a spiteful elbow wedged in my side, I stared down at my miserable zip-on-zip-off trousers—specifically purchased to “make hiking a breeze”—and tried to figure out where things had all gone so wrong.

Five days earlier I had stood in the middle of a Mozambican market, which seemed to have a location rather than a name, trying to figure out where best to pick up supplies for the long trek ahead. Without any obvious order, the stalls grew out of the ground on wooden limbs. Old tree trunks combined with baskets displayed countless fruits and vegetables. Their colours blossomed through the red dust that coated everything – making teeth seem whiter and smiles brighter.

People called out. Welcoming me with dark purple berries and something that looked like a split open tennis ball with orange segments that burst in the mouth. My first introduction to Mozambican food was wonderful but confusing, and supplies were chosen based mainly on recognition.

In the morning when the local guides cut up roots to eat, everyone was soon chatting and doing the same. Anasa cut through tough brown roots and demonstrated the white, edible, and chewy inside. Bitter, still tasting of earth but full of nourishment, they were passed from hand to hand.

Emerging onto a Martian terrain of sloping shingles, the real climb began. Showing us the different ways of hearing, Atieno followed the tinkling of water (hardly distinguishable from the clattering of slate underfoot) to the source of an underground stream. Hidden and yet running coolly, emerging between two rocks.

Boots, indistinguishable from the earth they tread, filled up all thought, pushing onwards until the summit was reached.

The highest point, made obvious by a triumphant, square, standing stone, stood on the edge of the earth as if floating amongst the sky. The view from the top was nothing but infinite nature. Turning in a circle, all the way around, Gaia wore a dress of white. The feathery clouds of her skirt billowed out across the horizon beneath, punctured by other lower peaks.

A chocolate bar saved for the top tasted euphoric. A cooling breeze dipped over rocks to the curves of outstretched arms that tingled with lactic acid and success. More than one person cried. With heads still foggy with the hard climb up, friends folded into the arms of friends. Comforting. Celebrating. Limbs and emotions intertwined. I could no longer tell where mine ended and another’s began. It was for all of us. Our victory. Our elation. I let it fill me up. All the empty spaces, the aching spots. Rising up from raw toes until it overflowed into smiles, woops, and laughter echoing out into the world. And suddenly I was dancing.

Bethan T. Vickers has spent time in 70+ countries to date, with a year and half spent in China, visiting nearly every province. She has worked as a Community Project and Volunteer Coordinator for various charities in Beijing, as well as working on projects in Mozambique and eSwatini. She believes one of the best ways to experience a culture is through food and people.