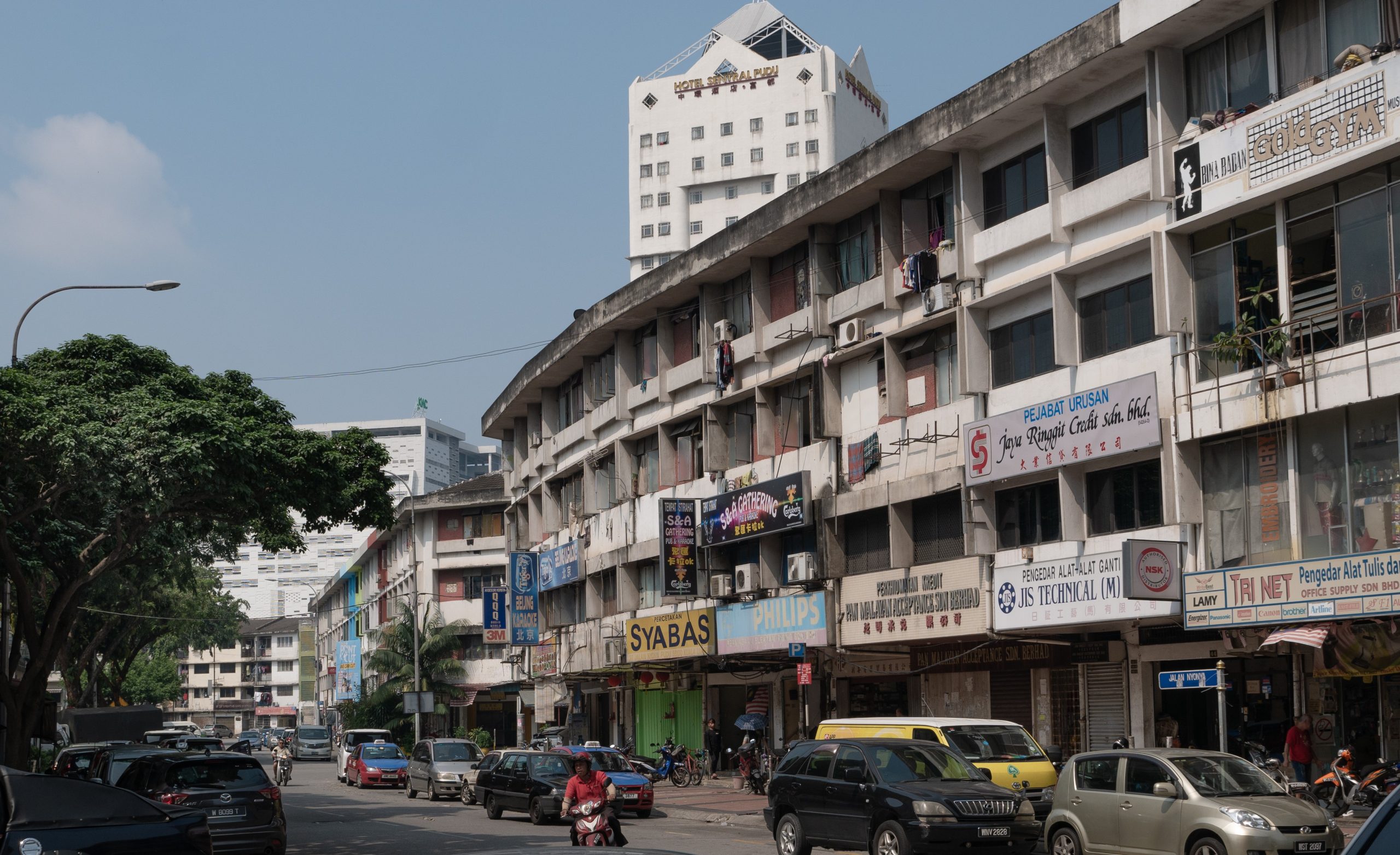 Overwhelmed by the noise and chaos of Kuala Lumpur, a novice traveler must decide whether to push on with her journey, or retreat to the familiar. This story forms part of our “How Travel Changed Me” series.

Stepping outside my hotel in the Pudu district of Kuala Lumpur shortly after arrival, my senses were all immediately overwhelmed: I could feel the humidity clinging to my skin, smell the unpleasant mingling of pollution and discarded waste, hear the startling racket of traffic plummeting down the main road. There seemed to be people everywhere, filling the side streets as they marched past me with purpose or sat outside at plastic tables, happily chewing or slurping away beside buildings that had seen better days. Someone had parked their car right up on the pavement, and I had to weave around it to continue down the road. I felt surrounded by chaos.

If I had been there on my own, I would have remained rooted to the spot outside the hotel. Fortunately, my partner Chris was a more experienced traveler. Taking my hand, he led me down side streets and through the crowds while I followed in a daze. He eventually stopped outside a large, single-story building, the whole front of which was completely open, revealing a brightly lit interior filled with people eating at tables.

“Let’s get something to eat,” Chris said. I can’t remember if I responded, only that I was led inside and found myself sitting on a plastic chair at a plastic table. I perched uncomfortably on the edge of my seat, arms crossed, alternating between staring at the floor tiles and the bright white glare of the overhead bulbs.

A woman wandered over, and Chris ordered some food. “Do you want anything?” he asked me.

I agreed to order a juice, but then found myself staring at the ice cubes floating around in it, wondering if it was safe to consume. Chris evidently thought so, slurping away at his own drink beside me between forkfuls of fried rice. I started sipping with trepidation.

While the exact words never came to mind, there was a sense of “Have I done the right thing?” floating around in my head that night. The previous few months had not been easy for me. I wasn’t one to naturally embrace change and uncertainty, so quitting my unfulfilling job at a small suburban law firm in Sydney and setting off to travel the world for seven months had been stressful to say the least. The fact that my family and friends had openly expressed their concerns over my decision hadn’t helped either. I knew they doubted whether I would cope, and I was unable to disprove them. My longest holiday to that point had been a three-week tour around the United Kingdom, and I had never been to a country that wasn’t Western and English-speaking.

In retrospect, I’d been disoriented from the moment I stepped off the plane at Kuala Lumpur International Airport earlier that evening. Feeling like an overloaded pack animal beneath the weight of my two heavy, bulging backpacks, I maneuvered awkwardly through the throng of other passengers and tried to keep pace with Chris as he marched purposefully past several unofficial taxi drivers all touting for customers.

“You have to watch out for those other taxi drivers,” he explained as we reached the official taxi booths downstairs. “They don’t use meters and end up charging a fortune. They try to catch you before you get down here to the official booths.”

The idea that someone could scam me so publicly was alarming, and I felt grateful to be traveling with someone who was aware of these sorts of things. I subconsciously found myself standing a little closer to Chris as he made a booking at one of the booths.

We followed our driver to his taxi. It looked a little worse for wear and gave off a hint of cigarette smoke when I hopped into the back seat, but it was otherwise clean and comfortable.

After some initial conversation, I settled back into my seat, content to gaze silently out of my window at a sea of green palms that stretched off into the distance beside the highway. I was so transfixed by the unfamiliar landscape, that when Chris pointed to a couple of ugly office towers outside his window and joked that they were the famous Petronas Twin Towers, I responded as though he were being serious.

“Are you ok?” he asked, staring at me bewildered.

Having arrived at Pudu, I found myself missing that taxi. It had been so quiet in that back seat. I’d had space to relax and think, and to adjust gradually to the new sights emerging outside my window. Pudu gave no such allowance, stunning me with an immediate assault on the senses. I did my best to settle my thoughts as I sat contemplating my juice, poking at the sinister-looking ice cubes with my straw.

Once Chris had finished his meal, we left the brightly lit building behind to continue our hunt for a 7-Eleven. In what I assume was a desire for some sense of normality, I had decided upon arrival at our hotel that I desperately needed a cup of tea. Had I known what venturing out to buy tea bags and milk would entail, I probably would have insisted we not bother. We had bothered though, so I just had to hope we found a 7-Eleven as quickly as possible so I could scurry back to safety.

Thankfully, we soon found one. It was all I could do not to run back to the hotel with the milk and box of tea in hand. I made myself keep pace with Chris though, as he strolled beside me carrying a couple of large bottles of drinking water. Needing to buy drinking water? What was this place?

Finally, we arrived back at our hotel. I closed the door to our room behind me with a sigh of relief at the cool, quiet, dimly lit space I was entering. I made the tea, which inevitably didn’t justify the effort required to obtain its components, and then settled in beneath the crisp white sheets. I could finally relax, knowing I was safely hidden away from the anarchy outside.

I was awoken the next morning by the Islamic call to prayer, softly echoing around the room from a distant mosque as though it were willing me to start the day. I’d never heard it before, and for a moment I thought it was part of a dream. As the memories of the previous night came flooding back in an unforgiving wave, the daunting prospect of venturing back outside again shook me wide awake.

My first full day in Pudu proved a struggle as I sweated over a spicy curry for breakfast and then dragged myself for hours through the humid city smog and along cracked and infrequent pavements to go sightseeing. That afternoon back at our hotel, Chris slept while I lay beside him Googling pictures of the rolling green hills of the Cameron Highlands, the next stop on our trip. I felt a keen desire to escape the city and breathe some fresh air, and those pictures represented the light at the end of a stifling, chaotic tunnel. “Just hold on a little longer,” I told myself. “Things will get better.”

Thankfully, they did, though not in the way I had expected. Over the days that followed, the differences, which had seemed intimidating at first, gradually became interesting. I became used to seeing the dirt-tinged buildings, to trying local cuisines, and eating each meal at a plastic table surrounded by locals. I enjoyed the lack of other tourists and the feeling that I was seeing a side of the local culture most visitors didn’t. Most of all, I felt pride for overcoming my initial struggles. From this pride, an excitement and passion for authentic travel emerged that continues to shape how I travel. Looking back at my past self, so full of discomfort and uncertainty that first night in Pudu, I can respond with confidence: “Yes, you did the right thing.”

Nicole Banks has a passion for authentic travel and for documenting her travel experiences for others through writing and photography. She is a practicing lawyer based in Sydney, Australia, and makes the most of working 100% remotely to travel the world with her partner as much as possible. India and Japan are currently topping her lengthy "must-see" list.