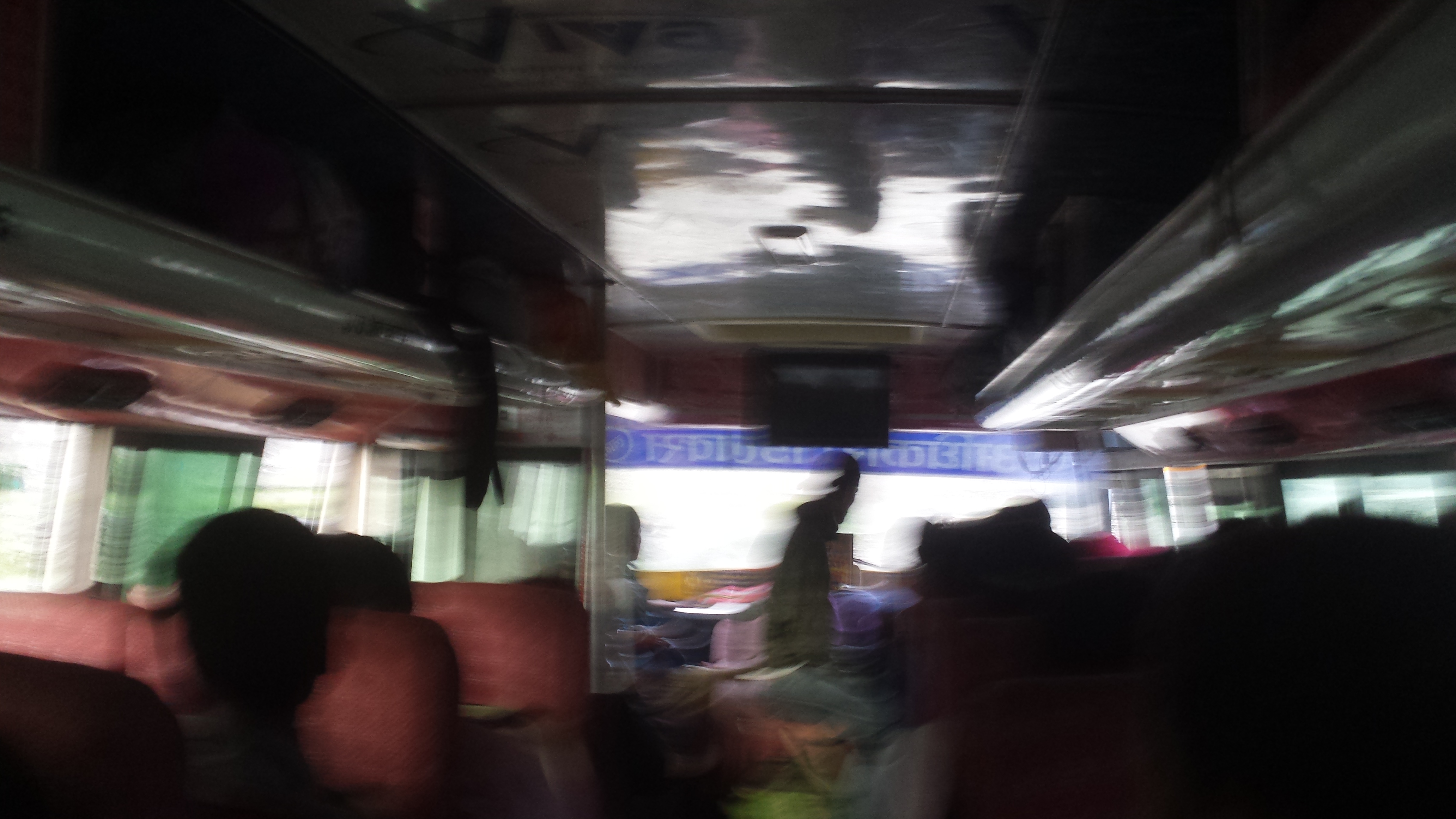 After a 9 day hike through the mountains of Western Nepal, Thomas Heaton was looking forward to a comfortable ride back to Pokhara. Then the local bus pulled up…

I peer over the dusty, faded seats to see the ticket man leaning out of the moving bus, looking at the passing countryside. Like a skydiver, ready to jump, the sky and occasional tree passes by quickly. He looks back, bouncing with the bus, and smiles at my white-faced terror. My friend turns, does too, tells the man next to him that I’m scared.

“Sure, I’m fucking scared, but I’m being completely reasonable,” I bleat.

They both laugh. My friend, in nervous understanding; the Nepali man, likely out of confusion. We reach the top of the valley towards Pokhara and the rain starts. Spitting on our windows, the cool air is welcome and the dust settles. But a slick road is a scary prospect. We’re about halfway to our destination on the Pokhara-Baglung Highway, the main access to the mountains. We’re leaving the mountainous area however, on the way to Pokhara. 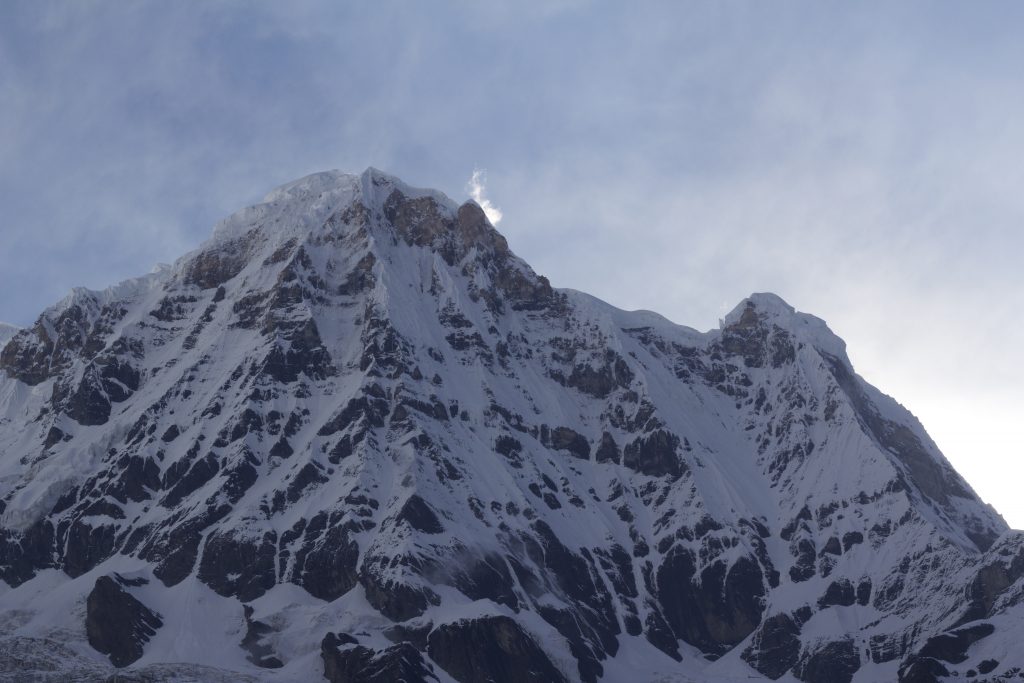 The views made it worthwhile… just! [Photo by Thomas Heaton]

Hours before, my eyes stung and my clothes were heavy from pouring sweat as we finished our nine day trek to Annapurna Base Camp and Mardi Himal in Western Nepal’s mountains. With the journey on foot finished, I looked forward to exchanging soft drinks and stiff mattresses for a hard drink. My walking buddies, exercise bunnies with no off switch, played bagh-chal with locals to pass the time. Flicking coins along a table, I had no interest entertaining anything other than cold beer and slumber. Their laughter and cheering barely registered, in my delirium, but the distant singing horn did.

Definitely local, the horn is like Nepal’s version of Dukes of Hazard’s General Lee. It was not our bus, I thought, so continued staring up the valley we conquered. I sipped what was left of my iodine-sanitised water.

The bus bounces and screeches to a halt almost 10 metres further than intended. A pot-bellied man jumps out before it comes skids to a halt. He approaches our guide – he tells me its our bus. My heart sinks.

Adorned with once bright designs and tributes to various idols, its livery had faded. This bus’s life is hard, like a water buffalo, donkey or yak.

I halfheartedly shove the pot-bellied man 300 Nepali Rupees (USD $3) and slope aboard the bus. Sidling and bumping down the aisle, we’re the only foreigners. I’m worried, given these buses are mass graves on wheels. On the way to Pokhara, days earlier, we saw several empty, with their fronts caved in, or, down cliffs. They’re notorious.

With a clank and a grind of the gears, we were on our bumpy way home. Annapurna’s serenity was gone, replaced by Nepal’s reality. With each pothole in the dirt road the suspension squeaked like a chew toy; with each village, the horn rang like a siren; with each stop, the brakes sound like nails on a chalk board. With every move, my knuckles whiten and my grip tightens on the seat in front.

Unknown to us, it would take another four hours to get up and over the valley between Nayapul and Pokhara. Contending with a long line of buses and jeeps, we waited for construction to stop on the road so we could proceed. We bought lukewarm, spicy-hot, samosas and chugged bottled water while we waited at a line of shops.

“How long until road opens, sir?” I ask, sidling up to the stout ticket man.

“30 minutes. They doing construction, road closed. 30 minutes, then we go.”

Time elapses slowly, and one hour later the bus belches before chugging up the hill through dust clouds and construction. The bus moves at angles it shouldn’t, I crack my head on the decorative air conditioning above with the more violent bumps.

Bump after bump, I get closer and closer to snapping. The last bump came with such violence the seat-back snaps on landing. I shift to the seat next to me. The seat flails next to me, like a red flag of what’s coming. I look out the window to spectacular scenery, but cliffs 100 metres down. There is no barrier between the bus and our certain death.

From out of the construction, the bus sets off at an alarming pace. The engine tortured, the bus rattles in a different way. We overpass on blind corners, my knuckles whiten and expletives come from my mouth unwillingly.

With drops of rain hitting my face, as the bus descends the hill towards Pokhara, the city reveals itself. Feeling safer from the will of the bus driver, I’m heartened by the sight of the city. I bet there’s cold beer there, and soft mattresses. I bet there’s hot showers too.

Unknown to me, I still have to suffer the river bed doubling as a road – a few more cracks to the head – and a seemingly drunk taxi driver. But what is fun, if it’s not secondary? And, what is comfort if we don’t know the contrary?