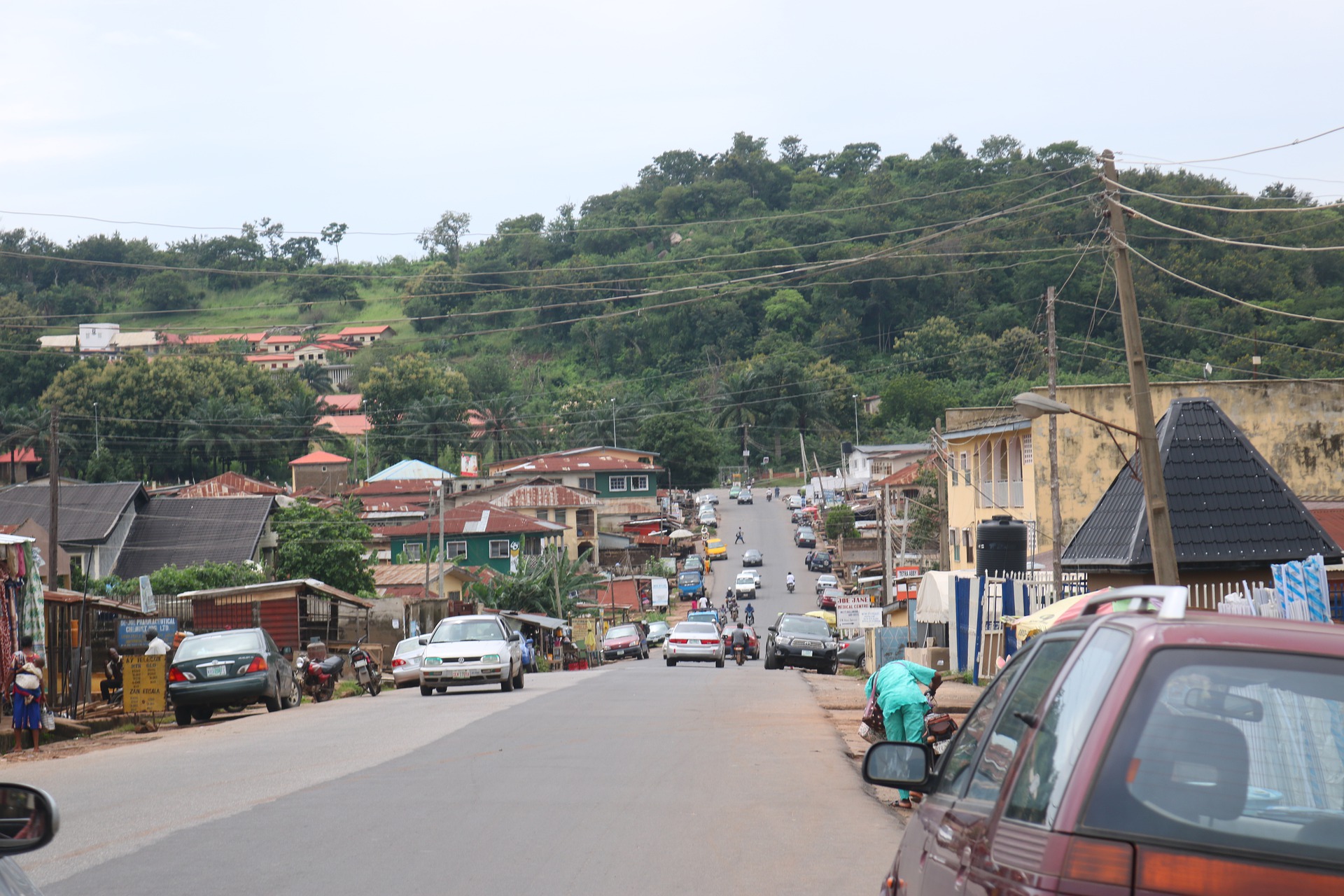 An Unexpected Friendship on a Bus in Nigeria

During an uncertain bus journey through Nigeria, a local traveler overcomes first impressions to see the real story behind those she meets.

The harsh harmattan wind blew with force, pulling with it powdery dust and dirt that covered any surface on its way. The lips of a man that just joined the queue bled, and his face flaked. My legs ached after standing for hours under the hot, dry heat of the blazing sun. I adjusted my backpack, wishing the queue would start moving.

My phone rang. It was Mama.

“Where are you now?”

“That means you will miss your brother’s wedding tomorrow. Please don’t do night journey. Go back home.”

The concern and fear of danger in her voice bothered me.

It was 2pm already. I had spent close to 5 hours at the bank just to withdraw my hard-earned money.

At about 3:33 pm, a man with haggard hair and a tattered caftan appeared  with a POS (point of sale) from nowhere. At first, I refused to withdraw from the man’s POS.

Peace Park was filled with tired and grumpy passengers.

“Is there no other bus loading today?” I asked a fair-skinned man in his late twenties, standing close to a very chatty woman and her children. His eyes swept from my head to toe, then turned the other way without saying a word to me.

That he was handsome didn’t give him the right to ignore me.

Yes, a well-built body graced with a fine face: thick brows, a straight nose, and a pink lips with an elongated Adam’s apple. “He is beautiful!” I admitted secretly.

Yet, I hated him. I hated the fact that he was a backyard snob, considering himself too important to associate with others. At that moment, I concluded he was not my type.

“Fine girl, another bus is coming, but it’s for the night journey,” the chatty woman told me.

The snob glanced at me, perhaps to check if I really was a fine girl. My eyes locked with his, and he looked away embarrassed. Maybe he found me not just beautiful but attractive.

“Oh! Thank you, Ma,” I said, making sure I dragged the “oh” in a singsong manner. The snob glared at me.

“I’m Uzondu. I live in Jalingo with my husband and children.”

“Oh, really?” I asked, tugging the strands of my weave-on behind my ear.

“For 10 years we have not gone for Christmas holidays  because we were scared of juju done in our village.”

The sound of juju, an object believed to have been infused with magical powers and used as a charm or amulet in West Africa, made my stomach twist, and a hard knot formed in my throat. It made me remember the story of family of five that got poisoned in the village after returning from Christmas holidays.

“Driver, please take it easy,” a plump and classy lady in a black coat shouted.

“Life has no duplicate biko.”

The statement “life has no duplicate” stirred uncontrollable argument in the bus. Some supported the driver to fire off while others dissuaded him.

Almost everyone in the vehicle talked except myself, the snob sitting to my right, and a cute guy to my left.

Suddenly, a peaceful  silence enveloped the vehicle as though everyone had finally agreed on one unifying thing – the driver should drive as he wished. The air was extremely cold and crispy, soothing every part of my fragile body. A while after, a coarse voice split through the quietness.

I knew that voice. I recognized it.

“Driver, don’t mind her. This is a very dangerous place. Do you want to get us in trouble?” an elderly man retorted harshly.

“Please, my child wants to pee.”

“Let her pee there,” the driver snapped.

“I can only stop you at Zakibiam.”

Immediately, our bus swerved, leaving it’s lane to hop into another. My stomach churned, my heart stopped beating, and the snob clutched my right hand.  The passengers shouted in fear. The fear of accident, the fear that we might never reach our destination safely or get to see our loved ones as planned. Yet, the greatest fear was the fear of the end. We all heaved. A heave of relief.

Hauling and cursing of different weight were heard. Some cursed the Dangote truck that almost collided with our bus. A few others blamed the chatty woman, Mrs. Uzondu.

My cute neighbor stooped and whispered into my ear, “Thank God, thank God.” I could hear his heart pounding and the force of his breath, warm on my cheek.

I glared at the backyard snob; he was panting as well.

“Where are we?” I asked my cute neighbor.

I and my cute neighbor started talking, as though we had known each other for ages.

At Zakibiam, our bus pulled up in front of a small restaurant, and passengers rushed out to ease themselves.

There and then, I remembered the chatty woman who said her child wanted to pee. I imagined her child peeing inside the bus and the urine smearing on people’s baggage.

“What are you thinking about?”

I looked up, surprised to see the snob standing in front of me, his hands dipped into his blue cardigan pocket.

I, the snob, and my cute neighbor, Yusuf, sat and ate, chatted and laughed at the restaurant. It was at that time that the snob introduced himself as Ike.

Back in the bus, as we approached Opi in Nsukka, I slipped my hand into my backpack in search of my phone.

Mama had been calling—24 missed calls.

I dialed her number; it rang, but no answer came.

I was about to put the phone away when I noticed series of debit alerts on it. Why had I not been hearing the beep of the SMS? Thieves had been withdrawing my money, my hard earned-money, somewhere. How was that possible?

“I think they are using the last four digits on your ATM card, left on the POS debit slip to dupe you.” Ike brought out his phone and called out some codes, which I dialed.

He was a banker, and I did not know.

“With this, your account is blocked temporarily. They won’t withdraw any more money.”

“Thanks,” I whispered, tears gushing down my cheeks. I knew there was something fishy about that POS man. I knew it. I had felt it.

We had been stopped for close to two hours now, and almost every engine on the road had been turned off. Some said there was an armed robbery going on at Ugwuobia. My heart ached on hearing that, and I became more nervous. Looking at Yusuf, he was deep asleep.

I imagined the robbers approaching and making away with our valuables, or worse still, raping the ladies and shooting who ever refused to dance to their wicked tone. Ike tapped me and asked if I was alright. I wondered why he was suddenly being nice to me.

We reached Nkpor at exactly 8:45 am. I woke up and met Ike’s eyes staring at me. Yusuf was still fast asleep.

“For being rude at the park.”

At this point, I noticed he was not as proud as I had concluded. The fact that he apologized showed he was humble, but still wasn’t sure about him.

A few minutes later, he told me why he had acted that way.  We actually went to the same secondary school. I remembered vividly the day I insulted him in the presence of Junior students, and I still regret I did, though I never had the opportunity to apologize.

I was shocked that he recognized me but that I hadn’t been able to do the same until he told that story. Ike was one of the most gentle and brilliant students back then. Now, here he was.

At the pack, I exchanged numbers with Yusuf. I and Ike boarded the same taxi since we were going in the same direction.

At the wedding, almost all my close relatives were present. My brother’s face beamed with joy upon seeing me.

“I’m glad you made it on time.” I congratulated and hugged him and his beautiful wife.

Mama was happy yet surprised to see me.

Two days later, my phone broke, and boredom pinched me. I needed to be busy with something. I began scribbling in my notebook. Ike marveled at my bits of writing and encouraged me to write more.

“Wow! You can write,” Ike exclaimed.

That was how I discovered my passion for writing.

Ike became a good friend I have always been grateful to have. He is handsome, but unlike most guys that have come my way, he has added value to my life.

Ogochukwu Ugwu Lucy hails from Akegbe Ugwu in Enugu State, Nigeria. She's a speaker and student coach. She has written many works, some of which are under publication, and she loves family over everything.