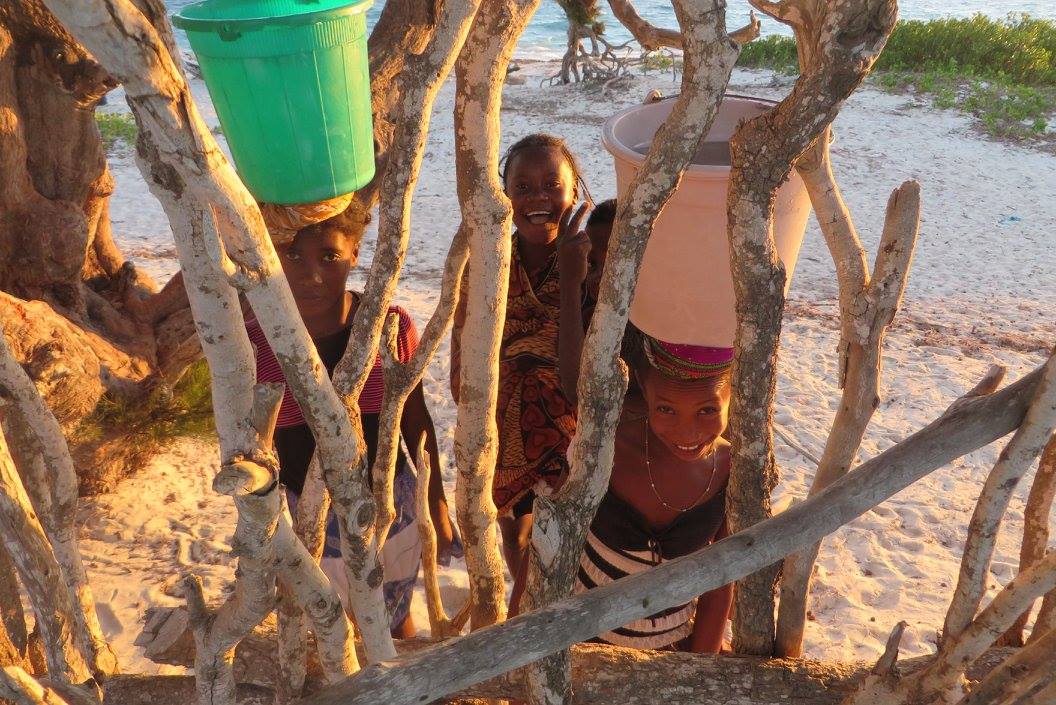 By Annie ChenMarch 30, 2021Africa
No Comments

An idyllic beach in Madagascar seemed suspiciously quiet to our writer… and then the locusts arrived!

It had been a picturesque week, boating from one small fishing village to another in the south of Madagascar on a “surf camp” excursion, catching the waves with our local guides in tow and another pair of surfers. Now, with just one final village to stay in before we completed the tour in Anakao, we were pulling up quickly to shore…but something was wrong.

The straw-thatched huts in the distance appeared to be crowned by a dark gray turban. That’s odd, I thought. It wasn’t quite sunset yet, and the weather had been beautiful and sunny all throughout our week’s journey. There was nobody on shore, even though normally at this time of day, we’d encounter children playing on the hot sand or a resting fisherman watching the colors changing in the sky.

I glanced backwards at the second boat zooming along behind us to check on the others, squinting with the bright light of the golden orange sun behind them. They were also pointing at the mysterious “cloud” we were nearing, and the two guides started shouting across the water with one another.

I heard my friend ask the guide something in quick French, and although I didn’t hear the answer between the roar of the motor and the wind ripping through the air around us, I saw his eyes grow wide as he shot me a nervous glance.

“What is it?” I braced myself.

I gave a half-suppressed, incredulous laugh. Surely he was joking.

Out of the corner of my eye, I saw the other couple start zipping up their windbreakers and rolling down their cargo pant legs.

“The guys said to cover our bodies completely with any clothes we have.” My friend moved towards our bags, jammed under our seats, as my brain slowly processed the fact that he wasn’t pulling a (very) cruel prank on me.

Our boats slowed down as we pulled within 30 feet of land, and then 20 feet. I was moving purely by muscle memory, jamming my legs into a pair of long sweats and quickly wrapping a colorful shawl around my head and shoulders. My eyes were glued on what was becoming an increasingly clear swarm of locusts with every foot we advanced. For half a second, I considered the likelihood of getting the boat captains to turn the boat around and head in the opposite direction.

Before I could make my suggestion, the bottom of the boat softly sank into a sandy coastline, and the locusts nearest to the shore whipped by us, landing in the water. Easily six inches long, they were being blown around helplessly in the windstorm.

“Allez!” The guides hopped out and yanked our boats with inhuman strength. My friend and I tightened our backpack straps, and I clung to my scarf with one hand, adrenaline surging through every fiber of my being. We unceremoniously jumped out onto the sand, and I immediately felt a crunch under my bare feet.

The locusts were a blanket of black on the golden, sandy beach, sheltering among the low mounds of sand, but, unfortunately, right in our path to the huts. The four of us half-scampered, half-hopped, desperately trying not to land on any, but also attempting to cross No Man’s Land as quickly as possible.

The wind threw the less-fortunate airborne locusts around effortlessly as they smacked loudly with a resounding thwack into the backs of our jackets and our pants. I yelped each time I felt the unexpected impact on a different part of my body, cursing the day I agreed to go on this trip. The chaos of those eternally long minutes was exacerbated by the howl of the wind and the falling darkness, so through the narrow opening of my headscarf, it was impossible to know where the other three were in relation to me. In retrospect, I can only imagine the locals chuckling to themselves, watching from the windows of their homes as the oddly-wrapped foreigners, weighed down by duffel bags and brightly colored backpacks, hopped and leapt about while squealing all the way from the edge of the water to the huts.

I clambered onto the wooden steps leading to our hut, extremely conscientious of the damp, wooden surface my fingers made contact with, grateful that it wasn’t moving, black, crunchy bodies instead. Kicking open the thin door, I hesitated, scanning the room quickly, my heart sinking as my eyes adjusted to the darkness.

Locusts covered every inch of the one-room hut: clinging for dear life onto the mosquito net of our bed, on top of the white pillows and single bed sheet, hanging upside down from the straw roof, and along the edges of the open windows.

I tiptoed cautiously inside, daring to peep inside the adjoining bathroom, and let out a cry of horror. The shower stall was a sea of legs and wings, barely visible inside the even darker bathroom, and the sink and toilet bowl were both brimming over with locusts climbing on top of one another.

My friend went to work swatting the stubborn intruders off the bed, one hand holding up the locust-laden mosquito net, and the other wielding a hiking boot. Meanwhile, I yanked another jacket out of my backpack and tried to flap it towards the locusts jumping around near the doorway to shoo them out onto the platform, or at least prevent more from entering. It was an uphill battle—I kept thinking back to a woman I saw once in a small desert town in Jordan, futilely sweeping sand off her porch.

Needless to say, neither of us slept a wink. Huddled under the paper-thin sheet, I could still make out their sudden leaps by the low moonlight streaming through the open windows. I twitched with each abrupt movement flashing by or soft thud punctuating the soft whooshing of the wind as they slammed into the straw walls.

My friend rose to go to the bathroom in the middle of the night, carefully slipping through the smallest opening possible in the mosquito net and quickly drawing it shut again before I had a chance to remind him. I tried not to listen to the padding of his footsteps around what I knew were clumps of locusts on the floor. Then, suddenly, I heard him swear loudly in French when a dozen toilet-bowl-dwelling locusts flew up at him angrily for disrupting their safe haven.

After an interminable night, I sleepily opened one eye to the dazzlingly bright sunlight filling the hut. It took me a moment to remember where I was, and I sat up quickly, turning and twisting my head to glance around the sides of the bed and through the bathroom doorway. Miraculously, the wooden floors and straw walls were actually visible now, no longer packed wing-to-wing from floor to ceiling.

The wind had also died down to a gentle breeze, so when I reached for the door handle, nervous at what would greet me on the other side, I let out a huge sigh of relief to see locust-free blue skies. There were, nonetheless, several still on the wooden platform and many in the sand, some half-crushed and others drained from the previous night’s devastating battle against Mother Nature.

My friend and I zigged and zagged towards the dining hall, a larger hut further inland, where meals were served. The wait staff had cleared off a long rectangular table for our group, and I noted, with a slight shiver of last night’s memories still raw in my mind, the stray locusts still leaping around the far walls and the other dining tables. When the other two surfers trudged in a minute later, I grinned at the sleep-deprived and traumatized expressions on their faces, knowing full well that we looked no better. We grunted and nodded in greeting, silently passing around the basket of toast and jam, soaking in the camaraderie of the moment like we had just served in a war together—and barely survived.

After breakfast, we had half an hour before our boats would take off for our final destination, so my friend and I decided to take a stroll around the rest of the peninsula. Bemused, we caught groups of excited young village kids dragging old fishing nets through the sand to catch as many locusts as they could. Those without nets scrambled to keep up with the older kids, using their bare hands to snatch them off the ground, clenching them tightly, completely unbothered by the fact that these insects were the size of their faces.

An elderly man nearby saw us watching the kids and ambled over. In a low drawl, he explained that, occasionally, the kids’ parents will roast and serve the locusts as crunchy, rare snacks for the whole family. I blanched at the idea, watching the children squeal with delight at each new catch, proudly showing them off to one another. The sun shining down on our faces and the sound of innocent laughter all around us was almost enough to slowly edge away—but never completely erase—the apocalyptic doom and dark terrors of the previous night.

Annie Elle works in international education and has lived and worked abroad for the last 10 years. Originally from Los Angeles, she has traveled to over 90 countries and continues to seek out new foods to taste and extreme sports to try.