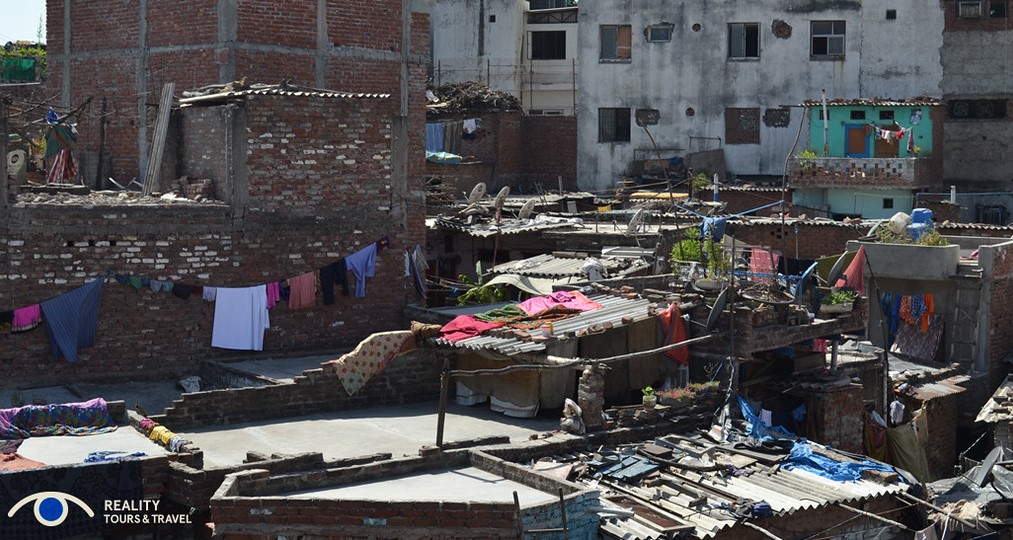 By Laura OlcelliSeptember 14, 2020India
No Comments

A traveler takes in the colors and energy of the Sanjay Colony outside New Delhi, forcing her to rethink her assumptions of what it means to live in a “slum.”

After the expected cordialities, we leave CP’s distinctive network of concentric circles, white-washed Georgian-style buildings, and big-brand shops on the surface to be swallowed by the city’s world-class metro. In just over half an hour, we re-emerge at the Okhla Industrial Area.

Suddenly, I realise the point of departure accentuated the contrast with what was awaiting at the destination.

As we approach the basti, I feel instantly submerged by a tsunami of colours, smells, sounds, impressions, and activity. Everybody is so engrossed in whatever they’re doing that they appear to be out of sync with everybody else, as well as the surroundings. It’s like stepping into a large puzzle where the small pieces won’t fit together. There’s traffic of vehicles and pedestrians in all possible directions. Litter to dodge. Cows. And if that weren’t enough, now our group as well.

The first stop is the colony’s clothing factories. Our guide, Hema, gives us examples of international fashion brands that manufacture apparel in India; the shopping aficionados among us nod. But the main reason why we’re here is to witness the involvement of local women in textile recycling. We’re told these female workers comb through leftover cloth up to 10 hours a day, seven days a week, and earn about 200 rupees (US$3) a day. They work outdoors in the summer heat and winter cold, rugged up in thick blankets or sheltered from the scorching sun.

Lost in a rainbow of pieces of fabric of all types, dimensions and shapes, we’re admiring their industriousness when some children run towards us and ask to shake hands. The spectators have transformed into spectacle.

I later discover that the puzzle pieces do fit together after all – an example of how Indian society has both individualistic and collectivist traits. In fact, many of the female residents have developed an interconnected chain of micro industries – from stitching to packaging and selling of items of clothing – to help support both their own family and the broader community.

Walking single file along very narrow, shaded and damp lanes, with open sewers on each side, we set out for the heart of the Sanjay Colony. One door is open. We climb the stairs and reach the rooftop… and the curtain rises on a beautiful cacophony of vibrant colours. They’re in front of us. Beneath. All around – 360 degrees. From a bird’s-eye view, the intensity is reduced and everything looks square-ish: the box-shaped houses of exposed brick, the rectangular corrugated tin roofs, the towels hung in the open air to dry, the small windows (though few and undesirable in such a densely built area). Everything is so bright and angular – except for the thousands of pale satellite dishes. We learn that inside these small homes live up to 10 people plus a TV (otherwise known as the eleventh family member).

Another short walk through the maze of the colony – interspersed by soft mountains of clothing fabric that, just like landslides, obstruct the passage – leads us to the doctor’s clinic. Nobody’s there. We sit on the examination bed and contemplate both chemical and Ayurvedic remedies traditionally used in Indian medicine. In the end, Hema reveals that her favourite therapy is actually music and dance; her laugh is contagious.

Before reaching the school – the last stop in our itinerary – we take some time to chat outside a small Hindu temple. We wouldn’t have the time to talk about the 330 million gods that some claim as part of Hinduism, but we list the names of Brahma the Creator, Vishnu the Protector, and Shiva the Destroyer. Finally, we acknowledge one of the most easily recognisable and widely worshipped deities of all: Ganesha, the elephant-headed god, or the lord of good fortune. Hema says she calls upon him when something new is about to begin; I ponder what I’d wish good luck for.

The logo of the NGO that organised this tour is a stylised eye: a symbol of knowledge, of truth, in some cultures. It’s through this symbol that I want to remember my contact with the Sanjay Colony. As a reminder that my views about what ‘everyday life’ means for many in this part of the world were challenged. As the perfect depiction of the fact that I was observer, observant and also observed.

Photo Credit: Photography is not allowed for visitors to the Sanjay Colony. Copyright Reality Tours & Travel.

Laura Olcelli is a freelance travel writer and journalist currently based in the UK, and a regular contributor to Matador Network. She has a PhD in English focused on travel literature and has published widely about literary criticism applied to travel writing, including the award-winning book Questions of Authority: Italian and Australian Travel Narratives of the Long Nineteenth Century. Laura was born in Italy and has lived in five countries and travelled to over 45.