The Heroes of Nanjie-Cun Square

By Nathan James ThomasOctober 28, 2016Stories from the past
No Comments 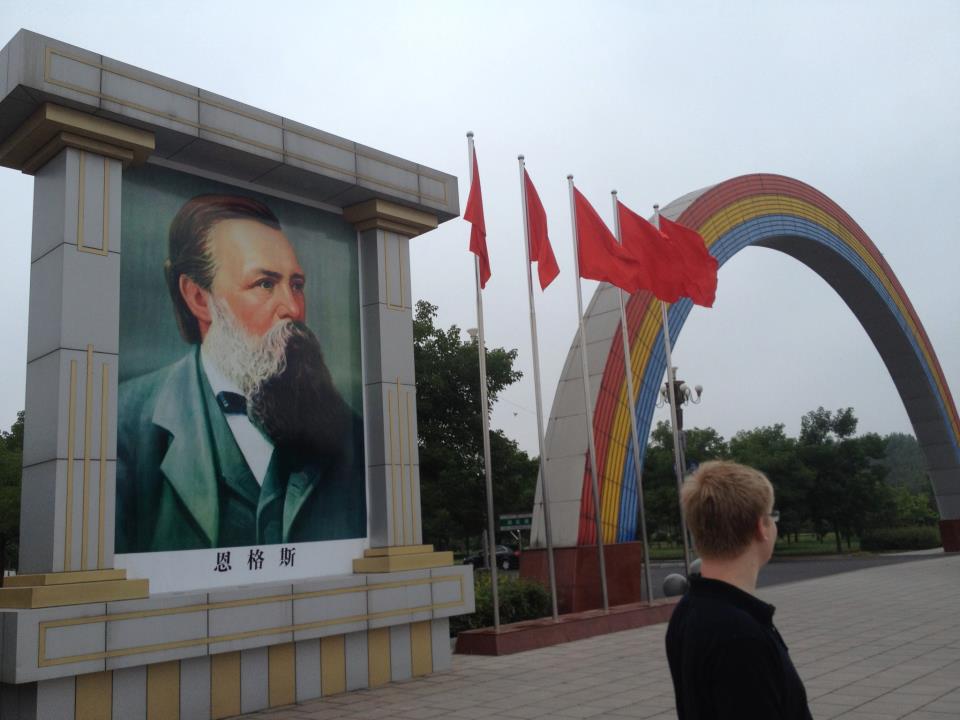 The author and Friedrich Engels. Photo by Tiho Mijatov.

In 2012, motivated by an article in the New York Times and a tantalizing hint in the Lonely Planet guidebook, myself and my traveling companion Tiho Mijatov set out from Beijing to discover the small village of Najie-cun, which claims to be China’s last genuine Maoist collective.

Thanks to a sweaty Beijing taxi driver who scammed us of 50 yuan (rookie error) we ended up missing our train to Zhengzhou, where we would catch an onward bus. We managed to get two tickets for the next train, an overnight journey that would take about 10 hours. The tickets were dirt cheap. This was probably because they didn’t include any seats.

For those who haven’t had the pleasure of enduring a 10 hour journey in the third class carriage of a Chinese train without seats let me briefly describe the experience:

At first, everything is hilarious. After all, you’re an intrepid traveler for goodness sake, and this is all fun and games. You’ve bought a bottle of cheap Chinese ‘wine,’ which, despite being a suspiciously green color and at least 100 proof, you consider an ideal tonic for the journey.

You sit on your suitcase in the aisle, and enjoy the attention of the staring locals. They crowd around you, the only westerners on the train, and point and stare. They offer you cigarettes. Everyone is smoking – even the conductor! One old man has ingeniously rigged a Sherlock Holmes style pipe so that a single cigarette can be plugged into it, the tip glowing red every time he inhales.

And then time begins to drag. You grow uncomfortable, tired. It’s past midnight, and your suitcase is a less than ideal resting place. You feel like you’ve been on this train forever. Your whole life lived on this rough suitcase, your back aching every time the train jolts. You look up at the sprawled, snoozing locals. Some of them have on this train for days, laden with supplies, heading back to their distant village after a mysterious mission in Beijing.

It was after experiencing these conditions that we arrived in Zhengzhou. And that was just the start of the trip. After being shouted at by impatient bus conductors and avoiding kidnap by cackling taxi drivers, we finally entered the strange village of Nanjie-cun.

Four Faces of Communism In The Old Town Square

We had arrived shortly after dawn, shaken by the journey and groggy, in that otherworldly state of mind when even your own living room would seem mysterious.

When Christopher Hitchens visited North Korea, he entitled his subsequent article ‘Visit to a Small Planet.’ Arriving in Najie-cun was a matter a leaving the familiar world behind.

Instead of a gate, the village is separated from the highway by a giant rainbow. From the moment the taxi passed underneath this garish, colorful arch the air was immediately filled with shrill propaganda music. We looked around for the source, and saw Mao Zedong himself.

The music was coming from the direction of a giant, white marble statue of Chairman Mao which stood in the middle of a large, open square. On each corner were large, three meter high portraits or Karl Marx, Joseph Stalin, Friedrich Engels and Vladimir Lenin, each staring up at the Chairman.

There was no one else in the square, just us and the five heroes of communism.

There was only one hotel, it was right outside the main square, and it seemed like we were the only guests. Our room was a mess of wires, there were cigarette burns on the sheets. We dropped off our luggage and left. A girl had stationed herself on a small desk outside our room. She stationed herself there, it seemed, whenever we were inside.

After gaping again at the square, listening to the propaganda music and almost drowning in the absurdity of the scene, we set out to explore. Najie-cun was a communist collective, we reasoned, so the factories should be the main showcase, their point of pride. They were easy to find, the wide, long, straight roads that spread out from the main square were lined with them.

Choosing one factory at random, we wandered up the driveway and tried the door. It was open. We stepped inside. Bustling women in sanitary uniforms were hurrying back and forth. One stopped and gaped at us. We smiled. She smiled back. They were clearly not expecting visitors. We looked around for a bit – the place seemed to be processing instant food – and left.

Bowing to the Great Helmsman

We ate dinner in a truly bizarre restaurant. The place was tiny, and, as with our hotel and the public square, we were the only guests. Back then I spoke almost no Chinese, and so the menu was incomprehensible. We pointed to a few items at random, handed over a pitifully small amount of money, and were led to a tiny room upstairs. It felt like a prison cell. One table, grubby tiled walls, a small window facing down into an alley below.

One plate arrived, and then another, and then another. Pretty soon an absurdly large banquet was facing the two of us. All dishes were lukewarm or cold. Most were inedible. Not wanting to embarrass the earnest restaurant owner, we ended up hiding most of it in our backpacks, stuffing the food roughly into plastic bags.

Walking back to the hotel via the square, we stopped again to contemplate the five heroes of communism who looked haughty, even menacing, in the darkness. Two men were walking by dressed in fancy yet shabby clothes. One appeared to be wearing a faded dark blue uniform of some kind.

They headed straight for us. One hung back, and the older of the two approached. He was smoking a cigarette. In our imaginations he was without a doubt a policeman, come to test or ideological purity. He pointed at the statue of Mao Zedong. ‘Mao’ he said. ‘Yes,’ I said, ‘he’s very good,’ pretty much exhausting my Chinese. This seemed to please him however, and he cackled and pointed again at Mao. “Very good. Very good.”

He stopped laughing and became serious. Pointing again at Mao, he said ‘bow.’ He inclined his head and straightened up. He looked at us once more and said again, more firmly, ‘bow.’ We did as we were told, and bowed slightly the tall white statue. The man smiled, lingered for a painful moment, and slipped away into the night.