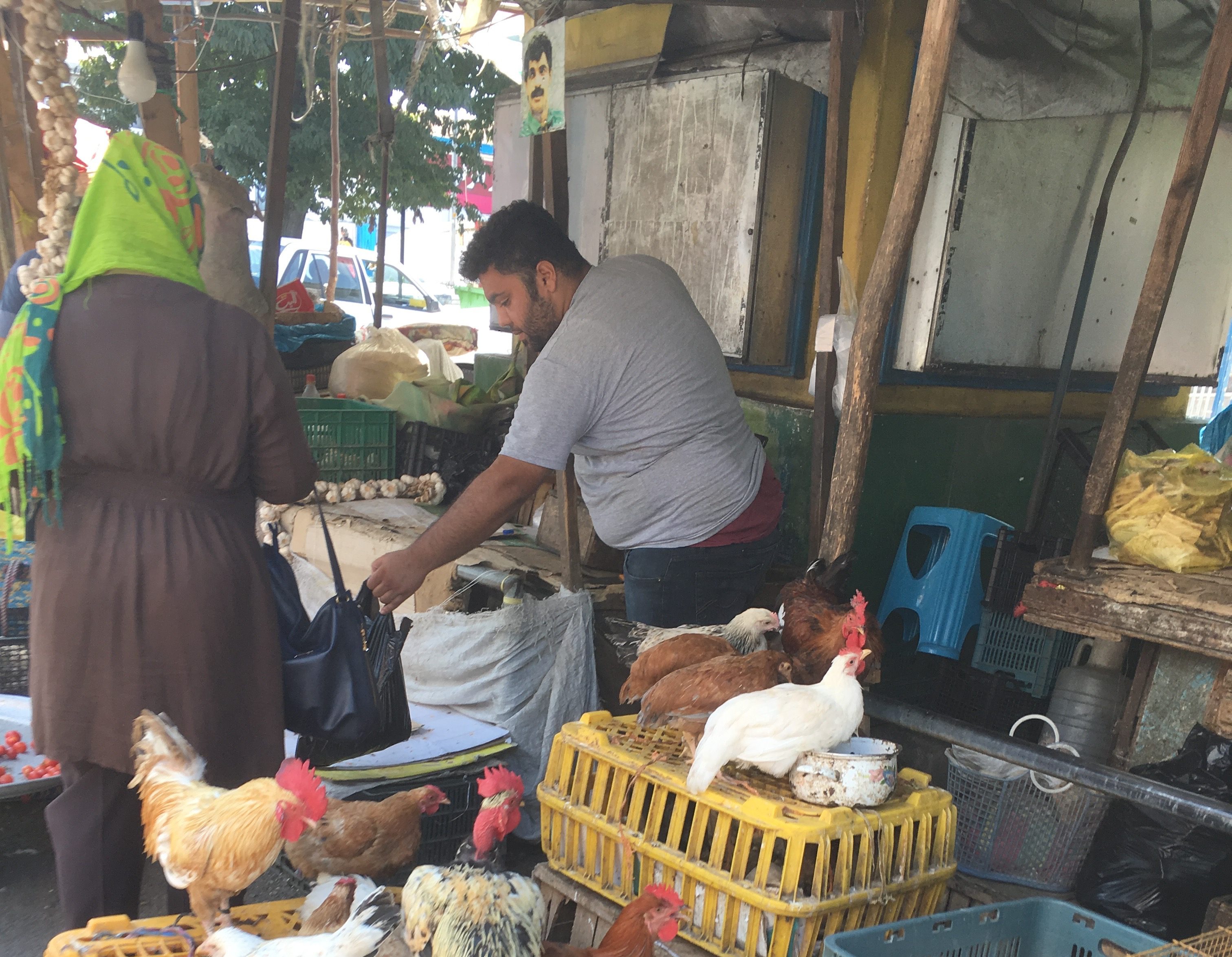 A Dip in the Caspian Sea

The sweaty grip of another border crossing. Azerbaijan at our backs, watchtowers among the trees. We’re waved through a gate, and park in a small hanger.

Officials stroll to and fro without bothering to feign purpose. Below us is a concrete pit, with room for someone to walk underneath and see what secrets our car has hidden among the dust and iron.

Booze is banned in Iran. And yet we’re still going. And we suddenly remember there’s a bottle of whiskey in the glove box. Left over from the ‘for bribes’ supplies gathered in anxious expectation of avaricious officials.

R_ gets out, rustling an empty crisp packet in has hands. Using this as a decoy, he sneaks the whiskey into a nearby bin and returns to the car. An official looks at us sternly, before swaggering back to his air conditioned office.

The ritual of passports proceeds at a the usual pace.  And then we’re waved on, allowed out of one country, about to apply for access to another.

A soldier stands stern in his sepia uniform. He stands beneath the green, white and red flag of Iran. Beneath a giant portrait of the president. Beneath a giant portrait of the Ayatollah. Two stern men with white beards, glowering in grim menace. From the soldier we expect the worst. His black books and black machine gun sparkle in the Persian sun. In our battered car, unshaven, unwashed, unslept, we feel guilty, ashamed of our presence.

The soldier took our passports through the passenger window. He flicked through them silently, handed them back, and then smiled, a warm, genuine smile. “Welcome to Iran.”

The other officials were not in uniform. It was hard to tell who was a ‘legitimate’ customs officer, and who was just along for the ride. People came and demanded papers. They wore jeans and faded T-shirts. We gave them documents, passed them cigarettes.

For 8 hours in 35 degree heat our passports lead us from room to room. Everywhere the flag, the portraits of bearded men, the smiles of genuine welcome, the complete lack of haste.

And then the exit appeared, the way out of the concrete maze. Passports stamped, a wad of scrawled documents in the glove box, they waved us goodbye.

The fretful boredom we’d felt at the border was replaced by an electric thrill. We’re in Iran!  The country you see on the news every night, and every night for the wrong reasons. The so-called “Axis of Evil,” a supposed enemy of the West. And yet the friendliest land I have ever visited.

A man in a bright pink shirt waited about 100 meters down the road. He had the sweaty brow and bloated paunch of a money changer. Surreptitiously, I hopped out of the car clutching two perfectly manicured US $100 bills. The man grinned, and handed over a stack of notes which added up to several million rials. “Welcome to Iran.”

100 meters further into Iran, and already we’d entered a new continent. The bustle of Asia. Shops crowded by the side of the road. Bicycles and motorbikes appeared out of nowhere. The Caspian sea glittered ahead.

The sun burned our skin through the open windows. Plastic oddities of all colors pressed against shop windows. Unfamiliar script on all signs. National flags on every corner, lining the bridge like a wall, the unmissable reminder that this is Iran!

We parked on a corner and lumbered drowsily into a dark cafe. There were few tables. Old men sat eating kebabs and bread in the corner. The young man who worked there spoke no English or Russian. We pointed, and were served thick hunks of meat on sticks, warm frisbees of bread, pepper, salt and lemon sauce, washed down by tea served in small glasses. This was to become our staple meal while in the Islamic Republic.

When it was time to pay, the young man grinned nervously and made a great show of adding up the huge sums on a calculator. Hundreds of thousands of rials, perhaps a few USD per person. As I was paying, I noticed the small restaurant come alive. People crowded in, kids of high school age. All boys. One clutching a cellphone. Loud, confident, but shy when we made eye contact. They’d been summoned here to see the foreigners.

The boy with the phone spoke some English. He looked to be around 13 or 14. We asked him the way to the beach. “Follow me.” We climbed wearily back into the battered cars, and he hopped onto a small motor scooter and lead us down the narrow streets, onto a dirt road through a field.

Cresting a small hill, the sparkling blue of the ocean was suddenly right upon us. People were bobbing in the distance, and cows grazed beside the sand. We parked on the grass beneath a low tree.”Ok!” said the boy. He stood on the pedals of his bike and assumed an authoritative tone. “One selfie, then I go.” We were happy to pay the price.

With a nonchalant wave the young man set off on his way. We flung off our dusty shirts, and strode gratefully into the warm sea. 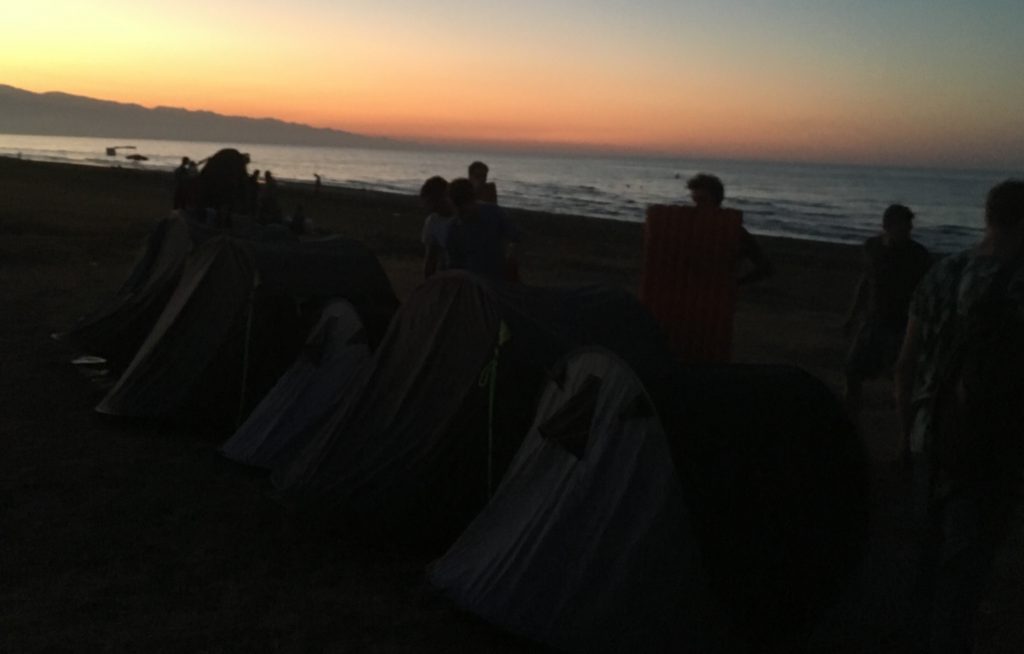 Setting up camp on the beach