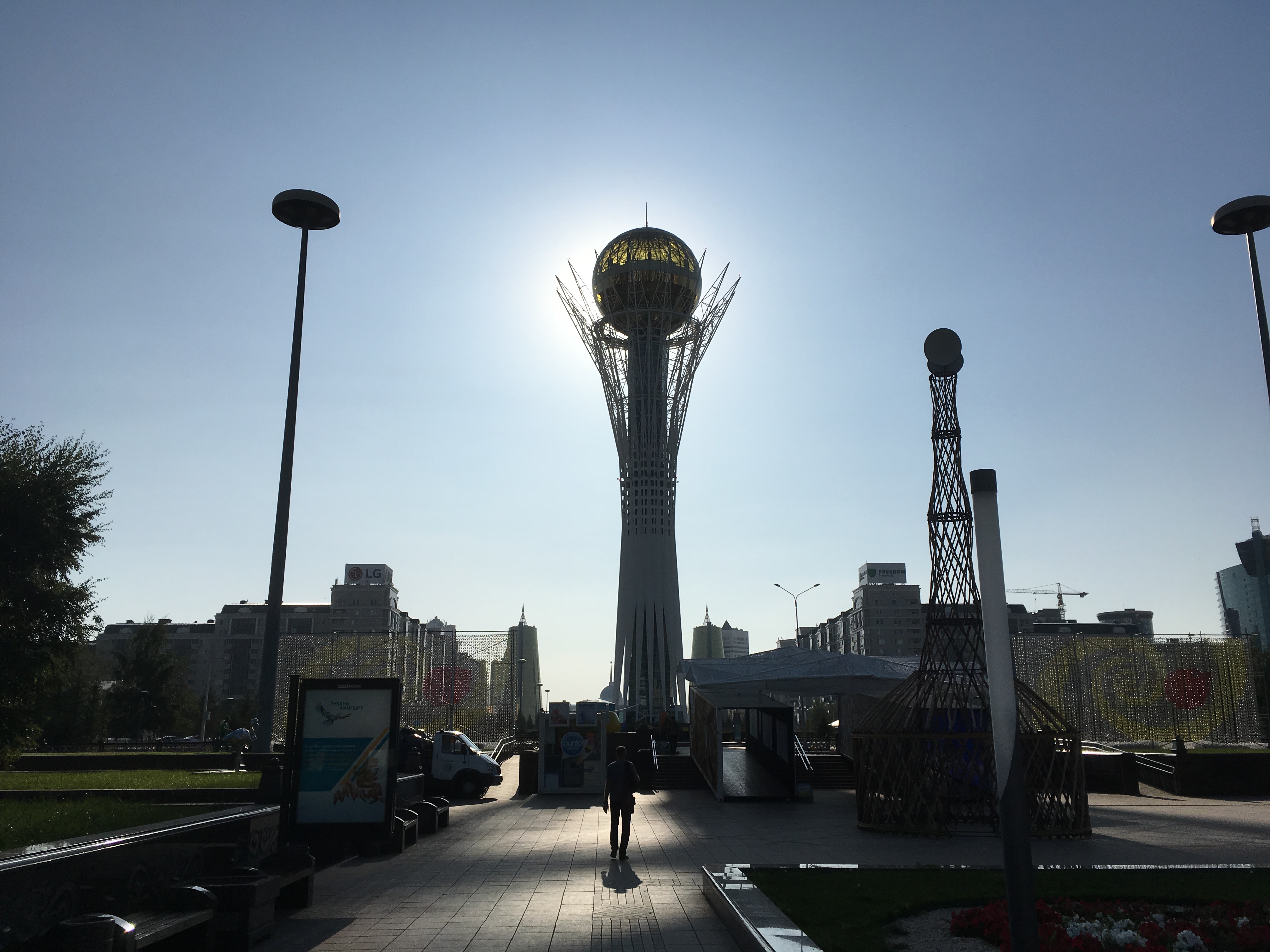 Pause at an intersection to check directions to Almaty railway station. A young man approaches, his thin face shiny with sweat. He goes to speak and his eyeballs swim in vodka. He slurs some words in either garbled Russian or impenetrable Kazakh, and reaches out his hand for money. As he reaches forward he stumbles violently, his right leg collapsing under him as if he’d stepped into water. I sidestep and resume walking, the wheels of my suitcase rattling along the jagged pavement.

The hotel (small, shabby with lights that hummed like a hungover bumblebee) had printed out the ticket to Astana which was now folded in my pocket. On the check-in desk was a large, glossy book featuring pictures of the nation’s president, Nursultan Nazarbayev. I flicked through it while the receptionist slapped and grunted at their ancient, uncooperative printer.

Handsome in a symmetrical way, silver hair, steely and self satisfied, Nazarbayev looked exactly like the dictator of a Central Asian nation. On one page he grins at the camera, surrounded by identical flunkies all wearing woolen hats. One of them looks familiar… it seems the actor Gerard Depardieu has come to pay his respects to the benevolent leader! In another frame they pose arm in arm, faces flushed, looking happy.

The position of president of Kazakhstan was established in 1990 and, as of 2017, has only been held by the one man. Like most central Asian leaders (the story rhymes with those of Tajikistan, Uzbekistan, Turkmenistan and Kyrgyzstan), Nazarbayev came to power during the waning days of the Soviet union, made a show of democracy, and miraculously managed to win every election for the last 30 years.  He turns 78 next year.

Seven years into his first term he moved the nation’s capital 1200 kilometers North, from historic, humming Almaty to the sleepy Siberian town of Tselinograd. They renamed it “Astana” which means “capital city” in the local language, and set about designing a city to impress. I was eager to see it for myself.

It was hot outside but inside Almaty’s central station it was cool and dim and eerily still, as if 5pm had leaped directly to midnight and everyone else had somehow got the memo. Most waiting passengers appeared dark, round Asiatic faces, grim eyes. Stood still, staring ahead. Occasionally people of Russian origin would appear through the crowd, their blond hair and pale features standing out. A blonde woman, barely 20, wore tight denim shorts and pouted handsomely against the granite wall. A baby cried on the bench she reached over to pick it up.

All signs were in cyrillic and I’d come early so as to decipher the strange writing and catch my train. Astana. In cyrillic it looks like Астана which is not so different. The station was a large and faded relic of the Soviet Union. There was a canteen upstairs and and small room adjacent to the main waiting area which you could find by slipping between the wall and a large stone pillar. This “Narnia” room was cleaner and emptier than the main waiting hall and contained, incongruously, a large flatscreen TV surrounded by phone charging ports and yellow “smile” emojis. (The wires were disconnected and the screen remained dead. For some reason I found this reassuring).

Outside on the platform, hawkers sat monk-like before piles of apples, water bottles and instant noodles. The train grumbled into view and halted before us. Guards materialized before each door, and small queues of glum commuters formed. When it was my turn to enter I decided to greet the guard in BBC English while handing over my folder ticket as if it contained secret instructions from the Politburo.

Hearing this foreign language spoken by an obvious outsider, the guard at first looked alarmed and then hurriedly adopted a servile manner and waved me through without bothering to read the ticket. Later in the trip he would angrily demand a second ticket inspection from the other travelers in my compartment, but I would mysteriously be exempt. Two months later in Ukraine I was to have the exact same experience on the train from L’viv to Kiev. (Don’t know why I bother buying tickets in the first place!)

Nikolai Lee was in his early 30s and had just returned from a trip to Poland where he’d gone to see Guns and Roses in concert. His grandparents had been sent from communist North Korea to populate the remote steppes of Kazakhstan. Part of the Koryo-saram, he was one of over half a million ethnic Koreans now at home in the former Soviet Union.

He spoke confidently in English, was well dressed and affluent. Our two top bunks were on opposite sides of the cramped carriage, my head practically touching the roof. Leaning on our elbows, socks sticking out the far end of the tiny beds, we chatted over the humming and creaking of the train.

Born in a small town outside of Astana, he worked in the glittering capital city as an accountant for a Kazakh coal company. He did not speak warmly about the capital city, it was a place to work, and he preferred Almaty. Less flash, more soul. And incidentally, good Korean food is abundant! It was not possible to talk politics.

Arriving in a strange city in Asia (or near it), you are immediately presented with a challenge: how to get a local to drive you to your hotel and arrive with approximately the same number of kidneys with which you left. Airports in China have solved this problem with legitimate taxi lines outside the terminal – wise travelers are happy to ignore the shouting hustlers and stand in a queue for up to an hour to ensure a safer journey.

Astana appeared to offer no such infrastructure. It was barely seven in the morning, an hour that, like Jehovah witnesses and vegetarians, I usually make a point of avoiding. I wandered to the road and flagged down a taxi that was cruising down the street – these tend to be safer than those in lie in wait for tourists – and thrust the hotel address at him. The driver attempted conversation in Russian and to my astonishment I was able to clumsily parry a couple of his questions. We got lost only twice and he stuck to the agreed upon fare.

At the hotel all chatter was about a tourist who had recently been ripped off to the tune of at least $100 USD by a dodgy taxi driver. It was all over the papers. There were few guests and the owner hung out in the common room and chatted. His background was in running worker’s dormitories. He decided Astana needed a clean, low-end hotel, and claimed he was filling this need in the market out of charity. Booking.com takes no deposits in this country. Locals have the habit of booking several places for the same night, visiting each of them in turn, and returning to the best one. He preferred to deal with foreigners. Oh, and the credit card machine is out of order this week; cash only.

Kazakhstan’s capital is a city of glass and steel surrounded by nothingness – the lone and level steppes stretch all the way to Russia. During my visit the streets were empty. Wide avenues lined with hollow glass monstrosities. Barely a car drove by. Towering, space age buildings glittered like ice beneath the central Asian sun.

The government moved here in from Almaty in 1997. Locals told me they wanted their seat of power to be closer to Russia and further away from China. Since then Astana has been drenched in coal money, adorning itself with skyscrapers, fountains and grandiose boulevards like a lottery winner run amok in a jewelry store.

The grandest of these boulevards stretches from the Khan Shatyr shopping mall to the Bayterek tower. The World’s Fair was going on, and the achingly wide street was occupied by round plastic baubles representing each country. I found North Korea but could not find New Zealand. There was nowhere to sit, nowhere to eat.

I walked along the silent street to the Bayterek tower – a golden globe cradled by steel petals, keeping watch over the still city below. The 97 meter high tower was filled with school children – the first signs of life I’d seen that morning – who stared through the sepia tinted windows and giggled. From this vantage point the city appeared to charge boldly in all directions, before finally capitulating to the ever patient desert.