On the Shore of the Aegean 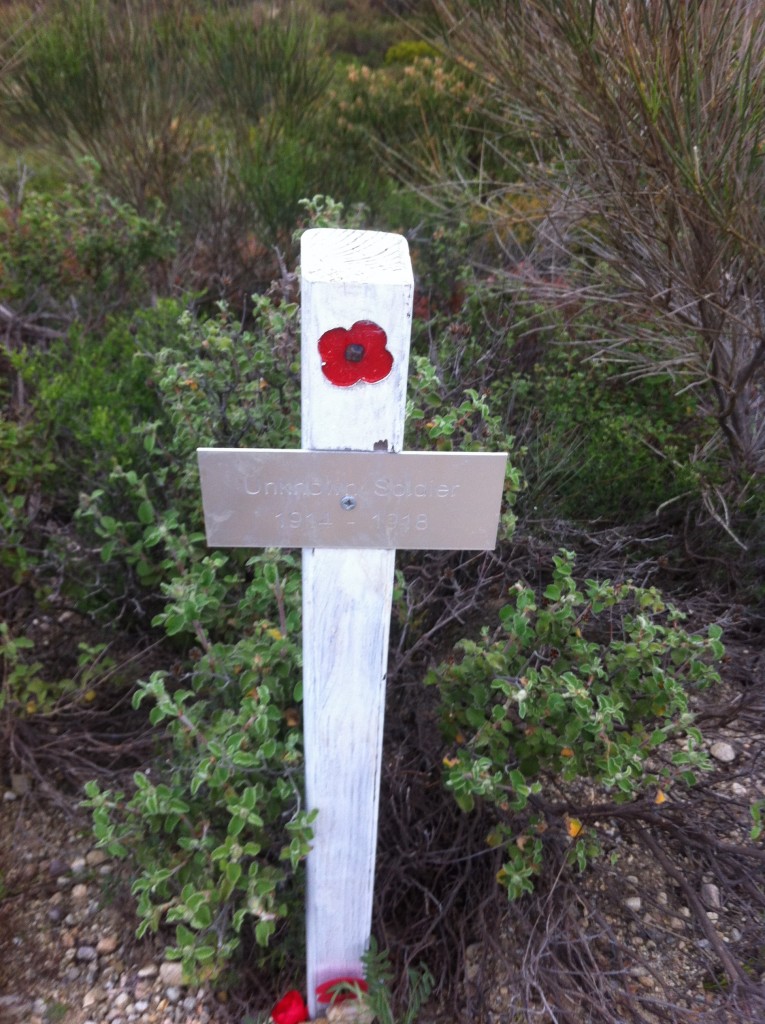 A cross for an unknown soldier, Gallipoli

The Galata bridge that spans the Golden Horn in Istanbul is normally full of touts and scammers. Gypsies beg on the ground, swathed in blankets, small children in their arms. Ragged boys place footballs in the middle of the path and line up small wooden blocks alongside the wall for the punters to kick over.

At dawn on the 24th the bridge was empty save for the fishermen crowded by the wall. Small ash fires by the road heating up their tea. The smell of fish and the fumes of the city. We had walked down the hill from the Galata tower and could see the mosques on the other side illuminated by the yellow morning light, their domed faces gleaming and towering minarets stretching into the sky.

We were walking fast. The plan was the meet our coaches in front of the Hagia Sofia and make the long journey Gallipoli for the 100 year Anzac Day anniversary the next morning. A century ago Australians and New Zealanders had been slaughtered in their thousands trying to force passage through the Dardanelles. This year over 10,000 Kiwis and Aussies would come to the spot to commemorate their sacrifice.

The military campaign was a failure, but from the death and loss came the awakenings of national consciousness. Our small countries at the bottom of the world decided to grow up, to be their own land, to think their own way. Rather than just shadowing the motherland, it started to mean something to be a New Zealander, an Australian.

We were here to be Kiwis in a strange land far away from New Zealand. The tour buses lined up in front of the ancient Mosque. We waited. That was the theme of the day. Getting 11,000 people in a space not built for so many was a huge task, bureaucrats from three nations took to it with glee.

But they got away with it. Everything worked, and it was a beautiful time. The sun set orange and huge to our left as we stood in the queue for Anzac Cove. It snuck behind the Greek island of Lemnos, where the soldiers had prepared for battle exactly 100 years before, and then sank into the sea.

By 8pm the stadium was packed. People would continue to flow in until 4am. It was cold but beautiful. A few stars in the Turkish sky and the narrow crescent moon. We were facing the water. They put the flood lights on the Aegean sea and we could hear the pale blue waves lapping at the shore.

A man spoke to the crowd. They played documentaries telling the story of the Anzacs. Different versions of the same film over and over again until dawn. Everyone cold and tired, trying to think of the soldiers, remembering our purpose for being here.

Hugging our sleeping bags close we tried to sleep in our seats. I drifted off and woke to an old man, a veteran, being interviewed on one of the screens. “I never remember a soldier refusing to go to his death”

Just before dawn the ceremonies began. A didgeridoo warbled against the fading night. Dawn. No one had slept. The politicians spoke. John Key, Tony Abbot, Prince Charles. The national anthems, sweet and innocent ballads from down under contrasting with the bellowed, declarative, rousing song of Turkey.

The sun had risen. A trumpeter played the Last Post. Everyone stood in silence and stared over the stage and into the water.

We left stadium and marched up Artillery Road, leaving the Australians at Lone Pine. The crowds reduced after that. There were 8000 of them but only 2000 of us. We wandered among the cemeteries and stared out over the cliffs into the water. We could see our tour buses, a white line snaking for many kilometres along the cost.

Seb and I left the path and headed up a narrow bush track to the top of a small hill. The cliffs fell away before us. There was a small white cross hidden amongst the shrubs. “Here Lies an Unknown Soldier.”

The long walk to Chunuk Bair. Two thousand Kiwis in the stands. A pale priest berated the crowd. A choir sung songs from home – Dave Dobbyn, Dragon. The crowd singing “take me to the April sun in Cuba.” It was raining. More speeches a minutes silence. With our blurry, sleep deprived minds we tried again to remember, to feel, to reach for the meaning of the day.

The ceremonies finished and the famous good humour of the antipodeans finally ran out. Our coach came, one of the first out of 300. The driver tried to stop for lunch. People shouted at him. He kept driving.

We returned to Istanbul after dark. The city stretched on. Tall apartment blocks, empty and dark with blinking red lights on the top, like in China. The roads grew crowded and shopping malls began popping up. We stopped at an intersection. Small children ran in groups to the cars and hammered on the windows begging for change.

After 10pm, back in front of the Hagia Sofia. We had set out from this spot 40 hours before. We walked into the Istanbul evening. It was Saturday night and the restaurants and bars were full. But not for us the glass of cold beer or reassuring whiskey. It was straight to bed and dreamless sleep.

We had stood where they had crawled. Had heard their stories and tried to imagine their last moments. Kiwis and Aussies had sat crowded together thousands of miles from home to remember a century old calamity. Our countries lost their innocence. They shed their childhood. New Zealand and Australia began in earnest that day 100 years before. We had returned, more than 10,000 of us, to prove that the Anzacs did not die for nothing.

To the Edge of Asia

Lost in the Light of Dawn

In Search of My Family’s Jewish History in...

The Refugee Opera Singer from Iran

A Dip in the Caspian Sea

The Petrol Merchants of Uzbekistan

On Crossing a Border