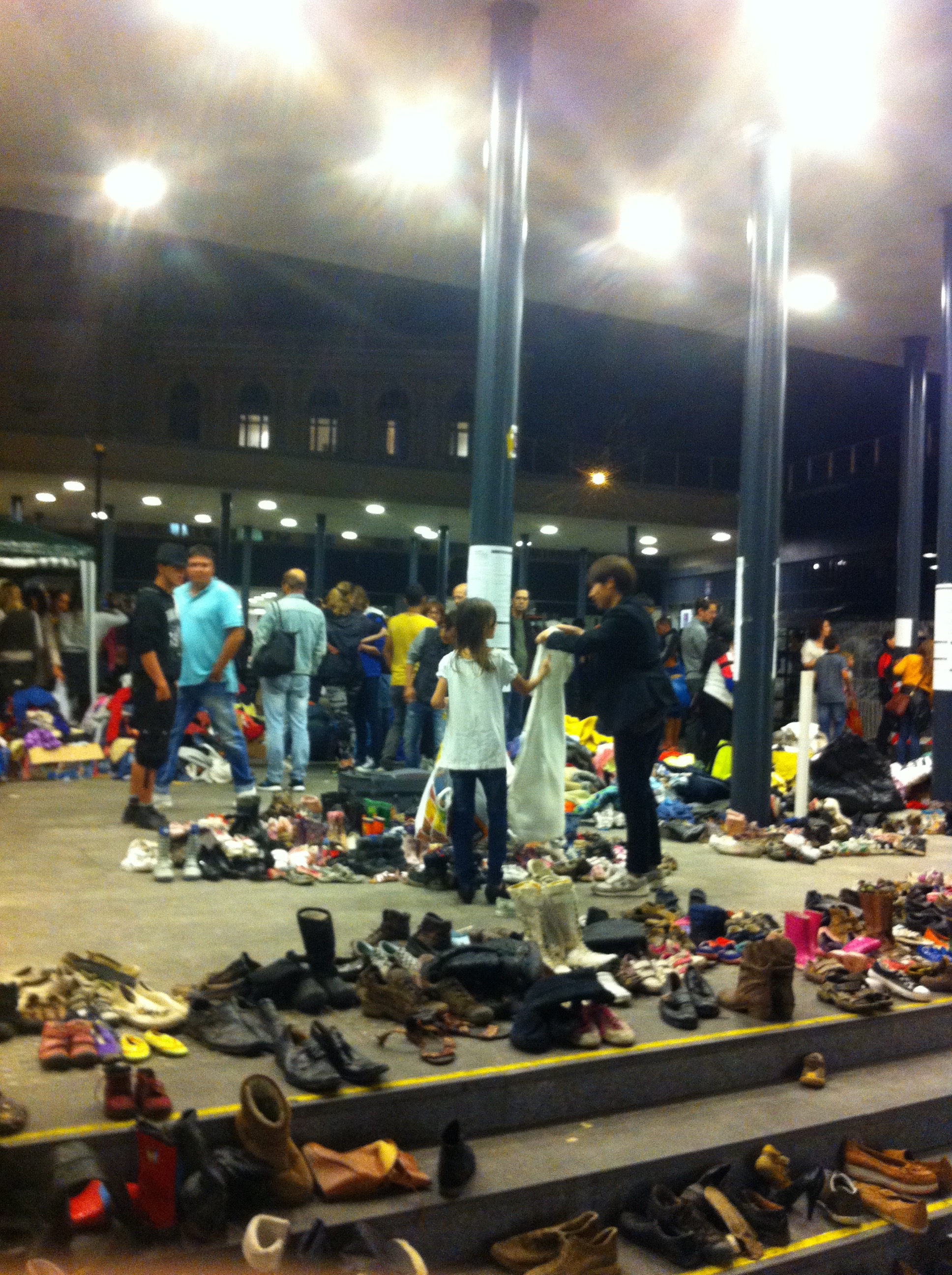 We went there the day after the buses.

Most people had already left. Carried over the border into Austria. Germany was waiting, arms open.

We came with good intentions but few ideas.

When our friends first went to Keleti with food they were mobbed. Children snatched the bags out of their hands.

3000 people had lain on the cold hard floor. Waiting

When I went things had changed. The trains were running.

People were happy. Many held pizza boxes, which they ate from hungrily. They sang and danced. We gathered in a circle to watch. Journalistic looking characters took photos.

A child, about 7 or 8, pushed his friends in a shopping trolly. It wobbled unsteadily as they went up an incline.

We went to the Tesco to buy warm clothes for those who remained. Two trolley loads full of puffer jackets, sweaters and shoes that we would never wear. Migrant Aid accepted the bags politely. They were tired.

The night before football hooligans had marched the streets. We heard them chanting in Hungarian. We heard their fireworks. They shouted “get out of our country.”

Police surrounded the station where the migrants tried to sleep. Later 400 buses came to take them to Austria. Some walked.

Two days later we were making sandwiches at a bar. Vegetarian. We took them to Nyugati , another station beside a migrant camp which hadn’t been in the news.

Like Keleti, most of the people had left. The few who remained took the sandwiches gratefully.

They too seemed relaxed. Young men swaggered in donated coats and kicked a football over the concrete.

I’d walked past a couple of weeks earlier, before the crisis at Keleti. Woman sat, wrapped in Burkas, and held crying children.

Blue signs had announced the “Transit Zone” as people waited, hoping for a future home. The signs had gone now.

Yesterday evening I returned to Keleti. Got lost on the metro. Sat with locals coming back from work.

The station was almost back to normal. A handful of tents lay sadly in corners. A dozen or so migrants sat in the courtyard using the Wifi.

Most of them had gone. Those that remained looked glum.

Sophia Duckor-Jones’ article on the refugee crisis from Budapest. She collected the money that paid for the clothes from Tesco, and walked into Keleti at the peak of the crisis to hand out food before any organised charity was to be seen.