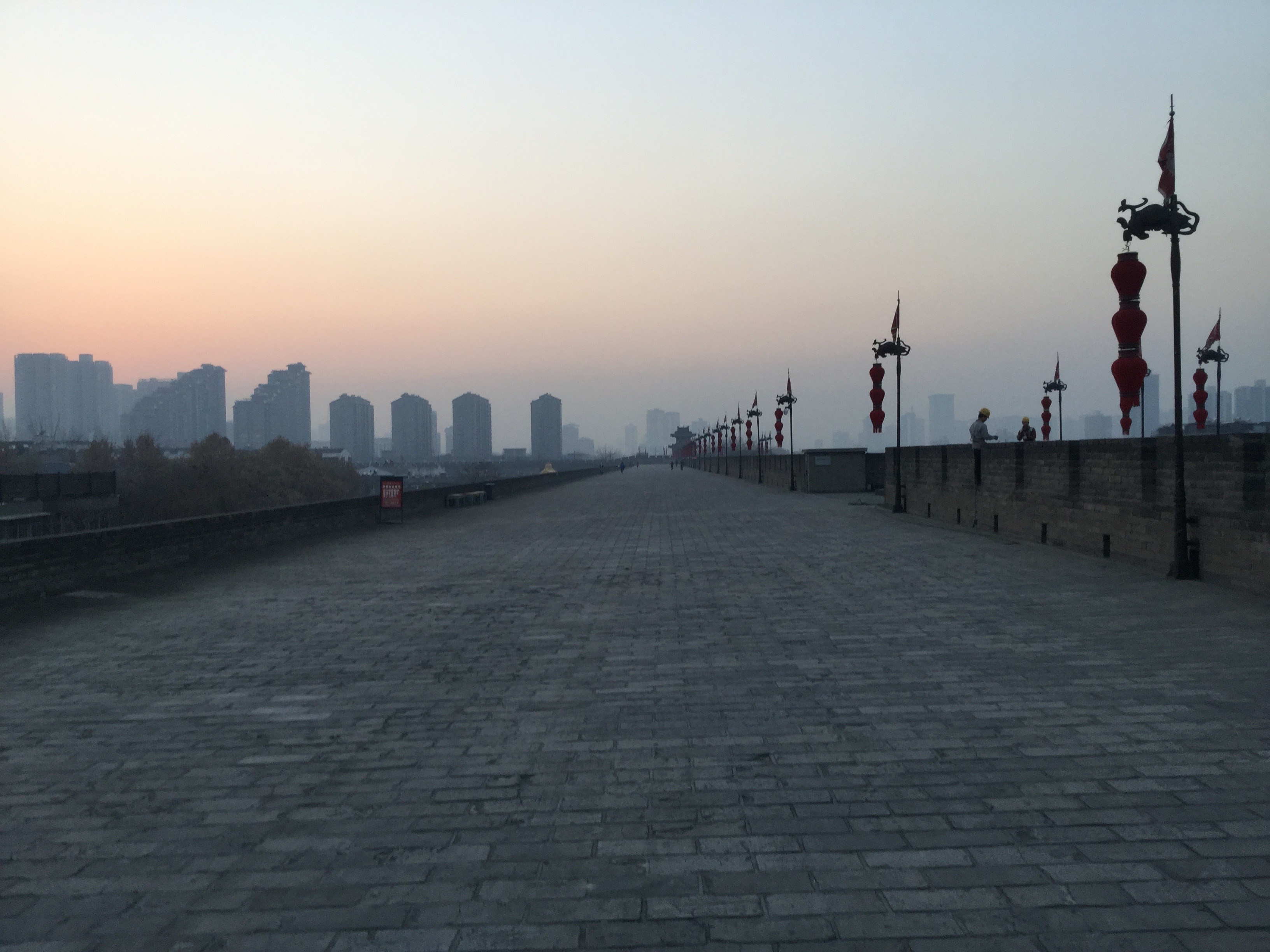 Reflections on China from the Tokyo Tower

We hightailed it outta Tianjin through smog that caught in your throat, erased buildings barely 50 meters away, and tinged everything with a sickly orange-brown hue.

Jaded from over a year in China, the thrill of the unknown, the different, which had attracted us to the country in the first place was replaced by weariness, discomfort. Even the Buddhist Monastery beside out hotel offered no respite from the roar of the city.

Beggars crowded the entrance, peering at us through delirious eyes. Speakers blared propaganda messages. Small black birds were chained to a stone bench, and tweeted hopefully as we walked past.

Food was hard to come by. The Italian quarter was, inexplicably, full of German restaurants, offering expensive beer and inexpertly grilled Bratwurst. Bands screeched out Christmas carols and locals took selfies in front of the pseudo-European facades.

But the river was beautiful. Still as glass, the buildings and bridges were reflected perfectly in its surface. 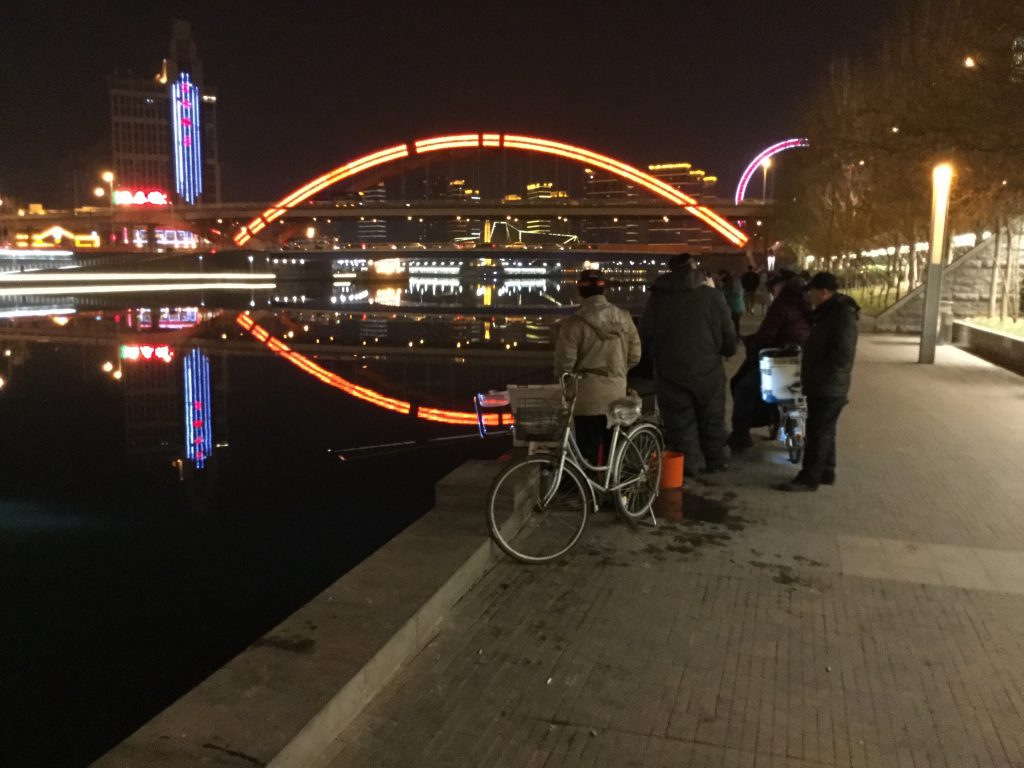 Along the esplanade, middle aged women – known usually as ‘aiyi’s or ‘aunties’ – danced in large groups. Each group stood in military formation beside an enormous speaker blasting crude pop jingles. They danced in perfect step, with the discipline of soldiers, to lyrics which repeated the English word ‘sex’ a lot, staring straight ahead, jaws clenched, unsmiling, keeping time to the frantic beat.

In Chengdu, where I’d lived for much of 2014, these aiyis were a fixture of city life. Their music filled the parks after dark as neighboring dance groups attempted to drown each other out. Occasionally they couldn’t find an electricity supply, and had to resort to petrol generators which roared like a 747.

That’s the sound of a park in China at night – a thousand different kinds of dance music competing with each other over the sound of petrol generators, as the aunties dance on.

It was different in the ancient capital, Xi’an. 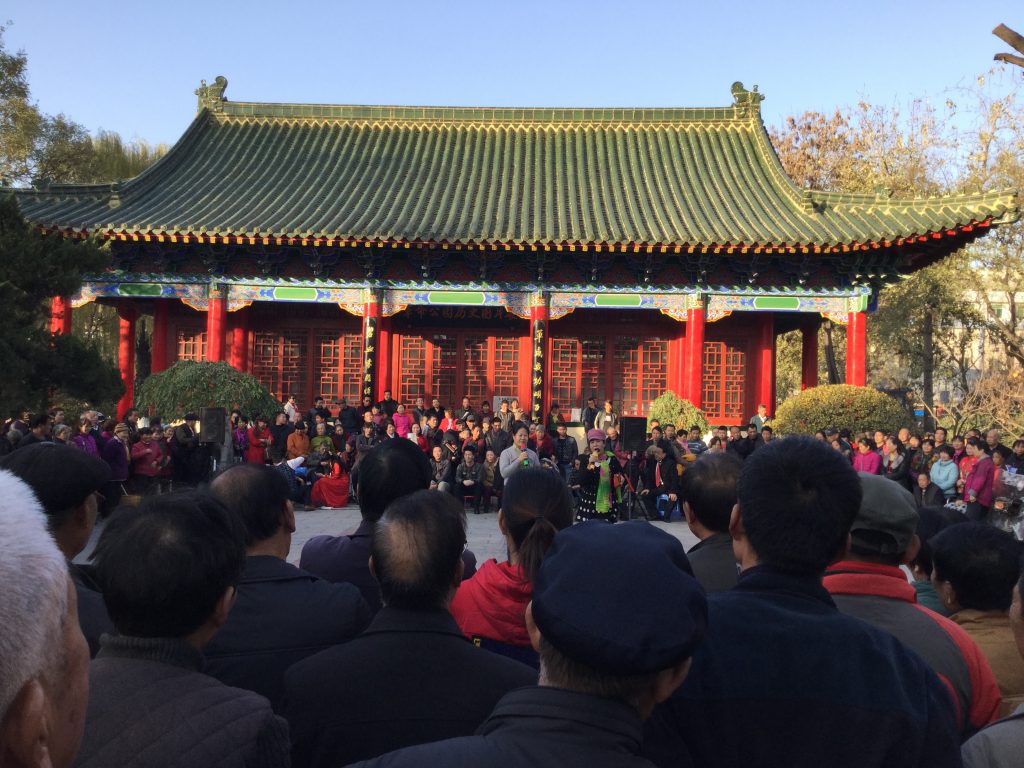 A performance at Revolution Park, Xi’an

A lucky accident had us stumble across Revolution Park on a beautiful clear day. In big cities like Chengdu, Shanghai or Beijing, blue skies are an annual event. Their appearance normally coincides with major political meetings, as the Party commands factories to slam on the breaks so cadres and foreign dignitaries can fill their lungs with clean air.

For two weeks in September, when the G20 was being held in nearby Hangzhou, we had clear skies in Shanghai. People would point their phones upwards and take a photo of this rare phenomenon. Blue sky in China is like a solar eclipse in Europe. We came out onto the street and stared.

There were no dancing old ladies at Revolution Park in Xi’an. Instead, the elderly shopped for husbands and wives for their grandchildren at the marriage market. Rows of grandparents, crushed tightly together, waved A4 sheets of white paper with the descriptions of their unmarried descendant. The descriptions were always short and to the point: ‘Woman. Born 1985. 1.65 meters tall. Seeking man, born 1975 or later. High school education or higher. At least 1.7 meters tall. Must have local work permit.’ 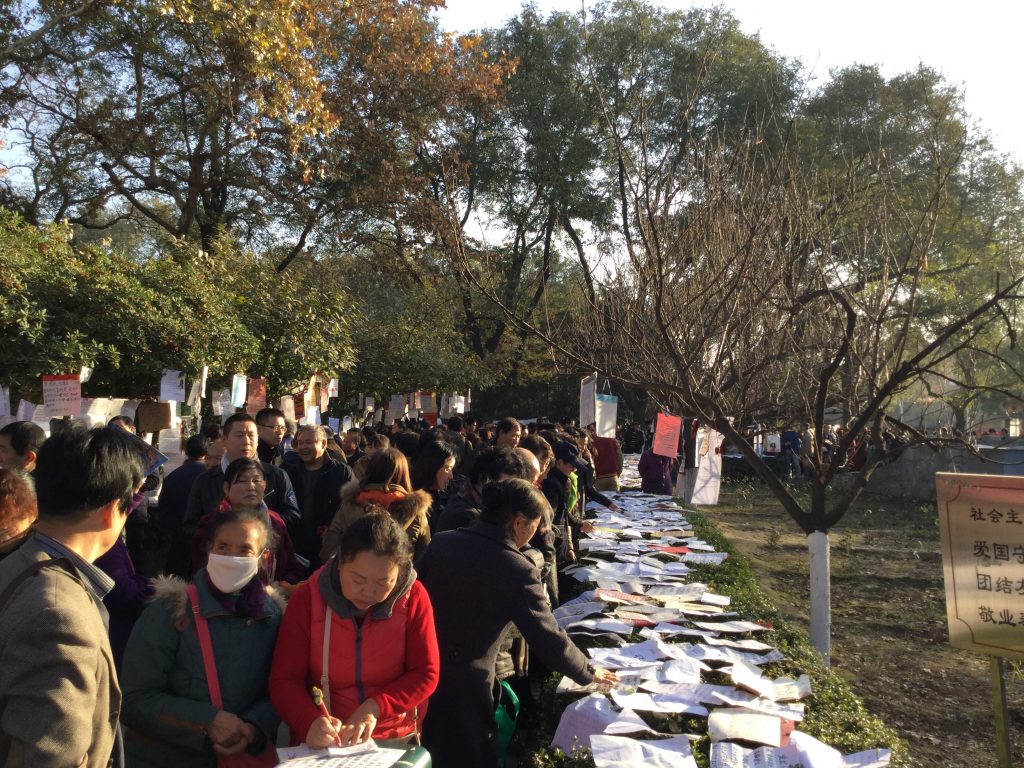 Away from the market various bands and performances bellowed at onlookers. One old man was screaming some ballad into a microphone with a cigarette stained voice that would have done Tom Waits proud.

We found peace and quiet away from the bands and marriage market by a small artificial lake. We were sitting on a stone bench, watching couples frolic about on small boats, when a group of about eight men strode purposefully past us. In the middle of the group was a younger, disheveled looking man, who was walking in an awkward way.

As they brushed by us, I noticed that the young man’s hands were cuffed behind his back, and the two burly men on either side of him were keeping a tight grip on each shoulder.

We’d flown to Xi’an on a whim from the city of Chongqing, by some measured the largest city in China.  City of mountains and rivers in the middle of the country, Chongqing became famous in the West a few years back when the saga of Bo Xilai was making headlines. (It’s funny. When in China, even writing that name would give me pause. Locals have been jailed for less. I’ve been out of the country for less than a week, and instinctively looked over my shoulder when typing these words.)

Unlike neighboring Chengdu, Chongqing seemed devoid of dancing aiyis, and yet the city had other surprises. Stepping out of our hostel one afternoon, we saw the clearly just-butchered remains of two sheep strung up right next to a busy highway. Pedestrians and cars hooned by, seemingly unfazed by the skinned carcasses, the buckets still full of blood, and the pile of wooly skin and fatty organs lying on the concrete.

Aside from freshly butchered sheep and gangsters (read that how you will), Chongqing is also famous for its hot pot. It’s not complex stuff: take a large metal pot of oil, shove in as many chili peppers and numbing Sichuan peppers as you can, bring it to a boil, and then serve alongside raw slices of meat – often including organs – and vegetables (often including lettuce). We remembered an underground (literally) local place from a trip a few years back, and found it again.

The air was thick with spice, the walls stained yellow. We sat among locals, drank watery beer (3.3%) and sweated through a painful yet perversely delicious meal. 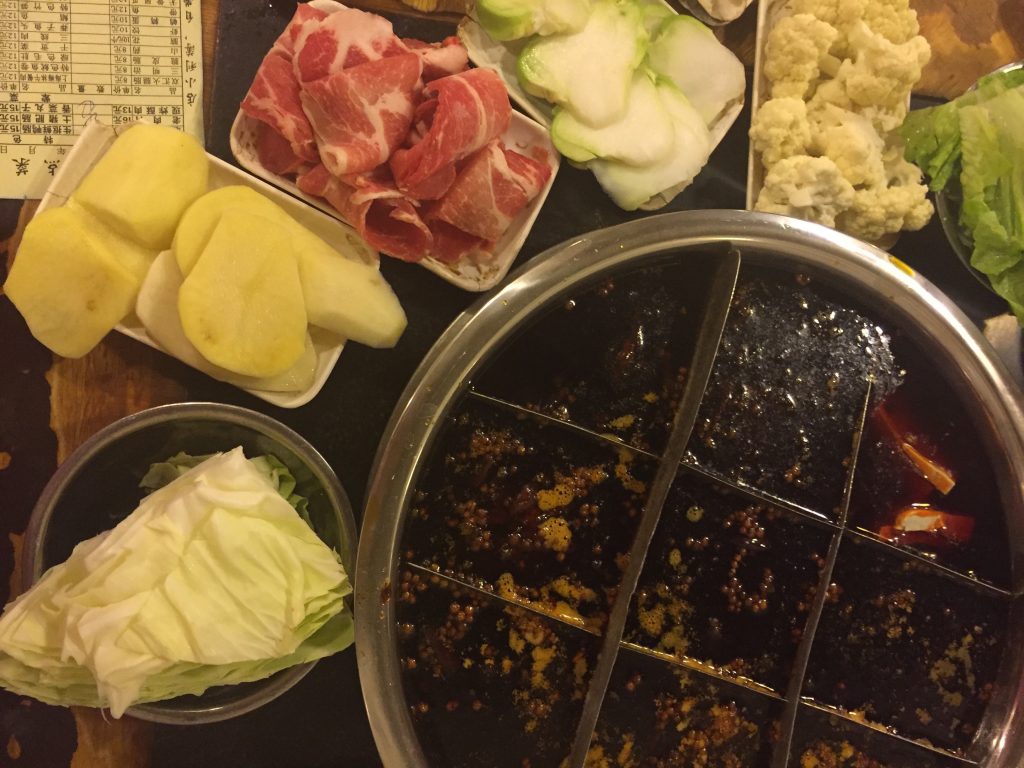 Our flight from Tianjin reached Tokyo just after midnight. The change was instant.  The air is clean. In China we threw out our rubbish in the mornings, in the evenings we’d found the destitute had gone threw it in search of scraps. Neighbors fought, spat, smoked. Motorcycles circled the block, blasting advertisements from makeshift speakers as they searched for antiques to sell to tourists ‘Mao Zedong Badges! Tokens from the Cultural Revolution!’

In Japan, you sort your rubbish into three separate bags. You live inches from your neighbor, yet neither of you makes the slightest sound that could disturb the other. They smile when you walk into a store, and offer directions when you look lost.

From the top of the Tokyo Tower, I watch the lights of the world’s largest city.

Shanghai, Guanzhou, Chongqing, Chengdu, seem equally vast from on high. By their lights are somehow dimmer. The cities somehow less whole, less healthy. That incompleteness is scary, but it is also exciting. Go go for a walk in the park and you could witness an arrest. Step out of your hotel and you could find the main road converted into a makeshift abattoir.

Despite the neon lights, the crowded metro, the rush of pedestrians on every street, Tokyo seems at first glance to be a calmer, gentler place. And its nice to be able to breath the air. 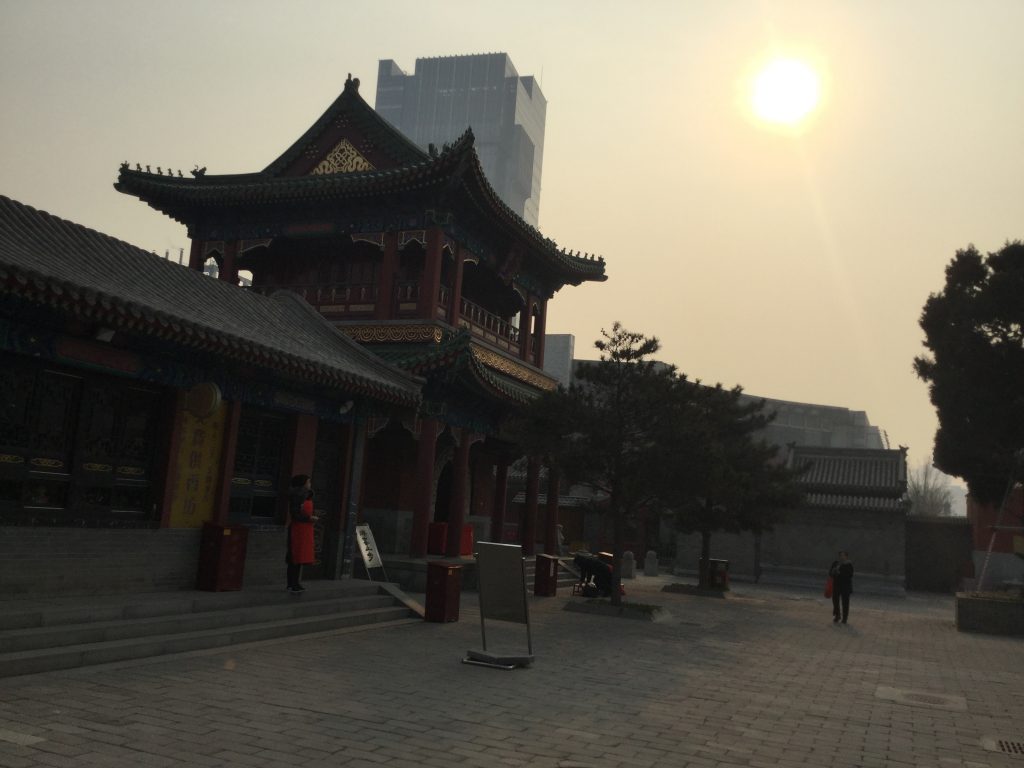 The sun fights through smog in Tianjin